Surgical site infection (SSI) rates are used extensively by hospitals as a basis for quality improvement. A 30-day post-discharge SSI programme for Caesarean section operations has been implemented in Our Lady of Lourdes Hospital since 2011. It has been shown that skin antisepsis and antibiotic prophylaxis are key factors in the prevention of SSI. Using quality improvement methodology, an infection prevention bundle was introduced to address these two factors. Skin antisepsis was changed from povidone-iodine to chlorhexidine-alcohol. Compliance with choice of antibiotic prophylaxis increased from 89.6% in 2014 to 98.5% in 2015. Compliance with timing also improved. The SSI rate of 7.5% was the lowest recorded to date, with the majority of SSIs (64%) diagnosed after hospital discharge. The level of variation was also reduced. However, the continued presence of variation and possibility of lower infection rates from the literature imply that further improvements are required.

Surgical site infection (SSI) rates are used extensively by hospitals as a quality indicator and a basis for quality improvement. Although there is no national SSI surveillance programme in Ireland, a multidisciplinary Caesarean section SSI surveillance programme has been implemented in Our Lady of Lourdes Hospital (OLOL), Drogheda since 2011. The programme involves patient surveillance for SSI for 30 days post-Caesarean section as recommended by the Centers for Disease Control and Prevention (CDC) guidelines1. CDC guidelines are followed with regard to SSI definition and categorisation1. The SSI rate reduced significantly from 14.7% in 2011 to 8.6% in 2014. Most SSIs during these four years were categorized as superficial, apart from two deep incisional SSIs in 2012 and two deep incisional cases in 2013. There were no organ/space SSIs. International literature reports have found an infection rate after Caesarean delivery of 4% to 15%, with National Healthcare Safety Network (NHSN) data reporting a lower infection rate of 2% to 4%.2 Regarding SSI rates up to 30 days post-Caesarean section in other Irish hospitals, Wexford General Hospital reported an SSI rate of 11.6% in 2011 whilst the Rotunda Hospital reported a reduction in the SSI rate from 16% to 4.9% following the introduction of three interventions3, 4.

A prospective study of all women undergoing Caesarean section in OLOL was undertaken from March to September 2015. Both elective and emergency Caesarean section patients were included. Due to the potential for emotional distress, patients were excluded if their baby was stillborn or died or if the mother and/or baby were transferred to another hospital.

The surveillance methodology was based on the standardised method used by the NHSN1. The NHSN adopted the National Nosocomial Infection Surveillance (NNIS) System developed by the CDC2. Surveillance data was collected using the OLOL Maternity Information System, locally developed surveillance forms completed in the operating theatre and a post-discharge patient questionnaire. A 30-day period of surveillance from date of operation was undertaken as recommended. Patients who developed an SSI, whether diagnosed during the first or subsequent admissions, in the Emergency Department or in the Outpatients Department were captured via an inhouse surveillance programme. In the event of a patient reporting SSI in the post-discharge questionnaire, the SSI diagnosis was confirmed by contacting the patient’s healthcare provider (e.g. GP or public health nurse).

The pre-operative skin antisepsis was changed from povidone-iodine to chlorhexidine-alcohol in February 2015. Education and training was provided for all obstetric and theatre staff. The prophylactic antibiotic regimen in OLOL is based on international best practice, and is recommended for all patients undergoing Caesarean section.7-9 It should be administered within 60 minutes before incision5,7. The regimen is a single dose of cefuroxime 1.5g IV bolus and metronidazole 500mg IV infusion. For patients with penicillin allergy, the alternative regimen is a single dose of clindamycin 900mg IV infusion and gentamicin 5mg/kg IV infusion. For elective cases, cefuroxime and metronidazole are administered by the anaesthetist in theatre while clindamycin and gentamicin are started on the ward due to the longer infusion time required. For emergency cases, prophylaxis is started on the Labour Ward by the obstetric team as soon as the decision is made to proceed to emergency Caesarean section.

Regarding quality improvement methodology, the patient’s journey from admission to the operating theatre to the recovery room was process mapped to identify all key steps and stakeholders. In addition, theatre staff mapped the stage at which each anaesthetist commenced antibiotic prophylaxis over 2 weeks in an effort to identify the optimal stage for antibiotic administration. Weekly feedback on the compliance with the choice and timing of antibiotics was provided by means of run charts displayed in theatre.

A series of quality improvement ideas were tested using Plan-Do-Study-Act (PDSA) cycles. Education sessions were provided for the obstetric and anaesthetic teams. SSI posters designed for staff and patients were displayed in all clinical areas to increase awareness of the programme. Posters summarising the recommended surgical antibiotic prophylaxis choice and timing were displayed in all theatres. These were colour-coded red and green to highlight the recommendations for penicillin allergy. An internal email was issued to alert staff that the study had commenced. Theatre forms were amended to name the four recommended antibiotics for prophylaxis to promote compliance. Initially, start time of each antibiotic administered was recorded and finish time was calculated. Later, based on anaesthetist feedback, both start and finish time were recorded. The HSE Safe Surgery Checklist was amended to include an additional question on surgical prophylaxis at the “sign in” section (before induction of anaesthesia) as well as at the “time out” section (before skin incision).

A driver diagram was developed, which outlined the key primary and secondary drivers for the study. 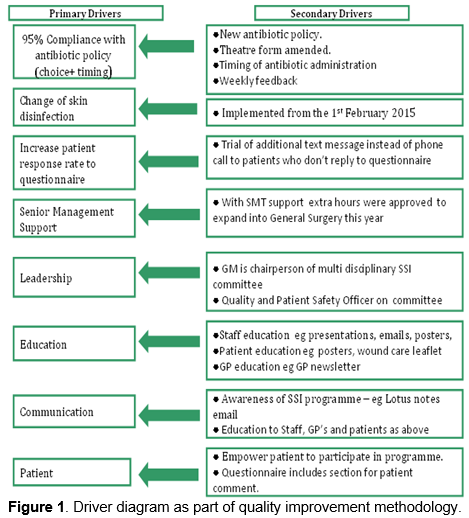 Choice of agent administered for surgical antibiotic prophylaxis was recorded for 551 cases, of which 543 (98.5%) were compliant with the local policy. In total, 91% of patients received cefuroxime and metronidazole and 6% received clindamycin and gentamicin. An additional 1.5% of patients received an alternative appropriate regimen based on the clinical situation, for example, benzylpenicillin, gentamicin and metronidazole for pyrexia in labour prior to emergency Caesarean section. 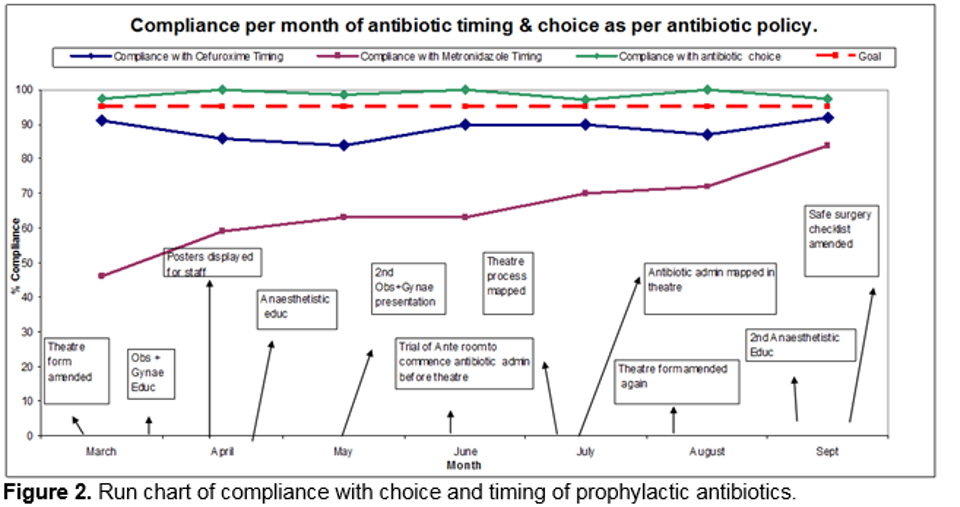 A total of 42 patients (7.5%) developed an SSI during the study, of which 39 were categorised as superficial (infection involving the skin and subcutaneous tissue), 1 as deep incisional (infection involving the deep soft tissue of the incision e.g. muscle and fascial layers) and 2 as organ/space (infection involving any part of the anatomy e.g. organs or space). The majority of SSIs (64%) were diagnosed by the patient’s GP.  The control charts illustrated in Figure 3 and Figure 4 below outline the monthly SSI rate and level of variation over the study period in 2015 compared to 2014. 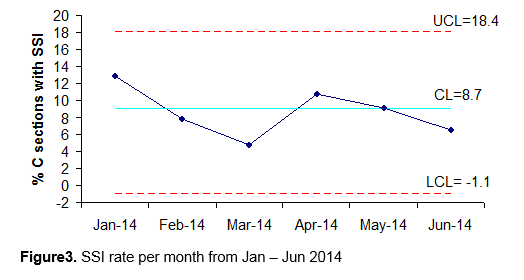 The SSI rate for 2015 reduced to 7.5% (7 month data) compared to 8.6% in 2014 (6 month data) and 14.7% in 2011 (10 month data). This is the lowest SSI rate achieved in OLOL to date. The authors consider that the quality improvement approach and resultant active engagement of all personnel involved in the care of Caesarean section patients was central to this success. The control charts comparing monthly SSI rates for 2014 and 2015 highlight a reduction in the median SSI rate and level of variation in 2015, indicated by the narrowing of the control limits. This demonstrates that the process has become more reliable. International literature reports have found an infection rate after Caesarean delivery of 4% to 15%, with similar rates published by Irish hospitals.2-4. Although the reduction in the local SSI rate is very positive and was a significant achievement, the continued presence of variation and possibility of lower SSI rates from the literature implies that further improvements are required.

It is well documented that good compliance with a number of key recommendations, particularly skin antisepsis and antibiotic prophylaxis, can significantly reduce the SSI rate5,6,10. The quality improvement methodology applied to this study aimed to reduce the SSI rate by optimising skin antisepsis and increasing compliance with surgical antibiotic prophylaxis.

Process mapping was also used in an effort to determine the optimal time of administration of prophylactic antibiotics. Traditionally, it has been administered just prior to skin incision, which works well for antibiotics administered quickly as an IV bolus. However, for an IV infusion, the timing is considered in compliance only if the IV infusion is completed within 60 minutes prior to skin incision. Achievement of correct timing for IV infusions required a significant change in practice. The correct timing of metronidazole in Theatre increased gradually over the time period of the study as a number of different PDSA cycles were tested.

The importance of correct timing of surgical antibiotic prophylaxis has also been highlighted in a number of other studies. Toltzis et al, 2014, reported the establishment of a quality improvement collaborative in 8 paediatric hospitals in Ohio, which introduced an SSI reduction bundle composed of three elements: prohibition of razors for skin preparation, chlorhexidine-alcohol use for skin antisepsis and correct timing of prophylactic antibiotic administration12. Correct timing of prophylactic antibiotics significantly improved from 39.4% to 78.4% (P < 0.001). The achievement of zero SSIs per centre in a given month was associated with achievement of perfect timing of prophylactic antibiotics for that month (P < 0.003). The overall SSI rate across the collaborative reduced from 4.48% to 1.89% after the introduction of the SSI reduction bundle. A study by Goede et al, 2013, of 760 patients with SSI found that timing of surgical antibiotic prophylaxis for metronidazole, cefazolin, levofloxacin and clindamycin was non-compliant with local policy in 84.5% of cases13.

Regarding study limitations, the local SSI rate was likely influenced by factors outside of the control of the study. For example, the highest number of SSI cases occurred in July, the month in which the national NCHD rotation takes place. The HSE Safe Surgery Checklist amendment was implemented at the end of this study and it is anticipated that it will have a positive impact on the SSI rate going forward. The SSI surveillance committee plan to continue the quality improvement programme for Caesarean sections in 2016 to ensure sustainability of the improvements to date and to attempt to further reduce the SSI rate.

The authors would like to thank all OLOL SSI committee members for their assistance with the programme. Thanks also to colleagues in Wexford General Hospital for advice in setting up this programme. Finally special thanks to Dr Valerie Jackson, Surveillance Scientist in the Rotunda Hospital with for all her invaluable support with this work.