In 2015, The Department of Health published the first annual report of the “National Healthcare Quality Reporting System.” Connolly Hospital was reported to a mortality rate within 30 days post-Acute Myocardial Infarction (AMI) of 9.87 per 100 cases which was statistically significantly higher than the national rate. We carried out a retrospective audit of patients who were HIPE-coded as having died within 30 days of AMI from 2011-2013 and identified 42 patients. On review, only 23 patients (54.8%) were confirmed as having had an AMI. We identified 12 patients who had AMI included on death certificate without any evidence for same. If the 22 patients incorrectly coded were excluded, the mortality rate within 30 days post-AMI in CHB would fall to 4.14 deaths per 100 cases, well below the national average. Inaccuracies of data collection can lead to erroneous conclusions when examining healthcare data.

Introduction
Acute Myocardial Infarction (AMI) is one of the leading causes of death in Ireland. The diagnosis of AMI, as defined by the ESC/ACCF/AHA/WHF, requires the presence of raised cardiac biomarkers along with one of the following: symptoms of ischaemia, diagnostic ECG changes, imaging evidence of new loss of viable myocardium, or new regional wall motion abnormality, or the identification of thrombus by angiography or autopsy1. The Hospital In-Patient Enquiry (HIPE) scheme has been established in Irish hospitals as the principal source of national data on discharges from acute hospitals. HIPE data is created by an administration team within the hospital which are responsible for coding. It collects demographic, clinical and administrative data on discharges from, and deaths in, acute public hospitals. HIPE uses coding systems such as the International Statistical Classification of Diseases and Related Health Problems, Tenth Revision, Australian Modification (ICD-10-AM) to assign primary and subsequent diagnoses to patients’ inpatient stay. It gathers its information for coding from sources such as clinical notes, discharge summaries and death certificates.

In March 2015, The Department of Health published the first annual report of the “National Healthcare Quality Reporting System” (NHQRS)2. This was designed to report the quality of healthcare provided across all sectors of our system. The indicator used as a measure of acute cardiac care was in-hospital mortality within 30 days of admission for Acute Myocardial Infarction (AMI) as it is a recognised outcome measure of acute care quality, and is one of the Organisation for Economic Co-operations and Development (OCED) Health Care Quality Indicators3. The report found that Ireland as a whole performed well with an average of 6.8 deaths per 100 cases. The average OCED in-hospital mortality rate following AMI is 7.9 deaths per 100 cases. Connolly Hospital was one of three hospitals reported to have age-sex standardised mortality rates within 30 days post-acute myocardial infarction (AMI) that were statistically significantly higher than the national rate at the 95% confidence level with a rate of 9.87 deaths per 100 cases (Figure 1)2. Our audit aimed to assess the accuracy of the findings.

Methods
Our audit was carried out by retrospective chart review. Patients to be audited were identified by the hospital HIPE department by searching for patients who had been labelled with a primary diagnosis of AMI and had died within 30 days of this diagnosis between 2011 and 2013. This the method that such patients would have been identified by the HPO. We then examined these patients’ charts and collected baseline characteristics, along with the clinical details of their admission. It was determined by a consultant cardiologist if the patient was correctly diagnosed as having suffered AMI during admission. We also examined clincial features such as medical comorbidities and cause of death via chart review and evaluation of death certificates. 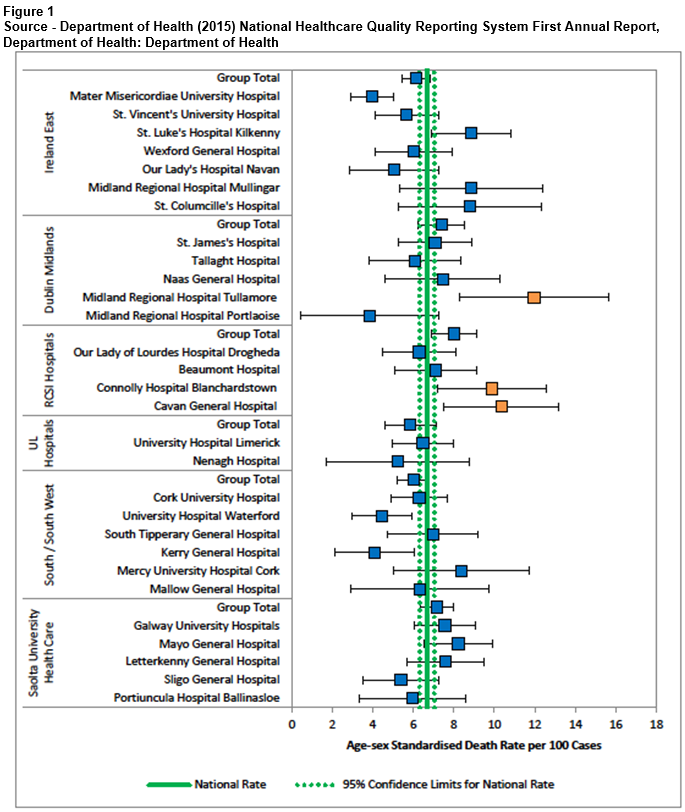 Results
From a period of February 2011 to December 2013, we identified 42 patients who were classified by HIPE as having had a primary diagnosis of AMI with mortality within 30 days. Twenty-one (50%) were male and 21 (50%) were female. Average age was 79.3 years. On chart review, only 23 (54.8%) of these patients were confirmed as having had an AMI during the course of their admission, 22 by chart review and one by post-mortem. Of these patients who were identified as having being diagnosed with AMI, 20 (87%) died within 30 days of their AMI. The average time to death was 2.89 days. A breakdown of patient primary diagnoses can be seen in Figure 2. 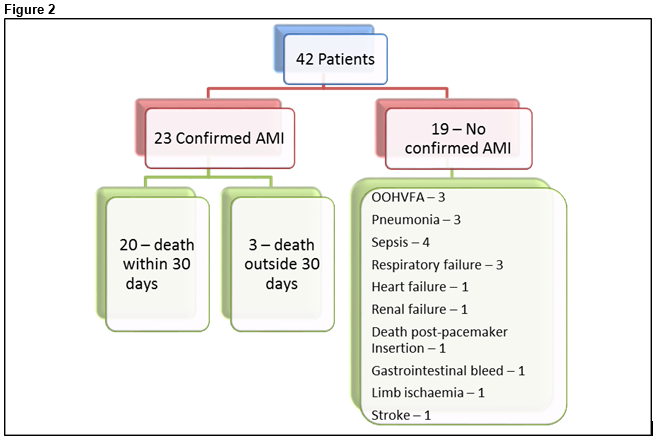 In those without AMI, the most common primary diagnosis was sepsis (21.1%) followed by out of hospital ventricular fibrillation cardiac arrest (OOHVFA) (15.8%), respiratory failure (15.8%) and pneumonia (15.8%). Comparison of the group of patients with confirmed AMI versus those without are seen in Table 1. It can be seen that patients who died post-AMI were more likely to have been seen by cardiology services (87% vs 57.9%), were more likely to have had palliative care involvement (60.9% vs 36.8%) and to have been determined not for resuscitation (78.3% vs 42.1%). On examination of the death certificates of patients included in the audit, we found that twelve patients had AMI placed as a cause of death (10 primary cause, two antecedent cause) despite having not suffered AMI during their hospital admission. On chart review, we deemed that in these patients the actual cause of death was sepsis (n=4), ventricular fibrillation arrest (n=4), cardiac arrest post pacemaker insertion (n=1), respiratory failure (n=1), heart failure (n=1) and gastrointestinal bleed (n=1).

There were four patients included who had suffered out of hospital ventricular fibrillation cardiac arrest (OOHVFA). Although ischaemic heart disease and AMI is the most common reason for OOHVFA, other causes such as cardiomyopathies and channelopathies must be considered. Of the four patients with OOHVFA, three had post-mortem examinations. One was found to have suffered AMI, one had myocardial fibrosis leading to arrhythmia and one was found to have a ruptured berry aneurysm and intra-cranial haemorrhage. The other patient suffering OOHVFA had AMI placed as primary cause of death despite lack of confirmation via clinical features or post-mortem.

Discussion
The HIPE scheme was developed by the Economic and Social Research Institute (ESRI) and began in 1971. It developed into a computer-based system designed to gather both clinical and administrative data from discharges and deaths in acute-care beds with updated reports published from 1990 onwards3. Currently the HIPE dataset is monitored by the HPO, an administrative branch of the HSE. With the development of software-based information came upgrades in the method that coding was recorded to ICD-10-AM4, along with a detailed training syllabus outlined by the Healthcare Pricing Office (HPO)5. We believe that the primary issue with the data collected in the 2015 report is in the coding process for patients. A HIPE discharge record is created when a patient is discharged from (or dies in) hospital. A primary diagnosis is assigned to the patient by a lay coder through analysis of patient records; clinical notes, discharge summary or if the patient dies, from post-mortem or death certificate. If there is any ambiguity as to the diagnosis then the medical team may be contacted. If incorrect information is entered into patient records by medical staff, or incorrect information collected by the coding team then inaccuracies in HIPE data become an issue.

In the case where primary diagnosis is not clear from chart review, the death certificate may be used by the HIPE office to clarify. We believe that this is the most common reason patients were incorrectly included in our search criteria. As stated, we identified 12 patients who had AMI included on their death certificate without any evidence for the same via chart review or post-mortem. If AMI is used incorrectly on a death certificate as a surrogate for another cause of death such a cardiac arrest then AMI becomes the primary diagnosis and the death essentially occurs on day zero post-AMI and these patients will appear within our search parameters. Indeed, non-consultant hospital doctors have been discouraged to avoid terms such as cardiac arrest and dementia on death certificates. These terms can and should be used (with an underlying cause when using cardiac arrest) when appropriate.

There is however no excuse for example, for a medical practicioner mislabelling the cause of death as AMI in a case of fatal gastrointestinal bleeding based on abnormalities in cardiac biomarker levels measured incidentally as occurred in our audit. The diagnosis of AMI remains a combination of biomarker abnormalities and a compatible clinical scenario. The NHQRS report does allow that “inconsistencies in the quality of the data gathered in different hospitals” can contribute to an above normal mortality rate. The responsibility for determining the primary diagnosis, whether that be the primary diagnosis within the chart, or the principal cause of death on a death certificate, clearly lies with the medical practitioner. The HPO itself states in their coding standards that: “The responsibility for recording accurate diagnoses and procedures, in particular principal diagnosis, lies with the clinician, not the clinical coder”7. However, allowances on both sides need to be made. Both clear and accurate documentation by the clinicians, and a concerted effort to determine diagnoses from this documentation by HIPE coders is required to ensure that pateints are correctly coded.

Although we are unable to determine for certain that the patients we have audited are the same patients included in the NHQRS report, we believe that the same search filters (namely primary diagnosis of AMI and death within 30 days of diagnosis) were applied to the HIPE data by the HPO as by ourselves. Indeed CHB had 483 cases on AMI in the report, and a mortality rate of 9.87 per 100 cases would lead to total number of 49 deaths. We identified 42 patients from our search which would fall into the 95% confidence interval of mortality rate within the hospital as per the NHQRS report. However, it could be argued that the matching of the two groups was not necessary, as our audit has independently shown significant flaws in the process of gathering data from the HIPE system regardless of whether the exact same cohort of patients were used.

If we were to exclude the 19 patients that we found not to have suffered AMI and the three patients who did not die within 30 days of their AMI, the mortality rate within 30 days post-AMI in CHB would fall to 4.14 deaths per 100 cases. Although this is only a crude measurement and is not age-sex adjusted, this falls well below both the European average (7.9 deaths per 100 cases) and the Irish average (6.8 deaths per 100 cases) and would compare very favourably against other hospitals in Ireland. Of course however, the inaccuracies we have identified are most likely present in other hospitals too.

Analysing the performance of our healthcare system is imperative to provide a quality service to our patients and to improve our healthcare service. The analysis of data however is only useful if the data itself is accurate. We believe that the use of in-patient mortality following admission for AMI is a valid and useful indicator of acute cardiac care. Our audit showed however, that many of the patients coded as having had a primary diagnosis of AMI had not in fact suffered AMI, and some of those who had, did not die within 30 days of the event, therefore the analysis of mortality within this group is flawed. It would be our hope that the discrepancies shown in this audit would feed back to the HSE to enable a more accurate data-entry in the future and also to NCHD training programmes with instruction in particular on the importance of the accurate documentation of diagnoses and the accurate completion of death certificates.

Conflict of interest:
The authors have no conflicts of interest to declare