We report a radiologic finding on magnetic resonance imaging (MRI) of the brain of two cases of progressive multifocal leukoencephalopathy (PML) of hypointense signal of subcortical U-fibres on susceptibility weighted (SW) sequence. The first case is a 50-year-old man recently treated with chemotherapy including rituximab for non-Hodgkin's lymphoma. The second case is a 64-year-old woman with human immunodeficiency virus (HIV) infection. Iron deposition is a likely causative factor. We propose that SWI may be especially useful in the assessment of indeterminate cases to reduce the likelihood of a missed diagnosis of PML.

Progressive multifocal leukoencephalopathy (PML) is a severe demyelinating disease of the brain resulting from reactivation of JC virus in the setting of immunosuppression. We report two cases of PML with hypointense signal of subcortical U-fibres on susceptibility-weighted (SW) sequence of magnetic resonance imaging (MRI) of the brain. We propose that SWI may be of diagnostic value in PML. 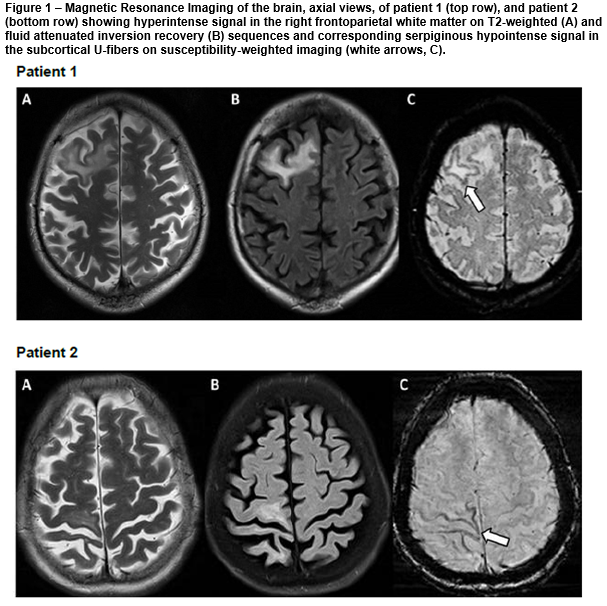 We present one case of rituximab and chemotherapy-associated PML and one case of HIV-associated PML-IRIS, both demonstrating low intensity SWI signal of subcortical U-fibres. These SWI abnormalities have been reported in natalizumab-associated PML in patients with multiple sclerosis1. The American Association of Neurology (AAN) diagnostic criteria for PML proposed in 2013 do not include SWI abnormalities2. Diagnosing PML may prove difficult due to a wide range of differential diagnoses including cerebral lymphoma, glioma, ischaemia, vasculitis, chemotherapy-induced leukoencephalopathy and opportunistic infection.

The histopathologic triad in PML includes multifocal demyelination, enlarged oligodendroglial nuclei and enlarged bizarre astrocytes2. JC virions are commonly detected in the nuclei of infected oligodendrocytes2. It was reported that oligodendrocytes are the predominant iron-containing cells in the brain and are abundant within white matter tracts6. Cellular injury may lead to release of free iron which generates reactive oxygen species that causes oxidative cell death7

In conclusion, we propose that SWI may be included in routine MR imaging protocols for the assessment of possible PML. However, the sensitivity and specificity of this sign have yet to be formally studied. This finding may prove especially useful where CSF JC virus result and / or clinical features may be equivocal, hence reducing the likelihood of a missed diagnosis of PML.

All authors report no conflicts of interest in the preparation of this case series.