A 14 year old boy presented with a week-long history of non-bilious vomiting. He reported mild intermittent central abdominal pain and normal bowel habits. During the previous four months, he had two similar presentations with one hospital admission. He had an open appendicectomy seven years previously. His initial examination was normal. His bloods demonstrated an acute kidney injury and metabolic alkalosis. On day 3 of admission, he developed bilious vomiting. An abdominal ultrasound revealed a reversed relationship between the uppermost superior mesenteric artery and vein (Figure 1). This is highly specific for small bowel malrotation. To confirm the diagnosis, an upper gastrointestinal contrast study was performed and it showed a markedly abnormal duodeno-jejunal flexure lying low and anterior to the L4/L5 lumbar vertebrae. The patient was urgently transferred to a tertiary paediatric surgical centre and had an open Ladd procedure. Multiple adhesions and the unusual finding of a para-vesical hernia were identified during the surgery. No bowel ischemia was identified.

Malrotation is a well described congenital anomaly with an incidence of approximately 1 in 500 live births1. Seventy-five percent of symptomatic cases occur in the neonatal period and the majority of these present with intestinal volvulus. Almost 90% of symptomatic cases present before their first birthday2. The incidence in adults is reported to be as low as 0.2-0.5%3.  Our patient’s four-month history of intermittent vomiting was likely due to recurrent volvulus resulting in intermittent subacute small bowel obstruction. Laparotomy and laparoscopic surgeries are both feasible with recent increasing numbers in the latter. Numerous pathologies have been associated with malrotation including internal abdominal hernias which represent 1% of all hernias with para-vesical herniae accounting for less than 4% of internal abdominal hernias4. A para-vesical hernia was identified during our patient’s surgery. A large amount of small bowel was trapped in a peritoneal pocket in his pelvis, which was repaired. Seven years previously our patient presented with classical peri-umbilical pain that moved to the right iliac fossa and had an open appendicectomy with confirmed appendicitis misplaced infra-hepatically. However, the Lanz incision is a small incision and thorough exploration of the bowel position would have been impossible. 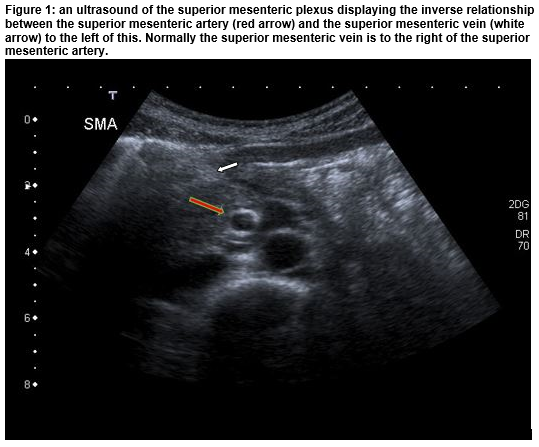 In summary, intestinal malrotation may present acutely with bilious vomiting in the infant but also uncommonly, it can present chronically over months in older children. This can lead to delays in diagnosis. Malrotation complicated by volvulus can result in extensive bowel ischemia therefore there is an urgency to diagnose this condition to avoid this complication. This case highlights the importance of revisiting your diagnosis if symptoms persist or recur. Although rare, a late presentation of intestinal malrotation should be considered in the differential diagnosis of recurrent vomiting in children.