We prospectively studied acute Achilles tendon rupture in patients over a two 2-year period and reviewed the causes, outcome and complications. There were 53 patients included with acute Achilles rupture with minimum follow up period of 6 months. We compared the outcomes including infection rate and Boyden score between the two groups repaired by Polydioxanone and Polyester respectively. All infected cases had a suture repair using the polyester suture. The difference in the infection rate was highly significant between the 2 groups (p=0.001). All 34 patients (100%) in the PDS group had good / excellent results based on the Boyden clinical assessment. Conversely, only 16 patients 9(68.4%) had good or excellent results IN Polyester repair group. Patients treated with a non- absorbable suture (ethibond) material for repair had a higher incidence infection and worse Boyden scores than the absorbable PDS group.

Introduction
Tendons are an important link in the locomotive system, the main physiological function of which is to transmit forces that elicit characteristic mechanical responses 1,2. The Achilles tendon is one of the most common tendon injuries in the adult population. It is formed by tendon of soleus, medial and lateral gastrocnemius muscles. Rupture occurs more commonly in males most frequently in the age group of 30 to 50 years. The incidence of this injury is increasing as ageing adults continue their participation in high-demand sports1. The incidence reported in literature is 18:100,0009. The risk factors include episodic athletes and the use of quinolones or steroids. Clinically, diagnosis is made on the basis of a characteristic history associated with a palpable gap and a positive Thompson test. If the physical examination is equivocal, ultrasonography or magnetic resonance imaging can be used to confirm the diagnosis3.

Method
The patients included in this study came to our regional general hospital with an acute rupture of Achilles tendon. They were treated by two orthopaedic surgeons. Both surgeons used an identical surgical technique apart from differing core sutures for tendo-achilles repair and the post-operative rehabilitation protocol were identical.  The study period was 2 years and operative cases were included provided they met the inclusion criteria. The inclusion criteria were acute rupture, patients 18 years or older and with complete Achilles rupture. Fifty-three patients were included in our study age ranging from 20 to 75 years of age. There were 35 male and 18 female patients. The operative technique used consisted of patients placed prone on the operating table and above knee tourniquet was used. A medial tendo achilles incision, was used 8-10 cm in length avoiding the sural nerve. The para-tenon was preserved and opened to reach the Achilles tendon. Edges were minimally debrided if required. The Achilles tendon was repaired using the following suture material: Polydioxanone (1 PDS) or Polyester (5 ethibond). A 2-strand modified Kessler technique was used in all cases (figure 1). An epitendinous repair was also done, as an epitendinous suture not only improves gliding, but adds to the tensile strength of the repair and reduces rate gap formation, which is often the initial event in repair failure. A key factor determining the strength of repair of a flexor tendon at the time of surgery is the grip of the suture in the tendon, and a 'gripping' core suture as in modified Kessler technique prevents the suture pulling out of the tendon. The para-tenon was repaired and skin closed using nylon. Short leg below knee fiberglass cast with plantar flexion of 40 degrees equinus position. The cast is brought out of equinus over six 6 weeks gradually every 2 weeks. The patients were discharged the next day after physiotherapist had seen them and taught the use of crutches. The patients were regularly seen in the OPD at 2, 4 and 6 weeks’ interval. At these visits the cast was removed wound reviewed, sutures removed at 2 weeks and slight correction of equinus position cast towards neutral on each consecutive visit. After 6 weeks they were put in orthotic ski boot, partial weight bearing permitted and further physiotherapy arranged. We used the Boyden assessment (Table 1) to assess the functional outcome of the repair of the Achilles tendon.   The Boyden score grades clinical factors such as pain, appearance, footwear restrictions, and patient satisfaction8. The score was determined in clinic at the 6 month follow up visit 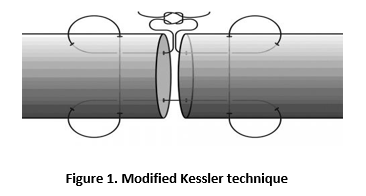 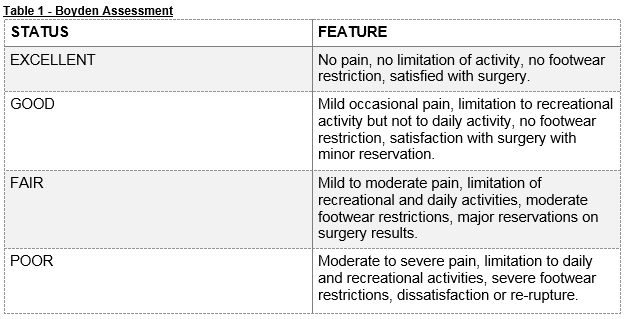 There were no re-ruptures recorded in either group at the 6-month follow-up. Overall, there were 7 complications including 6 wound infections. Of these 6 infections, 2 were superficial and 4 were deep infections. The superficial infections were treated by oral antibiotics and the deep infections had course of intravenous antibiotic treatment. One of the deep infections required re-operation for debridement and reclosure. Interestingly, all infected cases had a suture repair using the polyester (ethibond) suture. There were no infections in the PDS repair group. The difference in the infection rate was highly significant between the 2 groups (p=0.001).  There was no difference in the mean ages of the infected (45.7 years (SD11.5)) compared with the non-infected cases (44.2 years (SD12.1)) (p=0.78). There was no significant association with infection and gender (p=0.67) or sports as cause of rupture (p=0.53). One patient in the PDS group developed deep vein thrombosis (DVT) post –operatively but this was not statistically significant. All 34 patients (100%) in the PDS group had good or excellent results based on the Boyden clinical assessment. Conversely, only 16 patients 9 (68,4%) had good or excellent results. The difference between the groups was again highly significant (p=0.001). Interestingly, all 6 cases with fair to poor results had also an infection. The above mentioned results have been described in tabular form in the following (Table 2). 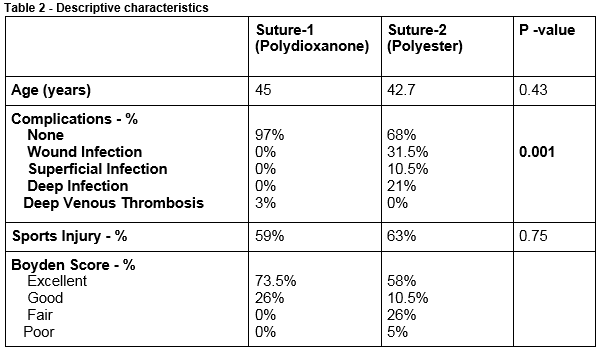 Statistical analysis was performed using SPSS software, version 21. Statistical significance was defined as p<0.05.  Either chi square test or Fisher exact tests was used to investigate the distribution of categorical variables depending on the size of each groups., The means of the ages were compared using using Student's t-test, which were not categorized.

Discussion
Achilles tendon rupture is a common debilitating orthopedic condition and operative treatment has demonstrated lower re-rupture rate but higher wound complications than non-operative management. In this study we have rejected the null hypothesis and demonstrated that the use of a non-absorbable suture can cause higher wound infection rates and lower patient satisfaction.In our study group we observed both the sports related and non-sports related injury mechanism as the cause of the ruptured Achilles tendon. Particularly susceptible are athletes who begin training without adequate warm-up or resume training after a period of rest8,10. There is a group of clinical investigators that have demonstrated results of non-operative treatment that were similar to those of surgical repair11,12,13,24. But in an increasingly athletic patient population and improvements in surgical technique, many have favored operative intervention in recent clinical studies.  Operative repair has been shown to restore tendon length, lower the re-rupture rate and result in better functional outcomes (12,14, and 15). According to the literature the rate of re-rupture was consistently higher among non-operatively treated patients as compared with operatively treated patients17,25.

Generally, the presence of suture material in a surgical wound is known to cause adverse effects on the local tissue condition and increases the susceptibility to infection20. Surgical sutures potentiate infection when necrotic or devascularized tissue, haematoma or dead space is caused by tissue damage or when poor surgical technique is used. One has to decide on the basis of the nature of injury and wound, type of tissue being dealt with, local and general conditions of the patient and the characteristics of different suture materials as to which type of suture material is to be used.

PDS is a Polydioxanone synthetic monofilament which is absorbable. The mechanism of absorption is hydrolysis. It has excellent passage through the tissue with minimal tissue trauma. About 70% of tensile strength remains at 2 weeks, 50% at 4 weeks, and 25% at 6 weeks. As compared to Polyester (Ethibond) sutures which are non-absorbable synthetic braided multifilament sutures composed of polyethylene terephthalate. The polydioxanone has many advantages over polyester including its absorbable properties and that it is monofilamentous. The use of absorbable sutures may avoid problems, associated with long-term foreign body implantation, such as excessive fibrosis and stitch granuloma that could interfere with the smooth gliding of tendon repairs23. There is a study in which the highest and the lowest tendon holding capacities were found with 2 PDS and 2 Ethibond sutures, respectively18.  The tendon holding capacity of the suture material is an important factor for the strength of the repair. Among the tested suture materials in a study, 2 PDS was found to have the highest tendon holding capacity18. In a study by Matthias Gebauer et al.  they advocated that PDS be use for achilles tendon repair 22. According to literature Monofilament sutures are much less prone to potentiating infections than multifilament sutures, because of decreased bio adherence of the bacteria and improvement in the ability of phagocytic cells to reach bacteria on or within the sutures19. There was no re-rupture in our study but the literature shows 10-12 % re-rupture rate post surgical repair. This can be due to small sample size or short follow up. There are few shortcomings in our study including small sample size. It was not blinded or randomized. We are going to continue this project further in light of increasing the sample size and the duration of follow up to achieve more conclusive results. The conclusion on the basis of our study we suggest that the surgical repair with monofilament non-braided absorbable suture polydioxanone (PDS) is superior than Ethibond as it results in significantly lower post-op wound complications and higher patient Boyden scores.

Conflict of Interest:
There is no conflict of interest.