Vascular complications of pulmonary vessels post-transplant are rare but are associated with high morbidity and mortality. We describe the first published case of surgical management of pulmonary vein stenosis complicated by early thrombosis post single lung transplantation. This report describes early diagnostic techniques and subsequent management options in such patients where pulmonary vascular complications are a potential.

Case Report
A 41-year-old non-smoker male with end-stage IPF, underwent an off-pump, single left lung transplantation. Twenty-three per cent of his overall lung perfusion was contributed by the left lung. The recipient initially progressed well and was extubated one day post-operatively. On day three, the patient developed type-one respiratory failure and produced pink-frothy sputum. Left-sided interstitial markings on chest x-ray was noted. A CT Thorax with contrast demonstrated a filling defect in the left lower pulmonary vein. Emergent surgery via a redo left hemi-clamshell incision was performed. Cardiopulmonary bypass via the right groin was initiated. The left pulmonary artery and atrium were clamped. One litre of cold Perfadex was infused antero- and retro-gradely. No flow to left inferior pulmonary vein (LIPV), due to thrombus in situ, was noted. Thrombectomy was performed. Direct cannulation of the LIPV allowed more Perfadex to be infused. No further debris was washed from the left atrium retrogradely through the pulmonary arterial vasculature. 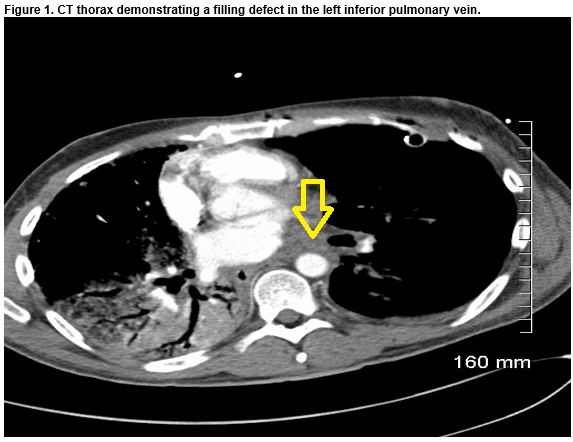 A deficient anterior wall of the LIPV was noted. Pericardium was used to augment the diameter of the vessel. Direct pressure monitoring out-ruled any meaningful gradient across the anastomosis. The left lung was re-inflated, de-aired and the patient was weaned from cardiopulmonary bypass. The patient recovered, was anticoagulated with warfarin, and discharged five weeks post lung transplantation.

The allograft failed to function optimally. The patient remained dyspnoeic on two litres of oxygen at discharge. CT demonstrated mediastinal shift to the right and echocardiography indicated right-sided pressures of 30mmHg plus right atrial pressure. As a result, 18 months after the initial transplantation, the patient underwent completion right-sided transplantation with left-sided lung volume reduction surgery (LVRS). The surgery was successful and the patient was discharged without complication. 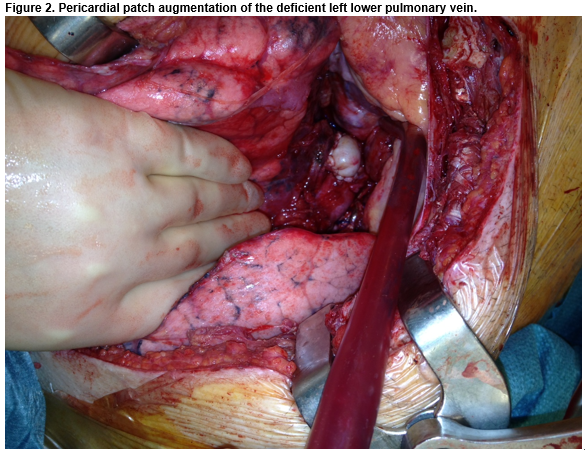 Discussion
Vascular anastomotic complications identified in the early post-operative period have been reported from large retrospective studies as occurring in 1.8% of patients1. Associated mortality rates are between 37.5% and 80%1,5. We propose that despite Perfadex preservation at the time of redo surgery, “no flow” phenomenon in the LIPV contributed to lobar dysfunction and chronic graft failure.

Multiple mechanisms are proposed for vascular anastomotic complications. Restrictive lung disease, donor-size mismatching and thrombosis have also been cited as causes for vascular anastomosis complications and may have been contributory in this case1. The recipient in this case was a 41-year-old male with end-stage IPF, a restrictive lung disease. The donor was 5cm taller than the recipient and this may have contributed to pulmonary vein-left atrium size mismatching.

Pulmonary vein stenosis with thrombus formation at the suture line or in the left atrium can mimic infection, allograft rejection, fluid-overload and myocardial dysfunction. Venous obstruction causing pulmonary oedema can result in graft failure. Newly transplanted lungs are preferentially perfused and in the setting of a single transplanted lung, acute dysfunction can lead to a rapid deterioration. As little as 4-6 hours of warm ischaemia can cause irreversible allograft damage3. Embolization may result in cerebrovascular events and systemic emboli2. Early diagnosis and intervention is crucial to preventing these sequelae. In this case, transoesophageal echocardiography failed to demonstrate PVS. A CTPA with venous-phase delay should be considered in the event of clinical deterioration if pulmonary oedema is localised to a single lung or lobe on x-ray.

Treatment options described for pulmonary vein stenosis include percutaneous dilatation, with or without stenting, or surgical refashioning6. In this case, due to early thrombosis, surgical refashioning of the anastomosis and thrombectomy were seen as the most appropriate intervention. Cold Perfadex was perfused after clamping and performing thrombectomy to prevent dilatation of the pulmonary veins and subsequent systemic embolization whilst stabilising the capillary membrane to reduce the effects of warm ischaemic time. Pericardial patch augmentation of the deficient left atrium was used to ensure adequate vessel diameter.

In summary, PVS complicated by early thrombosis post lung transplant is a rare diagnosis but is associated with poor outcomes. Urgent surgical intervention as the mainstay treatment of anastomotic complications with thrombosis.