Introduction
Hurling is a fast-paced impact sport that is known to be associated with trauma to the head, face and hands1. Helmets with facial guards have been introduced by the Gaelic athletic association (GAA) in 2010 as a means of preventing head and maxillofacial injuries. Although the national safety authority of Ireland (NSAI) identify certain standards for hurling helmets, modifications are known to be quite common2. A recent study by O’Connor (2018) showed that 31% of players surveyed from a total of 304 had modified their helmet in some fashion either by changing the faceguard completely or removal of single bars. The main reasons given for modification were; restricted vision, comfort and perceived poor quality of the helmet/faceguard. Anecdotally, players may modify one’s helmet to help improve peripheral vision and thus situational awareness. In the literature, there exists only one case of penetrating injury from a facial guard of a hurling helmet3. The trend of modifying helmets seems to be increasing the incidence of these serious injuries. We believe that there is a general lack of awareness among players and officials as to the dangers of modifying protective equipment. We present the case of a penetrating hand injury as a direct result of a modified facial guard where a single bar was removed.

Case-Report
Our patient is a 24-year-old male playing for his local club during a league match in May. While attempting to catch the ball his left hand struck the helmet of an opposing player. Due to the modifications of the opposing player’s helmet (single bar removed leaving a sharp remnant in its place) our patient sustained a penetrating soft tissue injury to the ring and little finger of his dominant hand, becoming lodged in the nailbed of the ring finger (Figure 1). The entry point was through the tip of the ring finger, the spike progressed tangentially across the distal phalynx and into the little finger entering volar aspect above proximal interphanageal joint and exiting on ulnar aspect dorsally (Figure 2). The patient was received in the emergency department where the helmet was removed leaving only the metal bar. He specifically had no digital nerve damage in ED. He was treated as per penetrating injury protocols and was transferred to theatre. Surgical exploration and removal of bar entailed open exploration of possible damaged structures including flexor and extensor compartments of little finger. Nail-bed repair ring finger was performed. Routine post operative elevation and antibiotic protocols were instituted and he was discharged after 24hrs. He returned to sports 4 weeks after the injury once his wounds had healed. 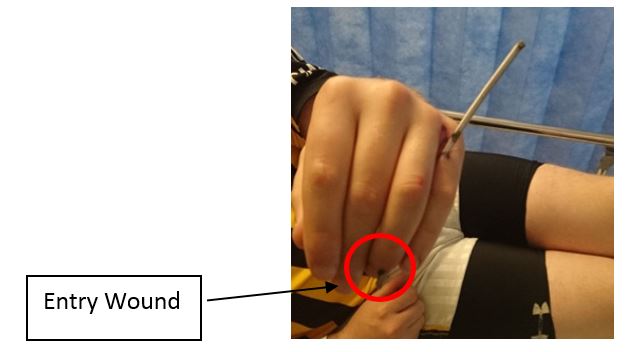 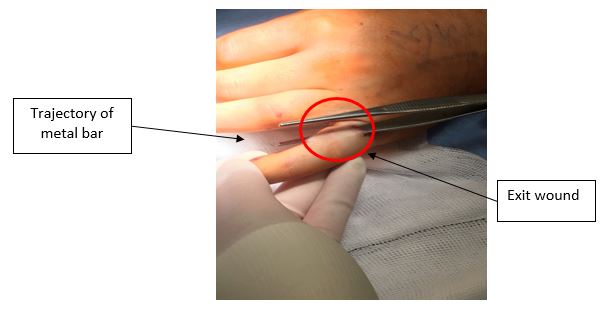 Discussion
The introduction of mandatory helmet wearing across all age gradients by the GAA in 2010 has resulted in significantly less injuries attending emergency departments. In fact, wearing a helmet fitted with a faceguard reportedly reduces the risk of hurling-related head injuries presenting to A&E 10-fold 4. Although the NSAI and the GAA forbid any tampering of helmets from their factory specifications modifications are known to be quite common with 31% of players admitting to modifying their faceguard in some way 2. These modifications are responsible for some of the most serious injuries sustained in hurling i.e. penetrating wounds 3. Although it is likely unintentional that these modifications are intended to be dangerous they can result in sharp metal bars protruding from players helmets.

Although penetrating injuries from a helmet in hurling are a rare injury they occur as a direct result of helmet modification. We feel by highlighting the dangers of this practice we can raise awareness among players and officials and to effect a change in this modification practice.