Methods
AS patients with active disease despite adequate trials of NSAIDs were commenced on TNFi and followed in a biologic clinic between 2004 and 2011. Response to treatment was measured based on clinical and serological outcomes. Baseline radiographic data were also collected where available.

Discussion
Despite similar disease activity at baseline, post-TNFi therapy women had significantly higher disease activity. Furthermore, ESR levels in women during therapy correlated with their clinical disease activity scores. Further exploration of these gender-specific differences is crucial for a greater understanding of the pathogenesis of AS as well as development of targeted therapies.

Ankylosing spondylitis (AS) is a chronic, inflammatory disease, predominantly affecting the axial skeleton, the sacroiliac joints and entheses1. Progressive sacroiliitis and spondylitis result in pain, fatigue and stiffness, while structural changes of syndesmophyte formation and ankylosis reduce mobility1. Antecedent inflammation likely leads to impairment in structure and function, reducing quality of life in AS patients, whose life expectancy may also be shortened1. AS has a prevalence of 0.1-1.1%2. Initial symptoms usually present in the second and third decade of life, resulting in considerable personal and economic burdens of disease2.  Traditionally, treatment of AS has been limited to non-steroidal anti-inflammatories (NSAIDs) and structured exercise programmes3. The disease modifying anti-rheumatic drugs which suppress disease activity and slow disease progression in rheumatoid arthritis (RA), have shown limited efficacy in spondyloarthritides (SpA), particularly in those patients with axial skeletal disease4. In contrast, tumour necrosis factor inhibitors (TNFi) have shown significant benefit in subjective and objective measures of disease activity, physical function and quality of life in AS5,6,7. Remission rates of up to 50% have been reported and this therapeutic response is sustained with long term therapy, both in clinical trials and in clinical practice7. Long term tolerability of these agents in AS has translated into retention rates superior to that seen in the RA population8.

AS is an heterogenous disease and not all patients suffer debilitating consequences suggesting different degrees of disease severity. AS has one of the longest delays in diagnosis of all rheumatic diseases, primarily due to the wide range of clinical presentations and absence of radiographic abnormalities of sacroiliac joints at onset9. The exact pathogenesis of AS is poorly understood and the clinical course and response to treatment can be highly variable. Recently, a number of studies have highlighted sexual dimorphism in AS with respect to both baseline disease activity and severity10,11. In addition, there may be gender-specific differences regarding clinical outcomes and responses to TNFi therapy12. We examined clinical and serological outcomes in a real-life cohort of AS patients treated with TNFi therapy. A secondary goal of this study was to investigate gender-specific differences in AS at baseline and during TNFi therapy. We, furthermore, performed a subgroup analysis of baseline radiographic damage of AS patients based on radiographic data collected during treatment.

AS patients (defined by the Modified New York Criteria for AS13) with active disease despite adequate trials of NSAIDs were commenced on TNFi and followed in a biologic clinic between 2004 and 2011. TNFi agent for each patient was recorded at baseline. For the the first year of therapy, patients underwent 3-monthly reviews. Health Assessment Questionnaire (HAQ) scores were collected. Disease activity was measured by the Bath Ankylosing Spondylitis Disease Activity Index (BASDAI)14 and serum erythrocyte sedimentation rate (ESR) and C-reactive protein (CRP) levels. Physical function was assessed using the Bath Ankylosing Spondylitis Functional Index (BASFI)15 and Bath Ankylosing Spondylitis Metrology Index (BASMI)16 was employed to assess spinal mobility.

Each parameter was recorded before initiating TNFi and subsequently at each review and the number of patients whose disease activity scores improved by 20% (BASDAI 20) and 50% (BASDAI 50) were calculated.  Baseline radiographic data were collected where available. Radiologic disease progression was quantified with the modified Stoke Ankylosing Spondylitis Spinal Score (mSASSS), a composite index scored between 0 and 72 which characterizes the radiologic changes in the spine of patients with AS17. Kruskal-Wallis and Mann-Whitney U tests were used to compare non-parametric categorical and continuous data. Spearman’s rank coefficient assessed correlations between clinical and serological data. Results are given as the median (interquartile range, IQR) unless otherwise specified. Data analysis was performed using SPSS statistical software (version 18, Chicago, Illinois, USA). Statistical significance was considered at p< 0.05. 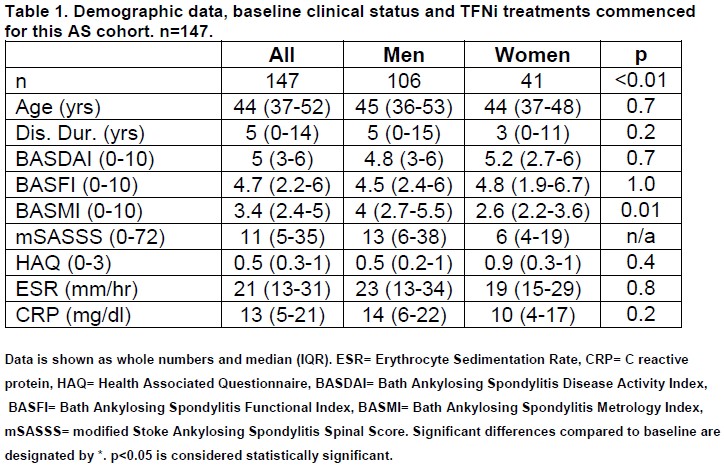 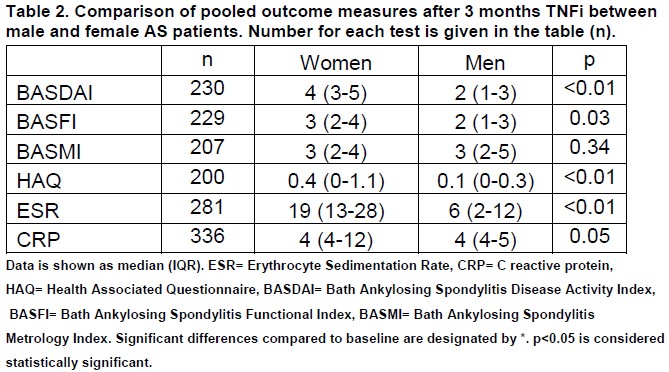 At baseline, BASMI scores were significantly lower in women (2.6 (2.2-3.6) v 4 (2.7-5.5), p=0.01) but other AS outcome measures (BASDAI, BASFI, HAQ, inflammatory markers) were not significantly different between genders. There was no significant difference in age or disease duration between groups. Clinical and demographic details of the cohort are shown in Table 1.

Pooled data (i.e. all measurements for all patients) for the first 3 months after commencement of TNFi are shown in Table 2. Outcome measures of disease activity at baseline, three months, six months and one year following commencement of TNFi are shown in Figure 1. Within the first year of therapy, a BASDAI 20 response was observed in 60% of patients and a BASDAI 50 response was seen in 34%. There were significant improvements in all clinical (HAQ, BASDAI, BASFI, BASMI) and serological (ESR, CRP) parameters during the first year of therapy. However, BASFI significance was not sustained at 1 year (Figure 1). There was no significant difference between specific TNFi therapies in either onset of response or outcomes measured. 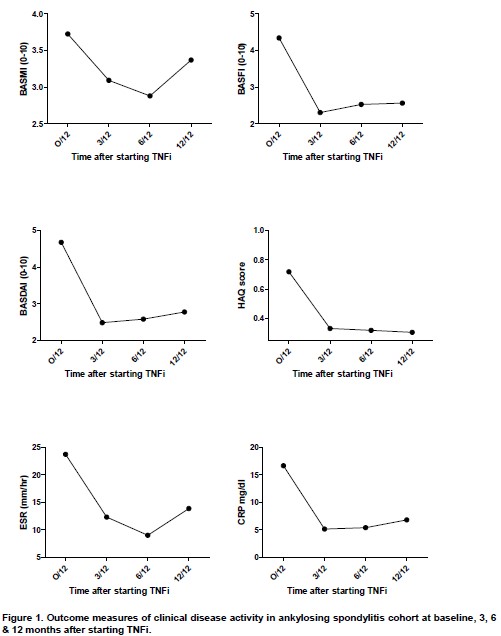 We present data on a large cohort of AS patients following commencement of TNFi therapy in a tertiary rheumatology referral centre. This demonstrated a significant response to TNFi therapy based on both clinical (HAQ, BASDAI, BASMI and BASFI) and serological (ESR and CRP serum levels) outcome measures. Total response rates (BASDAI 20 and 50) were comparable to those previously reported in the literature18. The gender ratio in our cohort was 2.6:1, closely representative of that in the general population. In our cohort, despite similar disease activity and functional impairment at baseline, women with AS had significantly better spinal mobility than men. Following TNFi therapy, measures of spinal mobility were similar between men and women. However, women had significantly higher clinical disease activity as measured by BASDAI. Serum ESR and CRP levels were higher following TNFi therapy in women. Furthermore, ESR levels in women during therapy correlated with their BASDAI scores.

Initially, a male preponderance of 9:1 was reported in the literature. However, the discovery of HLA B-27 and the development of criteria for the diagnosis of AS led to increasing numbers of women being diagnosed and the current gender prevalence ratio is believed to be 2-3:119. This historic presumption of AS as a disorder almost exclusively affecting men resulted in the established data on AS being derived from a predominantly male population. Several studies suggest the diagnosis of AS is delayed or underdiagnosed due to the diverse presentation of the disease19. Women often present with different disease phenotypes characterized by higher disease activity and poorer functional scores19. Males show faster progression of disease, with more structural changes, than females20. Men presented with typical inflammatory back pain while women more frequently complained of lower abdominal, pelvic, heel and widespread pain19. The presence of widespread pain in females correlates with a doubling of the delay in diagnosis of AS and an accordingly older age at diagnosis.

According to our findings, no difference in clinical disease activity (as measured by BASDAI scores) or functional limitation (with respect to BASFI scores) were seen between genders at baseline. However, following commencement of TNFi therapy, women had statistically higher BASDAI and BASFI scores than their male counterparts. Cross-sectional studies have previously shown disease activity to be higher in females than males10,21, but this is associated with better spinal mobility11, in keeping with our findings. Data from the PSOAS cohort also showed greater baseline functional disability in women, however only with the inclusion of BASRI spine scores in the multivariate model22.  It has been shown that women have less improvement in AS outcome measures (BASDAI and BASFI) than males following TNFi therapy12. We have examined, in a single cohort of patients, gender-specific differences in these parameters, not only at baseline, but also subsequent changes following initiation of TNFi therapy.

The greater disease activity (BASDAI) scores seen in women, is supported by the elevated ESR and CRP levels and, furthermore, by the correlation between BASDAI and ESR. Significantly higher ESR and CRP levels in female AS patients when compared with their male counterparts have been previously reported19,21. This may represent a higher level of systemic inflammation, manifesting as widespread pain incorrectly labeled as fibromyalgia in female patients treated with TNFi, resulting delayed or misdiagnosis19. Taken together, these findings suggest that TNFi more adequately suppresses disease activity and nociception in male patients compared with females. The exact mechanism for this remains unclear. Additional genetic, immunological and/or physiological factors may contribute. Although there is no association between X-chromosome linkage and susceptibility to AS23, two distinct regions within the ANKH gene are significantly associated with AS only in affected men, and two separate markers were associated with AS only in affected women24. In addition, both IL-17A and TH-17 cells are elevated in male patients with AS but not female patients25. Finally, higher body fat content at baseline is independently associated with an inferior response to treatment with TNFi therapy26. Gender differences in body fat content may therefore explain the differences in therapeutic responses reported herein.

This study reflects a retrospective analysis of routinely collected clinical data and, therefore, is not controlled for bias with an obvious discrepancy in the number of male and female AS patients. However, no patients were excluded and this study reports the outcomes of patients who were treated as per their clinical need. A small number of patients had complete mSASSS scores or follow up radiographic data, which precluded comparison of differences in radiographic outcomes post-TNFi therapy and between genders. It would have been preferable to correct CRP and ESR levels for body fat percentage to better establish if gender difference in serum inflammatory markers is influenced by other covariates.

In summary, this study suggests that women with AS experience greater disease activity and functional limitation despite TNFi therapy when compared with men. This is potentially due to an interplay of inflammatory, genetic and physiological differences between men and women such as hormone levels, body fat or muscle mass. Women with ankylosing spondylitis treated with TNFi drugs have a greater degree of inflammation giving rise to worse functional and global health scores, whereas males suffer from a greater impairment in spinal mobility. Given the emergence of new targeted treatments for AS, a greater understanding of the pathological substrates of these gender differences is required for more effective individualized therapy.

The authors declare no conflicts of interest in relation to this study.