Psychological distress is common in patients with cancer and psychological well-being is increasingly seen as an important component of cancer care. The aim of this study was to examine the relationship between cancer type and subjective distress. The following data were collected from a database of consecutive psycho-oncology referrals to the Liaison Psychiatry service in Cork University Hospital from 2006 to 2015: demographics, cancer diagnosis, Distress Thermometer (DT) score. 2102 out of 2384 referrals were assessed. Of those assessed, the most common cancer diagnoses were breast (23%, n=486) followed by haematological (21%, n=445). There were significant difference in DT score between the different cancer types, (χ2(13)=33.685, p=0.001, Kruskal–Wallis test). When adjusted for age, gender and whether or not the cancer was recently diagnosed, there was no significant association between cancer type and psychological distress. In conclusion, cancer type is not associated with level of distress in cancer.

Introduction
Psychological distress is common among cancer patients. Receiving a cancer diagnosis is often life-altering and can be life-limiting. Cancer treatment including medication regimens and necessary lifestyle modifications can be challenging. As a consequence, cancer care has increasingly included psychological well-being as one of its key targets. Studies suggest that mental health disorders can independently affect survival in patients with advanced cancer1. Subjective distress and mental health disorders are more likely to be identified if screened for routinely and then treated appropriately2. It has been suggested that certain cancers may be associated with higher levels of distress. Linden et al4 have demonstrated links between different cancer types and psychological distress in particular with lung, haematological and gynaecological cancers. The aim of this study was to examine whether particular cancer type may be associated with higher levels of subjective distress in a large Irish sample of cancer patients at a regional cancer treatment centre.

Methods
Data were collected from an electronic database from January 2006 to December 2015 that was populated prospectively from consecutive psycho-oncology referrals to the Liaison Psychiatry service in Cork University Hospital over that time period.  Cork University Hospital (CUH) is the main acute general hospital in the southern region and is one of eight regional cancer centres in Ireland. A multidisciplinary Liaison Psychiatry service includes a Psycho-oncology Liaison Clinical Nurse Specialist who provides assessment and management of adults who are attending for cancer treatment at CUH Regional Cancer centre. Patients referred to the psycho-oncology service who were 18-years-old and above with a cancer diagnosis were included in the study. For this study the following data was collected from inpatient and outpatient assessments: demographics details, cancer diagnosis, and distress thermometer (DT) score.

The Distress Thermometer (DT) was endorsed by the National Comprehensive Cancer Network (NCCN) as a screening tool for measuring subjective distress5. It consists of a single statement:"Please circle the number below that best describes how much distress you have been experiencing in the past week including today". Patients indicate their level of distress on a visual analogue scale which is presented in the style of a thermometer with a mark between 0 (‘no distress’) and 10 (‘extreme distress). The DT is completed by the patient voluntarily and is part of the brief distress assessment by Oncology front line clinical staff at CUH. When considering their patients needs and specifically the need for Psycho-oncology referral, the Oncology clinical staff use the DT to complement the identified clinical need rather than being a screening tool per se. Statistical analysis was performed using PC SPSS Statistics version 21.0 (IBM). The Mann-Whitney U test was used to compare differences between gender, new diagnosis and DT score. A simple linear regression was calculated to predict DT score based on age. T-tests for independent samples were used to compare age between groups. The DT score was compared across cancer types using Kruskal–Wallis test. A one-way ANCOVA was performed to determine whether there was a statistically significant difference between cancer type and DT score controlling for age, gender and new cancer diagnosis. The likelihood of a ‘Zero’ distress DT score was compared between men and women using the Chi-Square test. 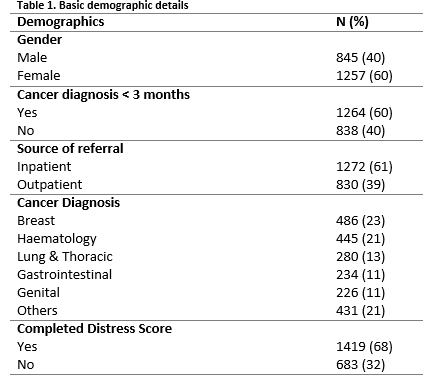 Sixty-eight% (n=1419) of those assessed had also completed the DT questionnaire. Patients who did not complete the DT Questionnaire were older in age when compared with those who did complete the DT (57.8 SD 13.6 v 55.5 SD 13.4 years, independent samples t-test, p<0.001). Males were also less likely to complete the DT than females (Pearson Chi-Square 21.9, p<0.001 Fishers Exact test). Of those who did complete the DT Questionnaire, median DT score of the entire sample was 6 (range 0, 10). Females had significantly higher DT scores than males (Mann-Whitney U test, U=183943, p<0.001). There was no significant difference in DT score between those with recent (ie< 3 months) and non-recent cancer diagnosis (Mann-Whitney U test, U= 226130.5, p=0.911). 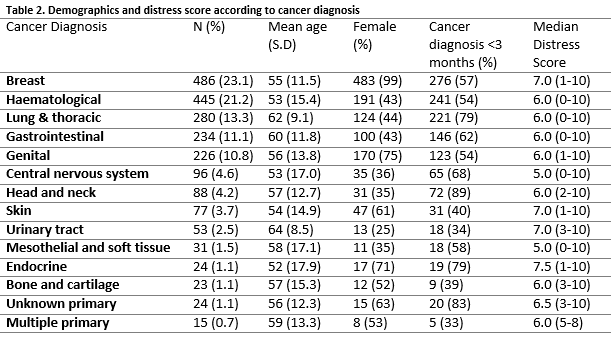 Discussion
The purpose of this study was to investigate whether or not an association exists between different cancer type/site and self-rated psychological distress in patients attending cancer treatment services. Previous work in this area7 suggests that cancer patients do not form a homogenous group when it comes to levels of psychological distress; subjective distress has been shown to differ according to the specific type of cancer, such as prostate and breast cancer, amongst others8,9. In order to carry out our own enquiry, we sourced data from a large electronic database of consecutive psycho-oncology referrals at a Regional Cancer centre over a ten-year period. The majority of these patients referred also completed a validated measure of distress, the Distress Thermometer (DT)5. Breast cancer patients were the largest group referred to our service, consistent with the overall prevalence of the disease. Breast cancer patients were also among the cancer types with the highest subjective distress scores although this effect was no longer apparent when gender and age were controlled for.

Our study suggests that age and gender are associated with subjective distress in cancer in line with previous studies9,11. Our gender subgroup analysis suggests that women are 50% more likely to report higher distress levels than their male counterparts. With regard to age, we found that an inverse relationship exists between age and distress, with older patients reporting less distress whereas younger patients are more likely to report higher distress levels7,11,12. Our findings are consistent with previous work9 which has suggested that the combination of gender and age is what actually matters: the emotional distress of younger patients tends to be greater than that of their older counterparts for a variety of reasons, including the negative impact of a cancer diagnosis on family life and career, as well as the attendant physical consequences of cancer treatments for young women in particular.

A zero score on the distress thermometer is a curious finding in patients referred because of concerns about their psychological well-being. While a majority of those with cancer are clearly resilient, at least some distress should be expected and therefore its absence could be viewed as maladaptive14. The finding that men were over-represented in this group is consistent with the literature on male denial of distress15. It follows that optimal distress assessment especially of older men should include where possible taking a collateral history from a significant other.

One of the limitations of this study is that it did not include illness-related variables such as cancer staging and phase of treatment, which have been found to be key predictors of psychological distress at various points in the course of the disease10. It also did not include the types of treatment for cancer that have been shown to impact on levels of distress according to the severity of the treatment modality9. Other psychosocial variables such as marital status, children, education and employment status were also not examined. Knowledge of such characteristics might have highlighted particular risk factors for developing psychological distress which might otherwise be overlooked. The strengths of the study are the large sample size and the applicability of the findings to Regional Cancer centres all of whom should offer distress assessment and management to their patients in line with National policy16 and international best practice5.

Conflict of Interest:
The authors declare that they have no conflict of interests.