Aim
Proton pump inhibitors (PPIs) are frequently prescribed to surgical patients (50-60%) to prevent gastrointestinal bleeding. However, most surgical patients are at low risk of significant bleeds. The aim of this audit was to identify inappropriate PPI prescribing, if any, in a cohort of surgical inpatients.
Methods
This was a prospective analysis completed over a 4 month period. Data was collected via review of clinical notes and drug charts.
The audit standard was the consensus guideline on indications for PPI use issued by Scarpignato et al (2016).
Results
In total 89 patients were included (n = 89). 73% were on PPI therapy. 30% had a documented indication for therapy which was concordant with recommendations. However, the majority of PPI prescriptions (70%) were inappropriate.
Conclusion
PPIs are frequently prescribed to surgical patients without an appropriate indication. Indiscriminate use of these drugs has implications in the form of costs and potential complications.

The development of proton pump inhibitors (PPIs) has revolutionised the treatment of upper GI disorders arising from acid hypersecretion, such that elective surgical intervention for peptic ulcer disease is now virtually unknown and anti-reflux surgery increasingly rare.1 Their role includes the therapeutic management of reflux oesophagitis, peptic ulceration and gastritis and, in combination with early endoscopy, therapeutic treatment of upper GI bleeding secondary to these. In addition they have a prophylactic role in patients at elevated risk of upper GI bleeding.2,3

However, PPI prescribing rates continue to increase out of proportion to the known prevalence of acid-related disorders and beyond expected rates if administered according to guidelines.1,3 They are frequently prescribed both in the community and on hospital admission, in part due to a perception that they are benign medications without a significant side effect profile. This increase is also associated with significant costs; spending on PPIs in Ireland increased by €88 million over the 14 year period from 1995 to 2009.4

However, PPIs   have been associated with adverse effects including increased risk of Clostridium-difficile associated diarrhoea (CDAD), pneumonia/LRTI, chronic kidney disease, and hypomagnesaemia.5-7 The financial costs associated with overuse are also significant, with costs arising from inappropriate inpatient and post-discharge prescribing ranging from 40, 000 to – 750,000 USD per year..8

Therefore, in the knowledge that PPI prescribing is increasing and may not be clinically justified in many scenarios, we sought to examine prescribing practices in our institution and to assess, if any, the scale of overuse.

Data on consecutive patients were collated prospectively over a 4 month period in 2 general surgical wards and the intensive care unit in a Model 3 hospital in the Republic of Ireland. Inclusion criteria comprised all patients over the age of 18 admitted under the care of a surgical team. All presenting complaints/admitting diagnoses were included. Exclusion criteria comprised patients under the age of 18 and any medically admitted patients. In instances where a patient was re-admitted with the same complaint during the period of the audit, only the data pertaining to the initial admission and discharge was recorded in the database.

In this unit patients presenting with abdominal pain and with upper GI bleeds (stable and unstable) are admitted under the care of a surgical team, with access to endoscopy within 24 hours or sooner if clinically indicated.

Data was collected via review of clinical notes and individual patient drug charts. The extracted information included age, admitting diagnosis, relevant comorbidities, concomitant use of antiplatelet and/or anticoagulant use, concomitant NSAID prescription, type and dose of PPI prescribed, route of administration, whether patients were prescribed PPI prior to or on admission, and whether PPI therapy was continued on discharge. The data was anonymised and tested for potential for re-identification.

The audit standard selected was the consensus guideline on indications for PPI use issued by Scarpignato et al in 2016; ‘Effective and safe proton pump inhibitor therapy in acid-related diseases – A position paper addressing benefits and potential harms of acid suppression’. (see Table 1) 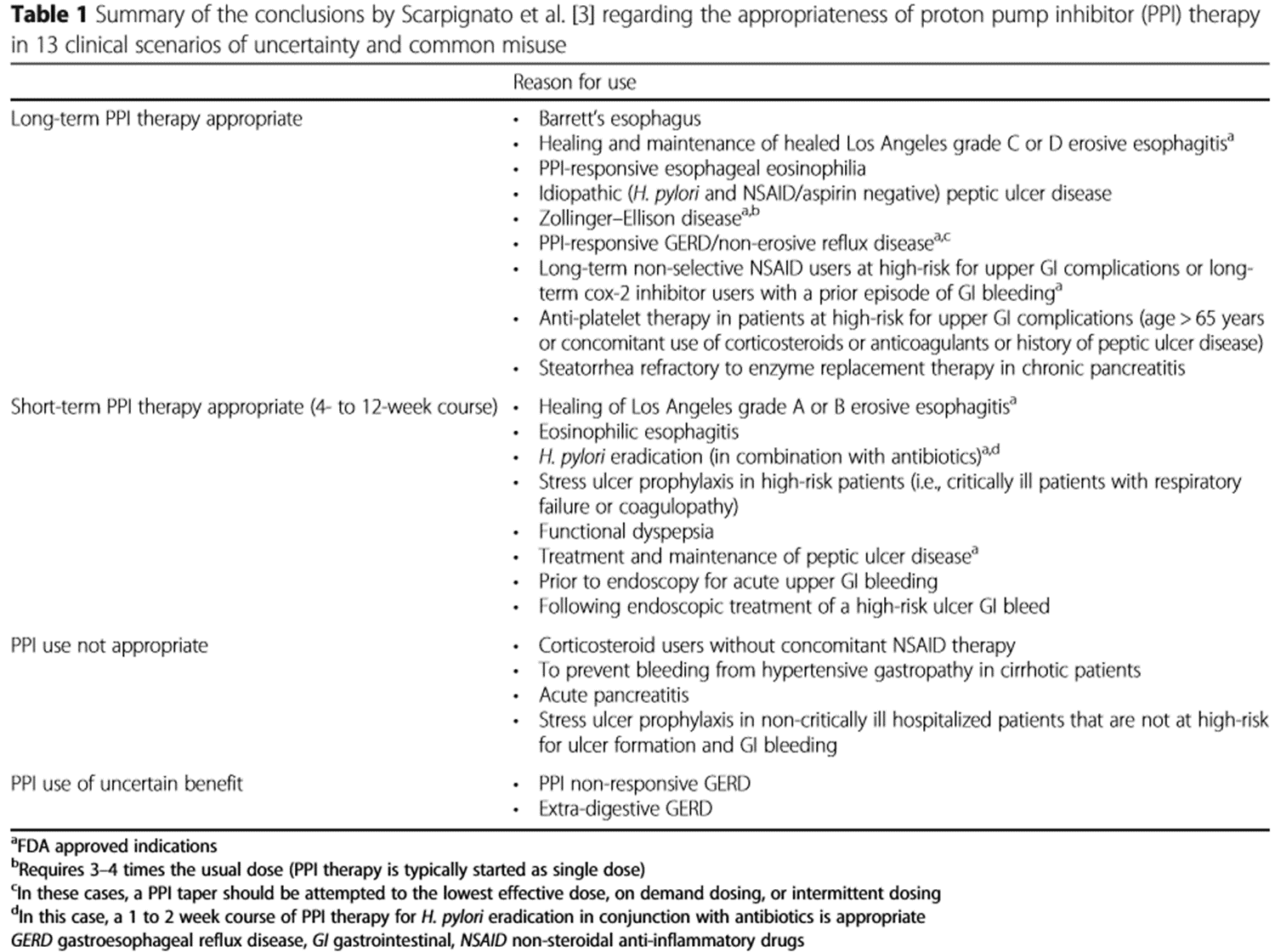 Data was collected on a total of 89 surgically admitted patients over the 4 month study period (n = 89). The average age of the cohort was 62 (range 19-96), with 52% aged 65 and over.  Most patients were receiving care on a general surgical ward (96%), with data collected on 4 patients based in ICU.

Of the cohort, 65 patients (73%) were on a PPI. In 55% of patients this was prescribed on admission; in the remaining 45% the prescription was prior to a surgical admission.

Distribution of drug prescribing
The most commonly prescribed PPI was esomeprazole (72.3%), followed by lansoprazole (23.1%); the remainder were scripts for omeprazole or pantoprazole.

There was no significant difference in prescriptions for PPI or volume of inappropriate prescribing between patients on the above medications versus those not.

Route of administration
The majority of patients (60%) were prescribed the PPI via the oral route. In 82% of those receiving PO PPI the prescription was not concordant with recommendations. In the remaining patients on IV PPI, 48% of prescriptions were concordant. All of the concordant intravenous prescriptions were for suspected or confirmed acute upper GI bleeds. In the group of patients on intravenous PPI where this did not conform with recommendations, the most frequent indications recorded were acute lower GI bleeding and patients post colorectal resections.

Inappropriate prescribing
70% of patients receiving PPI medication had no indication for such treatment as per audit standard (Fig.1).2

Figure 1 – Distribution of appropriate prescribing in patients on PPI vs not on PPI. 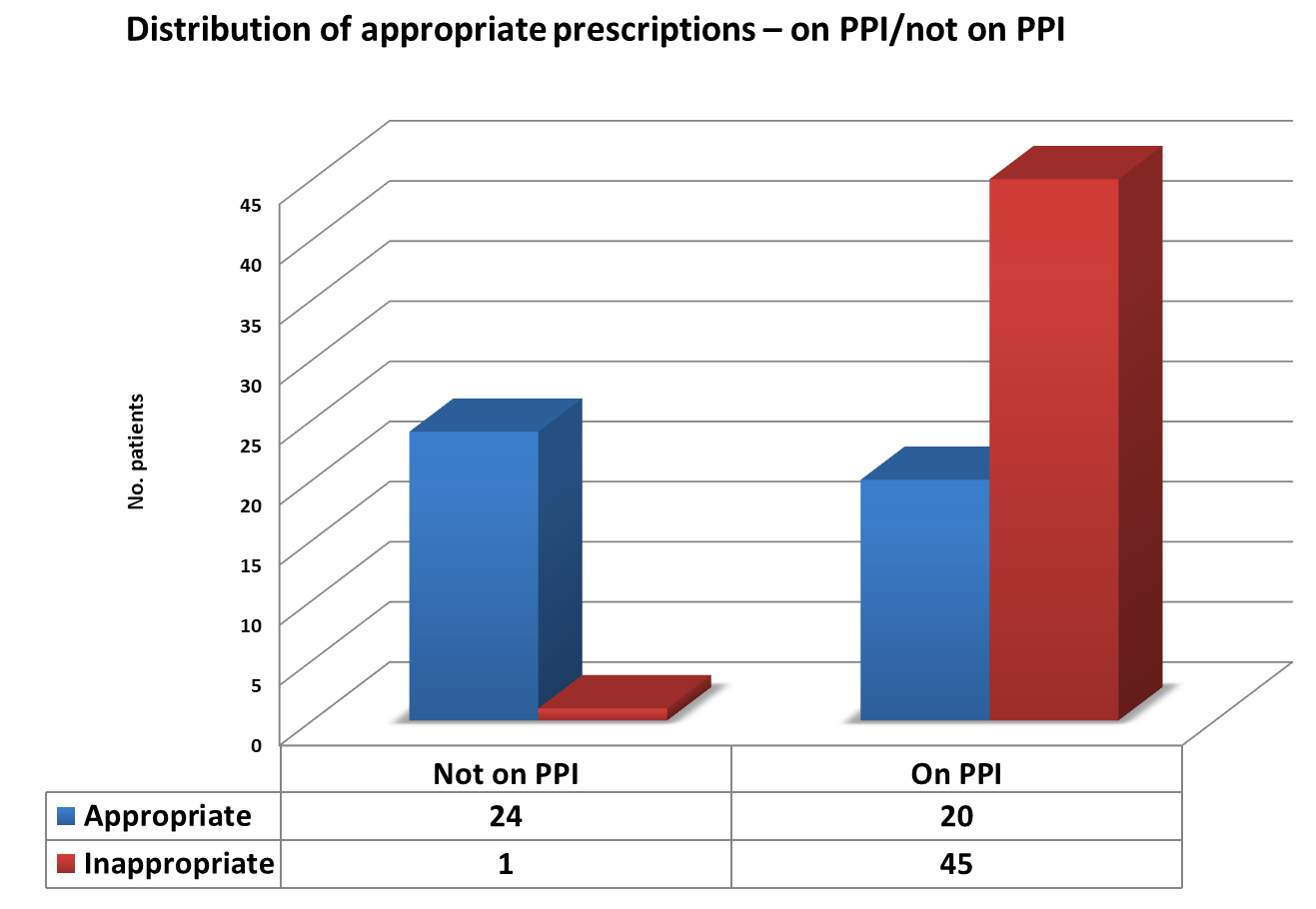 Older age was associated with an increase in PPI prescribing (p= .0001), with the mean age of the cohort on PPI therapy 67 years comparative to 49 years in the cohort not on PPI. However, no association was noted between older age and increased proportion of inappropriate prescribing. Factors which were associated with inappropriate prescribing included post-operative patients (OR 1.64, CI 0.45-5.98) and ward level care (versus ICU) (OR 0.0425, p = .0025%).

We noted a trend towards a greater volume of inappropriate prescriptions in those patients who were commenced on PPI on admission to hospital(72%) comparative those already on therapy prior to admission (65%) (Fig.2).

Figure 2 – Distribution of appropriate prescribing in those prescribed PPI prior to vs on admission. 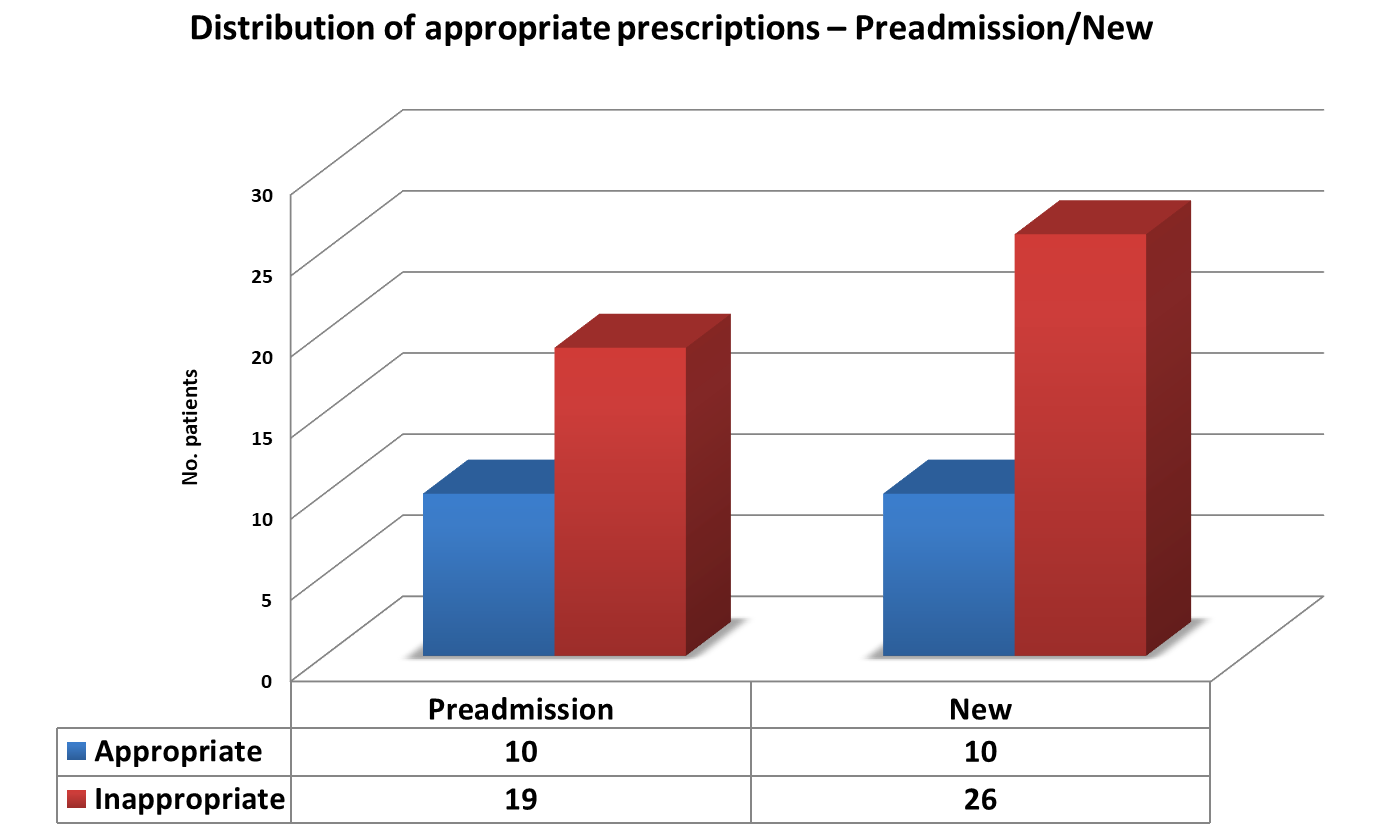 However, in the cohort of 25 patients not on a PPI, only 1 patient was inappropriately not on therapy according the recommendations set out in the audit standard.

Of note, 27% of inappropriate prescriptions which had been commenced on admission to hospital were continued at the time of discharge.

This audit examined the prevalence and pattern of PPI prescribing to determine the proportion of both appropriate and inappropriate prescriptions in a cohort of general surgical inpatients over a consecutive 4-month period. The audit finds that while omission of PPI therapy for patients with a valid indication is a rare occurrence, inappropriate overprescribing of PPIs for conditions where no recognised benefit exists is substantial with many of our patients being over-treated.

Factors contributing to the frequency at which PPI therapy is prescribed include the common perception among prescribers that these are safe medications without a significant side effect profile, despite a growing body of evidence to the contrary; and a lack of awareness of appropriate versus inappropriate indications for PPI therapy. This is borne out by findings from a 2001 Australian report investigating contributing factors to inappropriate PPI use.14  Furthermore, an American review performed as recently as 2016 showed that only 24% of physicians prescribing PPIs were aware of guidelines regarding appropriate indications for acid suppression.15  Knowledge of appropriate guidelines is associated with a decrease in prescription rates.15,16 In addition, prescribing rates are higher in physicians who are unaware of the potential side effect profile associated with PPIs. A 2010 paper examining factors influencing PPI prescribing behaviour in a tertiary centre found that less than half of respondents were able to identify a single side effect of PPI therapy, and that a significant association existed between lack of awareness of the side effect profile and inappropriate prescribing.16

Interestingly, despite recommendations from the Health Service Executive (HSE) and Medical Management Board that lansoprazole is the drug of choice in this class, by far the most commonly prescribed PPI was esomeprazole (72.3%).17 This recommendation is primarily due to cost effectiveness, with a cost differential of 16.72e between lansoprazole and esomeprazole (cost per pack).18 However, studies indicate that at equivalent doses there is minimal disparity in the clinical effectiveness of esomeprazole, lansoprazole and other PPIs. 19 Thus, the clinical justification for the predominant prescribing of esomeprazole is unclear. It most likely arises from prescribers’ familiarity with this over the available alternatives and lack of awareness of the associated cost differential. Although somewhat conflicting, there is evidence to support the theory that providing prescribers with information regarding medication pricing reduces prescribing of high cost medications comparative to equivalent alternatives.20

This audit highlights the frequency with which inappropriate prescribing occurs, the need for education amongst NCHDs on appropriate indications, and the potential costs. Previous audits on this topic in the UK have shown that despite once-off educational interventions aimed at correcting this issue, PPI overprescribing remains common.21 Thus ongoing educational interventions for NCHDs are warranted in order to minimise the associated risks and costs of unnecessary PPI therapy. In addition, multidisciplinary input from allied health professionals such as hospital pharmacists in order to assist in medication reconciliation and identification of inappropriate scripts or indeed less expensive alternatives has demonstrated superior outcomes versus education of medical prescribers alone.22  This impact extends to the community setting, where recommendations by community pharmacists to prescribers regarding tapering or discontinuing PPIs has been shown to decrease overall prescription rates.23

Limitations of this audit include the relatively small number of patients recruited and the reliance on accurate and thorough documentation of treatment indication and pre-existing conditions in the medical records. However, despite these weaknesses, the results appear to capture the reality of daily surgical practices and highlights the need to reinforce the existing guidelines on PPI prescriptions.

In conclusion, the scale of PPI overuse is significant, in both the community and the acute setting. By contrast, omission of PPI therapy where a valid indication exists is rare. There is therefore a need for ongoing education of NCHDs with regard to appropriate indications for PPI use.

Conflict of Interest:
No conflict of interest declared. Appropriate ethical approval was sought prior to commencement of the audit.