We conducted a prospective randomized study to compare outcomes of intravitreal Bevacizumab versus diode laser in thirty eyes of fifteen premature babies with zone 1 or posterior zone 2 retinopathy of prematurity (ROP). We recorded complications, regression/reactivation of ROP, visual outcome, refractive error and systemic complications. The Bevacizumab-treated eyes showed rapid regression of the ROP with resolution of plus disease and flattening of the ridge at 48 hours post injection. In 3 Bevacizumab-treated eyes, reactivation occurred and were treated with laser (3 eyes) or a further Bevacizumab injection (1 eye). Of the diode laser treated eyes, one showed progression and was treated with Bevacizumab. At 5-year follow-up, good outcomes were observed in both treatment groups. However, less myopia was found in the Bevacizumab compared with the diode laser treated eyes.

The ‘Cryotherapy for Retinopathy of Prematurity (Cryo-ROP)’ study marked a great advance in the management of ROP. The early treatment for retinopathy of prematurity (ETROP) study further changed our approach to management and influenced the visual prognosis for the better2. ROP is a biphasic condition with a hypoxia induced rise in Vascular Endothelial Growth Factor (VEGF) levels leading to abnormal blood vessel growth3. During this phase of increased VEGF production, anti-VEGF therapies may be used. The increased availability of anti-VEGF5 agents has provided a pharmaceutical approach to the treatment of ROP. The Beat ROP study examined the efficacy of primary intravitreal anti-VEGF therapy (Bevacizumab; Genentech Inc., San Francisco, California, USA), versus laser therapy for Zone 1 stage 3 with plus disease or posterior Zone 2 stage 3 with plus disease4. It opened up a new frontier in the treatment of posterior ROP. In this paper we report five year follow-up in a group of premature infants who had bilateral ROP Zone 1 or posterior Zone 2 disease with plus disease. Each infant was treated with intravitreal Bevacizumab to one eye and diode laser to the fellow eye. The mode of treatment administered to the eyes was randomly selected.

The study group comprised preterm infants who at ROP screening were found to have zone 1 or posterior zone 2 ROP with plus disease. One eye of each infant was randomized to be treated with either intravitreal Bevacizumab or laser. The fellow eyes of each infant were automatically selected to receive the treatment not selected for the first eye. All procedures were performed in the special baby care unit (SBCU) under morphine sedation by one surgeon (MO’K). Prior to treatment, infants received topical chloromycetin drops to both eyes for 24 hours. Betadine 2% was instilled into the eye for five minutes prior to injection of Bevacizumab. Under sterile conditions, 1.25mg of Bevacizumab in 0.05ml was drawn up into a syringe. It was injected 3mm from the limbus with a 23 gauge needle directed vertically towards the vitreous cavity. Following the injection topical antibiotics were continued 4 times daily for 3 days. Conventional treatment with diode laser was applied to the fellow eye. The eyes were monitored weekly for eight weeks then monthly for twelve months.

Fifteen infants were enrolled in the study and treatment with laser or Bevacizumab was performed between 33 and 37 weeks post menstrual age (Table 1). There was a rapid regression of the ROP in the eyes injected with Bevacizumab with the resolution of the plus disease and flattening of the ridge observed at 48 hours. Complete regression occurred more slowly, taking in excess of twelve weeks. Despite initial regression, 3 eyes treated with Bevacizumab subsequently showed reactivation and progression of the ROP with return of the plus disease and ridge formation anterior to the original site of pathology. Three of these eyes received laser therapy. Of these, one eye showed further progression and had further Bevacizumab therapy. In the laser treated group, regression was seen at one week with resolution of plus disease and flattening of the ridge in all but one eye. This eye showed signs of progression and was treated with intravitreal Bevacizumab resulting in complete regression of ROP. 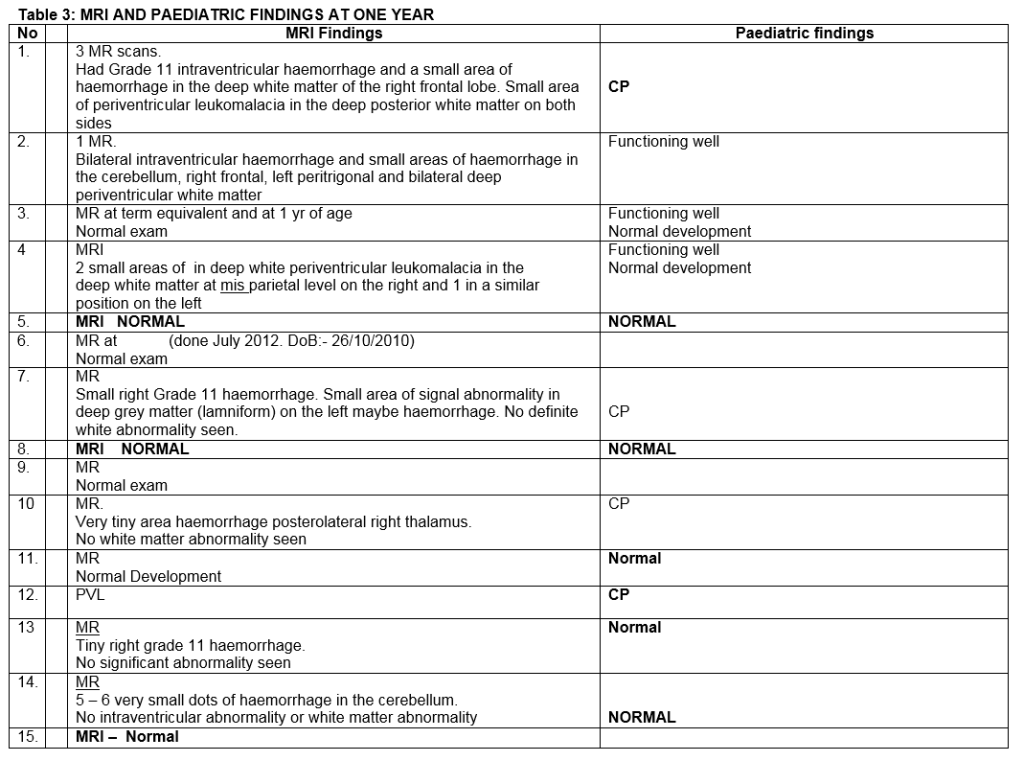 One year post-treatment, each child was assessed by a consultant paediatrician. No abnormality was detected that could be attributed to Bevacizumab therapy. Likewise, neuroimaging with MRI scans at one showed no adverse changes attributable to this treatment. No difference in refractive error was found between the laser-treated and Bevacizumab-treated fellow eyes. VEP/ERG responses were similar in both eyes (Table 3). At five year follow-up, eyes treated with diode laser demonstrated significant myopic shift compared to eyes that received Bevacizumab. The retina remained flat in both groups. Examination by an experienced paediatrician (JM) revealed no evidence of systemic adverse effects associated with Bevacizumab (Table 4).

Prior to the publication of the BEAT-ROP study, the majority of publications pertaining to the use of anti-VEGF agents in the management of ROP comprised only small series or case reports. Anti-VEGF therapy was reserved mainly for use as a ‘last resort’ in severe cases were ROP had progressed despite adequate laser treatment. The BEAT-ROP study was the first randomized controlled trial that compared Bevacizumab to diode laser, and showed a higher failure rate in the laser treated group. It stimulated unprecedented commentary (much of it adverse), because of its conclusion that Bevacizumab should become the treatment of choice in Zone 1 ROP4. Concerns were raised that Bevacizumab could have systemic effects, interfering with normal vasculogenesis and re-vascularisation. It can escape from the eye into the systemic circulation and reduce serum levels of VEGF. This has raised concerns of a risk to the developing cerebrovascular, myocardial and pulmonary systems in infants. A five-year retrospective analysis reported that both intravitreal Bevacizumab and laser were effective treatment option for type 1 ROP with low complication rates but with less myopia in those treated with Bevacizumab5. A further study comparing both modalities reported good structural outcomes and no difference in visual acuity or refraction. They reported more frequent follow up was required in the IVB group, but their study was retrospective in nature with short follow up of less than one year6. In our study, four eyes had recurrence of ROP, 3 post-Bevacizumab treatment and 1 post-conventional laser therapy. There was a significant time delay to recurrence in the Bevacizumab group with a mean age of 51 weeks post menstrual age at the time of recurrence. This delay in recurrence has also been reported by other studies including the BEAT-ROP trial4.

We randomized eyes in contrast to Mintz-Hittner who assigned infants randomly so that both eyes of each infant received the same treatment. Assigning treatment to eyes has the advantage of being able to more directly compare the two different treatments, but the disadvantage is that Bevacizumab enters the systemic circulation and in theory may have an effect on the laser treated fellow eye. In our study, 10 infants had zone 1 and five had Zone 2 disease. The effect of Bevacizumab was apparent within 48 hours with resolution of plus disease and flattening of the ridge. It took four months from treatment for complete vascularisation to the periphery to occur. During this time we observed further peripheral ridge formation in 3 eyes. We judged the ridge and reactivation of the disease serious enough in these eyes for further treatment with diode laser. In one eye, progression persisted requiring re-injection of Bevacizumab with subsequent complete regression. At one year follow up, all infants underwent ocular and systemic examination including assessment by a consultant paediatrician, MRI brain, electrophysiology (VEP/ERG) and dilated ocular assessment. No difference was found in the VEP and ERG results recorded from each eye of these children. No systemic problems associated with Bevacizumab were detected on paediatric evaluation. No adverse changes were reported on MRI imaging of the brain at 1 year follow up.

At five-year follow up, significantly higher levels of myopia were found in the laser treated group. This firstly was reported in other studies5. Of greater importance, no structural ocular problems or clinical systemic problem attributable to Bevacizumab were detected. Dosage is important given concerns relating to systemic absorption and potential adverse effects on other organs, and in particular, pulmonary development. The BEAT-ROP study reported four deaths related to lung disease in the Bevacizumab group and one in the laser group. This has been seized upon by many of the sceptics who are critical of intravitreal Bevacizumab therapy in ROP. For the duration of our study we used the adult dosage of 1.25mg in 0.05ml. This had the effect of increasing intraocular pressure acutely with development of corneal oedema. A paracentesis was required in some eyes to reduce the pressure7. A comparative study of vitreous cavity volumes of post mortem eyes of adults and premature infants showed the volume of infant cavities to be less than a third that of the adult volume8. Since completion of this study, we use Bevacizumab routinely in the treatment of Zone 1 and posterior zone 2 ROP but now use half this dose. Mintz-Hittner used a dose of 0.625mg in 0.025ml4 and a therapeutic effect with a dosage of 0.375mg has been reported9. Another important factor is the timing of the treatment with anti-VEGF agents. This is critical and the exact therapeutic window during which Bevacizumab is most effective is unknown. In the presence of stage 4 ROP, anti-VEGF agents may initiate adverse events within the eye resulting in devastating cicatricial changes and retinal detachment10.

This study was prospective, however our numbers are small. A multicentre trial would be required inorder to attain greater numbers. Most publications relating to anti-VEGF therapy in the treatment of ROP have used Bevacizumab. However, other agents are also available such as Ranibizumab which also targets VEGR-A. Bevaziumab, being larger (a full length 149-KDa antibody) than Ranibizumab (a 48 kDa antibody fragment) may have less tissue penetration and less systemic absorption. Ranibizumab has a systemic half life of 2 hours versus Bevacizumab which is twenty days. However it also has a shorter vitreous half life which may be important in the treatment of ROP11. Importantly for most health care systems worldwide and not least for developing countries, Bevacizumab is only a fraction of the cost of Ranibizumab12. We believe that Bevacizumab is the best option in the treatment of ROP in Zone 1 – 2 posterior disease. The retina is preserved in contrast to laser resulting in preservation of visual fields and less myopia13. In this study the anatomical results from laser were similar. However, in a previous study we reported poorer outcome with laser in zone 1 disease14.

In conclusion, compared with conventional laser treatment, Bevacizumab is less destructive and easy to administer. In addition, it is readily and cheaply available. It offers real hope for developing countries where ROP is at epidemic proportions and laser treatment is not readily available. The drawbacks include prolonged monitoring for up to four months after initial treatment, the risk of cataract formation and endophthalmitis. This five year follow up shows reduced myopia compared to diode laser and excellent anatomical and visual outcomes. A further important finding is that intravitreal bevacizumab caused no detectable adverse systemic effects 5 years post treatment.