Clinical Consensus Guidelines on the Application of Cerebrospinal Fluid Biomarkers for Alzheimer’s Disease Diagnosis: Recommendations of the Irish Network for Biomarkers in Neurodegeneration

It is accepted that a lumbar puncture (LP) and cerebrospinal fluid (CSF) biomarker analysis support the routine diagnostic work-up for the differential diagnosis of dementia due to Alzheimer’s disease (AD) within certain patient cohorts1. These tests, which measure CSF protein concentrations of amyloid-β42 (Aβ42), total tau (t-tau) and phospho tau (p-tau), were recently validated, accredited and made available clinically for the first time in Ireland. A working group, comprising Irish clinical and scientific researchers, met to review a) the validation results; b) international consensus opinions, and c) research and clinical evidence as to the clinical utility of CSF biomarker analysis for AD dementia diagnosis. The outcome of this meeting was the formulation of a consensus statement paper for the benefit of health care professionals involved in the diagnosis and management of dementia to ensure appropriate use of these biomarker tests in clinical settings in Ireland.

A diagnostic biomarker possessing good sensitivity and specificity can support AD diagnosis and lower the probability of false negative or false positive test results particularly when trying to rule out non-AD dementias2,3. Traditionally AD diagnosis has been made using the National Institute of Neurological and Communicative Disorders and Stroke and Alzheimer’s disease and Related Disorders Association (NINDS-ADRA) criteria4 which have a reported average sensitivity and specificity of 81% and 70% respectively5. This indicates that in some cases these criteria, if used without additional diagnostic supports, may identify individuals as having AD when in fact they may have a non-AD dementias6.

CSF biomarker analysis and neuroimaging biomarker platforms have proven sensitivity and specificity for discriminating for AD dementia and have, along with several other biomarkers, been recommended as diagnostic adjuncts in the recently revised National Institute on Aging and Alzheimer’s Association’s (NIA-AA) research diagnostic criteria for AD dementia7 (Table 1). Aβ42, t-tau and p-tau are recognised as the most informative of all CSF biomarkers in relation to their analytical sensitivity and specificity for the diagnosis of AD7. They mirror the pathophysiology of AD with decreased CSF Aβ42 and increased CSF t-tau and p-tau concentrations reflecting increased amyloid plaque load in the brain parenchyma, and neuronal degeneration and neurofibrillary tangle formation respectively, expected changes in AD CSF biomarker levels are such that Aβ42 concentrations decrease to around 50% of control levels and t-tau and p-tau CSF concentrations increase by 200-300% over controls (as reviewed by Blennow et al., 2015)3. CSF Aβ42 concentration is inversely related to Aβ plaque load levels as measured in living brain biopsies8 and p-tau and t-tau CSF concentrations reflect the scale of degenerative neuronal AD-pathology. In addition, very high t-tau CSF concentrations are closely associated with more rapid advancement to AD and increased death rates9.

Magnetic resonance imaging (MRI) and computed tomography (CT) demonstrate atrophy of the hippocampus and temporal cortex and fluorodeoxyglucose-positron emission tomography (FDG-PET) shows neuronal functional decline as represented by hypometabolism of the parietotemporal lobe and posterior cingulate gyrus in AD affected brains10,11. Structural imaging (MRI, CT) allows for the exclusion of non-AD diseases, and MRI can be helpful for observing disease progression over time11,12, FDG-PET on the other hand lends itself to increasing diagnostic certainty with a reported specificity of 95% for supporting the differential diagnosis of other dementias13.

While widely accepted as research tools, challenges exist regarding the use of CSF biomarker testing in clinical settings; at the fore lies a lack of standardisation with respect to its execution and analysis. Reports to date have shown that the most established assay platforms for measuring CSF biomarkers perform well at a local level with an intra-laboratory variation of around 10%14.  However inter-laboratory variation at 20-30% is unacceptably high, and renders the interpretation of assay data across clinical or research facilities difficult14,15.  To overcome this issue it has been recommended that each laboratory develop its own CSF biomarker reference ranges and cut-off values, pertinent to the relevant local population, using well defined subject recruitment criteria and data/sample collection methodologies15.  Secondly, at present there are no guidelines as to when each of the biomarkers, imaging, and CSF could be used to best effect during the dementia diagnostic process, whether they should assessed in parallel to maximise sensitivity and specificity or in isolation (as reviewed by Blennow et al., 2015)3. However, it has been reported that their ability to discriminate for AD significantly increases when they are used in combination16.

Finally, other issues include a lack of defined indications for the clinical use of CSF biomarker analysis and guidelines on interpreting test results; moreover the lack of a long-term AD related disease modifying therapy strengthens the argument that it is potentially psychologically harmful to diagnose an individual at the very early or pre-dementia stages of AD. However, it has been reported that early diagnosis provides patients with relief and that there is substantial interest in early diagnostic testing in the public arena17,18. Furthermore, obtaining a diagnosis can allow patients to plan for the future in an informed manner and, importantly, assessment can detect treatable or reversible causes of memory disorders. To date, published consensus recommendations have focused on CSF biomarkers being used in cases of uncertain aetiology, atypical presentation or early onset neurodegeneration or dementia as it is felt that the standard assessment criteria should be sufficient to delineate typical cases of AD dementia. Most guidelines recognise the utility of measuring Aβ42, t-tau and p-tau in combination with routine diagnostic methods1,19.

A working group comprising members of the Irish Network for Biomarkers in Neurodegeneration (IN-BIND), Irish neurologists, geriatricians, geriatric psychiatrists, neuropsychologists, neuro-radiologists, medical laboratory scientists and a representative of the Alzheimer Society of Ireland met to discuss CSF biomarker analysis for dementia diagnosis to produce consensus statement recommendations for Irish health care professionals involved in the diagnosis and management of dementia (Summarised Table 2) The working group identified the most salient issues concerning the use of CSF biomarkers in clinical settings and discussed these points in the context of CSF biomarker testing recently becoming available in Ireland and with reference to international consensus recommendations and supporting scientific publications. 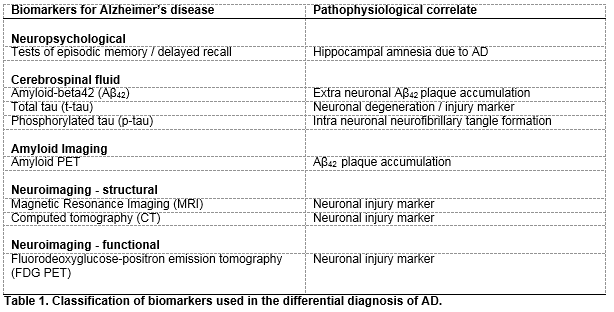 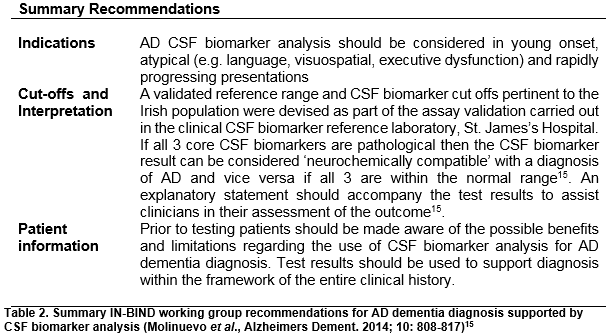 Where the standard assessment does not result in delineating the cause of the cognitive disorder, or in the case of rapidly progressive, young onset and atypical presentations, further functional neuroimaging (FDG PET) and/or LP for CSF analysis for the core AD biomarkers should be considered. Aβ42, t-tau and p-tau are the recommended biomarkers to support the diagnosis of dementia due to AD. Where DLB is a possibility, a 123I-FP-CIT single photon emission computed tomography (SPECT) (aka DaT) scan is a useful functional neuroimaging test20. In individuals with MCI, where the person wishes to know whether the cause of their memory complaint is possibly due to AD, biomarker analysis can be carried out following discussion between physician and patient on limitations of use in this context. CSF biomarker testing is not indicated in asymptomatic or genetically at-risk individuals. The recommendation for CSF biomarker testing should only be made in specialist settings by clinicians who are familiar with the testing and can interpret the results in the context of a comprehensive patient assessment (Figure 1) 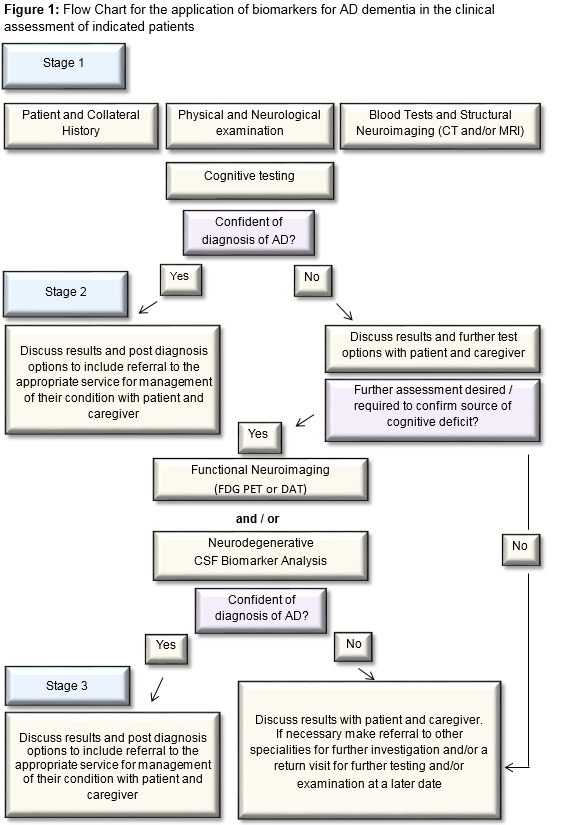 Sufficient sensitivity and specificity for CSF analysis and biomarker cut points is required to ensure an accurate AD diagnosis, and the value of a negative result cannot be understated. The working group recommendations indicate that CSF acquisition and processing be carried out according to standardised validated protocols (Table 3); that AD CSF biomarker analysis be carried out at a certified facility again according to standardised methodologies; that biomarker feedback include all three AD biomarkers (Aβ42, t-tau and p-tau) and that test results be assessed within the clinical context. Furthermore, following a review of the literature, the working group recommends that the following interpretation be applied to CSF biomarker results; in cases where pathological changes in all 3 CSF biomarkers are observed the CSF biomarker profile can be considered ‘neurochemically compatible’ with a diagnosis of AD and vice versa, if no pathological changes in the 3 CSF biomarkers are observed this result is considered ‘neurochemically incompatible’ with a diagnosis of AD. Moreover, CSF biomarker results in any other combination have been described as non-informative in relation to an AD diagnosis and further investigation is advised15. Finally, it is also recommended that results should be supported by an explanatory statement15 and that decisions on diagnosis should be made collectively) 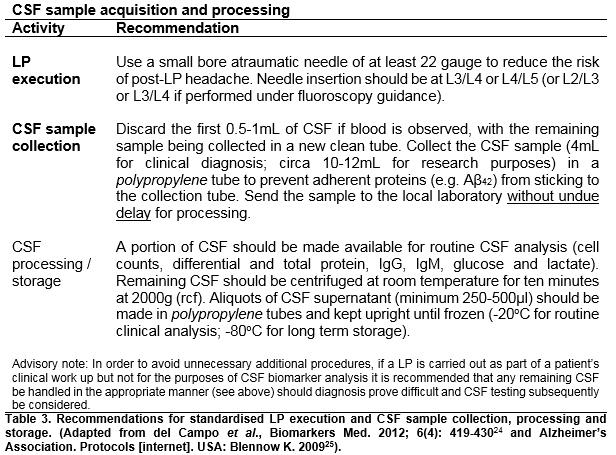 Bearing in mind that the person in question has a cognitive impairment, and possible dementia, clinicians need to be mindful that all information pertaining to the test be as accessible as possible and that it may need to be conveyed to the individual a number of times, therefore, regular checking for understanding is recommended. Clinicians must also be sensitive to the level of information wanted by the patient and tailoring of information for each patient is advised. In advance of testing patients should be advised firstly, that the test is an adjunct to the diagnosis of AD, improving the clinicians’ confidence of the diagnosis when added to all other clinical and testing information; and secondly, that the result may or may not support the diagnosis of AD and may prove inconclusive.

Final diagnosis must be informed by the entire assessment process and other test results, including the CSF biomarker results. Best practice indicates that disclosure should not be a once-off process and again for each person the process of disclosure, being mindful of the patient’s perspective, may differ. Results should be clearly explained in the context of their overall clinical picture.

The IN-BIND working group consensus recommendations support the clinical use of CSF biomarker analysis in the delineation of dementia due to AD. Clinical and research evidence shows CSF biomarkers have a high degree of sensitivity and specificity for AD and their capacity to positively contribute to the AD dementia diagnosis process, by increasing clinician confidence and supporting diagnostic accuracy in certain clinical situations, has been proven. Indeed, a comparison of the sensitivity of various biomarker platforms to discriminate for AD showed that MRI, CBF-SPECT, FDG-PET and CSF biomarkers performed with equal sensitivity in cases of moderate dementia; that CSF biomarkers and FDG-PET performed best in cases of mild dementia and CSF biomarkers alone performed best in cases classed as being of questionable dementia or mild cognitive impairment (clinical dementia rating 0.5)21. Moreover, CSF biomarkers have proven diagnostic accuracy and discriminatory capacity displaying 85% concordance with neuropathological and clinical evaluations and 90% capacity to distinguish between AD patients and controls22.  However, it is important to recognise that the specificity of the CSF biomarkers is lower for other dementias due to confounding factors such as underlying mixed pathologies or comorbidities23.

However, despite the acknowledged contribution that CSF biomarker analysis can make to the AD dementia diagnostic process, variation exists in the awareness of, and in attitudes and practices relating to, CSF biomarker analysis within and between countries across Europe. This disparity is recognised as one of the main barriers to their acceptance in clinical settings. In this context the IN-BIND consensus process highlighted the need for a clear defined pathway for clinicians as to how to incorporate CSF testing into the AD dementia diagnostic process, as well as the requirement for the dissemination of well-defined protocols for the appropriate handling and processing of CSF samples. The working group’s recommendations provide a framework to guide practitioners as to the appropriate use of, and standardised application of, CSF biomarker analysis for the differential diagnosis of AD dementia in Ireland.

The authors have no conflicts of interest to declare in relation to this work.

This work is part of the BIOMARKAPD project within the EU Joint Programme for Neurodegenerative Disease Research (JPND) and is supported through the Health Research Board under the aegis of JPND – www.jpnd.eu.