Cocaine use in Young Adults: Correlation with Early Onset Cannabis, Alcohol and Tobacco Use

There is ongoing debate regarding the relationship between early tobacco, alcohol and cannabis use and later cocaine abuse. We utilised data from two Irish national general population surveys. Of the 1,897 young adult participants, the prevalence of lifetime use was as follows: tobacco 62%, alcohol 96%, cannabis 31% and cocaine 7.0%. Logistic regression analysis indicated that being single, earlier age of first alcohol use, and history of cannabis use were significant independent predictors of lifetime use of cocaine. The substance use route to cocaine use in this Irish sample is quite typical of that seen internationally. Those who commence alcohol use in the early teenage years are more likely to use cocaine subsequently, even after controlling for early onset cannabis use and other socio-demographic characteristics. This suggests that policies which delay age of first drinking may possibly also curtail cocaine use.

There is a multitude of individual, familial and social precursors of cocaine use in adulthood1-4. Many studies report an independent association between early onset drinking and subsequent cannabis and cocaine use1,2,5. However, one European study found that early drinking was not associated with current cocaine use6. That same study and many others have shown a relationship between early onset tobacco use and later drug abuse5,7,8. Early onset cannabis use is also strongly associated with later cocaine use2,9. There is ongoing debate regarding this relationship between early tobacco, alcohol and cannabis use and later use of other drugs. The ‘common liability model’ states that a combination of risk factors places some young people at increased risk of both early initiation and of subsequent progression to more serious and sustained drug abuse8. Fergusson, Boden & Horwood presented evidence that early onset cannabis use and alcohol use each acted as independent predictors of later drug abuse, while controlling for the psycho-social risk factors for early onset drinking and cannabis use2. They, and others, argued that this is suggestive of a gateway role for each of these substances10-12. Age of first alcohol use has decreased dramatically in Ireland over the past 50 years13. Alcohol intoxication has a direct effect in impairing risk perception, which may in turn increase the likelihood that a young person chooses to use cocaine. In a recent Irish survey, it emerged that 70% of the adolescents who had used cocaine were alcohol intoxicated on the occasion of first cocaine use14. While Europeans are the heaviest drinkers in the world, Irish adults binge drink more than any of their European counterparts15. Per capita alcohol consumption has increased by about 180% in Ireland over the past four decades, at a time when it was generally falling in Europe13. The ESPAD study indicates that smoking has reduced in adolescents in Ireland between 1995 and 200716. Cannabis is the most widely used illicit drug with 20% of adolescents reporting lifetime use, and 9% reporting past month use in 200716. Only 4% reported lifetime use of cocaine.

National drug prevalence studies were conducted by the NACD in 2002 and 200617,18. The full questionnaire, along with a detailed description of multistage random sampling, is available in the respective technical reports17,18. The response rates were 70% and 65%. We included all participants aged 20 to 29 years in this analysis. Pearson’s chi-squared test was used to test the association between a lifetime history of cocaine use and categorical variables. Median ages of first use were compared across groups using the Mann-Whitney test. A multivariable logistic regression was used to predict lifetime history of cocaine use using socio-demographic and other substance use variables. For tobacco and cannabis use, participants were divided into three categories: never users, those who used at the median age of first use for the sample or older and those who used younger than the median age. Age of first use of alcohol was available for 96% of the sample and was included as a covariate. The potentially non-linear relationship between age of first use of alcohol and lifetime history of cocaine was explored non-parametrically with restricted cubic splines19. Tests for non-linearity used the likelihood ratio test, comparing the model with only the linear term to the model with the linear and the cubic spline terms. An unadjusted restricted cubic spline with four knots and using the median age of first use of alcohol as a reference value was fitted to the data. Odds ratios (OR) and their 95% confidence intervals (CI) were calculated. Variables were selected using stepwise selection techniques and the significance level was set at a=0.05. Goodness of fit was assessed using the Hosmer-Lemeshow chi-squared test and Nagelkerke R squared. 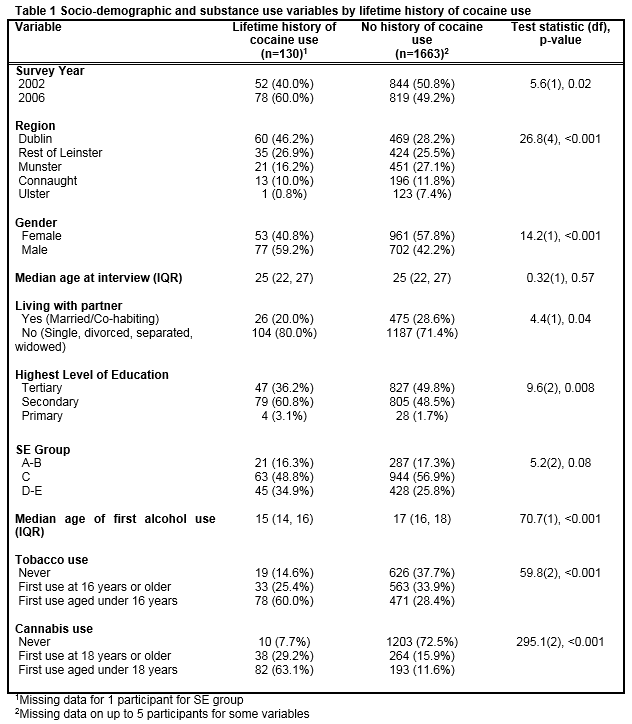 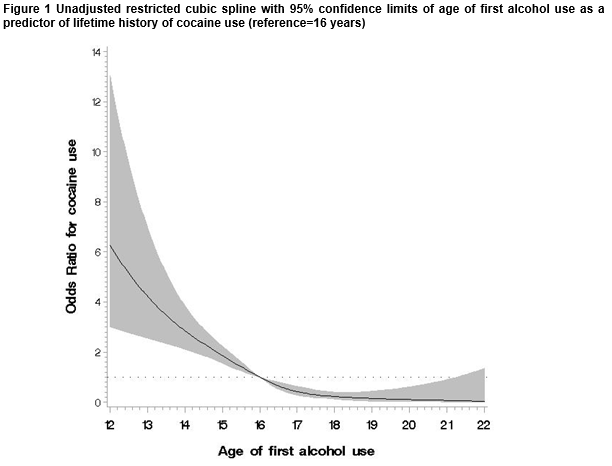 The route to cannabis and cocaine use in this Irish sample is quite typical of that seen in other international surveys9. Alcohol was a more prominent antecedent of both cannabis and cocaine use than tobacco. Unlike the other large European study which found that early onset tobacco, but not alcohol, was independently associated with later drug abuse6, we found the opposite. Early onset drinking and early cannabis use were independent predictors of lifetime cocaine use in these young Irish adults. Our finding is quite consistent with most of the international literature from outside of Europe2,5,20. Our detected association with earlier onset drinking is particularly concerning in light of the declining age of drinking onset in Ireland over the past three decades and prevalent permissive attitudes to adolescent drinking by Irish parents13,21. The association between age of alcohol initiation and cocaine use was non-linear, indicating that a one-year difference in timing of first drinking in early adolescence had a greater impact on odds of future cocaine use compared to a one-year difference in older adolescence. It is possible that our findings will not translate to other countries. Most drinkers in Ireland, demonstrate an unhealthy pattern of alcohol use22. Cocaine provides a different route to intoxication, and both substances are frequently used together23. The majority of young people in Ireland who try cocaine are drunk at the time and this may not be the case in other countries14. Others have suggested that both alcohol and cannabis play a causal role in subsequent cocaine use1,2,10,11. Our findings are consistent with this hypothesis. There is growing evidence that early onset drinking and cannabis use can cause enduring neuropsychological changes and some of these may explain the observed associations between early substance use and later escalation in drug use11,24. A recent study has also demonstrated that early onset substance use tends to lead to assimilation into deviant and substance using peer groups which in turn leads to increased risk of escalation of substance use25. Given the likely heterogeneity of routes to cocaine use for individuals in a population, it seems possible that early onset drinking and cannabis use may play a causal role in some cases, while simply being a proxy marker of risk in other cases4.

A strength of this study is the use of two nationally representative data sets. As a cross sectional study, no formal assessment of causality can be conducted. It is not possible to rule out the effect of unknown or unmeasured confounders. Recall bias and response bias might occur with respect to the onset of alcohol and drug use. The proportion of interviewees reporting lifetime use of cocaine was quite low and this limited the statistical modelling and contributed to fact that the 95% confidence intervals are quite wide. We conclude that adolescents who commence drinking in their early teenage years and those who use cannabis are at elevated risk of subsequent cocaine use. There are efforts in Ireland and elsewhere to reverse the downward trend in age of first drinking. If these efforts are successful, they may then also yield a reduction in cocaine use among young adults.

No funding was received for the completion of this study. The authors have no financial conflicts of interest to declare.

We are grateful to the NACD for making the data available to the research team.

6. Baumeister, S.E. & Tossmann, P. 2005. Association between early onset of cigarette, alcohol and cannabis use and later drug use patterns: An analysis of a survey in european metropolises. European Addiction Research 11:92-8.

16. Hibell, B.;Guttormsson, U.; Ahlstrom, S.; Balakireva, O.; Bjarnason, T.; Kokkevi, A. & Kraus, L. 2009 The 2007 ESPAD report: Substance use among students in 35 European countries. Stockholm: The Swedish Council for Information on Alcohol and Other Drugs.

23. McCrystal P, Percy A: A profile of adolescent cocaine use in Northern Ireland. International Journal of Drug Policy 20: 357-364.

24. Casey, B.J. & Jones, R.M. 2010. Neurobiology of the adolescent brain and behavior: Implications for substance use disorders. Journal of the American Academy of Child Adolescent Psychiatry 49:1189-201.