Critical Airway Compromise due to a Massive Vagal Schwannoma

We describe the case of a 37-year-old man with a slowly enlarging neck lump and compressive symptoms. He presented to a separate institution 10 years prior where an observational approach was advocated. Following preoperative investigations and embolization, an 11cm vagal schwannoma was excised and vagus nerve was sacrificed. Although conservative management is appropriate for a select patient population, surgical excision is treatment of choice for cervical neurogenic tumours and paraganglionomas and must be considered in young patients or rapidly expanding tumours to avoid compressive symptoms, as in this case.

A schwannoma is a benign tumour arising from Schwann cells, with a prevalence of 1 to 9 per 100,0001. Between 25 to 45% of extracranial schwannomas arise in the head and neck, involving cranial and peripheral nerves. These tumours have a predilection for patients between 30 and 50 years and are typically slow-growing in nature (2.75 to 3mm/year)2,3. A painless lateral neck mass is the most common presentation, however, with increasing size compressive (dysphagia/dyspnoea) and vagal irritative symptoms (cough/hoarseness) may develop.

A 37-year-old man with multiple co-morbidities including cerebral palsy, was referred with a 10 year history of a right neck mass. He initially presented to a separate institution in 2004. Radiological and histological investigations suggested a likely 6cm paraganglionoma and a conservative approach was advocated. In 2014 he was referred to our service with dysphagia, dyspnoea and episodes of critical airway obstruction. On one occasion, he presented to the Emergency Department with cyanosis and a Glasgow Coma Scale of 3 from airway obstruction due to mass effect. Physical examination revealed stridor, tracheal deviation and a massive (11cm) fixed neck mass. Flexible nasendoscopy could not be completed due to extrinsic compression of the oropharyngeal airway obviating assessment of vocal cord (VC) movement. Preoperative workup included magnetic resonance imaging and computed tomography confirming the presence of a well-circumscribed heterogeneous 11cm mass extending from the jugular foramen to thoracic inlet. CT-angiography demonstrated the close proximity of the carotid vessels, which lay anteromedial to the mass (Figure 1). Following multidisciplinary team discussion the patient and family decided to proceed with surgical excision. Prior to intervention he underwent percutaneous transfemoral catheter-directed microsphere embolization of the tumour’s arterial supply, under local anaesthesia.

Five days later, under general anaesthesia a neck-crease incision was made. A well-encapsulated yellow-white mass was visible beneath divided sternocleidomastoid and cervical plexus. The carotid vessels and internal jugular vein were spared. The mass was contiguous with a pathologically thickened vagus nerve (sacrificed). A tracheostomy was performed to protect the airway. The patient was decannulated after 7 days. Postoperatively, there was minimal disruption of speech and swallowing function. Flexible laryngoscopy showed right VC palsy. It was not possible to determine whether this was new or pre-existing. Histology confirmed a vagal schwannoma. After 6 months follow-up he had right VC palsy with good contralateral cord compensation, no recurrence and significantly improved quality of life. 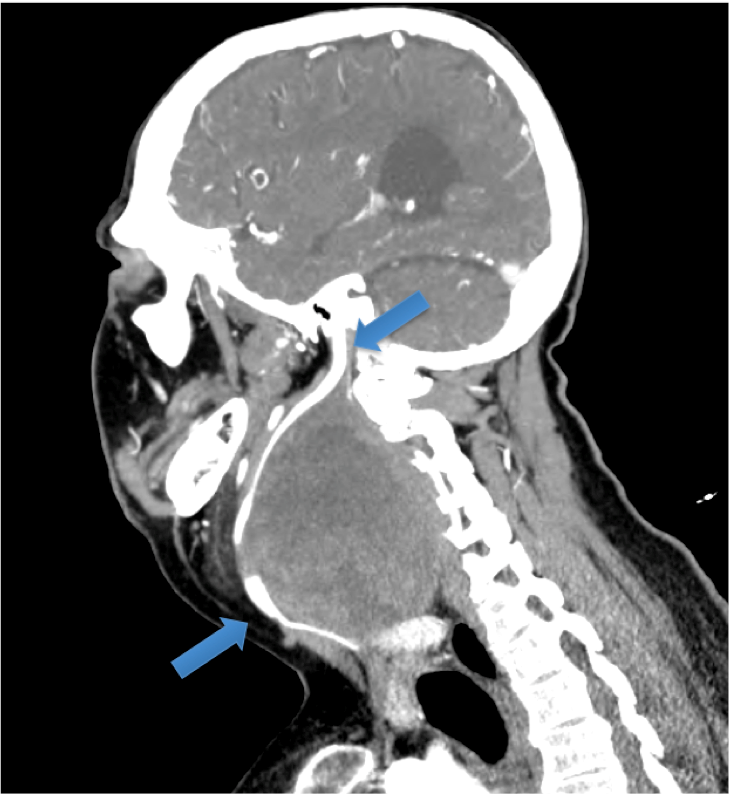 Figure 1: Sagittal image from CT-angiography. The carotid vessels are visible, and lie anteromedial to the mass. The inferior arrow indicates the common carotid artery. The superior arrow identifies the internal carotid artery entering the skull at the carotid canal. 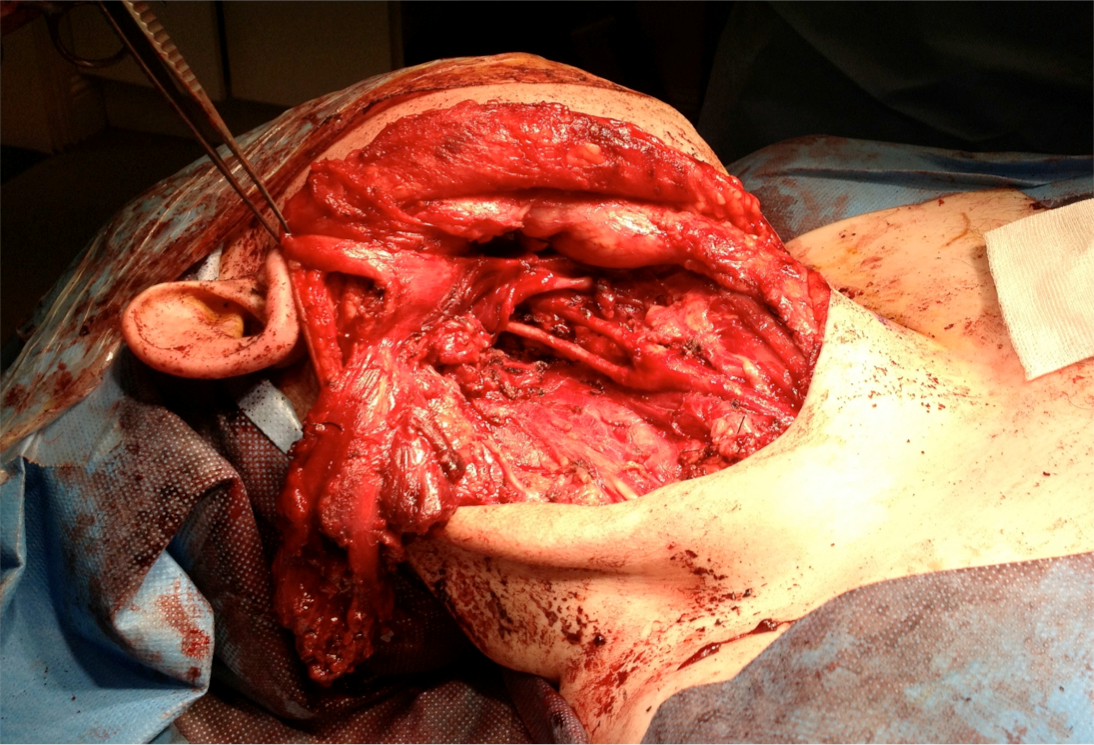 Figure 2: Surgical field near completion of procedure. This image was captured following resection of the mass. The spared carotid vessels are visible beneath the divided SCM.

Surgical resection, with preservation of nerve of origin where possible, is the treatment of choice for vagal schwannomas. Early intervention, when this benign tumour is smallest permits the greatest possible chance of nerve sparing4, precedes the development of compressive symptoms and negates the potential, albeit small, for malignant transformation5.The specific rate of transformation is not known, as most cases of malignancy involve isolated case reports or small series5-8, however it is estimated to be <10%. Data supporting observation for vagal schwannomas is limited, but is a recognised option for a distinct patient population including elderly, asymptomatic or those with normal cranial nerve (CN) function at high risk of CN sacrifice3,9,10. The conservative approach is feasible considering the slow growth of vagal schwannomas2,3. However, surgery must be considered in rapidly growing tumours or young patients where cumulative growth over a longer follow-up may result in development of a large tumour where compressive symptoms are anticipated, as in this case. Vagal schwannoma management should be conducted by an expert (Head and Neck Surgeon), in collaboration with the patient, taking into consideration the natural behaviour of the tumour and patient suitability for surgery.  Earlier surgical intervention on this patient could have prevented significant perioperative morbidity and enhanced quality of life in a more timely fashion.

The patients and staff of the South Infirmary Victoria University Hospital, Cork.