Aims
Most of those with a memory problem or concern over cognition present to their General Practitioner (GP) in the first instance. Despite this, the current diagnostic and referral patterns of Irish GPs remains unclear.
Methods
A survey was distributed to three separate cohorts of GPs (n=692)
Results
Ninety-Five (14%) responded. Most personally diagnose 1-3 (69%; 65/95) or 4-6 (21%; 20/95) patients with dementia per year. Two-thirds (62%; 59/95) refer >80% of those with possible dementia for further assessment/support, most commonly to support/clarify a diagnosis (71%; 67/95) and most frequently to a geriatrician (79%; 75/95). In half of cases (51%; 48/95), referral is to a professional working as part of an established memory clinic. One-fifth reported receiving dementia-specific postgraduate training (19%; 18/95) and over four-fifths (82%; 78/95) would welcome further training.
Discussion
Further attention to the ongoing establishment of memory clinic services and dedicated referral pathways, as well as increasing emphasis on dementia assessment and diagnosis in medical curricula, is warranted.

Introduction
Dementia is one of the most important age-related illness affecting older adults in Ireland, the prevalence of which is set to increase in the coming decades1,2. Whilst many patients with a memory problem present to their GP in the first instance, the current diagnostic and referral practices of Irish GPs remains unclear. Current guidelines and literature (e.g. the Irish National Dementia Strategy) advocate for increasing awareness around the importance of timely diagnosis and appropriate referral in general practice3-6.

Dementia remains a difficult diagnosis to formulate in the first instance (especially in the busy and time-sensitive general practice environment), requiring exploration of subjective memory complaints, formal cognitive screening tools, an adequate collateral history and numerous investigations. Differentiating normal ageing from dementia, lack of confidence in diagnosis and concerns over the impact of diagnosis are particular difficulties which have been highlighted by previous surveys of GPs7,8. Research in the UK has highlighted areas of difficulty in diagnosis including lack of time and support services as well as difficulty in talking with patients about the diagnosis9.

At present, it is not clear what proportion of patients with a memory problem/cognitive impairment are referred for further evaluation or support, whom they are referred to most often, and what the most common prompts for referral are. The aim of the present study is to answer these questions, adding clarity to the current diagnostic and referral practices of Irish GPs

Methods
Three GP cohorts were invited to participate, in order to be representative of the structure of general practice in Ireland and to capture regional variation in practice and access to services10: (i) GPs in the Cork/Kerry region (n=509), (ii) GPs and GP trainees affiliated with the TCD (Trinity College Dublin) GP Training Scheme (n=79) and (iii) GPs in the Kildare/West Wicklow area (n=104). An e-email was sent to each GP inviting them to participate in the anonymous online survey created online using google forms (google.com/forms). Responses were fully anonymised. A reminder e-mail was distributed one month after the original. The survey was designed by consensus between a consultant geriatrician, an academic GP with a special interest in dementia and a physician with experience in dementia assessment and diagnosis. Following drafting, it was piloted and revised by two other GPs involved in GP training prior to distribution of the final survey.

Routine demographic and practice data was collected. Key themes identified by the research team included: (i) the amount of patients diagnosed in a general practice environment, (ii) the practices of GPs with regard to diagnosing dementia in their practice, (iv) referral patterns of GPs in Ireland and (iv) perceived postgraduate training in dementia assessment and diagnosis. Following this, both open and closed ended questions were designed, with available responses adapted from recent Irish guidelines on dementia diagnosis in general practice6.

Data was collected from each of the participating cohorts and entered into SPSS V22.0 (IBM, USA) which was used to analyse the responses. Baseline data and responses to the closed-ended questions was analysed as percentages and proportions. For calculations where the representation of participants in subgroups/responses was analysed, a χ2 statistic was employed. Significance level was considered as p<0.05. In order to calculate representativeness of the respondents, demographic data was extracted from the recent report on the structure of general practice in Ireland10 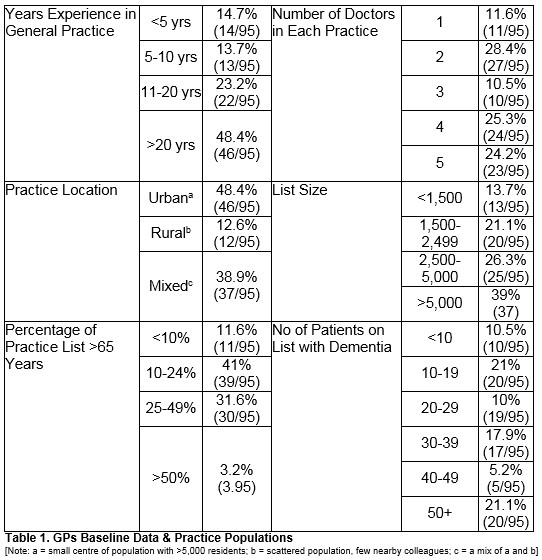 Initial Assessment of Patients with Possible Cognitive Impairment/Dementia
The vast majority of GPs reported obtaining a detailed history (93%; 89/95) and 92% (87/95) reported assessing cognition using an appropriate tool. Nearly all (88%; 84/95) reported obtaining a collateral history from a suitable family member or friend. Two-thirds (66%; 63/95) carry out a cardiovascular examination as routine, with a similar number carrying out a neurological examination (63%; 60/95). Two-thirds reported performing a mental state examination for depression (67%; 64/95). Routinely performing three or less of the above options in the initial assessment was not associated with <10/>10 years’ experience (χ2 =2.5; p=0.11) or diagnosing <3/>3 cases annually (χ2 = 2.67; p=0.11). 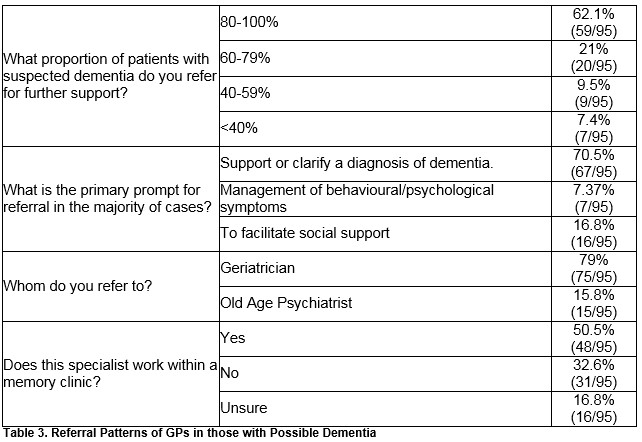 Screening Tool
The majority (82%; 78/95) use the MMSE (Mini-Mental State Examination). Eight (8%) use the MoCA (Montreal Cognitive Assessment), with six (6%) using the GPCOG (General Practitioners’ Assessment of Cognition), two the Mini-Cog (2%) and one (1%) the Abbreviated Mental Test Score (AMTS) routinely (Table 2)

The majority (79%; 75/95) routinely refer to a geriatrician with the remainder referring to an old age psychiatrist (16%; 15/95). Just over half (51%; 48/95) reported that the professional they refer to works within a dedicated memory clinic, with the remainder reporting that the professional didn’t (33%; 31/95), or that they were unsure as to whether or not this person worked in a memory clinic (17%; 16/95). Referral rates and patterns are included in Table 3.

Dementia Specific Postgraduate Training
Just under one-fifth (18/95; 19%) have received postgraduate training in dementia assessment/diagnosis with the remainder never having received dementia-specific postgraduate training (77/95; 81%). In those who received training, one-third (33%; 6/18) received this as a Diploma in Medicine for the Elderly (DME), two (11%) received this as part of clinical posts in geriatric medicine, with a further two (11%) obtaining these as part of ICGP small group learning. See Table 4.

Discussion
This is the first study to characterize the current diagnostic/referral patterns of Irish GPs in patients presenting with dementia. The present study demonstrates that relatively few patients are diagnosed with dementia in general practice annually, with the majority referred on for access to appropriate diagnostic and support services. Previous work a decade ago has estimated that GPs diagnose on average four cases of dementia per year7. Whilst the incidence of dementia has increased, the majority of GPs in the current study diagnosed three or less patients per year. Of note, a small minority diagnosed zero patients per year with dementia. It is important to note that in the current study number of cases diagnosed per year was not associated with confidence in dementia diagnosis or belief in the appropriateness of dementia diagnosis in general practice.

Interestingly, half of the GPs surveyed routinely refer to a professional within a memory clinic. Despite the presence of seventeen dedicated memory clinics in the Republic of Ireland, many areas support large numbers of patients with dementia without the presence of a dedicated memory clinic11. Further, the pathways to specialist referral may by unclear. On foot of the present findings, the further establishment and awareness of dedicated memory clinics and appropriate referral pathways as well as access to same should be a key priority in service planning for patients with dementia in Ireland. The present study found that the most popular cognitive assessment tool remains the sMMSE. Use of screening tools such as the General Practitioner Assessment of Cognition (GPCOG), devised for use particularly in general practice, and inclusive of a brief informant component, remains rare. Tools like GPCOG has been well-validated and are specifically designed for the general practice environment which has clear advantages in terms of brevity and perhaps sensitivity, as a recent large study in a primary care environment found12. Further work to establish the best tests for screening and diagnosis in the primary care environment are warranted, in addition to increasing awareness amongst practitioners of the merits and limitations of tools available for assessing those with concern over cognition.

Further, the present study reports that the overwhelming majority of GPs report never having received training in the diagnosis of patients with dementia and would welcome the opportunity for further training. In this regard, guidelines should as those published recently by the Irish College of General Practitioners (ICGP) are a welcome addition6. Despite relatively few GPs declaring previous training in dementia diagnosis, this number is increased on a survey conducted a decade ago, although an element of response bias may contribute. Further emphasis on dementia diagnosis and appropriate referral may be warranted in postgraduate training.

The low response rate of the present study represents a significant limitation and also introduces an element of response bias. Despite this, our sample was drawn from separate cohorts in three distinct regions, which provides an important reflection on diagnosis and referral practices on a national level. The three cohorts to best represent the structure of general practice of Ireland10. Respondents were representative of the structure of Irish general practice. Another limitation may be the reliance on self-reporting of diagnostic behavior (survey methodology). Despite these limitations, the present study adds important insights on the diagnostic and referral practices of Irish GPs in assessing those who may have dementia.

In conclusion, the current study found that most GPs diagnose three or less patients with dementia per year and refer most patients on for further support. Referral is usually to a geriatrician, most often to clarify a diagnosis. Clinical assessment with direct and collateral history, physical examination and screening tools (particularly the traditional sMMSE) are characteristic of dementia assessment in Irish general practice. Most GPs report having never received postgraduate training on dementia diagnosis and would welcome opportunity for such. Further development of memory clinic services, particularly in areas serving large numbers of patients with dementia without such services is supported by the present study, as in the increasing inclusion of cognitive assessment and dementia diagnosis on postgraduate medical curricula.

Conflict of Interest
None to Declare