Correct technique with inhalers is vital for therapeutic effect. Efficacy of DVD inhaler instruction was investigated. Secondary aims were to examine feasibility of an inhaler technique outcome measure, and to compare knowledge and self-efficacy after DVD or individual education. This was a randomised controlled trial conducted in a regional hospital paediatric ward, involving new or existing paediatric inhaler users. Inhaler technique was assessed pre-education in existing inhaler users. Participants were then randomised to message equivalent education by DVD or individually with a physiotherapist. Inhaler technique, self-efficacy and knowledge were assessed immediately post- and three months after education. Twenty one participants received DVD or individual education. There were no significant differences between groups for technique, self-efficacy or knowledge at any time. The outcome measure was feasible for use in a research study. DVD education was equivalent to individual instruction to teach parents how to use inhalers with their child.

Introduction
Inhaler misuse in the US costs $5-7 billion annually in medicine waste alone3. Correct use of inhalers requires specific training. However, rates of correct inhaler use even immediately after instruction may be as low as 57.4%1. A study of medical interns found that 95% were unable to use a metered dose inhaler (MDI) correctly2. Education should be high quality and repeated to maintain correct inhaler technique1. A recent systematic review8 reported that children’s inhaler technique improved significantly immediately after any education. However, these authors reported that very little research has been conducted on the content of inhaler technique education. The authors could not determine the type of education most likely maintain inhaler technique over time, a well-recognised issue in both paediatric12, and adult9 inhaler education. When studies did not separate findings relating to MDI and dry powder inhaler (DPI) technique, the authors assumed findings related to MDIs, even though inhaler errors are more common with MDIs than DPIs7.

In a prospective study13, inhaler technique improvements were shown over the course of 9 months after viewing an educational video. However, with no control group, improvements cannot be attributed solely to the education. All participants were required to use an MDI and Valved Holding Chamber (VHC) with mouthpiece, despite best practice guidance stating that children under four years should use a VHC with facemask10. Some improvements in technique may have been due to maturation of participants over the course of the study; increasing age correlated directly with higher scores. If DVD education is equivalent to individual instruction, this could provide a cost effective method of repeating education of a consistently high standard, suitable for vulnerable users such as those with low literacy levels4. This study’s primary objective was to investigate the proportion of steps for optimal inhaler technique that children under 16 years old demonstrate immediately following DVD education compared with individual instruction. Secondary objectives were to compare inhaler technique 3 months post intervention in both groups, compare self-efficacy and inhaler knowledge, and to develop a reliable measure to assess inhaler technique.

Methods
This was a randomised, single blinded controlled trial. The study was conducted in the paediatric ward of University Hospital Kerry, using a convenience sample of children admitted from January-March 2014. Children prescribed inhalers during their hospital stay or already using inhalers on admission were invited to participate. Participants had a variety of causes for wheezing necessitating inhaler use, including asthma, exercise induced bronchoconstriction etc. Participation was not limited to children with medically diagnosed asthma, due to the difficulty of making this diagnosis in very young children10. There was no lower age limit for study participants. Previous respiratory admissions or length of time using inhalers prior to study enrolment were not recorded.

Participants were randomly allocated to one of two groups. The intervention group received inhaler instructions via a purpose-made DVD. The usual care group received individual instruction from a physiotherapist. Random allocation was maintained by generating a list via a random number generator, to which participants were added on enrolment. Random allocation sequence, participant enrolment and group assignment were performed by the lead investigator, who was not involved in measurement. Prior to education, non-naive participants (previous inhaler users) were videoed using a placebo inhaler in their usual way. The VHC with facemask was the AerochamberTM and the VHC with mouthpiece the VolumaticTM.

The intervention group watched a DVD which was developed specifically for this study, demonstrating correct use and cleaning of the VHC and MDI. This group watched the DVD as many times as desired, and practised with a VHC and placebo MDI. Participants then demonstrated their technique on video, and were given a copy of the DVD for home viewing. The individual education group received standardised, scripted individual education from a physiotherapist, message equivalent to the DVD. The physiotherapist demonstrated the technique with a VHC and placebo MDI, and then participants demonstrated their technique and were given feedback. Finally, participants demonstrated their technique on video. All participants were given a leaflet with instructions given during the education. This contained a link to inhaler technique video tutorials on The Irish Asthma society website (www.asthma.ie). All parents/carers then completed an anonymised questionnaire, which included self-efficacy scales and true/false inhaler knowledge questions. Three months later, participants’ technique was re-recorded. Participants were asked (via anonymised follow-up questionnaire) if they had watched the DVD (intervention group), or accessed the Irish Asthma Society website since the education. The self-efficacy scales and inhaler knowledge questions were also re-examined.

The primary outcome measures were checklists derived by the authors from VHC manufacturers’ instructions. Two checklists were used; one for the VolumaticTM and one for the AerochamberTM. Three senior physiotherapists with a minimum of 10 years’ experience each individually viewed each recording three times prior to scoring6. Raters were blinded to group allocation and other raters’ scores. The number and proportion of correct steps performed was calculated for each participant. A mean of the three raters’ proportional scores for each video was then obtained. Intra-rater reliability of the checklists was assessed by the same assessors re-scoring three randomly selected videos three weeks after the initial rating. The raters were blinded to the previous score they had given. Secondary outcomes were self-efficacy and knowledge. Abbreviated versions of the attack prevention subscales of the Parent Asthma Self-Efficacy Scale, and, where appropriate, the Child Asthma Self-Efficacy Scale5 were used. These were adapted to cater for heterogeneous participants. As some participants did not have medically diagnosed asthma, some items were not appropriate. Five true/false questions tested knowledge acquisition.

Data were manually entered into a MicrosoftTM Excel (2010) spreadsheet and SPSS software (version 21) was used in data analysis. Between-group differences at baseline were assessed using Fisher’s exact test. Friedman’s test was used to test for change between the three time periods between the two groups. The intra-class correlation co-efficient (ICC) was calculated for each rater’s scores for each of the three videos randomly selected to be scored twice by each rater, to determine intra-rater reliability. Inter-rater reliability was assessed by calculating the ICC for the three raters’ scores for each subject. Results of the likert-type abbreviated attack prevention subscales of the Parent Asthma Self-Efficacy Scale and the Child Asthma Self-Efficacy Scale6 were displayed as medians, modes and frequencies. Cronbach’s alpha was calculated to assess internal consistency for the four items at both times of testing. Results of the likert-type self-efficacy were displayed as medians, modes and frequencies. Ethical approval was granted by the Clinical Research Ethics Committee of the Cork Teaching Hospitals, Ireland (ECM 3 (qq) 15/11/13). 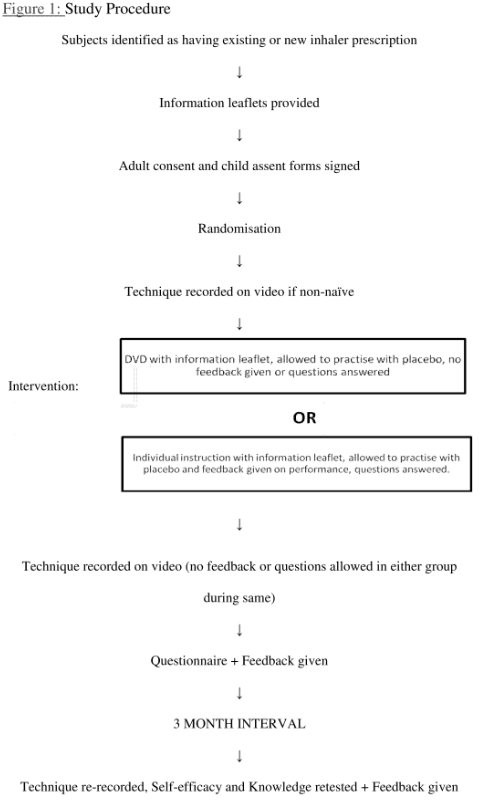 Results
Phase one of data collection (initial recruitment, education and first video) occurred from January-March 2014. Of 34 children and parents/guardians invited, 24 consented to participate. Three were excluded, prior to data collection, due to inconsolable crying. There were 11 participants in the DVD group and 10 in the instruction group. There were no statistically significant differences between groups at baseline.

There was a statistically significant improvement in inhaler technique score immediately after education across all subjects (p= 0.04). The median score for all participants was 0.83 (maximum=1.00) at baseline, rising to 0.90 immediately post intervention, and deteriorating slightly to 0.88 at three months. The median improvement between pre- and post-intervention was 0.08 points on the proportional inhaler technique score. The median change for all participants from immediately post education to three months follow up was a deterioration of 0.03 points, (p= 0.245).

There were no significant between-group differences either immediately post intervention, or after three months (table 2). The median DVD group score was improved after three months, whereas the median score for the individual education group deteriorated. The change between immediately post and three months post intervention was not statistically significant in either group (p= 0.135, p=0.526 for the DVD and individual instruction groups respectively). (Table 2)

Half of DVD group participants (n=5) reported re-watching the DVD more than once at home, versus 10% (n=1) in the individual instruction group who reported accessing the website as directed on the information leaflet more than once (Figure 2). 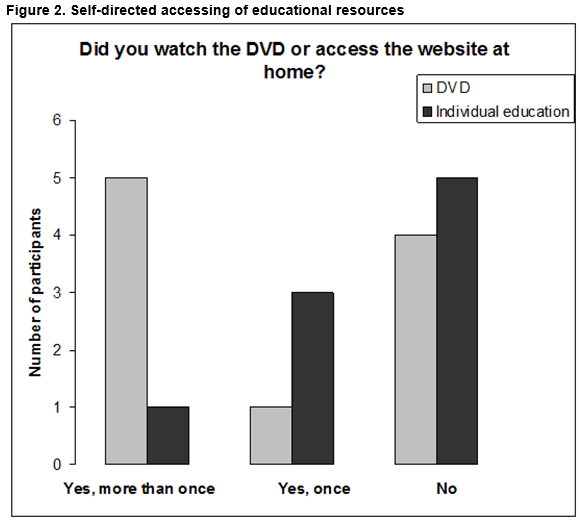 The inhaler technique checklist had high intra-rater reliability for each rater; 0.98 (.67-.99), 0.96 (0.46-.99) and 0.95 (0.44-0.99) (95% CI in brackets) respectively. Inter-rater reliability was also very high; ICC=0.98 (95% CI 0.97-0.99). The items the abbreviated versions of the Parent Asthma Self-Efficacy Scale and the Child Asthma Self-Efficacy Scale5 showed excellent internal consistency (Cronbach’s alpha= 0.93), and thus a composite score for the 4 items for each time period was obtained. The groups were not significantly different from each other at either time point (Mann Whitney U p=0.80, p=0.40 for post and follow up respectively). There were no significant differences between groups at any time point for knowledge. (p=1.00 and p=0.49 immediately post and three month follow up respectively).

Several participants had poor technique (fewer than 65% of steps performed correctly) even after education, and needed further correction after data collection. This illustrates that technique must still be checked by a healthcare professional, as per best practice guidlines10, and that self-assessment of technique is often inaccurate1. The newly developed checklist for measuring inhaler technique demonstrated excellent intra- and inter-rater reliability, and was feasible for use in a randomised controlled trial.

The study population was heterogeneous; not all participants had asthma. It was not feasible to require medically diagnosed asthma, as diagnosing asthma in very young children is very difficult10. However, it was important to include very young children, as younger age is a risk factor for poor inhaler technique8. As a result, asthma questionnaires were not suitable. There is no measure of self-efficacy regarding inhaler use which does not include asthma specific items. Self-efficacy was found to be high in both groups both immediately post and three months post education. It appears from this research that both methods are equally effective in achieving and maintaining self-efficacy in inhaler use. However, as self-efficacy was not measured pre-education, it is not known if there was a change from baseline. The outcome measure to assess inhaler technique needs to be validated using lung deposition studies. As per Gillette et al8, this would help to determine which steps are essential and non-essential to achieving drug delivery to the lungs.

In conclusion, DVD education has been shown to be as efficacious as a time consuming interaction with a healthcare professional. This could facilitate improvement of inhaler technique in the patient’s own home, with no additional cost associated with repetition of the education, which has been shown to increase likelihood of correct technique1. The DVD used in this study could very easily be used with a voiceover in a different language, facilitating non-native speakers, known to be at increased risk of poor inhaler technique11.

However, without further research regarding the effect of improved inhaler technique on asthma control associated outcomes, such as hospital admissions, a cost-benefit analysis is not possible8. Some participants needed correction to their technique even immediately after education. This indicates inhaler users must have their technique checked regularly by a healthcare professional, as is internationally recognised best practice10.

Conflict of Interest
The authors declare that there is no conflict of interest.

Acknowledgements: The authors would like to sincerely thank Noel Keane for his videography expertise, and the nurses in Cashel Ward, University Hospital Kerry, for their assistance with participant recruitment.