Dysphagia is a risk factor for adverse health outcomes like aspiration, recurrent chest infections and malnutrition. Here, we describe a case of an 82-year-old lady who presented with a two-month history of dysphagia after an anterior odontoid screw fixation for a type II odontoid process fracture. This case highlights the importance of a multidisciplinary approach to patient care.

Case Report
An 82-year-old lady presented to our service with a two-month history of dysphagia to solids, dry retching, and unintentional weight loss of about 6 kg. The patient reported intermittent choking episodes on large tablets and a sensation of pharyngeal residue during and after meals. She denied odynophagia. Laryngoscopy and oesophago-gastro-duodenoscopy showed no significant deficits. A clinical bedside assessment carried out by Speech and Language Therapy (SLT) found no overt signs of penetration or aspiration on oral intake and a mildly dysphonic vocal quality. A Fibreoptic Endoscopic Evaluation of the Swallow (FEES) was carried out which showed a bulge in the posterior pharyngeal wall. The epiglottis was noted to meet the posterior pharyngeal wall at times at rest. Severe vallecular residue and mild airway penetration were observed on all diet consistencies. A Videofluoroscopy (Figure 1) completed to support the findings of the FEES, visualised an odontoid screw which was protruding into the posterior pharyngeal wall at the level of the fourth cervical vertebrae. The protrusion resulted in limited epiglottic deflection and therefore reduced airway protection. The 4.6cm odontoid screw had been inserted anteriorly by Neurosurgery two months earlier for an odontoid process fracture type II secondary to a fall. The patient had been self-modifying her diet and was provided with further information from the SLT regarding diet consistencies which were easiest and safest to swallow. The patient was also referred to a dietician during this admission. Her care was then referred for assessment to neurosurgery. Five weeks later, she had the odontoid screw removed. The patient’s ability to tolerate her normal diet subsequently improved. One month after the removal of the odontoid screw, she reported no symptoms on reassessment of swallow and had started to regain weight. 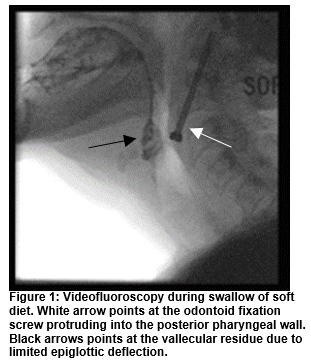 Discussion
Dysphagia after anterior cervical surgery is a relatively common occurrence ranging from 30% to 50% in the early postoperative period. This is felt to be a transient finding with the vast majority of cases resolving within three months2. Vasudevan et al reported gastrostomy tube placement due to patient failing swallow evaluation in 13 of 30 consecutive elderly patients with type II odontoid fractures treated with anterior odontoid screw fixation3. Patients during this period are at risk of aspiration, recurrent chest infections and malnutrition and hence, adverse health outcomes.

Videofluoroscopy or modified barium swallow has been considered the instrumental examination of choice in the study of swallowing, in addition to clinical history and bedside assessment. It plays a relevant role in diagnosis and monitoring of rehabilitation treatment for dysphagia, either by means of ascertaining the efficacy of dietary modifications, such as restricted-consistency diet, and/or of the compensatory postural manoeuvres. It has the advantage of the possibility to see the recorded images again immediately, even while the examination is still being performed4. FEES was also very important in the management of this case.

Dysphagia evaluation and management are usually a multidisciplinary team approach and are based on careful history, differentiation of an oropharyngeal dysphagia from oesophageal dysphagia and identifying the underlying cause1. Regarding behavioural management and therapy, speech-language therapists play a central role in the management of these patients; no single strategy is appropriate for all elderly patients with dysphagia5. Our patient required neurosurgical intervention and had a successful outcome after the odontoid screw removal. At follow up, the patient’s dysphagia had resolved and an improvement in weight with dietary advice was noted.