Ectopic Duodenal Varices: A rare cause of upper GI bleeding

Dear Sir,
Ectopic duodenal varix is a rare cause of upper GI bleeding. Bleeding from the varices can be massive and life-threatening. There is no optimal treatment has been established. A 93-year-old man was initially admitted with pneumonia. His past medical history includes early Alzheimer’s disease, rheumatoid arthritis, polymyalgia rheumatica, heart block, and hypertension. He took methotrexate, folic acid, aspirin, prednisolone and bisoprolol regularly. One week post admission, he developed acute onset of coffee ground vomiting and melena. Vitally, he was stable (BP 110/70, HR 60bpm). Haemoglobin dropped from 11.3 g/dL to 7.9 g/dL. He was transfused with 2 units of packed red blood cells and treated with continuous intravenous pantoprazole infusion.

The patient subsequently underwent OGD, which revealed markedly tortuous varices over the second and third portions of duodenum (A and B). No evidence of active bleeding. However, there were a few red signs visible on the duodenal varix (B). Otherwise, OGD showed only mild reflux oesophagitis, with no evidence of oesophageal/gastric varices or portal hypertensive gastropathy. He received no endoscopic intervention. He was treated further with intravenous terlipressin for 3 days. Search for evidence of portal hypertension however was unsuccessful. No previous chronic liver disease (CLD) was documented. Patient denied any alcohol intake. Physical examination revealed no peripheral signs of CLD. Liver function test were normal including the albumin, electrolytes, platelet and INR. Abdominal ultrasound demonstrated normal liver, spleen and portal flow.

Ectopic varices are dilated portosystemic collateral veins that found in uncommon locations (other than gastroesophageal region)1. Up to 5% of all variceal bleeds are caused by ectopic varices, with duodenal varices being the most common culprit2. Causes of ectopic varices include portal hypertension (intrahepatic or extrahepatic), anomalies in the venous outflow vessels, vascular thromboses, surgical procedures involving abdominal organ/vessels and familial1. 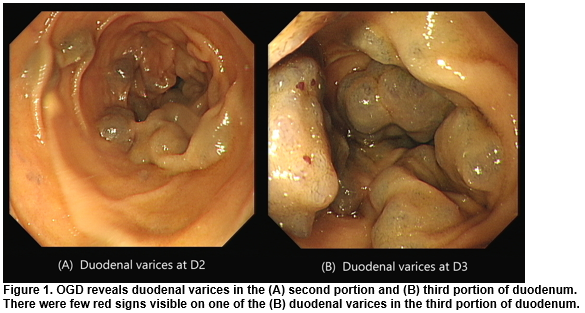 However, in our case, no recognized cause was found. In view of patient’s advanced age and multiple comorbidity, we decided not to pursue on finding the aetiology of ectopic varices. There is no established treatment for duodenal variceal bleeding. Some case reports showed good hemostasis control with endoscopic injection sclerotherapy. In failed sclerotherapy, TIPS (for cirrhotic patient) has been used with a good effect. Another case study reported a 3-years symptom free in a patient who had simple oversewing of the duodenal varices through a duodenotomy3.