Emergency Aeromedical Services in Ireland – A Single-Centre Study in 2014

This retrospective analysis includes patients requiring Emergency Aeromedical Services (EAS) in 2014. The aim of this paper is to evaluate the HEMS service in a single centre and to accurately assess whether certain internationally validated criteria can predict admission rates better than the currently used criteria. Using the American College of Surgeons (ACS) trauma-related dispatch criteria, each case was retrospectively evaluated. Results showed the mean total criteria met were 2.73 (σ=0.88) and 1.45 (σ=0.82) in admitted and discharged patients respectively. The total criteria met had a significant predictive value on admission rates (p<0.05). Increased admission rates were shown in patients with a high Mechanism of Injury (MOI) (p<0.05). False positive rates of HEMS transfer were higher when applying the current criteria compared to the ACS criteria. ACS total criteria can predict admission in HEMS patients with a higher specificity than currently used guidelines.

Helicopter Emergency Medical Services (HEMS) have been widely used to facilitate effective and timely patient care internationally1. Multiple large multi-centre trials have confirmed a survival benefit associated with the use of HEMS2-4. HEMS is known to have an appreciable effect on patient outcomes also5-6. Optimisation of dispatch criteria is of utmost importance to improve appropriate resource management.

The Irish Emergency Aeromedical Services (EAS) were setup in 2012 in collaboration with the Health Service Executive (HSE) National Ambulance Service (NAS). It is described in the ‘MEDEVAC 112’ document7. The algorithm for service activation is outlined in Table 1. The activation pathway for HEMS includes use of the Appropriate Hospital Access (AHA) criteria outlined in the NAS document NASCG0098. These criteria are not very concise when compared with the ACS criteria and may be complicating the dispatch process in Ireland currently.

American College of Surgeons (ACS) guidelines suggest a HEMS overtriage rate of up to 50%. This will ideally reduce the undertriage rate to 10%9. Many researchers have attempted to identify criteria that can accurately predict an appropriate dispatch algorithm model10-12. The aim of this paper is to evaluate the HEMS service in a single centre and to accurately assess current guidelines to determine whether alternative criteria could be more predictive of admission.

This was a retrospective analysis of the HEMS to a single centre in 2014. The Emergency Department (ED) admission log was referenced to confirm patient mode of admission. All patients admitted via helicopter were included. A retrospective chart review was performed. Helicopter transport times were calculated using the EAS log. There is no specific reference to the criteria met prior to dispatch for HEMS in the EAS log. This limits analysis of the currently used dispatch criteria and emphasises a major flaw in the transparency of the current system. The ACS trauma-related dispatch criteria were retrospectively applied to these cases for comparison. Simple comparisons were made between the two criteria sets. The ACS criteria included ‘Mechanism of Injury’ (MOI), ‘Need for Advanced Trauma Life Support (ATLS)’, ‘Age <5/>55’, ‘Need for helicopter transport based on road accessibility’, and ‘Likelihood of prolonged transport’. The first 4 criteria were calculated using information from the EAS log and chart review in the ED.

The likelihood of prolonged transport was determined by comparing predicted GEMS transport time, using Google Maps©, to actual recorded HEMS flight times. Each case was then evaluated using the retrospective ACS criteria met and whether this number of criteria could predict likelihood of patient admission. False positive rates were also calculated for the current criteria used by EAS by assessing those patients who were transferred to hospital via HEMS then not admitted. The two sets of criteria were compared in this regard also. Sensitivity and specificity values were calculated for each ACS criterion. Undertriage (1-sensitivity) and overtriage (1-specificity) rates were also calculated. Descriptive statistics and simple logistic regression models were used to determine a correlation between total criteria met and discharge rates. Fisher’s exact test was used to establish whether there was a correlation between individual criteria met and patient discharge. The statistical and graphics package used was Stata©/IC 13.1 for Mac (64-bit Intel). 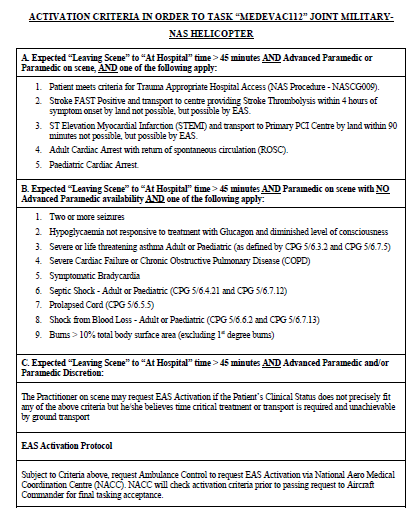 Thirty-nine patients were accurately identified as being transferred via HEMS in the year 2014 to Tallaght Hospital (Table 2). Twenty-six had complete datasets. The mean patient age was 38.6 (σ=20.88). The mean length of stay (LOS) was 4.84 days (σ=12.64, range 0-74). Two patients died within 24 hours of admission due to drowning and subarachnoid haemorrhage. Ten patients underwent operative management whilst 2 were admitted to ICU. Twelve patients (44%) were discharged from the ED without admission. Five of those not admitted were transferred directly to other centres for further management. The commonest reasons for referral were plastic surgery input (50%) and paediatric specialist input (38%). HEMS incurs a significant workload on the orthopaedic department which was the most frequently admitting specialty and so subset analysis was performed. Fifty percent of all admissions were under orthopaedic care and 67% of orthopaedic admissions were from other catchments (Fig1). Notably, the mean LOS in orthopaedic patients was much higher at 11.9 days. Four of these had pelvic and acetabular injuries which is relevant given that Tallaght Hospital is the Irish National Pelvic and Acetabular Unit. 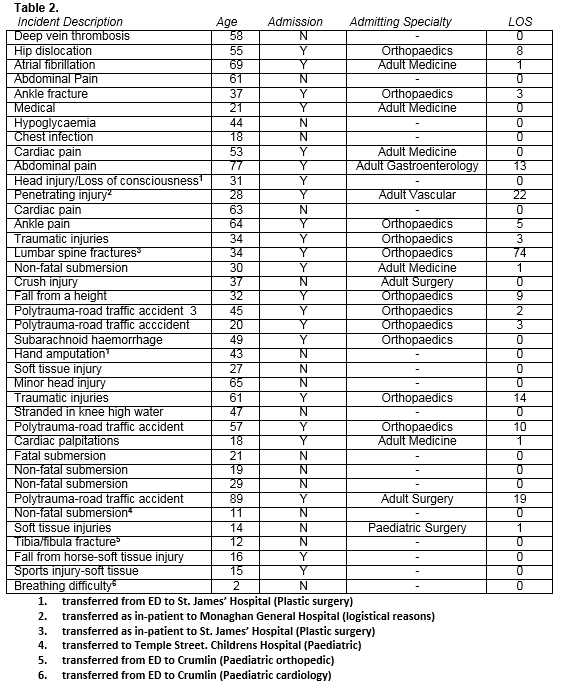 Currently used dispatch criteria were examined showing a 31% discharge rate of all patients who were deemed eligible for HEMS initially. This describes a group that did not require HEMS transport. Many of these were minor soft tissue injuries not requiring admission. In comparison, the false positive rate associated with using any one of the 5 retrospective ACS criteria for HEMS dispatch was better at 27%.

Analysis of individual criteria showed that a high ‘MOI’ was the commonest single criterion met (46%) with the highest sensitivity for admission at 63.6%. When analysing all patients, univariate analysis demonstrated a significant increase in admission for those patients with a high MOI versus those without (p<0.05). No other criteria were statistically significant. However, analysing patients who were directly transferred to other units in the ‘discharged’ group is an obvious source of error. With this in mind, univariate analysis of all patients (excluding those 5 transferred directly to other units) showed a strong increase in admission for patients with a high MOI (p<0.01), and also an increase in admission for those patients requiring ATLS (p<0.05). Simple logistic regression analysis confirms that the total number of criteria met in HEMS patients has a significant predictive value regarding whether or not the patient will be admitted (p<0.05). This significance holds true regardless of whether the ‘direct transfer’ patients in the ‘discharge’ group are included in analyses or not. 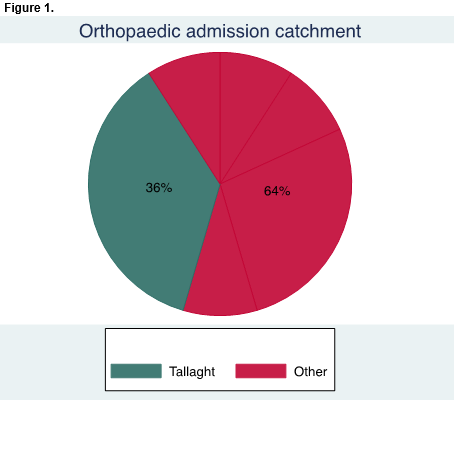 The mean difference in travel time per patient was 2.9 minutes longer by helicopter than by predicted GEMS. HEMS in reality is likely to be quicker than GEMS given the time needed for on-site management, transfer and traffic consderations. This is a direct clinical benefit of all patients being transferred by HEMS and allows expedient care in an appropriate referral centre. 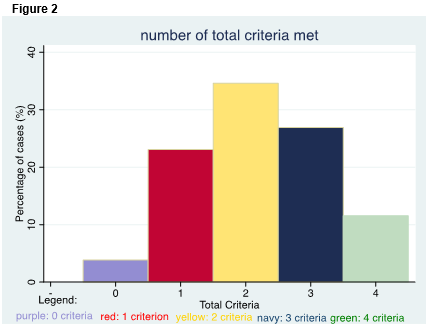 The purpose of this study was to ascertain whether the ACS criteria applied can predict the likelihood of admission in the HEMS patient group and whether it is a potential alternative to currently used dispatch criteria. These results support the use of ACS guidelines as a significant difference in total criteria met between admitted and discharged cases was identified (p<0.05). ACS criteria can also reduce the false positive rates of HEMS transfer patients by 4% when compared with current criteria used. We cannot directly compare the clinical benefits of those transferred by HEMS compared to those by GEMS as information regarding HEMS requests that were not granted is not available. We can only assume that likely improved transport times confer a clinical advantage to HEMS patients versus GEMS patients.

‘MOI’ is the most sensitive criterion at 63.6%, giving a low rate of undertriage (36.4%). This contrasts with certain studies which question the use of ‘MOI’-based criteria due to poor sensitivity rates13. ‘MOI’ has the strongest significant univariate effect on admission rates (p<0.05) with a high specificity (76.5%). It is important to note that 5 of the 12 patients that were brought by HEMS and not admitted were not discharged directly home. If the relevant specialty was available in our unit, these patients would have been included with the ‘admitted’ cohort for analysis. This is a potential source of inaccuracy in the data which has been allowed for in our calculations. Similar to the findings of Gibbons et al. in 2013, an increased time for transport in the HEMS versus predicted GEMS times was recorded6. Limitations exist here, however, one can safely assume that on-scene management, patient transfer and traffic considerations would surpass 2.9 minutes in total for these cases. It follows therefore that HEMS is still likely to be faster than GEMS in reality.

The HEMS system in Ireland is in its infancy with a need to improve the accuracy of centralised data collection. Inadequate records meant that we were unable to assess the number of criteria met before dispatch using the current system.This service however is robust and very effective in the transport of critically ill patients. Our results have shown that the ACS criteria are effective in determining admission rates in this HEMS patient cohort with acceptable sensitivity and specifity rates as a threshold for dispatch. One can appreciate the value of ‘MOI’-based dispatch criteria due to the highly significant predicitive value of ‘MOI’ on admission rates.

Consideration should be given to the Hospitals that facilitate this service through the provision of helipads. These patients consume theatre, intensive care, radiographic and staff resources. This should be accounted for at a national level with these implications in mind. Continued research into this developing area of HEMS in Ireland is essential in the future to optimise it as a service and to bring it up to international stndards.

This study did not require funding of any kind.

There are no conflicts of interest regarding the conducting or publishing of this work.

All procedures performed in studies involving human participants were in accordance with the ethical standards of the institutional and/or national research committee and with the 1964 Helsinki declaration and its later amendments or comparable ethical standards.

This was an anonymous clinical audit that was fully sanctioned by the hospital audit department. Informed consent was therefore not required from individual participants as this was a fully anonymous audit (confirmatory email enclosed).