Epidemiology of Injury in Gaelic Handball

The initial step in developing injury prevention strategies is to establish the epidemiology of injury. However there has been no published research on injury in Gaelic handball. This study describes the epidemiology of injury in 75 Gaelic handball players utilising a retrospective questionnaire. 88% of participants reported one or more injuries. Injuries to the upper limb were prevalent (52.9%), followed by the lower limb (30.3%). The shoulder (17.6%), finger (10.5%) and ankle (9.8%) were the primary sites of injury.  Injuries occurred most frequently in December (9.7%), January (9.7%), February (9.7%) and November (8.7%). Injuries predominantly occurred during games (82.4%). Injuries were primarily severe (54.7%), with 14.6% of participants admitted to hospital due to injury.  Given that this is the only study on Gaelic handball to date, prospective epidemiological studies and further research on injury prevention strategies are necessary.

Seventy five handball players (14-66 years) completed a self-report questionnaire that was based on a retrospective questionnaire implemented in Gaelic footballers3. The questionnaire comprised of 28 questions and was divided into two sections.  Section one related to the participants’ body dimensions, type and amount of handball played, limb dominance, injury prevention methods used and other sports played. If a participant received an injury while playing handball, they completed a separate section two form per injury. Section two required detail on the location, side, type, mechanism, severity, time, treatment received, outcome, reoccurrence and month of injury. The National Handball Council of Ireland distributed the questionnaire to all secretaries in Ireland for distribution to handball clubs. Ethical approval was granted by Dublin City University Ethics committee. An injury was defined as “one sustained during training or competition resulting in restricted performance or time lost from play”3.  A warm up was defined as a period of preparatory exercise designed to “(i) improve a muscle’s dynamics so it’s less inclined to injury; and (ii) prepare the athlete for the demands of exercise”4. Injury severity was defined according to days lost from playing handball and was subdivided into a minor injury (≤7 days), moderate injury (8-21 days) and severe injury (>21 days)5. 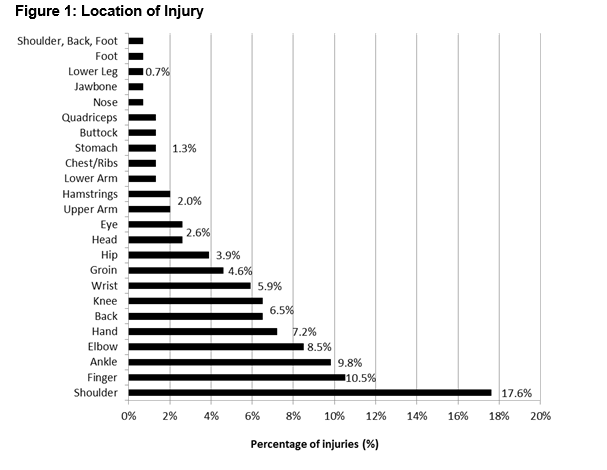 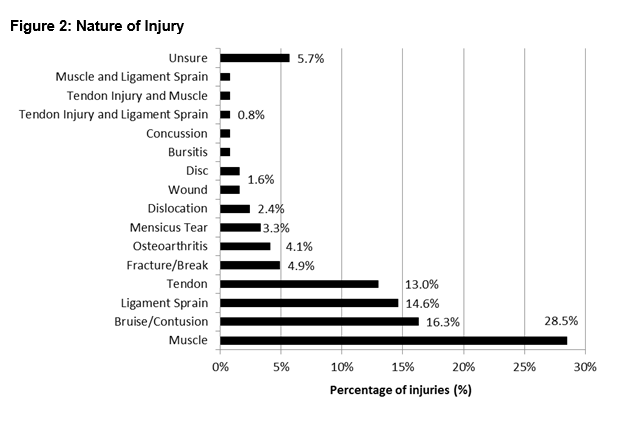 The majority of participants (88%) sustained an injury during their handball career, with a total of 155 reported injuries. Injuries primarily occurred in the upper limb (52.9%), 30.3% in the lower limb and 16.8%in the trunk and head. The most common location for an injury was the shoulder, followed by the finger and ankle (Figure 1). The majority of injuries occurred on the right side (67.3%), 23% on the left and 9.7% bilateral. December (9.7%), January (9.7%), February (9.7%) and November (8.7%) were the most common months to become injured. Injury predominantly occurred during a game (82.4%), followed by a training session (13.6%), warm-up (1.4%) and cooldown (0.7%).  Muscle strains were predominant followed by bruise/contusions, ligament sprains and tendon injuries (Figure 2). Swinging to hit the ball was the primary cause of injury, followed by impact from the ball, pain without a traumatic incidence and collision with player/wall (Figure 3).  Participants predominantly temporarily discontinued playing/training (61.7%) because of the injury. Injuries were primarily severe (54.7%), followed by moderate (31.3%) and minor (14.1%).67.4% of injuries required treatment by a medical professional and 14.6% of participants were admitted to hospital due to the injury. 19.2% reported the injury as a reoccurring old injury, with 68% of reoccurring injuries originally due to playing handball and 32% due to injury that occurred in another sport or activity of daily living.

Handball has been thought to be a male orientated sport1 which is supported by this study. While handball players most commonly play the40/20 code of handball, a large amount of participants also play a combination of codes. Each code has a different season and their competitions takes place at different times during the year. Thus handball players could be required to play in effect two, three or even four season’s worth of matches. Participants predominantly played at the masters’ level, but combinations of levels were also commonly played. Thus, some participants are not only playing different codes of handball but also playing at various levels. However, the low hours spent in training each week indicates that handball tends to be largely recreational. Participants reported a similar right hand dominance to male (82%) and female (91%) veteran tennis players6. The right hand dominance noted may be related to the high incidence of injury on the right side and further research between side of injury and dominance in handball is recommended. Ambidextrous players were more common than left hand dominant players, which is expected as this is advantageous to performance in handball. While the majority of participants completed some form of a warm-up, it was slightly lower than athletes playing upper body sports (91.7%)7 or adolescent squash players (93%)8. Handball players tend to warm up for a duration close to the recommended 10-15 minutes, but at the lower scale of the recommendation9.

Eye goggles, gloves and glove lining were the most commonly used protective equipment worn together while playing handball. The wide use of eye goggles is expected, as they are mandatory in the 40/20 code of handball. While gloves are mandatory in the 40/20 code of handball, they are primarily used to keep the ball dry rather than for injury prevention purposes. Since bruises/contusions were common, the introduction of glove lining, especially in hardball where the ball is harder than other codes could help reduce injuries to the hand and fingers. Injuries were predominant in the upper limb which is expected due to the demands of the game where the use of the upper limb is an integral component of the game. Injuries primarily occurred in the shoulder and a similar percentage of injuries is reported in tennis (12-17%)10. The ankle was also commonly injured in handball, with a similar percentage occurring in tennis (7%)10. Notably only 2.6% of injuries occurred to the eye, which indicates that the mandatory use of eye goggles is effectively preventing eye injuries in handball. Soft tissue injuries were predominant, with muscle strains, bruise/contusions and ligament sprains common. Muscle strains were also the primary nature of injury received in badminton, however they were more frequent (64%)11 than in handball. A similar percentage of ligament strains (14.4%) occurred inbadminton11, however bruises/contusions were far more common in handball. This high incidence of bruises/contusions could be due to the size, nature and speed of the ball used in handball1.Serious injuries like fractures/breaks were not as common as soft tissue injuries and only accounted for 4.9% of injuries.

Swinging to hit the ball was the most common cause of injury which could be related to the large number of upper limb and shoulder injuries. Swinging to hit a ball has been identified as a possible risk factor for injury in overhead sports due to inappropriate swing mechanics coupled with the repetitive nature of the swinging action12. Impact from the ball was also frequent and may be related to the large amount of bruises/contusions noted, thus the introduction of protective pads could reduce injuries. Pain without traumatic incident was common and may be related to overuse injuries due to inappropriate training or defective biomechanics. Collisions with a player/wall were common in handball and may be related to tactics, as players aim to skim the ball along the side wall to make it more difficult for their opponents to return the ball. The four most common months injury occurs corresponds to the beginning (November/December) and height (January/February) of the 40/20 season where players would play an increased number and enhanced intensity of games. Injuries primarily occurred during games, which is expected as intensity is increased and there are usually much larger physical and physiological stresses placed on the athlete which could increase injury risk11. Surprisingly, a large percentage of handball players continued to play/train regardless of receiving an injury despite the risk of further exacerbating the original injury. Out of the61.7% participants who discontinued playing/training, severe injuries predominated, however, it has been demonstrated that participants tend to only remember and report more serious injuries that require prolonged absence from sport in retrospective studies13,14. Thus further prospective research is required. A fifth of injuries were a reoccurrence of a previous injury, which may be due to incomplete rehabilitation, unidentified biomechanical deficiencies or training errors15.

There are a number of limitations to the current study. This is a retrospective study which is considered inferior to a prospective research design as they are less reliable due to recall bias and imprecise estimations of the injury13,16. However, as this is the first study of its kind on the epidemiology of injuries in handball, the information provided is still beneficial. The injury data was gathered using a self-report questionnaire which may not be entirely accurate and may overestimate the severity of the injury17. In addition, injury rate was calculated as a percentage only due to the method of data collection used, and so exposure to handball could not be taken into account.  While the percentage of injury reported is related to injuries suffered directly due to handball, 68.5% of those who completed the questionnaire were involved in other sports which may have exacerbated or contributed to the injuries. Despite the limitations of this retrospective study, it has demonstrated that injuries are common in handball with 88% of all participants sustaining an injury. The epidemiological data presented in the current study is the first of its kind in Gaelic handball and so the current authors propose that prospective epidemiological studies should be implemented. Further research on risk factors for injury and injury prevention strategies specific to handball should be designed.

Comhairle Liathróid Láimhe na hÉireann for their assistance in the distribution of the questionnaire.

9. Midgley AW, Mc Naughton LR. Time at or near VO2max during continuous and intermittent running: a review with special reference to considerations for the optimisation of training protocols to elicit the longest time at or near VO2max. Journal of Sports Medicine and Physical Fitness. 2006;46:1-14.

13. Junge A, Dvorak J. Influence of definition and data collection on the incidence of injuries in football. The American Journal of Sports Medicine. 2000;28:S-40-S-6.