The study illustrates advantages of Fiberoptic Bronchoscopy, a new service started at St. Luke’s General Hospital in patient care since April 2014. Retrospective review of Bronchoscopies and referrals to Tertiary care unit for Bronchoscopy, prior and after initiation of service at St. Luke’s Hospital were studied. In total, 106 procedures were performed out of which 103(98%) were for diagnostic purpose. Common indications for bronchoscopy were functional airway assessment in 38 cases (35%) of chronic cough, 26 cases (24.8%) of suspected malignancy. The average time taken for procedure was 15 + 1 minute with overall rate of complication recorded in 1 case (0.95%). 32(30%) inpatients were referred before bronchoscopy services were started locally. Fifteen (14%) patients were referred for Endobronchial Ultrasound (EBUS) after diagnostic procedure performed at St. Luke’s Hospital. To conclude, Bronchoscopy is a safe procedure used for diagnosis of various Lung conditions. The services offered locally reduced the time and cost involved in referrals. The diagnostic bronchoscopies performed for malignancy at St. Luke’s Hospital have rightly increased references for EBUS at Tertiary care Unit.

Bronchoscopy has evolved as a commonly used diagnostic tool in pulmonary medicine. Flexible fiberoptic Bronchoscopy (FB) was initiated at St. Luke’s General Hospital in April 2014 and catered to service of patients since then. The aim of our study is to discuss the benefits of conducting FB at our General Hospital in terms of better patient management and reduction of referral time and expenditures incurred in referring patients to units at the tertiary care centre.

We retrospectively analysed the bronchoscopy procedures and related patient data, performed at St. Luke’s General Hospital over a duration of 1 year (April 2014-2015). Demographics of patients e.g. age, gender, were studied. Patients rendered services were classified as Inpatient/outpatient. Indications for procedure, time taken, rate of medication used for sedation, any complications related to bronchoscopy were recorded. Referrals for bronchoscopy to tertiary care before and after the services were started at St. Luke’s General Hospital were analysed. 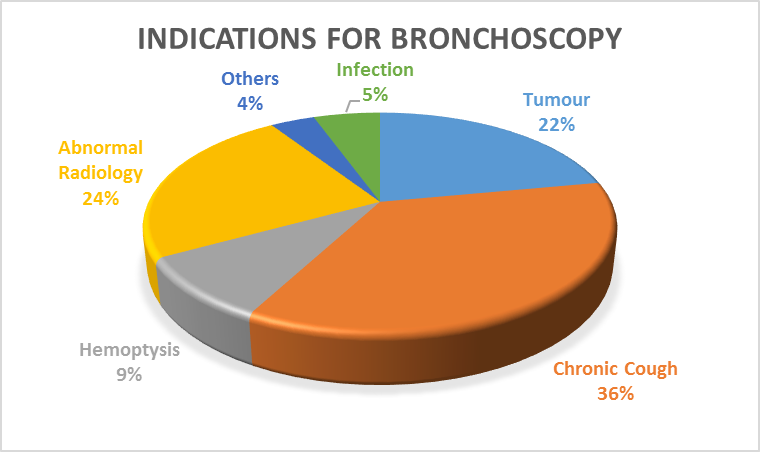 A total of 106 procedures were performed, 98% being for diagnostic purpose. To begin with, between two and four procedures were conducted per month, eventually increasing to 8-16 procedures per month. Sixty-six percent (2/3) of procedures were performed on outpatients. Mean age of patient that underwent Bronchoscopy was 66 + or – 8 years, 51 (48%) were males and 55 (52%) females. Thirty-seven (35%) of the diagnostic bronchoscopies were performed for functional airway assessment in chronic cough followed by 26 (24.8%) suspected malignancy and 23 (22%) abnormal radiology, while 2% of therapeutic indications were foreign body removal and clearing of airways in patient on ventilator. Mean rate of sedatives used were Midazolam 3.84 mg & Fentanyl 40.63 mcg. The average time taken for procedure being 15 + or – 1 minute with overall rate of complication 0.95%, which was minor bleeding (< 50 ml) during the procedure. In 2013, before commencement of service at St. Luke’s Hospital, 32 Patients were referred to tertiary unit for bronchoscopy procedures.15 patients were referred for EBUS as a staging procedure at a tertiary Unit, following diagnostic bronchoscopy for malignancies at St. Luke’s Hospital.

The increasing demand for bronchoscopy as a diagnostic and therapeutic tool as evidenced by our study supports the vital role of Bronchoscopy service availability in a peripheral Hospital2. In accordance with studies conducted earlier, Diagnostic Bronchoscopy were commonly indicated in cases of Suspected Malignancy and chronic cough. In compliance with European Respiratory society studies, it is found to be relatively a safe procedure performed in elderly population, equal number in both sexes using minimal dose of sedation with low rate of complications3. Most of the procedures were conducted on day care basis. This reduced on Hospital stay and bed occupancy4. Services offered have reduced the referrals to Tertiary Care Centre for Bronchoscopy procedures. The cost of a bronchoscopy procedure is €725 while on referral the cost mounted to € 1,588 per procedure, as it included the ambulance charge for transferring the patient. It not only saved time on referral but also expenses involved in patient Care, thereby providing a cost effective plus efficient new local service. It also reduced estimated length of time for patients awaiting Bronchoscopy procedure. Diagnostic Bronchoscopies for Malignancy at St. Luke’s Hospital is important for EBUS referrals as a staging procedure to a tertiary unit1. EBUS is a further advanced bronchoscopic technique that uses ultrasound to visualise structures within airway wall & lung. It has obviated the need for major invasive Mediastinoscopy and widely used for staging of Lung cancers5.