Grave Matters: Death and Dying in Dublin 1500 to the Present 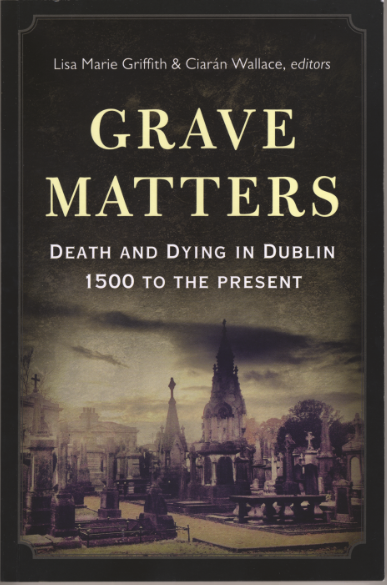 It is estimated that since the evolution of Homo sapiens there have been some 100 billion deaths. (A huge majority, despite the 1970s factoid, for the dead over the living.) ‘I did not know death had undone so many’ as Dante remarked, watching the hordes of the damned sweep past him.

Few of these would have received the lavish burials and memorials discussed in Grave Matters, but commemorating our dead is a peculiarly human thing to do. There are, so an Appendix to this book tells us, an astonishing 194 formal burial places (crypts, cemeteries and graveyards) in Dublin city and county. These range from the great Victorian institutions such as Glasnevin (from 1832) and Dean’ s Grange (from 1862) to tiny disused cemeteries such as the Cabbage Garden off Kevin Street, in use from 1666 to 1878. (Why cabbage? Two theories are suggested: one that it is a corruption of Capuchin, and another than Cromwellian soldiers once grew cabbages on the plot.)

Before the nineteenth century Dubliners, rich and poor, were buried in the graveyards of local churches. After the 16th century these were of course officially Church of Ireland. To avoid paying fees to the Rector, the poorer sort, especially if Catholic, resorted to unofficial sites such as ‘Bully’s Acre’ in Kilmainham which became favourite sites for the ‘resurrection men’. Over time the little parish graveyards filled up. And in the early 19th century, driven by a new Protestant militancy, objections (occasionally violently enforced) arose to the idea of Catholic prayer in ‘their’ cemeteries. Daniel O’Connell’s Catholic Association bought land for Catholic burials first at Goldenbridge and then at Glasnevin, thus inaugurating in Ireland the surprisingly profitable managed cemeteries. Fulltime funeral undertakers emerged to help the bereaved with transport and flowers and the paperwork. Cemeteries became, as they are now, places of quiet resort, replete with a kind of sober history.

Grave Matters explores the business of death and dying from multiple angles. In fact, because of its origins in papers delivered to a conference held in Glasnevin Cemetery Museum it has a somewhat scattered air. There are two epidemics enlarged on, puerperal fever in the 19th century Rotunda and the great flu outbreak of 1918-19; there is the burying of rich and poor in St James’ Church; official commemorations and funerals; and discussions of private funeral and commemorative practices, including a slightly queasy discussion of photography of the newly dead.

Readers of the Irish Medical Journal would perhaps have liked more discussion of medical/social issues relating to death, for instance the fear of being buried alive as a comment on medical practice, or the contest in the late 19th century between the clergy and the doctors as to which should have the final say at the deathbed, but no-one should be disappointed at the range and depth of the discussions offered.