There is no available Irish data on the rate of Ventriculo-peritoneal (VP) shunt insertion in infants with group B streptococcus (GBS) meningitis. We performed a retrospective case series of 40 infants with GBS meningitis over 6 years. Four (10%) infants required insertion of VP shunt for hydrocephalus. Those infants who required a VP shunt initially presented with seizures, lethargy and a low serum white cell count.

The number of infants with group B streptococcus (GBS) meningitis who develop hydrocephalus is reportedly small1.  In meningitis, purulent exudates from the meninges and ependymal surfaces of the ventricles occurs with associated peri-vascular inflammation and brain oedema. This pus accumulates and impedes both cerebrospinal fluid (CSF) flow and absorption of CSF.  There are no studies which report on the clinical characteristics of this cohort of infants with GBS meningitis who require Ventriculo-peritoneal (VP) shunt insertion.

A retrospective series was performed of all cases of neonatal GBS meningitis across three Neonatal centres and one paediatric centre in Dublin Ireland between 2008- 2013. A case control analysis compared the clinical, demographic and laboratory parameters of GBS meningitis cases and VP shunt insertion with those infants with GBS meningitis without VP shunt insertion. Fischers exact test was used to identify any significant difference. Meningitis was defined as CSF GBS culture or polymerase chain reaction test (PCR) positive. All VP shunt insertions took place in the National Centre for Paediatric Neurosurgery. 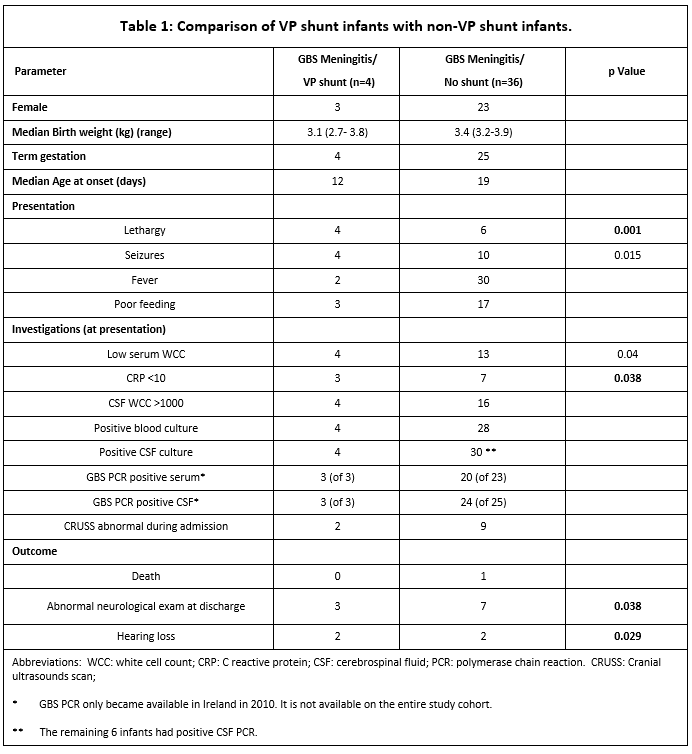 To our knowledge this is the first study in Ireland to report on VP shunt insertion (rate=10%) after GBS meningitis All cases requiring a shunt were diagnosed after 7 days of life and occurred in term infants. Seizures, lethargy and a low WCC at diagnosis were present in all shunted infants. In contrast, only one of the non shunted infants had all three features.  This infant passed away 6 days after presentation. Previous researchers have associated these three features with early severe sequelae3. 10 (27%) of the non shunted infants presented with seizures but were irritable in contrast to lethargic. 19% of the non shunted infants had an abnormal neurological exam at discharge which is a good predictor of outcome3. All of these infants subsequently had delayed development at follow up. There are a small number of case studies which report on hydrocephalus secondary to GBS meningitis. One case describes a 23 day old term infant with hydrocephalus at time of diagnosis of meningitis and had a VP shunt inserted 7 weeks later4. In another case report an ex 29 week old infant presented on day 53 with GBS meningitis and hydrocephalus. This infant had spontaneous resolution of hydrocephalus5. Wald et al. in a long term follow up study of GBS meningitis infants, document hydrocephalus in 8% of infants1. All these infants required VP shunt insertion.

Our study, although dealing with a small number of infants, documents for the first time the number and clinical characteristics of infants who required a VP shunt for hydrocephalus secondary to GBS meningitis. This information is helpful for counselling parents on outcome. It is necessary to follow-up these infants for at least 7 weeks post infection to detect hydrocephalus. Of note, our median follow up of 16 months may not allow detection of more subtle developmental issues which may manifest later. Recent molecular analysis of GBS isolates in Ireland has established serotype III (total of 10) as being the most prevalent among cases of neonatal GBS meningitis6. It might be interesting to further analyse these isolates in the context of outcome and shunt insertion. Trials of conjugate vaccines targeting these isolates have shown promising results.7 In conclusion, 10% of infants develop hydrocephalus post GBS meningitis. Seizures, low serum WCC and lethargy were present in all these infants at diagnosis.  Follow-up of these infants is important for the later detection of hydrocephalus and hearing loss.