Hidradenitis Suppurativa (HS) is characterized by chronic recurrent abscesses, nodules and draining sinus tracts with scar formation. Cutaneous Crohn’s Disease (CD) may also present similarly. We wished to identify and describe an Irish cohort with combined HS and CD, with a view to a better recognition of clinical manifestations and understanding of the pathophysiology underlying these two overlapping conditions. Cases were identified using the HIPE Code at Tallaght Hospital from 1990-2014 and retrospective review was performed. Seven patients with both HS and CD were identified, 5(71%) female. The median age of diagnosis with both conditions was 37 years. In all cases, CD had preceded the diagnosis of HS. All patients smoked. Six had an increased BMI and 43% had additional autoimmune conditions. All patients required treatment with a TNF-alpha inhibitor for HS with 5 of 6 subjects having reduced frequency of flare ups and clinically less active HS on follow up.

Introduction
Hidradenitis Suppurativa (HS) is a chronic inflammatory skin condition characterized by recurrent, painful abscesses, nodules and draining sinus tracts with bands of scar formation. The primary sites of involvement are the intertriginous skin areas of the axillary, groin, perianal, perineal, and inframammary regions (Figure 1).The diagnosis remains a clinical one and is based on the criteria adopted by the international symposium of the HS Foundation in March 2009 with the Hurley’s staging system often being used in clinical practice to assess severity and guide treatment (Table 1). The pathogenesis of HS is not entirely understood and is probably multifactorial. The primary mechanism in the disease is thought to be hyperkeratinisation of the pilosebaceous infundibulum resulting in occlusion with subsequent inflammation from spilling of the contents of the ruptured follicle including keratin and bacteria into the dermis2. About 40% of patients with HS have reported a family history of this similar condition, suggesting a genetic susceptibility3. Smoking has also been strongly linked with HS. This is proposed to be due to the stimulatory effects of nicotine on follicular occlusion, TNF-alpha production by keratinocytes, neutrophil chemotaxis, and Th17 cells stimulation4,5. Studies also suggest that elevated BMI is associated with HS prevalence and severity. Revus JE et al showed an increase in the risk of HS by 1.12 for each unit increase in BMI  256. Hormonal influences, in particular sex hormones, mechanical stresses on the skin, and dysfunction of the immune system with an inappropriate response to commensal bacterial skin flora have also been cited as pathogenic factors in the development or exacerbation of HS7.

At present, definitive treatment guidelines for the management of HS are lacking due to the paucity of evidence based data and the unpredictable nature of the response to treatment. Therefore, there are multiple treatment options in use for this condition including topical or oral antibiotics, corticosteroids, retinoids, hormonal therapy, biologics and surgical intervention including incisional and drainage or laser ablation8. A multidisciplinary approach using both medical and surgical treatment modalities may be required for successful treatment of HS depending on type of lesions, Hurley’s stage and frequency of flares. Crohn’s disease (CD) is a disorder of uncertain aetiology characterized by transmural inflammation of the gastrointestinal tract and may involve the entire tract from the mouth to the perianal area. Approximately 44% of patients with CD have skin involvement or cutaneous CD9,10,11. These cutaneous manifestations of CD may be further subdivided into: (A) CD specific lesions involving the skin which are histopathologically similar to lesions in the gastrointestinal tract with granulomatous inflammation11. These may manifest as skin tags, fissures and abscesses around the perineal and perianal region as well as oral CD and metastatic CD. (B) Reactive lesions such as erythema nodosum and pyoderma gangrenosum which are examples of non-granulomatous skins disorders occurring as a reaction to intestinal disease. (C) Other associated dermatological conditions that can arise without a well-defined mechanism including vitiligo, palmoplantar pustulosis and HS11. The occurrence and similarity with cutaneous CD has made the recognition and diagnosis of HS in patients with CD a difficult one. In particular differentiating HS lesions from metastatic CD involving intertriginous skin and the genital area may be particularly troublesome. There is evolving evidence that HS and Crohn disease share histologic features with granulomatous infiltration and fistula formation and that both can coexist12. There are also several other similarities between HS and CD. Both conditions are chronic diseases of the epithelia which are inhabited by commensal flora and both have demonstrated a clinical response to anti-TNF α therapy. They share a number of predisposing factors including genetic predisposition and smoking association12. We wished to identify and describe an Irish cohort with combined HS and CD, with a view to a better recognition of clinical characteristics and understanding of the pathophysiology underlying these two overlapping conditions.

Methods
Patients with HS and CD were identified using the HIPE (Hospital In-patient Enquiry) Code at Tallaght Hospital from 1990-2014. A retrospective review was performed on each case with pertinent clinical information obtained from medical notes including age, gender, time of diagnosis of HS and CD, clinical presentation of HS and CD, treatment for both conditions and clinical progress.

Results
In total, 7 patients were identified with a dual diagnosis of HS and CD. The majority, 5 of 7 were female and 5 of 7 were young, with a mean age of 38.1 years (range 31-50 years). Most of the patients, 4 of 7 were at Hurley’s Stage 2 with two patients at Hurley’s Stage 3 and one patient had Hurley’s Stage 1 at diagnosis. All 7 subjects had a history of smoking, 6 current and one ex-smoker. One patient was clinically obese BMI≥30Kg/M2 and 5 were overweight BMI≥25Kg/M2. Only one patient gave a family history of either condition. Of note, two patients had a histological diagnosis of HS with the remaining 5 being diagnosed clinically with the presence of characteristic features of HS on examination. HS affected the axillary region only in three patients, the groin only in two patient, axilla and groin in one, and axilla, groin and vulval region in one subject. The median age of diagnosis with both HS and CD was 31 years. In all of our patients, CD had preceded the diagnosis of HS, by a median interval of 48 months. One patient had both a reactive and metastatic skin manifestation of CD in addition to HS namely pyoderma gangrenosum and vulval CD. Of note, 43% of patients had additional autoimmune conditions including Psoriasis (n=2) and Ankylosing Spondylitis (n=1). In all, 6 patients required treatment with a TNF-α inhibitor for HS which proved to be effective in 5 out of 6 of the patients (83%). Only one required combined surgical and medical management of their HS. (Table 2) 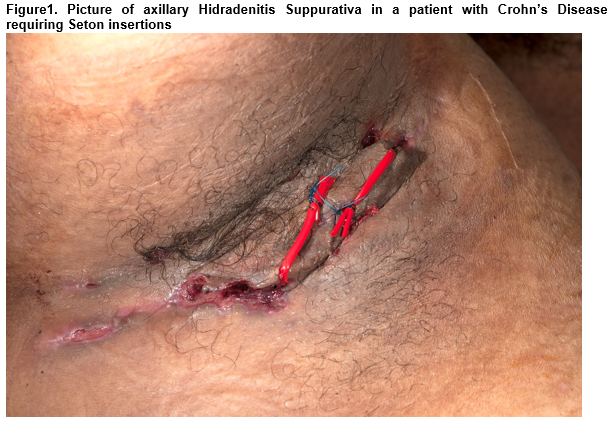 Discussion:
We describe 7 cases with a dual diagnosis of HS and CD. There were a few common characteristics in all the 7 cases worth noting. The majority were young, female and smokers. CD preceded the diagnosis in all subjects. The majority required treatment with anti-TNF-α therapy to successfully control their HS. Of interest, despite obesity being associated with HS in previous literature, only one patient (14%) in this cohort had a BMI of ≥ 30Kg/M2, however a further 5 (71%) were overweight BMI ≥25Kg/M2, confirming an association with increased weight. In addition despite a reported genetic predisposition, only one of our entire cohort had either a family history of HS or CD, and this one individual had a first degree relative also with both HS and CD. In our cohort there was an association with other auto-immune conditions with three of 7 subjects affected. This is not surprising and fits with the altered immune based hypothesis underlying both conditions and highlighted in recent studies13,14. Although activation of the innate and adaptive immune systems is an expected response to the release of antigens and other proinflammatory stimuli from a ruptured follicular duct, the chronic inflammatory nature of HS combined with the frequent absence of pathogenic bacteria is suspect for the role of aberrant immunity. This concept of a dysregulated immune system has also been hypothesized in CD with the involvement of TNF-alpha and other cytokines15. A recent study of cytokine and leukocyte profiling in skin lesions by H.H.van der Zee et al demonstrated for the first time the presence of TNF-alpha , IL-β , IL-10 and IL-17 in both lesional and peri-lesional HS16. In another study, Schlapbach et al, mRNA expression of IL-23p19 and IL-12p70 was elevated in HS skin, IL-23 to a greater degree than IL-1215. The data suggests a broader overlap in cytokine profile than previously thought and includes the cytokines IL-1β, IL-10, IL-17, IL-23 and IL-12 as well as the better documented TNF-alpha. These findings may be a reflection of an active IL-23/Th17 pathway in HS, which is also involved in other various auto inflammatory diseases, including psoriasis and CD17. Supporting the theory for a common immune pathway in both conditions is the efficacy of anti-TNFα biologics for HS in a number of cases18,19,20.

From this cohort of patients, two patients required biopsies of lesions as the distinction between cutaneous CD and HS was challenging clinically. In one patient requiring skin biopsies for diagnosis, an overlap of both of HS and cutaneous CD was present with the histology showing few granulomas associated with hair follicles, as well as deep perivascular occasional granulomas suggesting cutaneous CD is also present.

Our data and other case series to date enhance awareness of the clinical characteristics and potential overlap of HS and CD. This should prompt physicians to investigate patients with a diagnosis of HS for CD if they develop gastroinstestinal symptoms and also recognise HS as a separate and possible diagnosis in patients with CD who develop skin lesions. It is particularly important for clinicians to be aware of the potential coexistence of both cutaneous CD lesions and HS lesions as occurred in one of our subjects (vulval metastatic CD, reactive pyoderma gangrenosum and HS). They may have similar clinical and pathological findings making it challenging for clinicians to make the distinction. While granulomatous lesions are common to both, follicular involvement with keratin plugging and ruptured follicles can help to distinguish HS histologically from cutaneous CD, as can the location of the granulomas often being discrete epithelioid granulomas in the dermis away from the site of active inflammation being indicative of CD21,22. Although the majority can be distinguished by experienced dermatologists clinically and are not routinely biopsied.

The distinction between the two conditions is important to instigate appropriate treatment for an individual while an anti-TNFα is useful for both treatments, the use of topical and/or systemic antibiotics is essential for HS. In addition, it is important for clinicians to be aware of the risk of transformation of HS to squamous cell carcinoma which has a reported incidence of 3.2%23,24.

In summary, our case series suggest that dual HS and CD affects young, female, overweight smokers and is frequently associated with other auto inflammatory conditions. Although most patients with HS can be diagnosed clinically, some patients with overlapping CD may need skin biopsies to determine if lesions present are related to HS or cutaneous CD as clinically these may appear alike. Anti-TNFα therapy appears to offer a useful therapy in combined resistant cases. However as a significant proportion will still relapse, a better understanding of the underlying pathophysiology is essential to enable new therapeutic agents to be sought.

Conflict of Interest:
There is no conflict of interest to be declared by any of the authors of this paper in terms of any financial interests or connections, pertinent commercial or other sources of funding or direct academic competition. All authors have contributed equally. No specific funding has been received for the completion of the above work.