I Still Haven’t Found What I’m Looking For….. Bono, Google and Glaucoma Awareness.

Introduction
In October 2014 Bono, the lead singer with U2, revealed publicly, for the first time, that he has glaucoma. Celebrity diagnosis with a disease can lead to increased awareness of an illness amongst the general population1,2.  Similarly it has been shown that celebrity diagnosis with a disease can lead to increased health seeking behaviour related to that disease1,2. Glaucoma affects 1-2% of the population over 40 years3.  Asymptomatic in its early stages it is one of the leading causes of preventable blindness3. Despite this, up to 50% of adults with glaucoma are undiagnosed4,5. It has also been shown that there is a low level of awareness of glaucoma in glaucoma patients prior to their diagnosis6.  Increasing public awareness of glaucoma may be important in reducing related preventable blindness. Google Trends is a public web facility of Google Incorporated. It can determine the number of searches that have been conducted for a particular word or phrase of interest and compare this with the total number of Google searches performed over a given time period. Google Trends are available only in relative, and not absolute, terms. The results of the search engine query are scaled so that 100 equates to peak search volume. Thus, a value of 25 would suggest that the search intensity at that period was 25% of the highest intensity of all Google queries. ‘Scaling’ in this way allows researchers to compare changes in the frequency of searches over time.

Methods
Google Trends was used to examine Google Search activity for the term ‘glaucoma’ between 2009 and 2015 in both Ireland and the United Kingdom (UK). Particular attention was paid to the month of March as Glaucoma awareness week falls here and the month that Bono revealed his diagnosis (October 2014). Trend analyses were performed using Microsoft Excel Version 14.3.5. 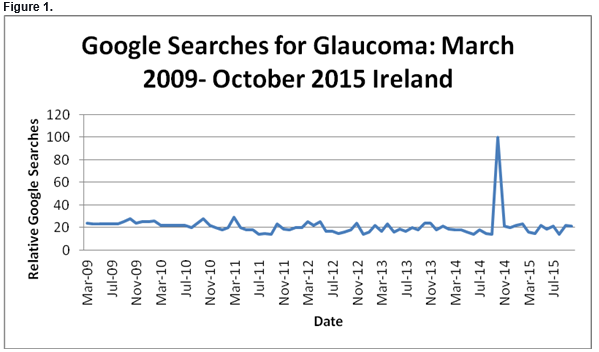 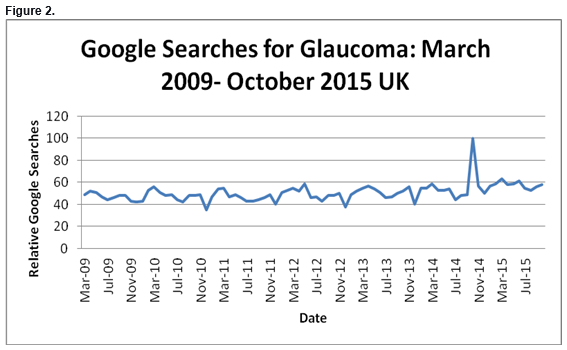 Discussion
A poll in the United States found that half of American adults have used the web to find health information7. A similar study in the European Union reported that 52.2% of Europeans had done the same8.  The Internet thus provides a unique opportunity for health promotion and disease prevention. Monitoring the use of the Internet for health related searches is a novel tool for the observation of health information seeking behaviour. Google Trends is an accessible tool that allows users to interact quickly and easily with internet search data. The Institute of Medicine in the United States has suggested that the use of Internet search data in health care research may ‘‘complement and extend the data acquisition foundations that presently exist’’9. The use of Google Trends in research is increasing and this may be particular to healthcare research.  It has been used to assess interest in health related topics, to investigate the spread of communicable diseases, and to assess health related behavioural change10.  In many cases Google Trends has been shown to correlate with external, referenced, data sources10.  Google Trends patterns have been shown to correlate with the incidence of H1N1 outbreaks and new diagnoses of Human Immunodeficiency Virus (HIV) infection for example11,12.

Celebrity disclosure of their illnesses can increase public interest in that specific disease. In 1991, the American basketball player Earvin "Magic" Johnson Jr. announced that he had contracted HIV.  This revelation altered HIV and acquired immunodeficiency disease (AIDS) related knowledge amongst Americans2. In some cases the revelation that a celebrity has a disease can change the public’s health seeking behaviours. Celebrity cancer diagnoses have promoted both attempts at primary prevention and the uptake of cancer screening programs. After Brazilian President Lula da Silva attributed his development of laryngeal cancer to smoking, on-line smoking cessation queries eclipsed those of all other times including Brazil’s national No Smoking Day, New Year’s Day and World No Tobacco Day13. British television star Jade Goody’s cervical cancer diagnosis produced a 43% increase in cervical smear appointments1. Australian singer Kylie Minogue’s breast cancer diagnosis stimulated a 40% increase in attendance at mammography appointments14. American President Ronald Regan’s colon cancer surgery was followed by a 400% increase in colon cancer inquiries to a national telephone hotline15.

Here we have demonstrated that the revelation by a celebrity that he has glaucoma raised public interest in the disease in both Ireland and the United Kingdom.  This may be the first step in increasing levels of both on and off-line health seeking behaviour.  It is unclear, as yet, if this elevated interest in glaucoma led to an increase in glaucoma related health seeking behaviour. Web data is collected by Google in an efficient and cost effective manner. There are however several limitations to using it in health research.  Only people with Internet access and only those who use Google can be studied.  While Google is the most frequently used search engine, many others exist. The means by which Google creates its search related data in Google Trends and the algorithms it employs to examine this are not clearly elaborated by the system. Finally, Google search trends are anonymous.  The ability to analyse sub-populations in any study in which this tool is employed is thus very limited10. Interestingly, current approaches to glaucoma related health promotion in both Ireland and the UK have failed to yield an increase in on-line Google Search activity.  While this is not the only measure of public awareness it does suggest that current public information campaigns are falling short.

Public health specialists have struggled to find ways to increase participation in preventative health programs. Health issues can receive substantial publicity when a celebrity becomes affected, undergoes a medical procedure or announces a health related lifestyle change16. It appears that capitalising on the interest generated by celebrity illness can increase coverage of health topics to levels that would ordinarily require huge media campaign budgets17. Celebrity illnesses are as inevitable as the massive media coverage that they can bring. Health advocates could develop anticipatory strategies for responding to such coverage of celebrity diagnoses with disease. As an example, health agencies could develop news management strategies whereby the relevant celebrity management agencies would be rapidly assisted with responses to the inevitable ‘frequently asked questions’ that follow celebrity statements regarding disease14. While celebrity spokespersons have remarkable potential to transmit important medical information a notable concern is the possibility for well meaning public figures to use their influence to promote unproven or even dangerous behaviours18.  Celebrity spokespersons could be advised to deliver carefully targeted evidence based recommendations that will ultimately improve public health19.

Conflict of Interests:
None of the authors have any competing interests to declare.