Improving time to surgery for hip fracture patients. Impact of the introduction of an emergency theatre

Hip fractures are a major cause of morbidity and mortality1. Surgery performed on the day of or after admission is associated with improved outcome2,3. An audit cycle was performed examining time to surgery for hip fracture patients. Our initial audit identified lack of theatre space as one factor delaying surgery. A dedicated daytime emergency theatre was subsequently opened and a re-audit was performed to assess its impact on time to surgery. Following the opening of the theatre, the proportion of patients with a delay to hip fracture surgery greater than 36 hours was reduced from 49% to 26% with lack of theatre space accounting for 23% (3 of 13) of delayed cases versus 28.6% (9 of 32) previously. 44% of hip fracture surgeries were performed in the emergency theatre during daytime hours, whilst in-hospital mortality rose from 4.6% to 6%. We conclude that access to an emergency theatre during daytime hours reduced inappropriate delays to hip fracture surgery.

Hip fractures pose a major health risk. In Ireland 3,000 people are hospitalised with hip fractures every year4. It is primarily a disease of the elderly with mean age of fractures of 84 years in women and 83 years in men. Patients often have multiple co-morbidities and mortality is high with an in-hospital mortality rate of 4.6%5. Hip fracture care is complex and multidisciplinary. It should adhere to evidence based guidelines with regular audit and feedback to ensure quality service. Amongst these guidelines the need for an expedited route to surgery is highlighted, which results in better pain control, earlier mobilisation, improved morbidity and likely reduced mortality2,3. It is estimated in the UK that following the introduction of the National Hip Fracture Database (NHFD) rates of early surgery increased with approximately 1000 fewer people dying per year within 30 days of admission following hip fracture5. This would equate to 50 less deaths in Ireland from hip fractures each year4.

Several reasons account for inappropriate delay to surgery including lack of available theatre space and delay for inappropriate medical reasons. Access to a dedicated emergency theatre during daytime hours may reduce delays in certain hospitals. An audit carried out in our institution in 2013 showed that in 49.2% of hip fracture cases examined there was a delay >36 hours from hospital admission to surgery. In 39.3% of these cases the reasons for delay would be considered unacceptable by the Association of Anaesthetists of Great Britain and Ireland (AAGBI)7 with lack of theatre space cited in 28% of delayed cases. Our primary aim was to establish the effect of introducing a daytime emergency theatre on time from admission to surgery for hip fractures.

Our hospital is a large tertiary referral centre with a busy mixed speciality caseload including the National Spinal Injuries Unit and the National Heart and Lung Transplantation Service. There is an active orthopaedic and trauma service with only one dedicated orthopaedic theatre undertaking a mixture of elective and emergency cases. An additional theatre was opened in July 2014 during daytime hours specifically to manage emergency cases, of which trauma makes up a large part.

Data was collected prospectively on the perioperative management of all patients undergoing hip fracture surgery from 01/12/2014 until 01/05/2015. The anaesthetist at the time of surgery recorded length of time to surgery following admission and any reasons for delay. Time of admission was taken as time entering the emergency department, while time of surgery was taken as time arriving in the anaesthetic room. Patient co-morbidities, ASA (American Society of Anaesthesiologists) status, pre-operative medications and anaesthetic technique were also recorded. A member of the audit team later collected data on length of stay and postoperative complications. Patients who sustained periprosthetic fractures and fractures while in hospital were excluded. Similar to our initial audit, the Irish Hip Fracture Database (IHFD) and the NHFD, patients less than 60 years of age were excluded from the study. In total 50 patients were included in the study. Results were compared to the IHFD 2014 report4, the UK NHFD 20158 and the Anaesthetic Sprint Audit of Practice (ASAP) 2014 report9, which uses NHFD data to profile perioperative care of hip fractures against AAGBI guidelines7.

The mean age of patients in our re-audit was 81 years. This was similar to our initial audit where the mean age was 80 years. A larger proportion of our patients were over 90 years old compared to our previous study (20% versus 13.8%). Co-morbidities were common with 1 or more of the documented illnesses present in 82% of cases. Given the high number of co-morbidities it is not surprising that 74% of patients included had an ASA grade of 3 or more. This was greater than our initial audit (63.1%), the 2014 ASAP figures (67%)9 and the IHFD 2014 figures (53%)4. The majority of patients (80%) were reviewed by an anaesthetist prior to arriving in theatre, which is reduced compared to 2013 figures (87%). More patients, 8% versus 1.5%, were reviewed in the emergency department, which was one of the recommendations of our initial audit, but also may reflect a longer wait to ward bed allocation due to bed pressures at our institution. 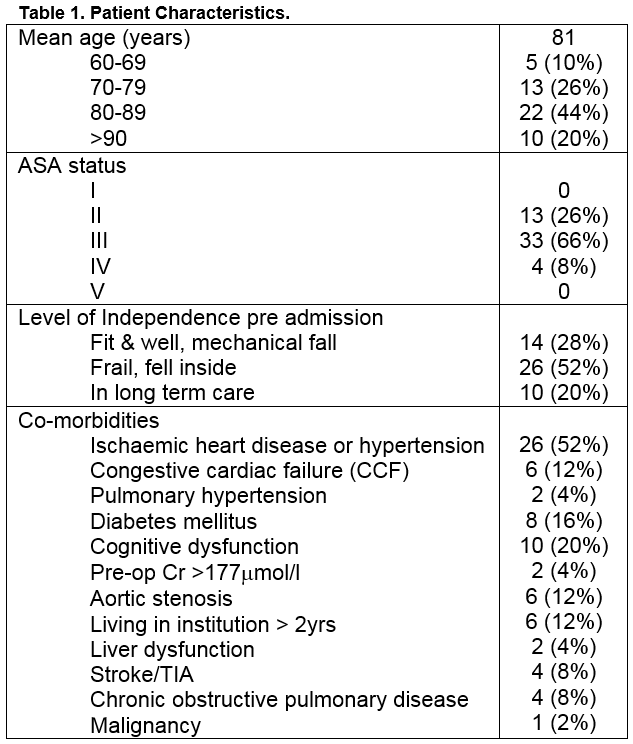 Data around the surgical procedure was also collected. All procedures were under the supervision of an anaesthetic consultant. 44% of cases were performed in the dedicated emergency theatre, with the remainder performed in the orthopaedic theatre. Bipolar hemiarthroplasty procedures accounted for the majority of surgical approaches (48%) with dynamic hip screws (24%) and gamma nails (28%) accounting for the remaining. No patients underwent total hip arthroplasty for hip fractures. Cement was used in 22 of 24 patients undergoing a bipolar hemiarthroplasty; the remaining 2 received an uncemented Austin Moore prosthesis.

Central to this audit was determining the effect of introduction of an emergency theatre during daytime hours on time to hip fracture surgery. This audit shows a reduction from 49.2% of patients delayed >36hours from admission to surgery in 2013 to 26% in 2015.  The IHFD reports 57% of patients undergoing surgery within 36 hours4 while the UK NHFD figures reports 72.1% of cases are performed on the day of or after admission8.

On review of the 13 cases that were delayed >36 hours, 3 were deemed to be due to a lack of theatre space accounting for 23% of delayed cases. This is an improvement from 2013 figures where 28.6% of cases (9 of 32) were delayed due to lack of theatre space, but this difference was not statistically significant (p = 1.0; OR 0.7667 [95% CI 0.1705-3.447]). 44% of cases were performed in the dedicated emergency theatre, with the remainder performed in the orthopaedic theatre. Other unacceptable reasons for delay included awaiting echocardiogram (1 patient) and anti-platelet therapy (1 patient). Acceptable reasons for a delay beyond 36 hours included a patient on warfarin with a raised international normalized ratio (INR) > 2 (1 patient), rivoroxaban therapy (1 patient), awaiting Computed Tomography (CT) hip (1 patient) and delay for medical optimisation (4 patients). The cases requiring medical optimisation included a patient with sepsis secondary to a lower respiratory tract infection (LRTI), a case requiring haematology consult and two patients with anaemia necessitating red cell transfusions prior to theatre.

Median length of stay was 12 days, when patients who died were excluded. This is similar to our 2013 figure, the IHFD figure (12.5 days)4 and less than the NHFD 2015 figure (15.3 days)8. There were 3 deaths giving an in-hospital mortality of 6%. One death occurred in the post anaesthetic care unit (PACU) and was felt likely due to cement reaction. Another patient died 15 days postoperatively suffering both myocardial infarction and LRTI. A further patient had metastatic disease and died 36 days postoperatively following LRTI. In-hospital mortality from our previous study was 4.6% while NHFD 30 day mortality figures from 2014 report stands at 7.5%10. Postoperative complications were common, occurring in 48% of patients. These are outlined in table 4. Eight patients required admission to our high dependency unit (HDU) or intensive care unit (ICU) post-operatively. There were no recorded wound infections, decubitus ulcers or deep venous thombi/pulmonary emboli (DVT/PEs).

Similar to both IHFD and NHFD figures our study shows that patients who suffer hip fracture are elderly, have multiple co-morbidities and are at high risk of death and serious complications following admission. Delaying hip fracture surgery following admission is associated with increased length of stay and greater morbidity and mortality for patients. Indeed delaying surgery beyond 48hours of admission may increase the odds of 30 day mortality by 41%11.  Various guidelines advocate early surgery in these patients. The IHFD, which is governed by the National Office of Clinical Audit (NOCA) collects data on hip fractures and monitors care against six standards as published in the ‘Blue Book’, formed from the collaboration of the British Geriatric Society (BGS) and the British Orthopaedic Association (BOA) in 2007. According to ‘Blue Book’ standards medically fit patients should have surgery within 48 hours of admission and during normal working hours12. A similar timeframe is proposed by the AAGBI in their guidelines on ‘Management of Proximal Femoral Fractures 2011’, which forms a specific guide to anaesthetists7. Quality standards however issued by the National Institute of Health and Care Excellence (NICE) recommend surgery on the day or day after admission13. These guidelines form standards used by the NHFD in the UK, which is the largest on-going audit of hip fracture management in the world8.

The logistics involved in a quick route to surgery include fast track admission pathways, dedicated trauma lists, pre-operative assessment and early optimization of medical problems7. Delay to hip fracture surgery due to lack of available theatre space is not unique to our institution14,15. However, it appears to be a greater problem in our hospital than nationally as the IHFD report that 12% of delayed cases > 48 hours are due to lack of theatre space4. We have show that introduction of an emergency theatre during daytime hours can reduce operative delays due to inappropriate reasons in this patient group. A reduction from 49.2% of patients delayed >36hours from admission to surgery in 2013 to 26% in 2015 was recorded with lack of theatre space being the primary reason for delay in 3 of 13 cases delayed > 36hours (23%) versus 9 of 32 cases (28.6%) previously. Our figures now compare more favourably to the UK NHFD where 72.1% of cases are performed on the day of or day after admission8, and IHFD figures where 72% are performed within 48 hours of admission4. Further improvements may be possible with more efficient use of the theatre during daytime hours.

Inappropriate reasons for delay as per the AAGBI6 also include awaiting echocardiogram and antiplatelet therapy, which accounted for 2 cases in our institution. Cases requiring medical optimisation thereby delaying surgery to allow physiological stabilisation may not improve overall outcome, but may prevent on-table death. It is recommended that the benefits of expedited surgery be balanced against the risks of certain untreated conditions such as atrial fibrillation7. Delay for patients awaiting medical review, investigation or stabilisation accounts for the greatest number of delays nationally at 54% of cases delayed greater than 48 hours4.

As regards perioperative care at our institution, a greater proportion of our patients receive intrathecal anaesthesia involving administration of intrathecal fentanyl than ASAP figures9. A considerable number of patients are still receiving general anaesthesia (42%), similar to national figures (41%) This may be due to specific consultant preferences and the mode of anaesthesia may well be less important than the manner in which it is delivered16. It is a concern that a substantial number of patients who may be suitable for peripheral nerve blocks are not being offered them (only 36% of patients received a nerve block). We plan to communicate this finding and aim to identify the barriers to the performance of peripheral nerve blocks in this patient group. The increase in mortality noted in our re-audit (from 4.6% to 6%) is small and may be explained by the greater number of ASA grade 3 patients in the second patient group. We conclude that access to a staffed daytime emergency theatre has succeeded in reducing some of the inappropriate delay to hip fracture surgery experienced at our institution.

There is no conflict of interest to declare

1. The National Institute of Health and Care Excellence. NICE Clinical Guideline 124 – The management of hip fracture in adults. Issued June 2011. Available from; http://guidance.nice.org.uk/CG124

10. The National Hip Fracture Database (NHFD). An analysis of 30-day mortality in 2014. Available from http://www.nhfd.co.uk/