We report the case of a 42-year old previously healthy gentleman with a history of chest pain on exertion and fatigue, having recently commenced an exercise program. He had no cardiac risk factors. Physical examination and initial laboratory tests as well as baseline ECG were normal.  An exercise treadmill test was performed, and the patient exercised for 10 minutes on a standard Bruce protocol, achieving 11.7 METS and reaching 93% age predicted maximal heart rate.  During the exercise stress test, he developed 2 mm of ST depressions in leads II, III, aVF and V3-V6 without chest pain, which began at 5:42 minutes and resolved 0:35 minutes into recovery. 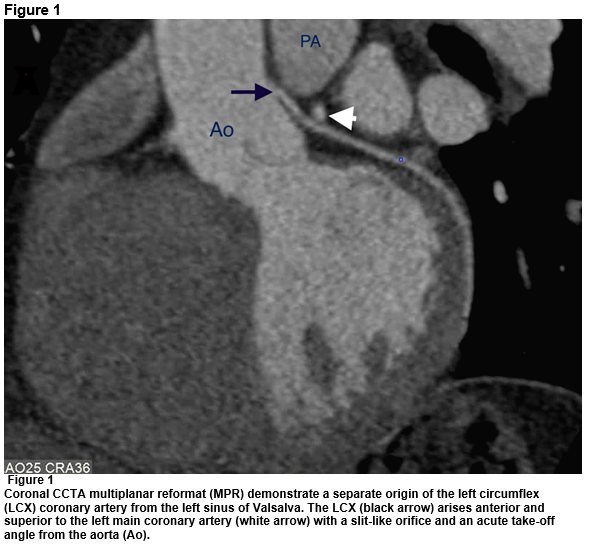 A cardiac CT angiogram (CCTA) was performed to assess for coronary artery disease. This was performed on a 320-detector CT (Toshiba Aquillion One Vision, Japan) with a prospective ECG-gated acquisition. Images were acquired in a single heartbeat with 60cc of IV contrast (Iopamidol 370, Bracco Imaging, New Jersey, USA).

CCTA shows a separate origin of the left circumflex (LCX) coronary artery from the left sinus of Valsalva. It arises anterior and superior to the left main coronary artery with a slit-like orifice and an acute take-off angle from the aorta. It then has a short course between the pulmonary artery anteriorly and the aorta posteriorly (Figures 1 & 2). There was no coronary artery plaque or stenosis. Given the imaging features, the patient was referred to cardiac surgery for possible intervention. 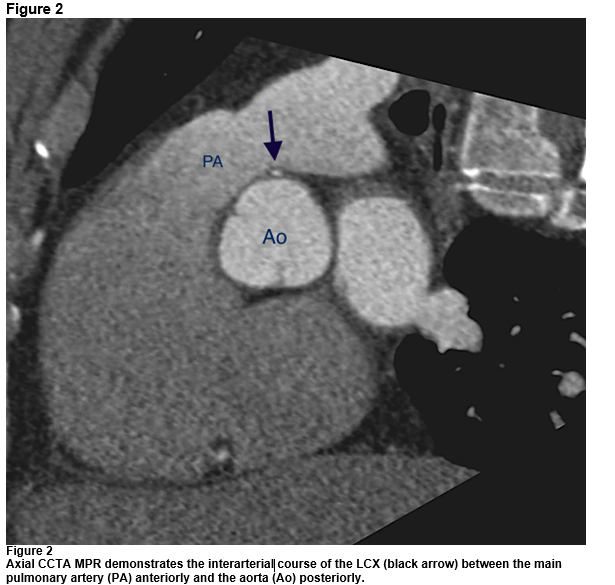 There are no reported cases of a symptomatic left circumflex anomaly; the most commonly described LCX anomaly is an aberrant origin from the right coronary sinus with a retro-aortic course, a ‘benign’ anomaly. One series of over 7,000 patients found an anomalous coronary arterial origin in 0.8% of patients. Anomalous origin of the LCX was the most common anomaly, accounting for 40% of cases, with none demonstrating any malignant features2.

In our case, we describe an anomalous origin of the LCX with a separate ostium from the left coronary sinus. It has a slit-like origin, with an acute take-off angle from the aorta and an interarterial course, features associated with ischemia. Cardiac catheterization is no longer the sole imaging modality used to assess coronary artery anomalies; CT should be performed to complement catheterization for further anatomic evaluation4. CT allows for a three dimensional assessment of coronary artery lumen morphology, which can help in risk stratification4,5.

The treatment of anomalous coronary artery origins with an interarterial course remains a topic of great debate. Most clinicians agree, however, that evidence of ischemia is an indication for surgical intervention6.

The aiuthors declare no conflicts of interest.