Investigating the Perceived Benefits, Barriers and Beliefs towards Physical Activity in Pregnancy among Women with Gestational Diabetes Mellitus

Gestational Diabetes Mellitus (GDM) is a growing concern and poses serious health risks to both mother and child1. The current study explores the psychological determinants of exercise behaviour in a sample of pregnant women with GDM. A cross-sectional survey design was employed to examine exercise behaviour, illness perceptions, perceived barriers and benefits, exercise beliefs, and exercise self-efficacy using validated questionnaires. A sample of 46 pregnant women was recruited from University College Hospital Galway, Letterkenny General Hospital, Cork University Hospital and Mayo General Hospital in Castlebar. Participant’s varied; age (22-44 years), body mass index (19-41). High mean scores for Personal Control (24.5) and Treatment Control (30.2) subscales indicated strongly held positive beliefs in relation to controllability of the illness. Total MET-min/week score was not related to any psychological variables. Analysis of the IPQ-R data revealed ‘diet’ (n=37, 80.4%) as the most referred to cause of diabetes. Exercise belief data identified “managing weight gain” (n= 21, 45.7%), and “losing baby weight” (n= 31, 67.4%) as the most frequent beliefs for engaging in physical activity during pregnancy and post pregnancy. Further research on the psychological determinants of physical activity behaviour among this population group is needed in order to create successful intervention strategies.

Introduction
Gestational Diabetes Mellitus (GDM) is increasing in prevalence, with rising levels of maternal overweight and obesity a major contributor2. GDM increases the likelihood of caesarean delivery, macrosomia, neonatal abnormalities and birth trauma3. The future health of the mother and baby are also at an increased risk of being compromised following diabetes in pregnancy, with the risk of developing type-2 diabetes seven times greater than in normal glycemic pregnancies2. Children born to women with gestational diabetes are also at an increased risk of developing respiratory distress syndrome, jaundice, childhood obesity and metabolic syndrome when compared with children of non-diabetic women4. Research has found that being physically active prior to becoming pregnant as well as during pregnancy and postpartum, has the potential to reduce the risk of progression from gestational diabetes to type 2-diabetes5.

In the past, it has been speculated that exercise during pregnancy could lead to adverse events such as overheating, impaired delivery of oxygen and nutrients to the foetus and premature labour6. However, evidence to support these assertions is lacking and research indicates that exercise in pregnancy is in fact safe7. Physical activity reduces the risk of pregnancy complications such as preeclampsia, preterm delivery and gestational diabetes along with reducing discomfort, increasing fitness for labour and increasing the likelihood of vaginal delivery8,9. The American College of Obstetricians and Gynaecologists (ACOG) recommend 30 minutes of moderate intensity physical activity for pregnant women without obstetrical complications10. However, despite this information encouraging an active lifestyle during pregnancy remains a challenge. Regarding physical activity levels, the United States reported that only 15.8% of women engaged in exercise during pregnancy at the recommended level, while 34% of pregnant women had not engaged in any moderate or vigorous activity11. Similarly, low levels of physical activity (21.5%) were found in an Irish cohort of pregnant women12 and in a sample of Danish pregnant women, moderate-to-heavy activities decreased over the three trimesters of pregnancy13. Furthermore the results from a study conducted in Brazil showed alarmingly low rates of physical activity, with only 4.7% of pregnant women being active14.

Pregnancy is a time when health behaviours such as physical activity can be challenged in order to improve not only the mother’s health but the health of the baby15. The likelihood of someone making a substantial behaviour change is dependent on a host of factors such as; beliefs, values, perceived barriers, and exercise self-efficacy16. The development and future success of exercise interventions among pregnant women with GDM hinges on having an accurate insight into these psychological determinants. There is a need to understand the facilitators and barriers to exercise in pregnancy and to understand the relationships between psychological predictors in order to develop effective interventions and strategies1,17. It is evident that prior to promoting exercise to this particular group of women, the specific exercise determinants need to be examined. Therefore the aim of this study is to explore the psychological determinants of exercise behaviour in pregnancy in women with GDM.

Method
A cross-sectional study was conducted with a sample of pregnant women with GDM (N=46) in June 2014. Ethical approval was obtained from the National University of Ireland, Galway Research Ethics Committee and the University College Hospital Galway ethics committee. Participants were pregnant women diagnosed with GDM who were attending the diabetes clinics in four participating hospitals. Exclusion criteria included not having sufficient level of English language to complete the questionnaire, and the presence of any co-morbidity or pre-existing condition other than diabetes. Participants were recruited from the diabetes clinics and maternity outpatients of four large hospitals. Women were approached and provided with information detailing the study aims. Those willing to participate were given the choice of completing the survey on site, or were given a stamped addressed envelope to post the completed survey back. Participation was voluntary, and women were free to withdraw at any point. Informed consent was obtained prior to the completion of the survey. Women attending the clinic on the days when the researcher was not present were sent the survey via post along with a stamped addressed envelope for its return. A total of 101 surveys were distributed, based on previous research in the area6,16. Basic demographic information was obtained including ethnicity, relationship status (single/married); education level (secondary/tertiary); employment status (employed/unemployed); parity (first pregnancy/two or more) height; weight; smoking (yes/no) and drinking behaviour (number of units). Body mass index was calculated using height and weight. A number of validated questionnaire were used including International Physical Activity Questionnaire (IPAQ) Long version, The Revised Illness Perception Questionnaire (IPQ-R) Diabetes Version, Health Value Scale (HVS), Exercise Benefits and Barriers Scale (EBBS), Exercise Belief Questionnaire (EBQ) Symons, Self-Efficacy for Exercise (SEE) Scale18-23.

Analysis was conducted using IBMÒ SPSSÒ Statistics, Version 21. Associations between physical activity scores on the IPAQ and the psychological factors were explored using Chi-squared tests, Kruskal-Wallis, Mann–Whitney U and Pearson’s correlation. Pearson’s Product Moment Correlation Coefficient was conducted to examine the relationship between demographic variables and Total MET-min/week, or the Leisure-Time Physical Activity (LTPA). Kruskal-Wallis testetween recruitment location and both Total MET-min/week and LTPA. Mann-Whitney U tests were conducted between physical activity and smoking behaviour, education level, and employment status. 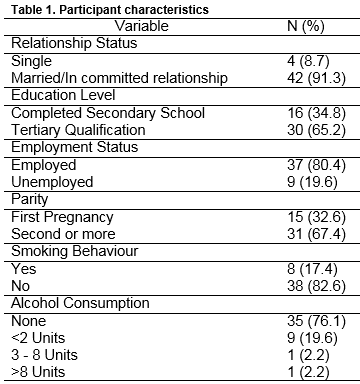 Correlation analysis between physical activity scores on the IPAQ and the psychological factors
Correlational analyses were conducted between both MET and LTPA physical activity scores, and each of the psychological measures; Health Value Scale, Exercise Benefits and Barriers Scale Total (EBBS), Benefits subscale, Barriers subscale, and the Self-Efficacy in Exercise Scale (SEE). Results revealed no significant correlations between any of the variables and Total MET-min/week scores. Significant results were found between the LTPA score, presented in table 2.

The IPQ-R data, representing the participants’ views about their illness, was analysed by comparing the mean scores on each of the seven subscales. The higher mean scores on the Personal Control and Treatment Control subscales indicated strongly held positive beliefs by participants in relation to the controllability of the illness. Lower mean scores were recorded for Illness Coherence, Consequences and Emotional Representations subscales, with both Timeline: acute/chronic and cyclical; subscales having the lowest mean scores. Means and standard deviations for each of the seven subscales are presented in Table 3.

In relation to the Causes subscale, four causes in particular were prominent in relation to the frequency of agreement from participants. The top cited cause was “Diet/Eating Habits” (80.4% agreement), followed by “Hereditary/It Runs in My Family” (63.0% agreement), “My Own Behaviour” (60.9% agreement) and “Ageing” (58.7% agreement). The remaining 14 causes listed were infrequently cited by participants in comparison to the above four causes. From the Exercise Belief Questionnaire the most noticeable behavioural beliefs to engaging in physical activity during pregnancy was; “Managing weight gain” (45.65%), while “Losing baby weight” (67.39%) was the most frequent behavioural beliefs for engaging in physical activity post pregnancy (Table 4). 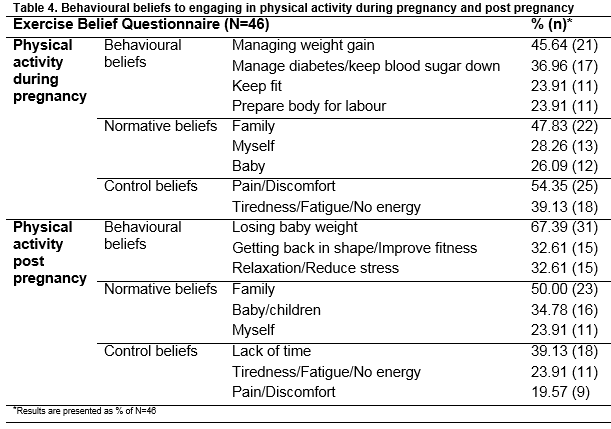 Discussion
This exploratory study describes physical activity scores among women with a diagnosis of GDM along with the psychological factors. Analysis of the data revealed that perceived benefits, barriers and exercise self-efficacy are significantly related to, and predict LTPA. Furthermore the Total MET-min/week score was not related to any of the psychological variables. Being physically active is important for any pregnant woman, however it may be more so, for women with GDM as they are at risk of type-2 diabetes later in life. Considering that approximately 40% of women affected by GDM may develop type-2 diabetes within four years7, addressing this public health issue is vital. Studies have shown that increasing physical activity can potentially reduce the onset of diabetes progression from GDM24 with physical activity in the early stages of pregnancy reducing the risk of GDM by 48%25.

Results from the IPQ-R subscale indicate that diet was the most frequently cited cause, suggesting an awareness of control. If this awareness could be transferred into a positive change, through taking control of their dietary habits and being more physically active, women with GDM could vastly improve their outcomes. The specific barriers and benefits to exercise cited by participants from the Exercise Belief Questionnaire, are in line with those recorded in previous research. Lack of time, fatigue and being too tired were commonly reported barriers11,16. There is a need to address these barriers and discover ways for women to overcome them if they are to stand any chance of adopting and maintaining exercise behaviour.

The study has a few limitations. The IPAQ is a self-report measure and is subject to bias. The IPAQ requires participants to separate physical activity into domains and intensity which could be misleading. Secondly, having obtained only a 45.5% response rate of 46 participants results are not generalisable. Two importance factors were omitted from the survey; a record of pre-pregnancy physical activity, and gestational period. Throughout the course of a pregnancy, barriers, benefits and beliefs can shift. Having had a record of pre-pregnancy exercise levels would have added an extra dimension to the analysis. Future research should focus on motivators and facilitators to exercise, means of overcoming barriers and changing dysfunctional beliefs and perceptions. To achieve this successfully, a more holistic approach is necessary, where psychological constructs and cognitive strategies are discussed and explored. There is a huge potential for behavioural strategies such as goal-setting, along with the use of technology to influence these exercise determinants1. Further research is needed to identify which strategies might be successful in increasing physical activity behaviour among this population.

Conflict of interest
The authors declare that they have no competing interests.