Investigation and diagnostic formulation in patients admitted with transient loss of consciousness.

Several commonly completed tests have low diagnostic yield in the setting of transient loss of consciousness (T-LOC). We estimated the use and cost of inappropriate investigations in patients admitted with T-LOC and assessed if these patients were given a definitive diagnosis for their presentation. We identified 80 consecutive patients admitted with T-LOC to a university teaching hospital. Eighty-eight percent (70/80) had a computerized topography (CT) brain scan and 49% (34/70) of these scans were inappropriate based on standard guidelines. Almost half (17/80) of electroencephalograms (EEG) and 82% (9/11) of carotid doppler ultrasound performed were not based on clinical evidence of seizure or stroke respectively. Forty-four percent (35/80) of patients had no formal diagnosis documented for their presentation. Inappropriate investigation in T-LOC is very prevalent in the acute hospital, increasing cost of patient care. In addition, there is poor diagnostic formulation for T-LOC making recurrent events more likely in the absence of definitive diagnoses.

Introduction
Transient loss of consciousness (T-LOC) represents one of the common reasons for presentation to the acute hospital1.The focus of the initial assessment in T-LOC is on a detailed history, physical examination and electrocardiogram (ECG) 2. This initial assessment can yield a diagnosis in the majority of cases3. While in certain circumstances more advanced testing may be required, several commonly completed tests have a low diagnostic yield in this setting. For example, in a series of patients presenting with syncope, computerized tomography (CT ) brain scan was shown to demonstrate a relevant abnormality in only 5% of cases, with each of these relevant findings in patients presenting with either headache, evidence of head trauma or focal neurological signs4. Similarly, neurovascular ultrasonography identified lesions that may have contributed to a presenting syncopal event in less than 2% of patients, but even in these cases the lesions were deemed to be unlikely the primary cause of syncope5.

EEG has been shown to demonstrate epileptiform features in 1.5% of patients with syncope, similar to the incidence in healthy adults6 and diagnostic yield in syncope is low even when an EEG is recommended by a neurologist7. The European Society of Cardiology (ESC) Guidelines for investigation of T-LOC do not include CT brain, neurovascular imaging or EEG within their diagnostic algorithm, instead detailing the importance of cardiac investigation, such as carotid sinus massage and orthostatic challenge8. Establishing the basis for the T-LOC event is important as it is a prerequisite for advising the patient regarding prognosis, as well as establishing an effective management strategy. Another important aspect of the acute care of patients with syncope is advice regarding their continued driving in the context of this index event. All patients presenting with T-LOC should receive appropriate advice based on the locally nominated driving guidelines, which should include sections relevant to unexplained syncope, explained syncope and seizures9. The aim of this study was to estimate the use and cost of inappropriate investigations in patients admitted with T-LOC, specifically focusing on CT brain, carotid doppler ultrasound and EEG, and to clarify if these patients were given a definitive diagnosis for this presentation, as well as appropriate advice around driving.

Methods
We used the Hospital Inpatient Enquiry System (HIPE) to identify 80 consecutive patients discharged from hospital after presentation with either collapse or presumed syncope. The study site is a university teaching hospital with specialist geriatric medicine, neurology and cardiology services. There is no dedicated falls and syncope service, and instead, the specialist consultation work in this area is divided amongst these specialties based on the demographic of the patient and clinical presentation. Most patients presenting with syncope are admitted under the general medical service. We reviewed the electronic medical records of these patients, specifically the investigations carried out while they were an inpatient, including the indication for these investigations, as well as the discharge summary sent to their general practitioner (GP) upon discharge.

We collected basic demographic data, including length of stay (LOS), as well as information on inappropriate testing, documentation of diagnosis for T-LOC and documentation of advice regarding future driving post T-LOC. The specific tests we examined were CT brain, EEG and carotid doppler ultrasound. CT brain was considered an inappropriate investigation if it was performed in the setting ofsyncope / T-LOC in isolation, without any evidence from clinical assessment of head injury, focal neurology or seizure markers8. EEG was considered inappropriate in isolated T-LOC without any evidence of seizure markers or prolonged loss of consciousness from clinical assessment8. Carotid doppler ultrasound was considered inappropriate if there were no signs or symptoms suggestive of stroke or transient ischaemic attack (TIA)8. We estimated the cost of inappropriate testing based on the cost per item used by Mendu et al10. GP discharge summaries were examined for documentation of a specific diagnosis for syncope. Descriptive terms such as ‘syncope’ or ‘collapse’ were not considered as final diagnoses. We also examined the discharge summaries for advice based on driving guidelines post this event. 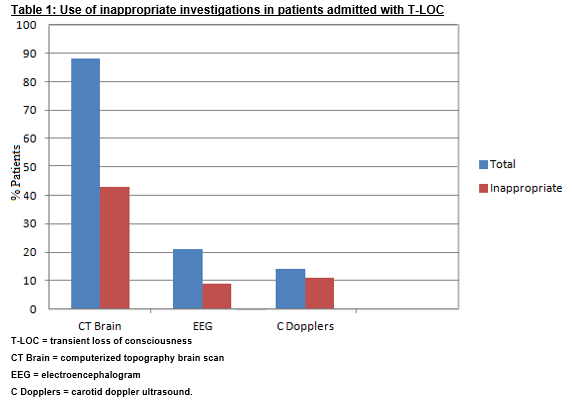 Admitting Service
Over 90% (73/80) were admitted under a medical service. However, less than one third (25/80) were admitted under a service considered to have specific competency in management of T-LOC (Geriatric Medicine, Neurology, Acute Medicine, Cardiology). Patients admitted under one of these specialties with competency in syncope assessment had a lower mean number of inappropriate investigations (0.36 +/- 0.57 vs. 0.75 +/- 0.80, p = 0.0328), as well as being less likely to have more than one inappropriate test (4% vs. 22%, p = 0.045). Admitting service had no statistically significant effect on LOS or documented diagnosis however. 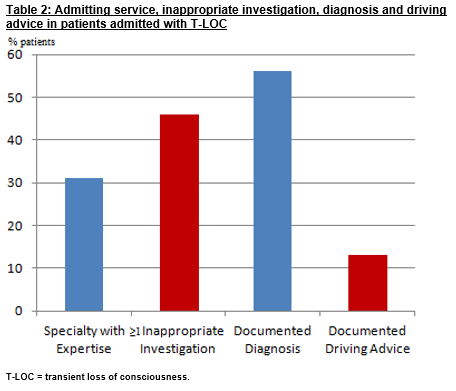 Discussion
This study shows that almost half of the patients admitted T-LOC undergo inappropriate investigations during the admission. Almost 90% of these patients have a CT brain but only half of these scans are for appropriate indications in this setting such as headache, focal neurology, seizure or head trauma. Less than one third of patients were admitted under a specialty with competency in managing this cohort of patients, and these patients were less likely to undergo inappropriate testing during the admission. Documentation of the final diagnosis for T-LOC, as well as driving advice based on this is also poor. If a diagnosis is not established, it is unlikely that an effective treatment plan has been put in place, making recurrent events and the morbidity attached to these more likely. The cost of inappropriate investigation is considerable, averaging over €270 per patient admitted with T-LOC. The cost per item used was based on a US study, so differences between health systems need to be considered when analyzing this. However, this cost is likely an underestimation given that it does not include the impact extra testing can have on prolonging LOS. Additionally, inappropriate investigation can also have service implications beyond the individual patient involved, restricting access of other patients to timely diagnostic testing. Like most clinical sites in Ireland, the study site does not currently have a specialist syncope assessment unit11 and at the time of this study did not have a protocol for the acute medical management of T-LOC. Studies have demonstrated that dedicated units improve clinical management of patients with T-LOC, as well as reducing costs of patient care12. Furthermore, explicit pathways for syncope management and investigation have also been shown to reduce inappropriate investigation13 and time to diagnosis in patients with T-LOC14.

There are some important limitations of this study which must be considered. Whilst a diagnosis may not have been documented in the GP discharge summary, this does not necessarily mean a diagnosis was not made. This is also the case for documentation of driving advice. However, the importance of communicating this information to the GP should not be underestimated. In some cases patients may not be driving, so driving advice was not warranted. However it is also important that non-driving status is documented in the medical summary. While data pertaining to the admitting service for each patient was collected, we did not capture any data regarding consults to specialist services during the admission so we cannot account for the impact of consultations to specialist services.

Despite these limitations, this study highlights some important issues around the acute care of patients with T-LOC, chiefly that many are subjected to inappropriate investigation while in hospital, and that almost half leave hospital without a diagnosis communicated for this episode.