An evaluation of the clinical yield of inpatient long-term video-EEG (vEEG) in a new epilepsy monitoring unit (EMU) was undertaken, with findings compared to the centre’s prior method of bedside vEEG recording in a standard neurology ward, as reported in 2004. A retrospective analysis of neurophysiology reports for all adults who underwent elective vEEG monitoring in the EMU at Cork University Hospital between January 2015 and July 2016 was conducted. Of 115 vEEG studies in the EMU, 100 (87.0%) were deemed diagnostically conclusive, 14 (12.2%) failed to catch any clinical events and showed normal EEG throughout, and one (0.9%) captured spells of unclear clinical significance—the corresponding figures reported in 2004 for bedside vEEGs were 21.3%, 77% and 1.6%, respectively. The EMU offers a more effective method of recording inpatient vEEG, which aids decision-making and improves clinical outcomes. Some evidence-based measures which could further enhance diagnostic yield are discussed.

Introduction
Inpatient long-term video-electroencephalography (vEEG) monitoring is widely accepted as the ‘gold standard’ investigation for distinguishing epileptic seizures from seizure mimics1, as well as for classifying epilepsy syndromes and evaluating patients with drug-refractory epilepsy (DRE) for possible epilepsy surgery2-4. Prior to 2015, inpatient long-term vEEG monitoring at Cork University Hospital (CUH) was conducted for diagnostic and seizure classification purposes on a general neurology ward over 72 or 96 hours, using a portable digital vEEG system and a single camera mounted on a trolley at a patient’s bedside. Seizure-provocation measures, such as anti-epileptic drug (AED) reduction and sleep-deprivation, were not routinely implemented on account of safety and short time-frame. Patients were encouraged to remain in front of the camera but their position was not continuously checked. An audit in 20045 evaluated all ‘bedside’ vEEG studies over four-years from 1998 and found only 23% of 122 recordings captured clinical episodes, while 77% were described as “negative” on the basis that no clinical change was observed on video and EEG was normal.

A dedicated epilepsy monitoring unit (EMU) opened at the centre in January 2015 as part of the National Clinical Programme for Epilepsy. This now provides two of the six inpatient vEEG beds available across Ireland’s Health Service Executive and is equipped with an integrated digital vEEG recording system (Natus Medical Incorporated Xltek EMU40EX) that utilises two ceiling-mounted cameras per bed. Electroencephalogram (EEG) scalp electrode placement is unchanged (21 electrodes of the modified 10-20 International System). Admissions are for diagnostic clarification, seizure classification and pre-surgical evaluation. The EMU is clinically led by a consultant epileptologist and an epilepsy fellow. Patients remain on the unit for the entire duration of admission to minimise time spent off-camera. Cumulative seizure-provocation measures are routinely employed to induce events in a controlled and safe environment. EMU nurses—present 24 hours per day, seven days per week—ensure patient safety, observe for clinical signs of seizures and interact with patients to demonstrate ictal semiological features. Recordings are independently reported by a clinical neurophysiologist and cases are discussed at a weekly multi-disciplinary team meeting. The purpose of this study is to 1: evaluate the findings of vEEG from the new EMU; 2: to compare these to the 2004 audit outcomes; and 3: to highlight pragmatic and evidence-based measures for further improving the diagnostic yield and utility of vEEG monitoring.

Methods
In August 2016, a retrospective analysis was conducted on neurophysiology reports for all adults undergoing elective vEEG monitoring in the EMU at CUH within its first 19 months of operation (January 2015-July 2016). Demographics and vEEG findings were noted. Supplementary review of medical and nursing charts clarified details as required. 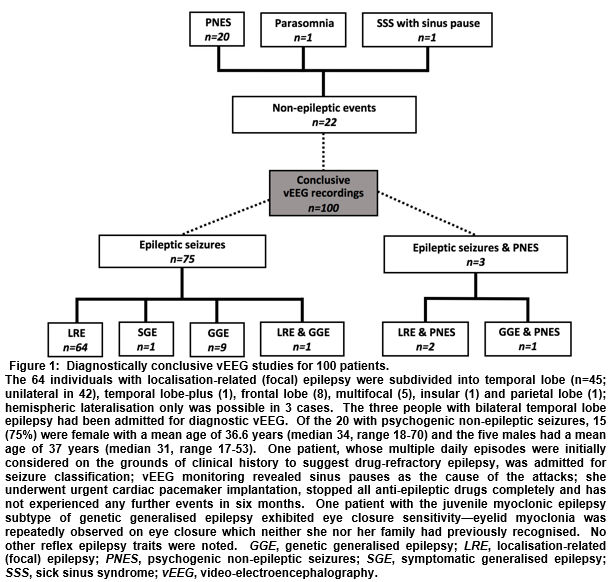 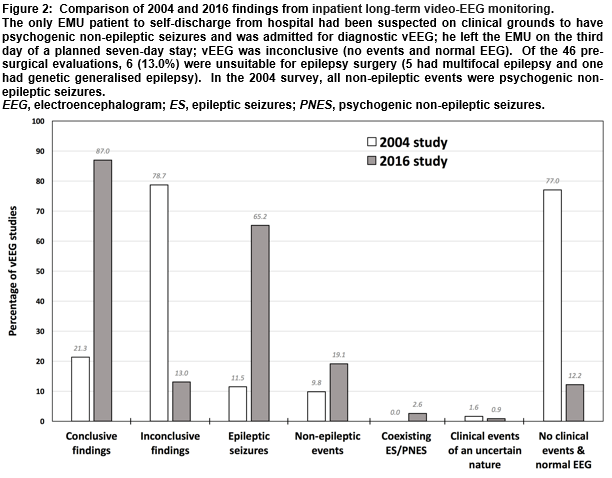 Discussion
Although definitive diagnoses can be obtained from bedside vEEG and ambulatory vEEG, there is a more than four-fold increase in diagnostic yield with the new EMU vEEG studies compared to those from the previous system at CUH. This is likely to be largely attributable to clinically-led seizure-provocation measures, which can only be performed safely in a continuously supervised setting6,7, such as an EMU. In addition, the EMU nurse-led interactive protocol examines for ictal semiological features that can assist seizure localisation but which may not otherwise be entirely clear (e.g. confusion versus expressive dysphasia), and the longer mean duration of EMU vEEG, with multiple cameras fixed on patients at all times, increases the likelihood of acquiring habitual episodes. In the 2004 audit, no patients were found to have more than one form of epilepsy and none were categorised as having epilepsy and coexisting PNES. Although these ‘dual’ diagnoses are uncommon8,9 and may have been genuinely absent from the previous cohort, it may be that fewer epileptic seizures occurred without seizure-provocation measures, that only one type of attack occurred within the shorter timeframe, or that both event types manifested but were incorrectly assumed to have the same underlying aetiology.

The 14 patients whose epileptic seizures were captured over the four years of the 2004 survey had their attacks grouped as temporal (21.4%), extra-temporal (57.1%) and generalised (23.4%)—corresponding to figures for the 78 EMU patients of 57.7%, 20.5% and 14.1%, respectively. The significance of the differences in categorisation is uncertain, given the small numbers in the former study. Generalised epileptic discharges on EEG may have focal features but an assessment of the stability of an apparent focal abnormality and the lead-in of the generalised discharge—necessary in order to discriminate between secondary bilateral synchrony and the waveform of genetic generalised epilepsy—may have been less reliable with fewer clinical episodes to examine, possibly resulting in misclassification. Before the EMU was established at CUH, suspected epilepsy surgery candidates were referred directly to a surgical centre for pre-surgical evaluation monitoring, and any diagnostic/classification vEEGs that suggested suitability for surgery required repeat monitoring at a surgical site. The fact that pre-surgical evaluation is now performed at CUH represents a selection bias in this study, in that the patients chosen for this are more likely to have frequent attacks—however, this group represents only 40% of EMU admissions, so does not account for the entire increase in diagnostic yield.

Of the EMU-monitored cohort, 14 individuals have had successful epilepsy surgery; 11 await surgery or invasive phase II EEG monitoring to delineate a surgical target; three were deemed good candidates but declined surgery; and five received vagus nerve stimulator implants. Other possible benefits from EMU admission include the opportunity for AED adjustments and focussed counselling on lifestyle measures to try to improve seizure control and reduce drug side-effects. There is some ‘therapeutic’ value associated with an EMU stay for some PNES patients who take stock in the validity of a conclusion derived from a rigorous work-up. This can aid acceptance of the diagnosis—considered a prerequisite for managing attacks—and the appropriate education, psychotherapy, behavioural therapy or psychiatric treatment can often start before returning home.

Epilepsy by its nature is unpredictable and it would not be realistic to expect 100% of patients to have clinical episodes during a limited span on the EMU. The proportion of vEEGs capturing seizures on the EMU at CUH is in the range of 70-90% typically quoted in the published literature3,10. Nevertheless, certain internationally recognised and evidence-based measures could further improve the diagnostic yield and utility of vEEG recording and could potentially increase the number of people with MRI-negative DRE who could proceed to surgery. The use of inferior temporal electrode chains, surface electromyography and voltage mapping for source localisation are increasingly recommended as key routine components of vEEG monitoring11-13. A flexible approach to the selection of reference electrodes for certain suspected epilepsy subtypes and the use of extra EEG electrodes (e.g. sphenoidal electrodes, foramen ovale electrodes, 10-10 System) when clinically indicated could also be considered14-16. Identifying reflex epilepsy traits can be helpful from a diagnostic/classification and prognostic perspective and may offer non-drug methods for improving seizure control (i.e. protection against or avoidance of triggers). As reflex epilepsy traits are not always recognised by patients or detected on routine outpatient EEG, testing for these in the EMU could prove valuable in some cases17-19. Establishing an accurate diagnosis of epilepsy and/or PNES in a timely manner contributes to reducing the risk of harm to patients and improves long-term health outcomes20-22. It is estimated that once DRE is identified, 1% of people will die from sudden unexpected death in epilepsy every year and 12% will die (all-cause mortality) over the next two years23. Despite the fact that epilepsy surgery is the most effective treatment option for DRE and has been shown to be cost-effective24,25, it remains under-utilised. Earlier referral to an epilepsy centre of DRE or cases involving diagnostic uncertainty should be encouraged and EMU capacity must match clinical need to avoid potentially harmful diagnostic delays and barriers to effective treatment. In conclusion, the EMU offers a significantly more effective and efficient method of conducting inpatient vEEG, and patient care has improved as a result.

Conflict of Interest declaration:
The authors confirm that they have no conflict of interest to declare in relation to this work.