Methods
Data was collected from the patient’s chart and from radiology and laboratory systems in our institution.

Results
The patient had a temporal artery biopsy confirming the diagnosis of temporal arteritis. This was successfully treated with high dose steroids leading to resolution of symptoms in the arm.

Conclusion
Arteritis is an important consideration to consider in patients who present with limb ischaemia as it is a reversible cause which can be treated effectively.

Introduction
Giant cell arteritis is an inflammatory condition which typically involves granulomatous infiltrates typically affecting medium and large vessels 1. Classically affecting the temporal artery, it can occur in other locations and patients can present systemically unwell 2.

Case Report
A 64 year old lady presented to the Medical Assessment Unit at our hospital with right upper limb pain for 5 days. The pain was worse on movement and she had associated numbness and paraesthesia in the digits of the right hand. She also reported a two-week history of “flashing lights” in her left eye along with headache. Her laboratory results showed: white cell count 10 x10^9/L (4-11), haemoglobin 103 g/L (133 – 177), platelets 655 x10^9/L (150 – 400), alkaline phosphatase 2.7 µkat/L (0.67 – 2.51) and C-reactive protein (CRP) 630 mg/L (<50). The remainder of the laboratory results were within normal limits. A background medical history was significant for hypertension, migraine and a being a current smoker of 12 cigarettes/day. There was no significant family history. On examination of the right upper limb there was pallor evident along with reduced capillary refill. The radial, ulnar and brachial pulses were impalpable. There was normal tone power and reflexes. The left upper limb and both lower limbs were normal. Vital signs were unremarkable.

The initial diagnosis was of an ischaemic limb and a management plan of unfractionated heparin plus analgesia was initiated. A CT angiogram of the aortic arch and right upper limb was subsequently arranged and showed an occlusion of the right axillary artery with good collateralisation (Fig 1). 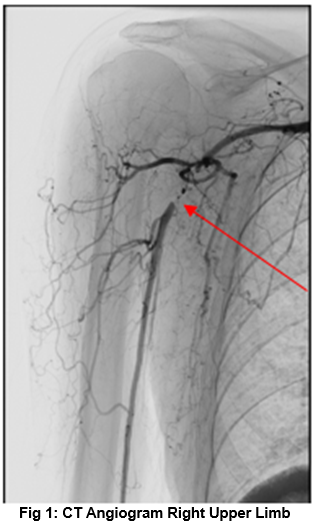 The right axillary artery occlusion could not be crossed on radiological guided angioplasty. The patient was treated conservatively with aspirin and statin therapy, and subsequently discharged. She was reviewed a month later and reported progressive symptoms of weight loss, lethargy and night sweats. Clinically there was reduced power and function of both upper limbs. Pulses were absent bilaterally distal to the subclavian artery. Blood pressure was unrecordable in the arm. Repeated laboratory investigations showed: Haemoglobin 90 g/L, erythrocyte sedimentation rate (ESR) 101mm/hr and CRP 180 mg/L.

At this point, she was assessed by our Rheumatology service. A differential diagnosis of giant cell arteritis (GCA) or Takayasu arteritis (TA) was recorded. A temporal artery biopsy was carried out and showed a predominantly lymphocytic inflammatory infiltrate in the temporal arterial wall and fractured internal elastic lamina consistent with GCA. Treatment with pulsed methylprednisolone, followed by oral prednisolone was initiated. Follow up in outpatients one month later confirmed a fully asymptomatic patient with a significant improvement in upper limb pulses bilaterally. Repeat laboratory investigations confirmed a declining ESR of 46 mm/hr.

Discussion
This case demonstrates the importance in carefully considering the differential diagnosis of upper limb ischaemia and the overlap in the two most common large vessel vasculitides GCA and TA3.There are a number of causes of upper limb ischaemia, the most common being atherosclerosis but also including arterial dissection, thromboembolism, thoracic outlet syndrome, small vessel vasculitis, and vasospasm in conditions such as Raynaud’s syndrome 4,5.

Giant cell arteritis is the most common form of systemic vasculitis in patients aged ≥ 50 years of age, it is a large vessel arteritis and commonly involves branches of the carotid and temporal artery1. It can however, involve the aorta and other branches including the brachiocephalic, axillary and subclavian arteries which can present as limb ischaemia. There are a limited number of cases in the literature outlining the importance of considering arteritis as an important cause of ischaemic limb6. The involvement of large arteries makes the formal diagnosis more difficult as the clinical presentation overlaps with Takaysaus arteritis although the age profile is different2.  The 1990 American College of Rheumatology for diagnosis of giant cell arteritis (Table 1) outline diagnostic criteria which can be applied. Three of the five features must be present to support a diagnosis of giant cell arteritis7. Diagnosis can be challenging, particularly as symptoms associated with the temporal artery may not be present.

The author has no conflict of interest to declare.