Hospital overcrowding is evidenced by Emergency Department (ED) overcrowding. The Full Capacity Protocol (FCP) is activated to move patients to temporary extra beds placed in the inpatient wards. This research aims to establish patient preferences when waiting for a ward bed in an Irish Hospital.

The FCP in Beaumont Hospital was updated in the context of national guidelines. Patients’ attitudes towards boarding in the ED as opposed to being in extra beds on the wards were assessed using a questionnaire based structured interview.

Moving patients from the ED into extra beds on the wards creates space, facilitating safer care delivery. The vast majority of patients who have experienced both, prefer being boarded in the ward rather than in the ED.

Introduction
The capacity challenges in the acute hospital system in Ireland are manifested with overcrowded Emergency Departments and postponed admissions and lengthening waiting lists for all services. Overcrowded hospitals have generally had profoundly overcrowded Emergency Departments whilst wards have been at full occupancy. Overcrowding refers to greater numbers of patients utilizing an area than that area has the capacity to accommodate.

In 2006 and 2014 the Health Service Executive created multidisciplinary task forces to address ED overcrowding. An emphasis was placed on improving the patient experience and reducing patient numbers and the length of time waiting in the ED.1,2,3 In 2006 hospitals were found to be operating at nearly 100% capacity. Optimal performance for hospitals occurs at 85% occupancy which allows admitted patients to be moved to wards in a timely manner.2 One area where improvements were recommended was that of patient flow through the use of enhanced capacity management processes. Despite the formation of these task forces and the implementation of measures to improve patient services, EDs are still frequently overcrowded.3

The inability of patients requiring emergency admission to be moved to ward beds in a timely manner is thought to be one of the key contributing factors to ED overcrowding. Delays in accessing wards results in patients admitted through the ED being boarded on trolleys and chairs in the ED for extended periods of time often including overnight stays.4 It is recognised internationally that overcrowding in the ED is an impediment to receiving timely and effective healthcare and a cause of increased levels of poor patient outcomes. ED overcrowding results in reduced quality of care, prolonged total length of stay, unfavourable outcomes, and increased patient mortality.5,6,7,8 The increased mortality due to Emergency Department overcrowding is seen in patients of different ages, with varied conditions and at all times of year, hence the need to address ED overcrowding is no longer an issue of resource management but of patient safety.7

To help tackle ED overcrowding Dr. Peter Viccellio introduced the use of the “Full Capacity Protocol” (FCP) to Stony Brook Hospital, New York. The FCP is now used in a number of hospitals across the U.S. and Canada9 and was included in a national directive to guide hospital escalation policies in Ireland10. When the FCP is activated, patients are admitted to inpatient wards into temporary additional beds until a permanent bed in the appropriate ward becomes available. Implementation of the FCP can potentially have a positive effect on ED overcrowding, length of stay and patient satisfaction.9,11

Methods
The study was approved by the Royal College of Surgeons in Ireland Research Ethics Committee and all patients included in the study gave written consent. The study was conducted between January 18th 2016 and July 29th 2016. The FCP in Beaumont Hospital was updated following a review of the current literature to allow greater flexibility as to which patients could be moved into extra beds. The updates brought the FCP in line with the national directive as set out by the Minister for Health, the Director General of the Health Service Executive10, and also incorporated recommendations from the Irish Association for Emergency Medicine12

Beaumont Hospital is a teaching hospital located 5km north of Dublin City centre providing services to a population of 290,000 people. The hospital employs approximately 3,000 members of staff and has 820 beds.13

The FCP is the final step in the escalation protocol and is employed when other actions have failed to alleviate pressure on the ED. When the FCP is implemented temporary beds are placed on wards and suitable boarded patients are moved out of the ED to those extra beds. Patients who are ambulant, who do not have infectious diseases, are not confused, not requiring intensive or coronary care management, not requiring suctioning and not requiring more than four litres per minute of oxygen are deemed suitable and appropriate to be placed on extra ward beds.

A Structured questionnaire was developed to compare patient satisfaction with boarding in the ED versus boarding in extra beds on the wards. Questions were selected to collect basic demographic information, general questions on their experience of the ED, and a mixture of open and closed questions designed to compare boarding in the ED with boarding in the extra bed on the ward. All patients in the hospital who had been moved to an extra bed on a ward as a result of the FCP and were still in the hospital when the survey was conducted were offered the opportunity to take part in the study if they were capable of consenting. The research team administering the survey asked the patients the questions and recorded the answers provided into a standardized form.  Patients were then asked a series of closed questions to rate specific aspects of their stay in each area of the hospital, and to give a preference for one of the areas, using a five point Likert Scale.

For statistical purposes patients were grouped based on their preference for location to be boarded as an extra patient. These groups were then assessed thematically by assessing each quality of stay indicator to account for the reasoning behind their preferred location. The data for patients who preferred the temporary ward bed was compared to the patients who preferred boarding in the ED or those who felt there was no difference between the two areas. For each theme assessed the results were simplified to reflect a preference for the ward, preference for the ED, or having no preference between the two areas. Comparisons were made between groups of patients based on age (less than 50 years of age versus 50 years and above), gender and their duration of stay in the ED and their preferences. Fisher’s exact tests were used to determine if each assessed group of patients and their preferred location was statistically significant for the various outcomes.  Fisher Exact tests are used rather than standart chi squared tests where some estimated cell numbers are low (i.e. <5). A Fisher Exact result (p value) was considered to be significant for values less than 0.05. Statistical software used for the analysis was Stata SE (version 13, College Station, Texas).

Patients were asked to compare the extra bed to being boarded as an extra patient in the ED under a number of qualitative headings. (Figure 1) In general the data in each section showed a propensity towards favouring the extra bed on the ward.

With different profiles of age, gender and time spent in the ED, we examined if significant difference between groups based on the above and qualitative stay outcomes could be determined (Table 1). The only result approaching significance was that older patients showed a marked preference for ward beds over the ED in ability to sleep at 95%(38 of 40). The younger cohort, though not as strongly favouring the extra ward bed, still had a high preference at 78% (46 of 59).  Most of the other results show a strong similarity in patient preference relating to hospital treatment.

The primary concern expressed by patients in our study about the extra beds was the absence of conveniences not afforded to the extra beds such as curtains for privacy, storage lockers for personal belongings and access to power sockets to charge electronic devices. When asked about the ED patients said they were "not expecting a lot", and that "it was mayhem, packed on them",  "I could see it was packed when I got there", and "no sooner than they have a trolley washed another patient arrives in". With regard to boarding in the ED patients reported "I just accepted I had to stay on a chair all night" and "the hardest thing about it was the chair”. One patient felt "very lucky to get a cubicle". Patients said that the "staff were great and efficient but under constant pressure", "They're doing the best they can". The prevailing sentiment was that patients "didn't want to be down there".

When asked about the extra bed on the ward patients replied "It's grand after being down there", "10 times better than downstairs", "A bed's a bed… just want to get better and get out of here", "it's grand, better than the chair". Some went as far as describing it as "like winning the lotto” or that they were "one of the lucky ones [and] got a bed in a few hours".

Figure 1: Comparisons made between the extra beds on the ward vs. the ED 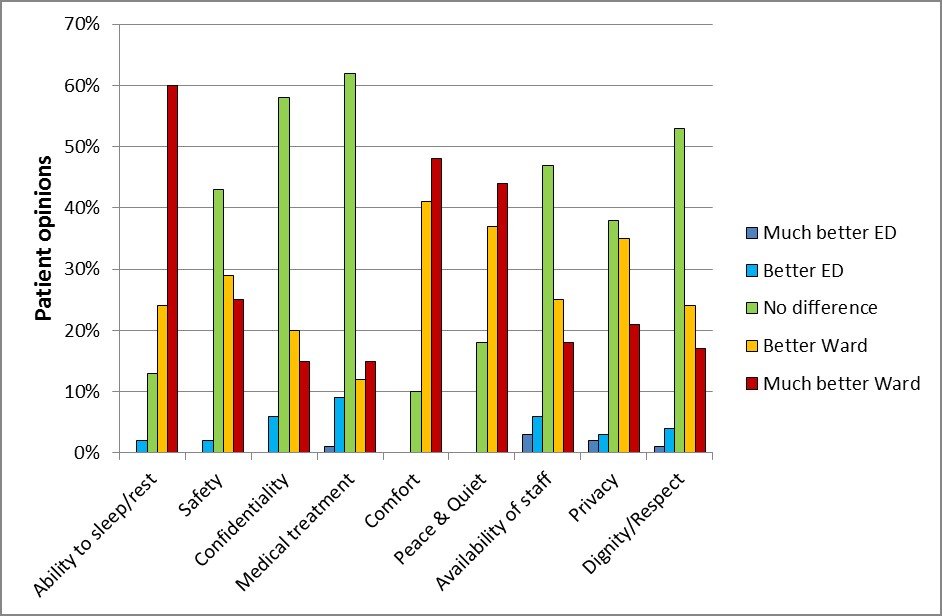 Table 1: Preference of stay and QOS based on age, gender and time spent in the ED. (QOS = quality of stay, ED = Emergency Department, W = Ward, ND = No Difference). 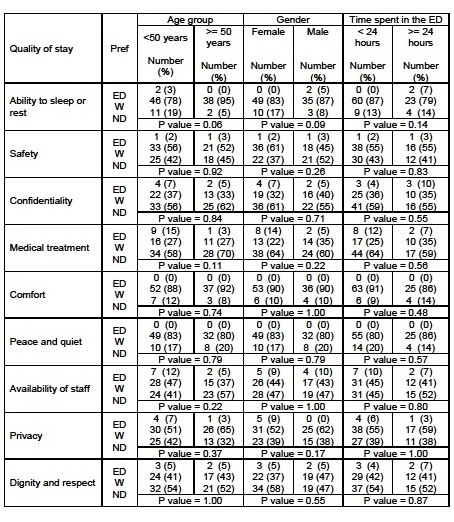 Discussion
The limitations of this study include that this was a single centre study in Dublin, Ireland that was performed in a particularly overcrowded adult only Emergency Department on a limited number of patients, as a result the findings may not be applicable to other centres although it did correlate well with the findings of international research in this area. The transcription process when recording the patient responses is a potential source of bias.

Based on the answers given in the questionnaire it was determined that patients preferred to be additional patients in extra beds on the wards rather than in the ED (83 of 99 patients, 83.83%). This finding agrees with other studies into patient preferences towards boarding which range between preference rates of 42% to 85% for extra beds on the ward14,15,16,17 The data created in this study correlates well with the data produced by Viccellio et al. in Stony Brook Hospital, New York which evidenced a preference for boarding in inpatient hallways of 85%.17 Where this study differs from similar studies is that the extra beds in Beaumont Hospital are not placed in hallways but are placed behind doors in the ward areas just off the hallways.

The closest comparable finding between the Viccellio et al. study and this study was the preference for inpatient boarding with respect to the ability to sleep and rest. Other studies have noted that having an overcrowded ED has been associated with increased rates of ambulance diversion. With the introduction of an FCP the frequency of ambulance diversions can be significantly reduced.18,19,20,21

The use of the FCP to combat ED overcrowding acknowledges that crowding is evidence of system failure and requires reform measures from all parts of the health care system.22,23 Resistance to the FCP amongst medical, nursing, and administration staff is due to a perceived risk of reduced quality outcomes resulting from placing patients in extra beds on wards24. Following the implementation of the FCP in Stony Brook University Hospital, Viccellio et al. monitored patient outcomes of 2043 patients placed in additional beds in hallways and they found no increased risk of mortality.22

The authors declare no conflicts of interest. We would like to acknowledge the RCSI research summer school for funding.