Quick, painless, cheap and reliable, the sweat test remains the gold standard diagnostic test for cystic fibrosis. We aimed to describe the pattern of testing in Ireland over a calendar year.

Information on sweat test practices was requested from each centre between 1st January 2011 and 31st December 2011, and the number of positive, negative, equivocal, and insufficient samples was recorded.

Our study demonstrates a high number of sweat tests performed in Ireland with significant variation in sweat testing practices across 15 different sites.

Introduction
The sweat test is a remarkable investigation. It was developed after insights gained when a heat wave in New York in 1948 resulted in numerous children with cystic fibrosis (CF) presenting with salt-losing dehydration (Pseudo-Bartter’s syndrome)1-5.The sweat test described by Gibson and Cooke has stood the test of time, remaining essentially unchanged since their seminal paper in 19594. Despite the widespread availability of CF mutation analysis, the sweat test remains the gold standard diagnostic test for CF6,7. It is quick, virtually painless, cheap and reliable. Ireland has the highest birth incidence of CF in the world, with 1 in 1350 new-born infants affected and approximately 30-40 new diagnoses made each year8,9. New-born screening (NBS) for CF was introduced in Ireland in July 2011 with the aim of diagnosing infants in the first few weeks of life10. Sweat testing standards have been published and should be adhered to by centres performing diagnostic sweat tests11-15. The aim of this study is to describe the pattern of sweat testing in Ireland over the calendar year 2011.

Methods
The Health Service Executive (HSE) hospital directory was used to identify every hospital in the republic of Ireland. The Chief Medical Scientist / Consultant Biochemist / Chemical Pathologist in each hospital was contacted by phone, by RG and SW, to ascertain if sweat testing was performed in their hospital as part of a clinical diagnostic service. Centres performing sweat tests only as part of a research study or clinical trial were excluded. OB then contacted each centre with an introductory letter outlining the study and inviting participation, along with a written questionnaire. The following information was requested; where, and by whom, sweat testing is performed, method employed to induce and collect sweat, and to analyse and report sweat values, number of sweat tests performed between 1st January 2011 and 31st December 2011, and the number of positive, negative, equivocal, and insufficient samples. In addition, we invited the centres to share their anonymised raw sweat test data from January 1st to December 31th 2011 containing date of sweat test, date of birth, gender, sweat chloride and conductivity values. Sweat test results were classified as follows: positive (Cl- > 60 mmol/L), negative (Cl- < 40 mmol/L) [if < 6 months old Cl- < 30 mmol/L], equivocal (Cl- 40 - 60 mmol/L) [if < 6 months old Cl- 30 - 60 mmol/L], quantity not sufficient (QNS). The cut off values for sweat conductivity were classified as; positive > 90 mmol/l, negative if < 60 mmol/l and equivocal if 60-90 mmol/L. Ethics approval was obtained.

In 2011 there were 2555 sweat tests performed in Ireland. There was a wide range in the number of sweat tests performed in each centre over the one year study period, from 35 to over 450 (table 1). In nine centres the sweat test is performed by a laboratory scientist, in four centres by a nurse, in one centre by a laboratory scientist or nurse, and in one centre by a nurse phlebotomist. The method of sweat induction is aqueous solutions (Pilocarpine and electrolyte solution with no chloride) in three centres, and Wescor Pilogel® discs in the other 12 centres, (all users of the Macroduct® system use the gel discs). The method of sweat collection was filter paper for three centres using the Gibson and Cooke procedure, and Wescor Macroduct® for the others. No centres used gauze. Three centres using the Wescor system were using the Wescor Nanoduct™ system. All sites, except one, were performing their own in-house sweat analysis, with one centre (centre 9) sending their sweat samples to centre 2 for analysis. Three laboratories perform sweat chloride analysis using a direct ion selective electrode, and eight centres use a coulometric method. Three centres measure sweat conductivity alone (not recommended as per UK guidelines version 2011), without chloride. All labs using ISE or coulometric methods measure sweat chloride in duplicate provided there is sufficient sample volume. Only laboratories using Gibson and Cooke method can report sweat volume/weight, but most centres do not report sweat volume (13 out of 14, [93%])  or sweat weight (12 out of 14, [85%]) (one centre provided no data). Eleven (79%) centres report sweat chloride, and three (21%) centres report sweat conductivity only (no data from one centre). Of the eleven centres reporting sweat chloride, nine (82%) also report the conductivity value. Three centres additionally report the sweat sodium value.

From 2555 sweat tests, 35 (1.4%) were in the diagnostic range. This equates to 73 tests performed for each positive test result. The overall QNS rate was 10.3% (263/2555), but there was a wide variation in QNS rates reported across different centres. Six (6/15, 40%) centres did not report a QNS rate or reported a zero value. Of the nine centres that reported QNS numbers the rate ranged from 5.7% to 28.3%. Causes of variability include; variation in record keeping, duplicate QNS tests recorded as one event, and repeat QNS not being documented. Sweat chloride and/or conductivity data was missing from just 13 tests, leaving 2542 for analysis. Although predominantly performed in young children sweat testing was performed across a wide age range with the youngest 2.5 weeks old, and the oldest 75 years old, with a mean of 3.87 years and median of 1.79 years.  Only 76 (3%) patients were 18 years or older when tested. The majority of these patients had normal sweat tests, with two in the equivocal range, and three in the diagnostic range; a 28 y/o with a sweat chloride value of 63 mmol/L, a 37 y/o with a value of 106 mmol/L, and a 48 y/o with a value of 81 mmol/L. Ten (13%) of the 76 tests were QNS, with 7 of these 10 occurring in the 13 tests performed in individuals over 60 y/o giving a QNS rate in the this oldest cohort of 54%.

Of 2542 tests, sweat conductivity alone was measured in 162 tests (6.2%) from three centres, leaving 2117 tests available for sweat chloride analysis. The mean sweat chloride value for the entire cohort was 16.5 mmol/L (SD 16.1 mmol/L) with a median of 13.0 mmol/L. However, as can be seen from figure 1, the sweat chloride values are spread across a spectrum of values from < 5 mmol/L to 124 mmol/L with two peaks in frequency, one centred around the 15 mmol/L for the non-CF population, and a second centred around 100 mmol/L representing the CF cohort. 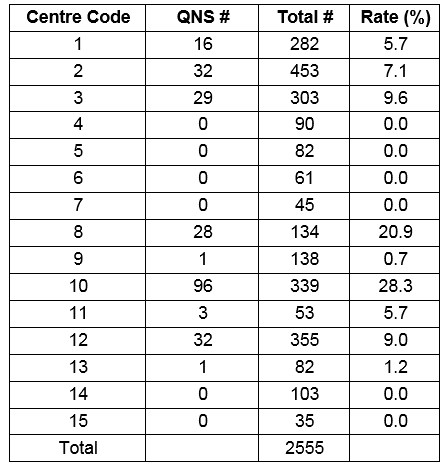 Discussion
National surveys of sweat testing practices have been published previously from other countries, but our paper presents the findings of the first such study performed in Ireland, and is considerably more detailed than previous published studies16-18. The high incidence of CF in Ireland is well known in the medical community, and also in the wider general population, which may partly explain the high number of sweat tests performed9. At 2555 tests in 2011, to detect one positive sweat test for every 73 tests performed, the “diagnostic rate” is considerably different to that published for the UK, with a median diagnostic rate of one positive sweat test for every 30 tested18. Our study demonstrates variation in sweat testing practices across 15 different sites, which is a similar pattern found in studies from other countries16,18. Two sites perform less than 50 tests a year, and (in addition to one other site) are not reporting sweat chloride values, relying instead on conductivity values alone, which is contrary to current UK guidelines indicating sweat chloride should be reported for all diagnostic sweat tests12.

The rate of QNS varied hugely across the centres. Some centres report a QNS of 0%. This is surprising as even the best centres, testing many patients, will have some QNS results. The UK Guidelines suggest an overall QNS rate of 10% is acceptable12. Conductivity values can be obtained from very small sweat volumes but guidelines continue to state that conductivity alone should not be used for diagnosis12. We observed anecdotal variations in reporting practices for QNS tests; from not reporting these tests at all, to not reporting QNS on the first test if a second test on the same day was sufficient, to performing two sweat tests simultaneously on different parts of the skin and not reporting QNS if at least one test was sufficient. A consensus on reporting QNS across all centres would allow a meaningful comparison of QNS rates across sites with the ultimate goal of improving performance across the country. This is particularly important when testing small infants as part of the CF NBS programme diagnostic algorithm. Due to their small size and young age (typically 3 weeks old) these infants are at the limits of sweat test performance. The UK guidelines suggest it should be possible to obtain sweat from infants with a weight greater than 2kg and over two weeks of age (if born at term), but acknowledge a higher QNS rate of up to 20% may be seen in this young cohort12.

Our study was designed to examine sweat testing in Ireland for the full calendar year of 2011 with the knowledge that CF NBS was introduced midway through that year, in July. The introduction of the CF NBS programme is likely to change the pattern of sweat testing in Ireland, but that impact was unlikely to have been significant within the six months captured in the second half of the study year. The CF NBS programme is estimated to have a sensitivity of greater than 99%, with approximately 0.8 cases missed per annum from 70,000 screened infants. This would result in approximately one case missed every two to three years. As infants are diagnosed with CF in the newborn period, the likelihood of older children having CF will diminish significantly. Our study was performed at a unique point in time, the year CF NBS was introduced. It will be important to assess impact of the NBS on the sweat testing patterns in Ireland. We hypothesize that the number of sweat tests performed annually will reduce significantly over time, and in the future the procedure will be performed in a limited number of centres. These changes may have implications for competency and quality in centres performing fewer sweat tests, and have resource implications for centres playing a more centralized role in a greater catchment area.