Management of Epistaxis – A Single Centre Experience and Economic Considerations

Epistaxis represents the most common ENT emergency and its management has been a focus of audit recently, with consideration given to the associated economic burden. The aim of our study is to evaluate the management of epistaxis in terms of treatments used, duration of stay, recurrence and cost. A retrospective review of hospital inpatient enquiry (HIPE) data from a single secondary referral centre was undertaken during a four year period. Four hundrefd and thirty-four patients were identified. The majority (n= 262, 60.3%) were male and the average age was 64.2 years. The vast majority (n=362, 83.4%) were managed non-operatively. Only 15 patients (3.4%) were managed surgically. The average length of stay was 2.5 days and did not vary greatly between the treatment groups. The recurrence rate was 8.2% (n=36). Approximate costs of packing vs EUA and cautery suggest that packing alone is more economical but more data is needed to fully compare the options.

Epistaxis is defined as acute haemorrhage from the nostril, nasal cavity or nasopharynx. It represents the most common ENT emergency with up to 60% of people experiencing one episode in their lifetime and 6% of these seeking medical attention1. The estimated incidence in the UK is 108/100 000 each year2. There are multiple risk factors associated with epistaxis, and these can be divided into local or systemic. Local causes can include nasal picking, foreign body, septal perforation, rhinitis, sinusitis, topical agents such as intranasal steroids, nasal polyposis or trauma. Systemic causes can include anticoagulation, hypertension, hereditary haemorrhagic telangectasia, haemophilia, platelet dysfunction, leukaemia or liver disease. It can affect any age group. Most studies report a bimodal distribution with an early age peak (age >10 years), the frequency increases from age 20 years onward, with the highest rates in the elderly3. Treatment will depend on the location of the bleed i.e. anterior/posterior based on the arterial supply and location of the bleeding vessel, the level of experience of the treating doctor and availability of equipment4,5. With the advent of new endoscopic surgical techniques, the treatment paradigm is changing6 and it has been a focus of clinical audit in recent years, with consideration given to the associated economic burden. The aim of our study was to evaluate the management of epistaxis in terms of the variety of treatments used, duration of inpatient stay, recurrence rate, associated cost (i.e. hospital stay, nasal packing, cost of surgical intervention) We seek to find the optimal modality for the management of epistaxis taking these factors into consideration.

A retrospective review of hospital inpatient enquiry (HIPE) data from a single secondary referral centre in Ireland during a four year period between 2009 and 2012. All patients with admission diagnosis coded as “epistaxis” were included.

The vast majority (83.4%) of patients were managed non-operatively with packing and/or cautery. These patients were routinely placed on oral antibiotics e.g. co-amoxiclav or clarithromycin if penicillin allergic. Nasal packing was undertaken using either impregnated ribbon gauze with bismuth iodine paraffin paste (BIPP), Rapid Rhino (balloon tamponade), merocel (nasal tampon), or very occasionally Floseal (human thrombin haemostatic matrix) when available. In our centre, silver nitrate and electrocautery are the available options to be performed under local anaesthetic. Conservative management involved the use of naseptin cream (chlorhexidine hydrochloride and neomycin sulphate – for eradication of staphylococci) and/or antibiotics, or simply observation and this was undertaken in 12.9%. Only 15 patients (3.4%) were taken to theatre for examination under anaesthesia (EUA) and nasal cautery. The sphenopalatine artery (SPA) was not ligated as it was not identified as a source of bleeding intra-operatively. One patient required removal of a foreign body and was admitted for observation due to advancing age (82) and co-morbid conditions. All patients were routinely assessed with flexible nasendoscopy to identify the bleeding source and rule out the presence of a lesion as a cause. No such lesions were found during this period. Three patients (0.7%) required blood transfusion due to symptomatic anaemia. The cost per unit of red cells is approximately €250 (correct as of October 2015). These patients were all treated with nasal packing. The average length of stay for all patients with spontaneous epistaxis was 2.5 days with a range of 1 – 28. Length of stay reflected the presumed severity of epistaxis and it varied with treatment undertaken. This is summarised in the chart below: 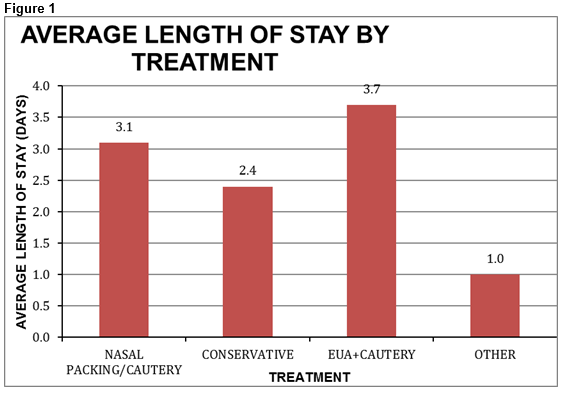 In 2012 in our centre, the average cost for an overnight inpatient stay was €1117. The table below (Table 1) outlines some approximate costs of individual treatments typically used in our centre (figures correct as of May 2015). We used these figures to estimate the cost of the most commonly employed treatments, including average length of stay. Conservative management was the least costly at an approximate cost of €2926.73 per patient. This option would have normally been reserved for those patients with less severe episodes of epistaxis. Three of our most commonly used nasal packing techniques were assessed in terms of their cost and the least costly was Merocel (€3593.99), then Rapid Rhino (€3613.83), then BIPP (€3617.83). Surgical intervention was by far the most costly (€6217.73). This would generally be reserved for patients with profuse, refractory epistaxis. 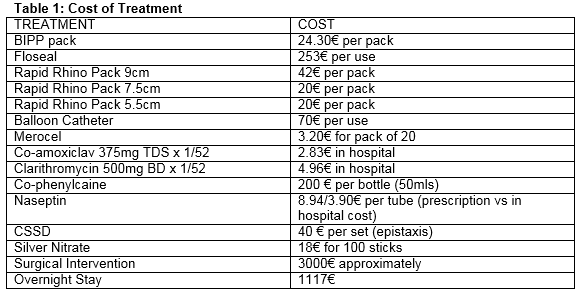 Epistaxis is a common ENT event and represents a significant burden on healthcare resources. The principles of management are to provide safe and durable haemostasis without causing unacceptable discomfort to the patient. There exists a large amount of information on the causes and treatment of epistaxis but few articles assess the economic burden. In our current economic climate and with the HSE predicted to go over budget by €510 million7, it is prudent to review our own clinical practice and reflect on ways we can reduce costs. Regarding epistaxis, we would recommend early identification and control of risk factors such as hypertension8 with prudent use of anticoagulation. The use of anticoagulants has been associated with increased costs and prolonged length of stay9. We hypothesise that patient information regarding first aid measures and avoiding nose picking and aggressive nose blowing will have a positive effect on reducing the need for admission10.   Intranasal vasoconstrictors such as oxymetazoline may be effective in almost 65% of patients, and can be used in conjunction with silver nitrate11.  Most cases of epistaxis occur in the anterior part of the nose, with the bleeding usually arising from the rich arterial anastomoses of the nasal septum (Kiesselbach’s plexus). Posterior epistaxis generally arises from the posterior nasal cavity via branches of the sphenopalatine arteries12. Such bleeding usually occurs behind the posterior portion of the middle turbinate or at the posterior superior roof of the nasal cavity. It is generally accepted that anterior epistaxis can be controlled locally with cauterisation10. The management of posterior epistaxis remains controversial although many studies advocate surgical ligation of the SPA, which was shown in one large retrospective study involving 678 patients13 to be successful in 97% of patients, vs 62% of those patients treated by packing. There was a comparable complication rate. Early SPA ligation (first 24 hours of admission) has been shown in some other Irish centres to significantly reduce length of stay and can reduce costs by almost half (€5905 vs €10,001, P=0.03)14.

The limitations of our study are that our data was collected retrospectively and based on those patients who were admitted only, not those who were treated and discharged. The data was collected from the HIPE system in our centre and there was no distinction between anterior and posterior epistaxis. We were unable to distinguish those patients with sinonasal disease predisposing to epistaxis such as intranasal polyps and septal perforation. These are well-described issue with the use of HIPE data15. However, our study is the first of its kind in Ireland and provides local information regarding the cost of this common problem. It also highlights the need for further multicentre trials regarding the treatment of posterior epistaxis in order to provide homogeneity of care and evidence based treatments for our patients whilst attempting to decrease the economic burden of this common event.