Maternity Ultrasound in the Republic of Ireland 2016; A Review

Antenatal ultrasound, comprising of a dating ultrasound in the late first trimester followed by a fetal anomaly scan, is a recognised and necessary component of good antenatal care. We conducted a telephone survey of all 19 obstetric units to ascertain the status of maternity ultrasound provision in Ireland. Fetal anomaly ultrasound is offered universally to all women in 7/19 (37%) units, selectively to some women in 7/19 (37%) units and not offered at all in the remaining 5/19 (26%) units. Overall ≈ 41,700 (64%) women receive a fetal anomaly ultrasound nationally. Universal first trimester ultrasound, performed in a dedicated ultrasound department by a suitably qualified sonographer, is offered to 47% of women nationally. This study highlights the lack of development in Irish maternity ultrasound services over the last decade. Substantial investment by health care policy makers is urgently needed.

Introduction
Obstetric ultrasound is a recognised and necessary component of good antenatal care1,2. Internationally, the widely accepted minimal schedule for antenatal ultrasound comprises of two examinations; a dating ultrasound in the late first trimester, followed by a fetal anomaly scan, usually performed between 20-22 weeks’ gestation3-5. Routine first trimester ultrasonography is usually performed between the gestational age of 10+0 and 13+6 weeks. This is the most appropriate time point at which to accurately date a pregnancy3, and may have a role to play in reducing the incidence of unnecessary induction of labour for suspected prolonged pregnancy6, 7. In the event of a multiple pregnancy diagnosis this is also the ideal time to accurately assign chorionicity, which is vital to ensure appropriate management6, 8. Some major fetal anomalies are also detectable in the late first trimester6 and when diagnosed can facilitate parental choice with respect to continuing with, or terminating the pregnancy, in jurisdictions where this is legally permissible.

Sonographers performing first trimester ultrasound need to have appropriate training in the use of diagnostic ultrasonography and they also need to maintain clinical competency through ongoing medical educational activities6. Second trimester fetal anomaly ultrasound is routinely recommended by all obstetric policy-makers2-4, 9. If a fetal anomaly is detected, planned delivery of the infant at the right time and in the correct place can be facilitated, thus enabling rapid access to appropriate neonatal intensive care which may ultimately reduce neonatal morbidity and mortality10, 11. Diagnosis can also provide adequate time to psychologically prepare parents for the challenges of the pregnancy, intrapartum, and postnatal period. A timely diagnosis of a lethal fetal anomaly, which is devastating for parents, can allow them time to adjust and make memories with their infant.12, 13 In certain jurisdictions, the detection of a lethal fetal anomaly can also provide parents with the option to continue with the pregnancy or to terminate3.

The fetal anomaly scan is best performed between 20+0 to 22+6 weeks’ gestation as this time point allows the best visualisation of fetal anatomical structures3, 4. This ultrasound requires a high skill level and needs to be performed by an individual with “specialised training for the practice of diagnostic ultrasonography in pregnant women”4. Sonographers performing fetal anomaly ultrasound need to maintain competence by “Continuing Professional Development” and by performing a minimum of 100 ultrasounds per year14. Ultrasound machines used should be of high quality, undergo regular maintenance and should have real time, adjustable acoustic power and freeze frame capability. They should also have the capacity to store and print images4. Fetal anomaly ultrasound should also follow a strict format and minimum requirements have been set by the major obstetric ultrasound professional bodies2,4,14.

Since 2000 the Royal College of Obstetricians and Gynaecologists (RCOG) recommended that all pregnant women should be offered these two ultrasounds for the accurate dating of a pregnancy as well as the diagnosis of fetal anomaly15. This two stage ultrasound approach is also endorsed by the National Institute for Health and Clinical Excellence (NICE) in 20083. In January 2016, the Department of Health in the Republic of Ireland published the National Maternity Strategy which also recommended that all women have “equal access to standardised ultrasound services, to accurately date the pregnancy (and) to assess the fetus for ultrasound diagnosable anomalies as part of a planned Prenatal Fetal Diagnostic Service”16. Previous research reported by Lalor et al in 200717 and Walsh et al in 201318 revealed a large variation in the number and type of ultrasounds provided by the maternity units around Ireland. Recent high-profile media reports, highlighting a lack of diagnosis of lethal fetal anomalies over the last number of years, suggest that availability to fetal anomaly ultrasound remains inconsistent. For these reasons it is appropriate and timely to once again determine the scale of the provision of maternity ultrasound services in the Republic of Ireland.

Methods
A telephone survey of all Irish obstetric units was undertaken in February 2017 by the two lead authors. Respondents were asked to provide verbal answers to standard questions relating to the provision of maternity ultrasound services in their unit for the year 2016. The domains focused on were; first trimester ultrasound, fetal anomaly ultrasound and early pregnancy assessment (EPA) ultrasound. In all cases a senior clinician, either a consultant obstetrician or a lead sonographer was contacted in order to ensure that respondents had a thorough knowledge of the services provided in their unit. Results were analysed using IBM-SPSS Version 22. Percentages are given to the nearest whole percentage point. For the purposes of this study, and based on international guidelines4, 6 these were the definitions used; a routine ultrasound referred to an ultrasound offered universally to all women attending that particular unit at a specific gestational age. A fetal anomaly ultrasound referred to a detailed structural assessment of the fetus, performed by an appropriately trained sonographer14 between 20-22 weeks’ gestation that adhered to a written checklist proforma based upon a recognised internationally accepted guideline such as ISUOG4 or NHS FASP9. This is also sometimes referred to as a standard fetal anomaly ultrasound. A first trimester ultrasound referred to an ultrasound performed by a suitably trained sonographer, before 14 weeks’ gestation where the main purpose was to accurately date the pregnancy6.

Results
In total 100% (n=19) of Irish maternity units were successfully contacted and completed the survey. Approximate annual delivery rates for 2016 were provided to us from each respondent for their respective units and ranged from 1062 to 9186 births with the total number of combined births ≈ 65,500. All 19 units have a dedicated Early Pregnancy Assessment Ultrasound service available. A dedicated maternity ultrasound department is present in 16/19 (84%) of the units. Fetal anomaly ultrasound is offered universally to all women in 7/19 (37%) units, selectively to some women in 7/19 (37%) units and not offered at all in the remaining 5/19 (26%) units (Figure 1). In units offering selective anomaly scanning the variation in percentage of women receiving a scan ranges from 10-42%. Figure 2 illustrates the geographic variation that exists nationally in provision of fetal anomaly ultrasound scans. Overall ≈ 41,700 (64%) women receive a fetal anomaly ultrasound nationally.

Of the 14 units providing some level of anomaly ultrasound, all units perform the scans between 20-22 weeks’ gestation. The time allocated per ultrasound is 20-30 minutes in 7/14 (50%) units and greater than 30 minutes in 6/14 (43%) units. In one unit the respondent was not sure as to how much time was allocated for each anomaly ultrasound. In 6/14 (43%) units verbal information is provided to women undergoing an anomaly ultrasound while both written and verbal information is provided to women in the remaining 8/14 (57%) units. Fetal anomaly ultrasound is performed by a midwife sonographer in 9/14 (62%) units, a radiographer in 1/14 (7%) units, a Fetal Medicine Specialist in 2/14 (14%) units and a combination of these in the remaining 2/14 (14%) units. 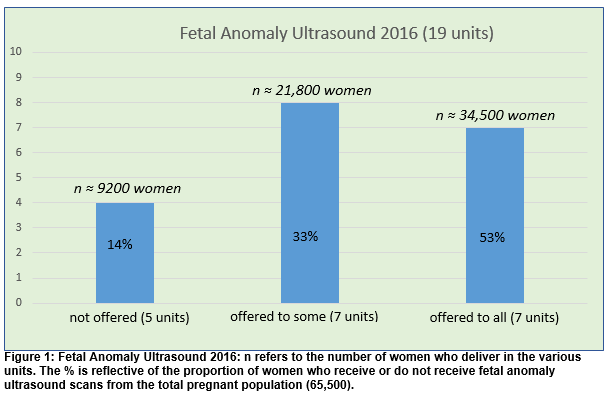 There is some variation around the limited provision of anatomy ultrasounds in the units that do not provide a standard fetal anomaly ultrasound. In one of the units, a nearby larger unit provides 100 ultrasounds per annum, which represents ≈ 7% of their booking population. The clinical indication for these ultrasounds is based on maternal age. Another unit provides a limited anatomical survey to all women between 18-22 weeks’ gestation. Another unit offers 50% of women, based on maternal age and medical/obstetric history, a combined ultrasound at 18-24 weeks’ gestation which dates the pregnancy and identifies some anatomical components but does not adhere to any formal guideline checklist. 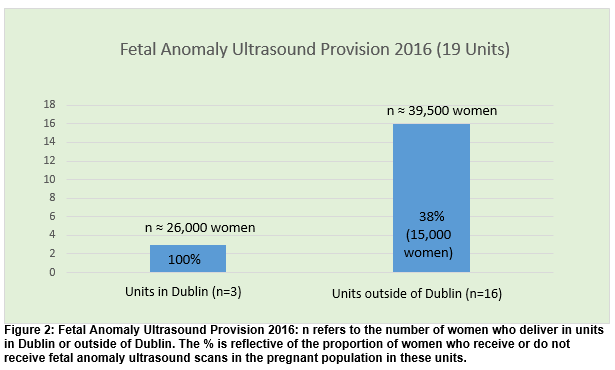 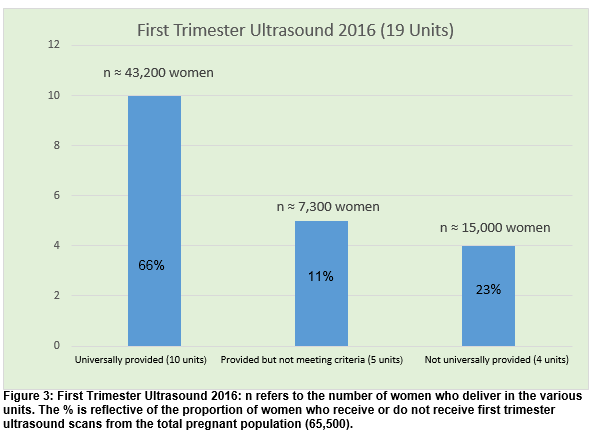 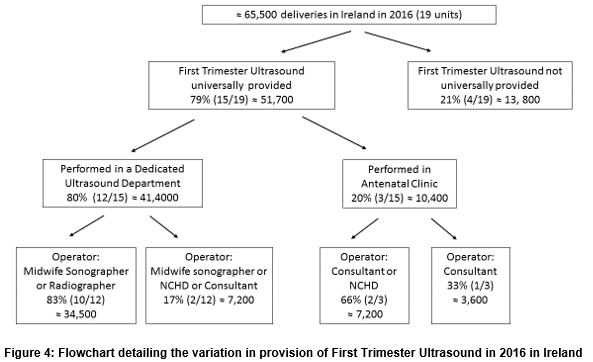 Previous studies have advocated the need for uniform national and local guidelines on the provision of routine maternity ultrasound services in Ireland17,18. While we welcome the publication of the National Maternity Strategy and the other Irish national clinical guidelines recently published that advocate for different types of antenatal ultrasound in specific settings8,16,19-21, we strongly recommend the development and implementation of an Irish guideline on obstetric ultrasound. A national guideline should set out the standard components of the anomaly ultrasound scan, and the optimum gestation for provision, as well as specify the training of sonographers and set requirements for ultrasound machines and image storage. An algorithm describing appropriate referral pathways to fetal medicine expertise in the event of an abnormal finding needs to also be described. International guidelines already exist in this area which can be consulted to expedite development of Irish guidelines. Corcoran22 reported that the introduction of a standardised local practice guideline and appropriately trained sonographers significantly increased the rates of antenatal detection of fetal congenital cardiac disease in Ireland.

It is disappointing to conclude that our study findings reflect those of the previous two national ultrasound surveys (2007, 2012)17, 18 and confirm that there has been no expansion in Irish maternity ultrasound services in the last decade. If we are serious about equity of care and access to specialist services for all Irish women, regardless of geographical location or financial means, there must now be substantial investment by healthcare policymakers. Without recognition of the deficit that currently exists in both the numbers of suitably qualified sonographers as well as in the provision of facilities and equipment, we will be unable to meet one of the fundamental aims of the 2016 National Maternity Strategy – equal access to standardised ultrasound services to every pregnant woman in Ireland.