We sought to compare the weight of patient’s medical records (MRW) to that of standardised surgical risk scoring systems in predicting postoperative hospital stay, morbidity, and mortality in patients with hip fracture. Patients admitted for surgical treatment of a newly diagnosed hip fracture over a 3-month period were enrolled. Patients with documented morbidity or mortality had significantly heavier medical records. The MRW was equivalent to the age-adjusted Charlson co-morbidity index and better than the American Society of Anaesthesiologists physical status score (ASA), the Physiological and Operative Severity Score for the enUmeration of Mortality and Morbidity (POSSUM,) and Portsmouth-POSSUM score (P-POSSUM) in correlation with length of hospital admission, p = .003, 95% CI [.15 to .65]. Using logistic regression analysis MRW was as good as, if not better, than the other scoring systems at predicting postoperative morbidity and 90-day mortality. Medical record weight is as good as, or better than, validated surgical risk scoring methods. Larger, multicentre studies are required to validate its use as a surgical risk prediction tool, and it may in future be supplanted by a digital measure of electronic record size. Given its ease of use and low cost, it could easily be used in trauma units globally.

Clinicians from all fields have always grappled with the risk of perioperative morbidity and mortality when considering management plans for patients, and for decades, clinicians had been trying to develop methods of predicting perioperative morbidity and mortality in patients who are to undergo surgery. A variety of risk stratification systems or scoring systems have become increasingly popular in assessing a patient’s risk for surgery. The American Society of Anesthesiologists physical status score (ASA) is a subjective assessment of physical health and is the most widely used patient risk assessment tool in anaesthesia. Originally developed by Saklad in 19411 and revised from seven to five classes in 19632, numerous retrospective studies have shown a correlation between ASA score and perioperative mortality 3-6. However, it does not describe individual patient risk and cannot account for surgical procedure or individual differences in the postoperative care setting. The ASA scoring system is therefore limited in its ability to predict postoperative complications7, 8. The Charlson co-morbidity index was developed for longitudinal studies in 1987 and adjusted to account for age in 19949,10. It has been validated in predicting mortality in numerous malignancies, renal disease, stroke, intensive care, liver disease and hip fractures 11-17.  Its drawbacks include the fact that it is not specific for surgery, and therefore doesn’t take into consideration the severity of the surgical procedure to be under taken as well as other surgical variables18. The Physiological and Operative Severity Score for the enUmeration of Mortality and Morbidity (POSSUM) scoring system was developed in 1991 in an effort to help predict post-surgical morbidity and mortality19. It initially took into consideration 48 physiological, and 14 operative and postoperative factors, however this was reduced to 12 physiological and 6 operative factors. It was found however that the POSSUM scoring system grossly over-estimated perioperative mortality20. In 1998 the Portsmouth-POSSUM (P-POSSUM) scoring system was developed to better predict mortality21. However, its calculation uses some intra-operative information which in turn makes it difficult to use as a means of assessing perioperative risk in the pre-surgical setting18.

According to Barnett and Moonesinghe, the ideal clinical risk scoring system would be “objective, accurate, economical, simple to perform, based entirely on information available preoperatively, and suitable for patients undergoing both elective and emergency surgery”18. The aim of this study was to compare the weight of a patient’s medical records with established scoring systems in predicting a patient’s length of stay in hospital and perioperative risk of morbidity and mortality. We hypothesised, based on our own experience anecdotally, that medical record weight (MRW) would be just as good as established, complex measures.

Fifty six consecutive patients who had been admitted and undergone surgical fixation for hip fracture were identified from the Hospital Inpatient Enquiry (HIPE). All patients had undergone surgery in the first three months of 2015 and followed for at least 3 months post-surgery, allowing for calculation of a 90-day mortality rate. Patients under 18 years of age, those who had inactive volumes of medical records destroyed or received medical care in another institution without direct correspondence with our institution, were excluded. Those patients that did not have the relevant intra-operative information required to calculate the chosen standardized surgical risk scores were also excluded. Medical notes were reviewed in full. Patient age, gender, side and type of hip fracture, type of surgery and form of anaesthesia used were recorded. Medical complications and in-hospital mortality were noted. Length of stay (LOS) was recorded in days. Postoperative patient mortality was at the 90-day time point for all patients using the National Death Registry.

Pre-operative ASA scores as assigned by the attending anaesthetist were recorded. The Age-adjusted Charlson Co-morbidity Index (ACCI)10, POSSUM19 and P-POSSUM21 morbidity and mortality scores were calculated based on medical record information. A digital scale was used to weigh the medical charts. All volumes were weighed using a calibrated ‘American Weigh Scale PS-25 Digital Scales’. This was recalibrated between each measure using manufacturing grade weights. To allow calculation of the MRW as a predictor we removed all notes relevant to the admission for the hip fractures before weighing. Data are presented as means with standard deviations in parentheses. Pearson correlation and logistic regression analyses were performed to determine the relationship between the various predictive scores and the three outcomes variables. A P value <0.05 was deemed to indicate statistical significance with 95% confidence intervals (C.I.) shown in parentheses.

Fifty-six patients were admitted with a new radiological diagnosis of hip fracture and underwent surgical repair. Of these, 44 patients were deemed eligible and selected for the study. Of the group, 70.5% were female and 29.5% were male. The mean patient age was 77.6 years (11.6). Table 1 shows the measured clinical parameters for the study population. Right sided hip fractures were more common (54.5%). Intra-capsular fractures were observed more frequently than extra-capsular fractures, 65.9% and 34.1% respectively. Fifty-nine point one percent underwent hemi-arthroplasty. Spinal anaesthesia alone or in combination with general anaesthesia was by far the most common form of anaesthesia used (Table 1). 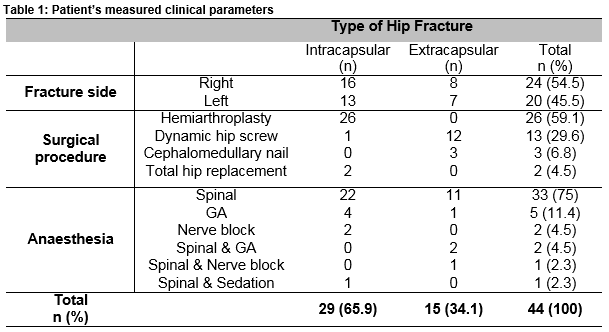 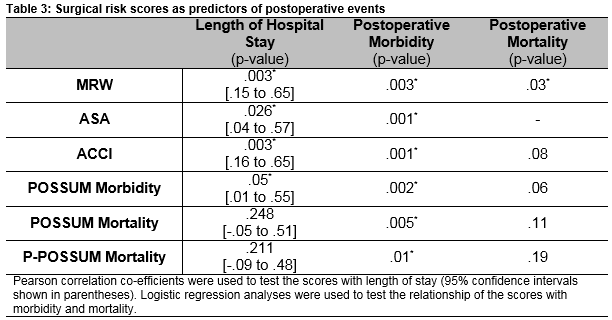 Patient’s developing complications had significantly heavier medical records than those who did not (4.19kg vs. 1.81kg, p = 0.003). All of the surgical risk scoring systems were found to be useful in predicting postoperative morbidity (Table 3). Using logistic regression analysis, MRW was as good as any of the scoring systems in predicting postoperative complications.

Deceased patients had significantly heavier medical records than those who survived (5.26kg vs. 2.53kg, p = 0.03). MRW was the only scoring system that had a statistically significant result while the POSSUM mortality score approached significance. All deceased patients were ASA 3 and logistic regression could not be determined.

While it may be argued that patients with large, heavy medical records are more likely to have more co-morbidities than those with small, light charts, no one has sought to definitively study medical record weight as a method of stratifying surgical risk or compare it to other validated surgical risk scoring systems.

Using the weight of patient’s medical records as a primary tool for stratifying surgical risk confers many benefits. It is simple, patient specific, and has fully reproducible results that are available to the clinician pre-operatively, indeed on admission to hospital, if clerical staff are efficient at retrieving the necessary volumes of notes.

While all of the tested surgical scoring methods have been validated and shown to be useful in predicting perioperative morbidity and mortality, each of them have a number of drawbacks. The ASA’s inability to describe individual risk as well as the wide variation in assigned ASA score by differing anaesthetists has questioned its use as a reproducible method of stratifying patient’s surgical risk22. The ACCI has received criticism for not taking surgery type, severity or other surgical variables into account18. The POSSUM score was found to grossly over-estimate mortality20 while both POSSUM and P-POSSUM scores require intra-operative information, limiting their use in the pre-surgical setting18.

We discovered that the MRW was also faster to calculate than any of the other surgical risk scores tested (anecdotally at least – this was not a recorded measure of the current study). Calculation of the ASA and ACCI typically requires a number of minutes to obtain the patient’s medical history and make an accurate clinical assessment. POSSUM and P-POSSUM scores take even longer to calculate as they rely on serology results and intra-operative events. In contrast, we found that calculating the MRW only took a few seconds. We acknowledge that finding calibrated weighing scales may cause a delay as may the retrieval of the medical records from storage, however these factors are unlikely to unduly influence the time as much as some of the aforementioned variables.

Accurate prediction of LOS is a useful tool in discharge planning. MRW has shown it can predict the ‘long stayer’ and could be used by the medical team, rehabilitation service and social work team in identifying those patients who are more likely to be resource intense. This is a particularly valuable benefit in an under-pressure health care system such as the one we are employed in.

Using MRW as the primary method of stratifying surgical risk could translate to a significant reduction in the need for pre-operative assessment clinics although MRW would need to be validated in an elective setting. As well as a potential reduction in ward-based overtime hours, these positives may lead to healthcare savings.

We acknowledge, as with any study some drawbacks. The study was limited to hip fracture patients that were admitted on an emergency surgical basis. In comparison to elective joint replacement, patients in the emergency setting are typically frailer with confounding co-morbidities that may be poorly managed in the community, and have not been optimised pre-operatively. Such patients are more likely to have perioperative complications than those elective orthopaedic patients and additional work is needed to validate the MRW in other patient cohorts.

Going forth our findings may not be applicable to future surgical practices as more and more healthcare services and patient medical records become computerised. However, it is reasonable to suggest that patients with more co-morbidities and consequently higher surgical risks would similarly have larger digital files reflected by a larger megabyte count.

MRW is a quick, simple, accurate, economical and objective method of predicting a patient’s length of hospital stay and stratifying patient’s morbidity and mortality risk pre-operatively in a hip fracture population. It confers a ‘common sense’, or ‘number 8 fencing wire’, approach to medicine often confounded and unnecessarily complicated by facts, figures and formulas23. It empowers the physician’s clinical judgement in estimating patient risk, a skill that has been overhauled in an age dominated by advanced testing, better treatments and ever increasing public expectation. Consideration should be given to testing the applicability of MRW to other patient cohorts and assess the economic benefits of using this measure.