MELAS (Mitochondrial Encephalomyopathy, Lactic Acidosis, Stroke) - a Diagnosis Not to be Missed

MELAS is a rare mitochondrial disorder. We report two cases in Irish males where the characteristics were evident, but the diagnosis not made for a considerable period of time. In one of the cases the symptoms were presumed secondary to prematurity. In the other the symptoms were presumed secondary to epilepsy and he had three respiratory arrests secondary to benzodiazepine administration. This report wishes to highlight MELAS as a differential diagnosis in paediatric patients who present with stroke.

MELAS is a progressive neurodegenerative disorder affecting multiple organ systems, especially those with high energy oxidation metabolism like muscle, brain, eye and heart. It is due to a point mutation in mitochondrial DNA which is maternally inherited1. Presenting features include developmental delay and stroke-like episodes. Other features include hearing loss, cardiomyopathy, short stature and fatigue2.There is no curative treatment. The disease remains progressive and fatal.

An ex-premature male, born at 30 weeks gestation. At age 14 months, he had global developmental delay and bilateral sensorineural hearing loss, but was attending mainstream school with a special needs assistant. Aged 16, he presented with sudden onset confusion, headache, left sided weakness and visual loss. He regained some vision and use of his left side and was discharged. One week later he presented with right sided weakness and was re-admitted. He had 3 seizures on the night of his admission. MRI showed chronic and acute CVA (Figure 1). The combination of learning difficulties, deafness and stroke-like episodes made MELAS likely. Blood and urine DNA samples sent for the m.3243A>G (MELAS) mutation identified the mutation at a level of 59% heteroplasmy in blood and 95% heteroplasmy in urine. Unfortunately he exhibits significant residual dysphasia and reduced cognition and is unable to continue at mainstream school. 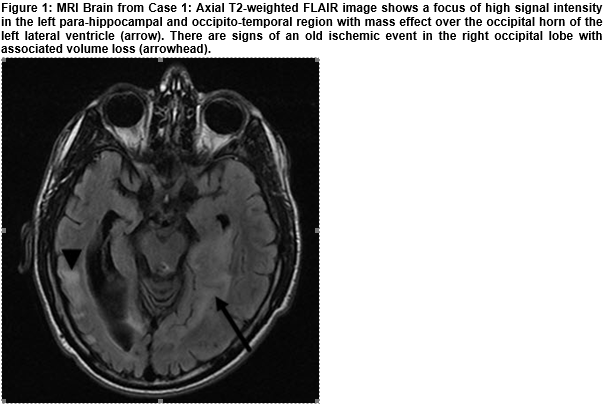 A 3-year-old male with global developmental delay. At age 9, he presented with drowsiness and left sided hemiplegia. Three months later, he presented with drowsiness and right-sided hemiplegia. A presumed diagnosis of subclinical status epilepticus was made. He was administered intravenous midazolam and subsequently had a respiratory arrest. He was presumed to have seizures and commenced on Levetiracetam. Two months later he re-presented with headache and left-sided hemiplegia and administered intravenous Lorazepam which resulted in respiratory arrest. The following month he had tonic-clonic seizures, was administered Diazepam per rectum and had a third respiratory arrest requiring his third intubation, ventilation and transfer to PICU. At this time his venous blood gas showed lactic acidosis (pH 7.16, Lactate10.3). The combination of encephalopathy, lactic acidosis and stroke-like episodes made the diagnosis of MELAS likely. Muscle biopsy showed ragged red fibres(Figure 2). 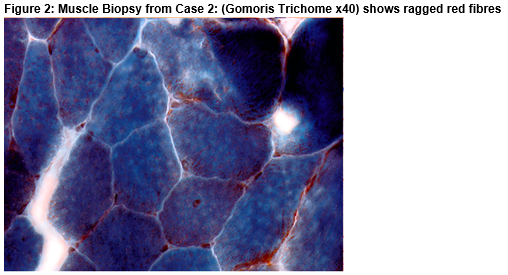 Mitochondrial disorders comprise a heterogeneous group of disorders, of which MELAS is rare. The most common disease-causing mtDA mutation in MELAS is m.3243A>G, found in80% of patients3 as in case 1. Recent population-based studies suggest that the carrier rate of this mutation is 1 in 4004.

Both patients developed stroke-like episodes, a hallmark of MELAS. These are thought to represent metabolic strokes due to deficiency of adenosine triphosphatase, increased lactic acid production, mitochondrial angiopathy, or changes in nitric oxide metabolism5. Case 2 was initially diagnosed with epilepsy, which is strongly associated with stroke-like episodes, though sodium valproate is contraindicated in mitochondrial disorders as it exacerbates seizures6. It is important that the distinction between seizures and stroke is made: case 2 attended three times with alternating hemiplegia, and as a result of benzodiazepine administration, suffered 3 respiratory arrests. This extreme reaction to benzodiazepines is rare, and not reported in the literature.

In addition to stroke-like episodes, both cases had a background of developmental delay and macrocephaly, which were assigned alternate diagnoses. In the largest cohort study of MELAS patients with the m.3243A>G mutation to date, the authors suggested that diagnoses could be considered in patients with 3 or more of the following: developmental delay, deafness, cardiomyopathy, epilepsy, migraine, diabetes mellitus, gastrointestinal disturbance and retinopathy7. L-Arginine during stroke-like episodes can reduce cerebral damage8. Algorithms for diagnosis in paediatric patients have been suggested9. It is important to reach a diagnosis early as juvenile-onset cases can rapidly decline and have earlier mortality(median age from onset to death 6.4years in juvenile compared with 10.2years in adult onset)10. Repeated seizures cause ventricular dilatation, cerebral atrophy and basal ganglia calcification. There is cognitive decline and debilitating myopathy. The clinical course can rapidly decline, leading to profound disability and premature death. Early consideration of MELAS in a patient with stroke can reduce morbidity and improve quality of life.

The authors do not have any conflict of interest to disclose