We conducted a retrospective postal questionnaire-based study to assess the effectiveness and patient experience of minimally invasive treatments for menorrhagia by performing a two- to five-year follow up of patient symptoms. Questionnaires were distributed to 111 and 117 women following thermal balloon endometrial ablation (TBEA) and levonorgestrel intrauterine system (LNG-IUS), with response rates of 58.5% and 43.6% respectively. Sanitary pad use during the heaviest day of bleeding reduced by 8.4 and 5.2 pads in the TBEA and LNG-IUS groups respectively (p<0.05). An improvement in patients’ quality of life (QOL) score exceeding 10 points was found in 79% and 61% in the TBEA and LNG-IUS groups respectively. Patient satisfaction (PS) improved in all areas, more so regarding participation in social activities in the TBEA group (p<0.05). Women undergoing TBEA would recommend the procedure to other women in 95%, and 93% in the LNG-IUS group. TBEA and LNG-IUS are highly acceptable management options for the treatment of menorrhagia, with improvement in QOL, PS and menstrual blood loss.

Introduction
Menorrhagia is a common presenting complaint in gynaecology, with up to 30% of women of reproductive age being affected1. It is defined objectively as excessive menstrual loss of greater than 80ml per period, or subjectively as heavy or prolonged menstrual bleeding affecting one’s quality of life. Menorrhagia accounts for 12% of referrals to gynaecology units2. The Somerset morbidity project calculated the prevalence of menorrhagia in women aged 30-49 years to be 25.8 per 1000 women per year, demonstrating that it comprises a large part of the primary care workload3. Failure of medical management in the treatment of menorrhagia usually prompts the use of minimally invasive treatments including thermal balloon endometrial ablation (TBEA), levonorgestrel intrauterine system (LNG-IUS) insertion and hysteroscopic myomectomy where applicable. TBEA devices act by transmitting heat through the membrane of a flexible balloon which has been inflated with fluid, allowing close apposition to the endometrium. This causes partial or complete destruction of the basal layer of endometrium. The procedure is not contraceptive and pregnancy is strongly discouraged following this treatment due to a risk of obstetric complications. TBEA treatment causes amenorrhoea or hypomenorrhoea in up to 83% of patients at three to nine-month follow-up, with patient satisfaction rates of up to 85%4. The LNG-IUS was first approved for use in the USA in 20005. Licensed for 5 years continuous use, the LNG-IUS releases 20mcg of levonorgestrel daily causing the endometrium to become unresponsive to the proliferative effect of ovarian oestrogen, resulting in endometrial thinning. It has consistently been shown to improve patient quality of life (QOL), as well as improve menorrhagia6.

There are few head-to-head studies published on long-term follow-up of these treatments. A recent meta-analysis identified seven studies which compared LNG-IUS and TBEA up to twenty-four months suggested that the LNG-IUS may be more effective and affordable than TBA as a long-term treatment, but further studies were needed to assess outcome measures7. In another study, five-year follow-up of 58 patients was performed showing LNG-IUS to be associated with higher efficacy and satisfaction than TBEA8. Our study aims to add new information to the literature regarding longer-term outcomes following minimally-invasive treatments for menorrhagia.

Methods
We conducted a retrospective postal questionnaire-based study between August and December 2013. Women who had either LNG-IUS or TBEA treatment for menorrhagia between June 2008 and June 2011 in our unit were identified via the hospital patient information management system (PIMS). All procedures were concurrently performed with examination under anaesthesia, hysteroscopy and dilatation and curettage. Two different balloon devices were used in our unit during the study period; Thermablate (Idoman Teoranta, Co Mayo, Ireland) and Thermachoice (Gynecare Inc., CA, USA). It was not possible to correlate the type of TBEA used with patient outcomes. The ablation device used was not recorded in the hospital database, thus this information was not available to the researchers. The LNG-IUS exclusively used in the hospital at the time was Mirena (Schering Co., Turku, Finland). A questionnaire was devised to assess patient demographics, pre- and post-procedure objective menstrual blood loss (OMBL), post-procedure complications, the need for further treatment of menorrhagia and contraceptive use. OMBL was evaluated by assessing pad and/or tampon counts during the heaviest day of bleeding. Health-related QOL was evaluated using the validated menorrhagia multi-attribute utility scale (MMAUS)9. Satisfaction with treatment was graded on a 100-point scale and patients’ likelihood to recommend their treatment to other women was assessed.

Ethical approval was received from the Clinical Ethics and Research Committee of the Cork Teaching Hospitals. All data was analysed using PASW Statistics. Following a pilot phase, postal questionnaires were distributed with a consent form and information leaflet and stamped addressed envelope for return of the questionnaire. Reminder letters were sent one month following the initial letter.

Results
A total of 228 women had either endometrial ablation or LNG-IUS treatment during the study period. Questionnaires were distributed to 111 and 117 women following TBEA and LNG-IUS, with response rates of 58.5% (n=65) and 43.6% (n=51) respectively. Those who had TBEA treatment were more likely to respond (p<0.05) to the questionnaire. Table 1 demonstrates the demographic features of these groups. 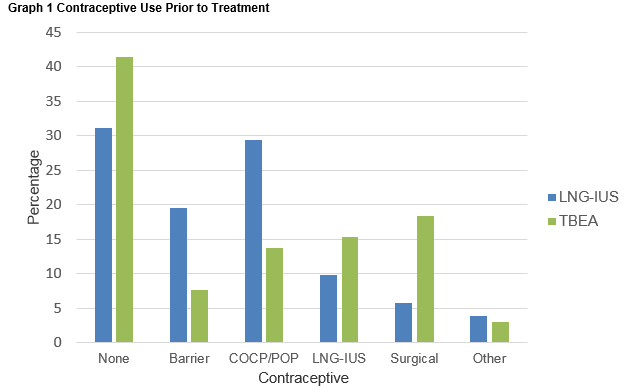 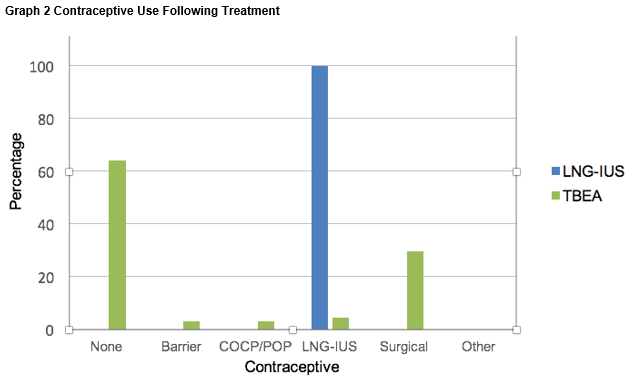 Dysmenorrhoea scores improved to a greater extent in the LNG-IUS group than the TBEA group, however this finding was not statistically significant (p= 0.190).

The majority of women demonstrated an improvement in QOL, with only three percent (n=2) having a decrease in QOL following TBEA and 7.8% (n=4) of the LNG-IUS cohort. An improvement in QOL score exceeding 10 points was found in 79% in the TBEA group and 61% in the LNG-IUS group (p=0.485). Changes in the quality of life scores for TBEA and LNG-IUS are shown in Graph 3.

There was a non-significant improvement in patient satisfaction in both groups the areas of practical difficulties, physical health and psychological health. Improvement in participation in social activities was significantly greater in the TBEA than the LNG-IUS group (p<0.05). TBEA and LNG-IUS were recommended by 95% and 93% of women respectively.

Discussion
Patient satisfaction was high for both treatment modalities, indicating good acceptability and efficacy. OMBL improved in both groups and QOL scores improved by 16% in the LNG-IUS group and 33% in the TBEA group. Greater improvement in dysmenorrhoea scores in the LNG-IUS group may be a result of concomitant treatment of adenomyosis, commonly found in women with menorrhagia. Shorter-term studies have demonstrated similar effectiveness of both devices for up to one year10,11,12. Although longer-term data in larger cohorts is limited, similar results are demonstrated11. We provide information in this study that is specific to an Irish population which we hope will inform practice in this country. The difference in age in women undergoing the two different treatments was not statistically significant, though women undergoing TBEA were on average just over two years older than those having LNG-IUS. This age difference may have been clinically significant however, with women in the TBEA group likely to reach menopause earlier than those in the LNG-IUS group, thus affecting reported menstrual blood loss. It is noted in the literature that up to 40% of women having TBEA under the age of forty will require a hysterectomy within five years13. Caution should be exercised in extrapolating findings from this study in terms of the success of TBEA to younger women as they are likely to have a lower success rate with this treatment.

Worryingly, post-procedural contraceptive use in women who underwent TBEA was low; 64.1% of women who underwent TBEA were not using any form of contraception following treatment, with only 34.2% of women using either permanent contraception or long-acting reliable contraceptives. This is concerning as pregnancies following TBEA are associated with increased risk of adverse outcome such as pregnancy loss and disorders of placental implantation14,15. It is crucial that during pre-procedural counselling of a women, written and verbal information should be provided to explain these risks. It is the clinicians’ responsibility to ensure that long-term, highly reliable contraception has been recommended when considering this procedure. Our study had a number of limitations. As women were retrospectively sampled several years after their treatment, there is a risk of recall bias regarding their pre-procedure QOL, PS and OMBL. This could be avoided in future studies by prospectively assessing women undergoing these treatments, and would allow more precise interval follow-up for a more objective analysis of the success of treatment. The response rate for our postal questionnaire was low, and findings may not be representative of the entire group of women undergoing these treatments during the study period. Finally, as women in both study cohorts were in their later reproductive years, the onset of the menopause could coincidentally have affected their reporting of OMBL and contraceptive use.

It is clear that both TBEA and LNG-IUS have revolutionised the management of menorrhagia for women. They are both acceptable, readily available and efficacious treatments, which have greatly improved womens’ QOL. Notwithstanding the retrospective nature of the study and a relatively low response rate, our study has added to the literature base on minimal access treatments for menorrhagia, specifically demonstrating successful long-term follow-up over 2-5 years in women who have had these treatment techniques performed, and has assessed a larger number of patients than some previous studies.

Conflict of Interest
The authors report no conflicts of interest.