Introduction
Merkel cell carcinoma (MCC) is a rare cutaneous tumour that is clinically aggressive with a high local, regional, and distant metastatic potential.

Cases
Three male patients presented to University Hospital Limerick (UHL) in 2015 with cutaneous lesions of the thorax, buttock and forearm. Once MCC was confirmed, management included surgical wide local excision (WLE) with regional lymph node dissection followed by adjuvant radiotherapy. One patient is in remission. The second has residual locoregional lymph node disease and is undergoing annual CT surveillance. The third had distant metastatic disease and is deceased from an unrelated condition.

Discussion
This case series highlights the presentation and management of MCC. We also discus relevant guidelines. The management of MCC is complex and there is a need to establish local or national databases to identify and monitor patients with MCC.

Merkel cell carcinomas (MCC) are rare cutaneous neuroendocrine neoplasms. These are clinically aggressive and have a relatively high local, regional, and distant metastatic potential. They occur most commonly in Caucasian (94 %), males, with a mean age of 72 years. There is an increased incidence amongst people over 65 years of age.(1)

MCC was first described in 1875 by the German histopathologist, Friedrich Sigmund Merkel. Upon microscopy the unique tactile cells are epidermal, nondendritic, nonkeratinizing and are thought to arise from the neural crest. Merkel cells exist as primary neural cells found within the basal layer of the epidermis. However, the described origin from the neural crest is controversial and recently other investigators have suggested its derivation from epidermal keratinocytes instead.(2, 3)

As of 1 January 2016, the population of Ireland was estimated to be 4 696 141 people (6). The population of the province of Munster is 1,280,000 in 2016 (7), in this setting we have seen three Caucasian males present with this rare cancer at the University Hospital Limerick (UHL) in one year. In this report we review the presentation, management and outcomes of these three patients. We also summarize the literature on MCC. Verbal consent was obtained from each patient for their participation in this case series.

First Case:
A 77 year old Caucasian male, presented to the surgical clinic with a two month history of a right chest wall lesion. He did not have a history of significant sun exposure or foreign travel.

On examination, a 15 millimeter (mm) nodular skin lesion was found with a surrounding area of psoriasis.

The lesion was excised under local anesthetic with 2mm margins and sent for evaluation. Histopathology revealed an ulcerated malignant tumor extending into the subcutaneous layer with lymphovascular invasion. A formal diagnosis of MCC was made after further staining.

For staging, a computerized axial tomography (CT) scan of the neck, thorax, abdomen, and pelvis (TAP) was performed. This revealed a 24mm lymph node (LN) in the right axilla. After discussion by the regional multidisciplinary team (MDT), wide local excision (WLE) of the right chest wall and level III right axially dissection was performed. The histopathology and staging revealed a Stage II MCC (T2 N1 M0). He was referred for systemic adjuvant chemotherapy and local/axillary radiation. The patient tolerated adjuvant therapy well, however developed moderate lymphedema of the right arm which was managed conservatively. At six months a repeat CT scan showed no evidence of recurrence.

Second Case:
A 54-year-old Caucasian male with a 20year smoking history presented to the surgical clinic with a subcutaneous mass in the right buttock. This was first noticed six months ago and had been increasing in size and tenderness since then. Examination revealed a 8x10 cm mass in the right buttock which was firm and displayed purplish discolouration. Further examination revealed bilateral prominent inguinal LN.

Intra-operatively the mass was approximately 10 cm in maximal dimension and excised with a 2cm margin. Ilio-ingunial LN dissection was performed via the retroperitoneal approach and nodes adherent to the iliac vein were encountered and excised. The spermatic cord was also removed en-bloc. Histology revealed 4/9 LN to be positive for malignant invasion. Subsequent CT TAP revealed residual disease around the distal right external iliac artery. He was staged at T2 N2b M0, Stage III MCC and referred for adjuvant chemotherapy. Surveillance includes follow up CT every 6months for 2 years then annually. After one year of surgery the suspicious right external iliac artery node remains unchanged in size afterward.

Third Case:
A 68 year old Caucasian male with multiple sclerosis (MS) presented to the dermatology clinic with a large nodule on the right forearm (figure-a). A WLE performed by the dermatologist revealed MCC with clear radial margins but lymphovascular invasion at the deep margin. He was then referred to the surgical service for further management.

Figure A: Case 3 lesion on the right forearm. 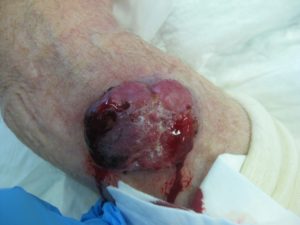 The patient was wheel chair bound secondary to MS with limited function of the right forearm. Ultrasound of the right axilla showed an enlarged axillary LN and a CT TAP revealed enlargement of right axillary, sub-pectoral, internal mammary nodes. After discussion at MDT and with the patient a palliative right forearm wide local excision and level III axially node dissection was performed. Intra-operatively, a satellite lesion was noted superomedially to the original lesion and was excised. Axillary adenopathy was markedly worse than initially suggested by radiological investigation. The disease encompassed and encased the thoraco-dorsal pedicle within the axilla and required en-bloc resection.

Post-operative recovery was uneventful and the patient was commenced on radiation therapy to the right axilla. He was deemed unsuitable for any chemotherapeutic intervention. Two months later he developed recurrence at the primary excision site which was not amenable to radiation therapy. Further surgical intervention involving WLE and split thickness skin graft (STSG) coverage was performed without event. The patient presented after one month with severe sepsis secondary to a respiratory tract infection and unfortunately passed away on the fifth day of admission.

Table 1 summarizes the three cases with their demographics and disease status. 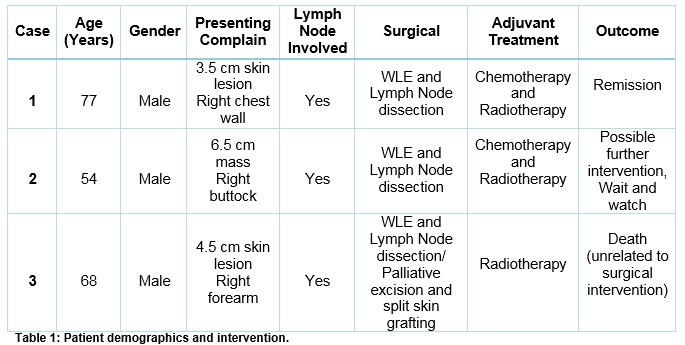 The case series demonstrates correlation with the available literature showing that MCC is predominantly found in Caucasian males(1). The mean age of patients in our cohort was 66 years (54-77) while stated literature places it at 74 years (1). A study from Spain showed 33 cases of MCC over an eight year period from 1994 to 2012. This accounted for 0.2% of all Non Melanoma Skin Cancers (NMSC) patients. Of these, 17 were men (51.5%) and 16 women (48.5%), with a median age at diagnosis of 76 and 81 respectively (8). At UHL we have seen three cases in the year 2015. While this incidence seems high we are unable to conclude that this is significant.

While most cases present on sun-exposed areas, it is important to note that this neoplasm may present in areas of minimal sun exposure. Incidence of disease, on the head and neck accounts for approximately 50% of cases, followed by in decreasing order the extremities, trunk, and buttock(3). In our series lesions were found on less sun-exposed areas of the trunk, forearm and buttock.

A retrospective study of 85 cases of MCC showed that surgery remains the primary modality for treatment and adjuvant radiation therapy +/- systemic chemotherapy reduces local recurrence.(9) Standard of surgical care for MCC has traditionally been WLE and at early stages surgery alone may be sufficient. (10-12) An Italian study in 2009 showed an 80%, 5-year disease specific survival rate when lymph nodes were pathologically negative, which dropped to 58%, when regional nodal metastases were present. (13) In our series sentinel lymph node biopsy (SLNB) was not an adequate step for prognosis as all three patients had disease present in regional lymph nodes on radiological investigation. However, where lymph node involvement is not evident, studies have shown the benefit of SLNB in management.(14, 15). The extent of resection has been controversial in the past. Prior studies showed a need for greater than 3 cm margins for the reduction of local recurrence (16). Some studies have shown no association with margins and recurrence rates (17). A study spanning over 27 years involving 102 patients showed no association with margins (18). Given the discrepancy in literature, margins of 2–3 cm wide and 2cm deep are now deemed acceptable by the National Comprehensive Cancer Network (NCCN) guidelines(19).

Postsurgical adjuvant radiation is indicated and shown to improve outcomes, therefore recommended by the NCCN guidelines(19). A multicentre prospective randomized study performed in 2012 by Jouary et al(20) found that adjuvant radiation significantly reduced the probability of regional recurrence but did not affect overall survival. Other studies have also shown a decrease in recurrence rate with adjuvant radiation therapy (21, 22). The role of chemotherapy however, still remains unclear and less commonly used. It may have a role in advanced MCC and for palliative therapy.

Less than a decade ago, Merkel cell polyomavirus (MCPyV) was linked to the development of Merkel cell carcinoma (23). MCPyV is also an abundant virus detected on healthy human skin, suggesting that its infection is widespread in the general population (24). Studies have also revealed that exposure to the virus occurs in 80% or more of the general population. A strong association of MCC development with immunosuppression suggests a viral causative link. This advance has helped to tailor possible immune mediated treatment. In a multicentre, phase 2, non-controlled study patients with MCC who had not received any previous systemic therapy were given pembrolizumab (anti-PD-1). The results of this study demonstrated a response rate of 56% with first-line anti PD-1 therapy in patients with advanced MCC.(25)

To adequately manage MCC in the population there is a strong need for local and national databases specific to MCC. This database will offer patients the best treatment modality, and monitor progress. It would enable researchers to audit cases to better understand local epidemiology and therapeutic changes.

This case series highlights a rare carcinoma presenting in a small population in Limerick, Ireland. It shows that MCC may occur at non sun-exposed sites as well. We have also highlighted the management strategies including recent advances. This article puts forward the need for a national database for the non-melanoma skin cancers.