We present the case of a patient with severe methaemoglobinaemia secondary to “poppers”. She presented with decreased level of consciousness and cyanosis. A methaemoglobin level was not available prior to treatment but the patient responded well and the diagnosis was confirmed afterwards

Case Report
A 46-year-old female presented to ED by ambulance after she was found unresponsive. In transit she was pink but became profoundly cyanosed on arrival. Her SpO2 was 74% on 100% oxygen. She was tachycardic (139BPM) and hypotensive (88/43mmHg) with a GCS of 9 (E4, V2, M3). She had marked central and peripheral cyanosis. Methaemoglobinaemia was suspected and a VBG was sent. The sample had a chocolate brown appearance. The blood gas analyser was unable to provide a value for either methaemoglobin or oxyhaemoglobin levels but did demonstrate a metabolic acidosis. An ABG was performed which revealed pO2 of 63 (table 1), however a methaemoglobin level was still not available. Despite repeating the analysis on other analysers none would display a value for methaemoglobin. 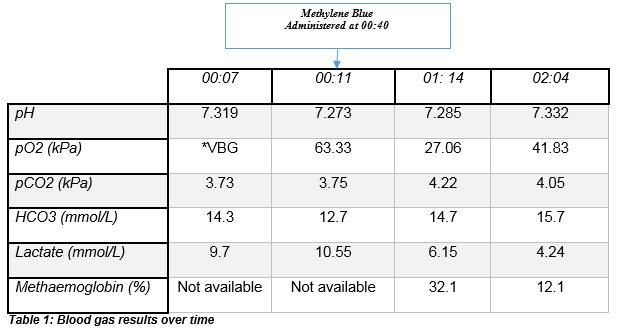 A clinical diagnosis of methaemoglobinaemia was made and she was treated with 1mg/kg of intravenous methylene blue (methylthionium chloride). Shortly after commencing treatment she became less cyanotic and more alert. She disclosed that she had ingested a vial of “poppers”. A repeat ABG was taken thirty minutes later which showed an improved pH and a methaemoglobin level of 32% (table 1). She recovered well and was discharged later that day.

Discussion
Volatile nitrites or “poppers” are a heterogeneous group including amyl, alkyl, butyl and isobutyl nitrite4. They are popular both as club drugs and chemsex agents. They are commonly inhaled; oral ingestion is associated with a higher incidence of toxicity1.

Methaemoglobinaemia is a rare but potentially fatal illness. Certain clinical features should alert the physician to the possibility of methaemoglobinaemia (Table 2). As well as these symptoms, other cues include chocolate coloured blood, cyanosis which does not improve with oxygen therapy and low Sp02 despite a normal or high pO26. A saturation gap can be calculated by subtracting the SpO2 from the SaO2 - a difference of greater than 5% is a significant indicator of methaemoglobinaemia5,6. Although not widely available, co-oximetry is preferred to pulse oximetry as the latter is unreliable in methaemoglobinaemia3,5.

Treatment of asymptomatic patients with low levels of methaemoglobinaemia is with oxygen1,7. Methylene blue is used in more serious cases. It acts as a cofactor for the reduction of ferric haem to ferrous1,2. It is indicated for those with a methaemoglobin level of greater than 20% in symptomatic patients or greater than 30% regardless of symptoms3. Patient factors such as acidosis, end organ dysfunction, pre-existing anaemia and other comorbidities may indicate a need for treatment at lower levels. The dose is 1-2mg/kg and repeat doses may be required. At high doses methylene blue can itself precipitate methaemoglobinaemia and it is contraindicated in G6PD deficiency6,8. Other treatments proposed include ascorbic acid; hyperbaric oxygen; exchange transfusion; and N-acetylcysteine6,8.

Conflict Of Interest
The authors of this case report had no conflict of interest.