CT Colonography was first introduced to Ireland in 1999. Our aim of this study is to review current CT Colonography practices in the Republic of Ireland. A questionnaire on CT Colonography practice was sent to all non-maternity adult radiology departments in the Republic of Ireland with a CT scanner. The results are interpreted in the context of the recommendations on CT Colonography quality standards as published by the European Society of Gastrointestinal and Abdominal Radiology (ESGAR) consensus statement in the journal of European Radiology in 2013. Thirty centres provide CT Colonography; 21 of which responded (70%). Each centre performs median 90 studies per year; the majority follow accepted patient preparation and image acquisition protocols. Seventy-six percent of the centres repsonded that the majority of patients imaged are symptomatic. Of the 51 consultant radiologists reading CT Colonography, 37 (73%) have attended a CT Colonography course. In 17 (81%) of the centres the studies are single read although 81% of the centres have access to a second radiologist’s opinion. Fourteen (67%) of the centres reported limited access to CT scanner time as the major limiting factor to expanding their service. CT Colonography is widely available in Ireland and is largely performed in accordance with European recommendations.

In Ireland, colorectal cancer is the second most common newly diagnosed cancer in both men and women, excluding non-melanomatous skin cancer, occurring in over 2,500 patients per year. It was the second and third most common cause of cancer death in men and women respectively in 20131. Computed tomography (CT) Colonography is a relatively new radiologic technique for imaging the colon which was first described in 19942. It is a minimally invasive examination of the colon and rectum designed to evaluate for colorectal polyps and neoplams. Since its introduction it has been established as the optimal imaging test for assessing the colon, replacing the barium enema3. In the Republic of Ireland, it was first introduced in 1999 and its use and availability has evolved and increased since then. A national survey of CT Colonography practice in the UK has previously been performed but this type of survey had not yet been undertaken in Ireland4,5,6. The aim of this survey is to review the performance and development of CT Colonography in the Republic of Ireland, review changes in bowel imaging practice that have occurred since its introduction, review techniques being used and to explore factors which may limit greater dissemination of the test throughout the country. The results are interpreted in the context of the recommendations on CT Colonography quality standards as recently published by the European Society of Gastrointestinal and Abdominal Radiology (ESGAR) consensus statement, in the journal of European Radiology in 20137.

The questionnaire was sent to all 45 adult, non-maternity centres who have a CT scanner in the Republic of Ireland. Responses were received from 27 centres, 21 of which provide a CT Colonography service and 6 who do not. The 18 centres who did not respond were contacted by telephone to enquire if they offer CT Colonography service. There are a total of 30 centres offering CT Colonography and 21 of these (70%) responded to our questionnaire. The median length of time CT Colonography has been provided in the 21 centres is 5 years (interquartile range 3.6 – 8 years). The median number of CT Colonography examinations performed per year is 90 (interquartile range 50 – 169). Four of the 21 centres are performing between 126 and 175 per year and 4 centres are performing between 201 and Two hundred and seventy-five (Figure 1). 16 (76%) of the centres reported that most of their patients are symptomatic. Almost half of the centres reported that the majority (76-99%) of their patients are referred following an incomplete full colonoscopy which was performed to investigate lower gastrointestinal symptoms. The techniques used across the centres are similar with 16 (76%) using faecal tagging and an automated carbon dioxide insufflator.  Twelve (57%) routinely use IV hyoscine butylbromide (Buscopan) as an antispasmodic agent for most of their patients. The majority (81%) of centres perform dual positioning routinely. Practice regarding the use of intravenous contrast varied significantly; 9 of the 21 centres use it rarely (in ≤15% of CT Colonography examinations) and 8 of the 21 centres use it in the majority of patients (≥90% of examinations). 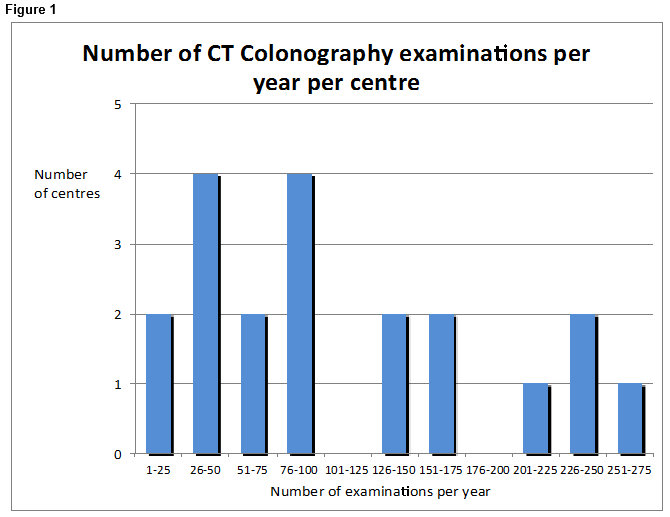 CT Colonography has been in use in the Republic of Ireland since 1999 and is now widely available in 30 centres across the country with over 2,000 examinations being performed per year. There are 4 centres performing relatively high volumes of CT Colonography (>200 per year). CT Colonography has largely replaced the more traditional method of imaging the colon, namely the barium enema, in most centres for diagnostic colorectal imaging. CT Colonography has been shown to be more sensitive than barium enema for the detection of colorectal cancer and large polyps9,10. CT Colonography is also the preferred examination by patients11. The findings of this survey suggests that CT Colonography in Ireland is largely being performed in accordance with the European Society of Gastrointestinal and Abdominal Radiology (ESGAR) guidelines in terms of CT Colonography acquisition techniques and standards for reporting7. Internationally the techniques used for patient preparation and image acquisition at CT colonography have evolved as the modality has developed. The adequacy of bowel preparation has improved with faecal tagging12 and the degree of colonic distension and image quality has improved with the use of fine bore rectal tubes and automated CO2 insufflators13. With the number of new cases of colorectal cancer expected to increase over the next ten years due to an increasing and ageing population, the demand for CT Colonography will also increase14. CT Colonography has a niche roll in frail and elderly patients where a limited bowel preparation approach can be used with diagnostic value to exclude gross pathology (mass lesions and polyps >1cm) 15.

A high proportion of reporting radiologists in Ireland have undergone formal training in CT colonography and have onsite access to a trained second opinion. As exposure to CT Colonography increases with its increasing utilisation, reader inexperience is less of a challenge. Most Irish radiology trainees are now trained in CT colonography interpretation. Technologically, acquisition and visualisation software has evolved to the point where most CT scanners now come with CT colonography capability which allow 2D and 3D image display. The major barriers to its expansion as evidence by this survey are neither professional nor technological but resource-related, limited access to CT scanner time and too few radiologists with too little time. This emphasises the need for investment in the technique as well as the need to maximise efficiencies for example by batch scanning, batch reading and dedicated CT colonography reading sessions. The majority of patients imaged with CT Colonography in Ireland are symptomatic and have had an incomplete colonoscopy. At the time of this survey relatively few CT colonography examinations were being performed for primary screening and surveillance but the referral criteria are beginning to broaden. Since the survey was performed the National Bowel screening programme, delivered by the National Screening Service, has been commenced. CT Colonography is now part of the National BowelScreen Programme as the completion test of choice for individuals with a positive faecal immunochemical test (FIT) who have had an incomplete colonoscopy or who are medically unfit for colonoscopy. The BowelScreen programme recognises that CT Colonography is a relatively new technique and therefore there are varying local practices. The programme has set quality standards and key performance indicators which will help to maintain and monitor CT Colonography practice to ensure the highest standards are adhered to.

In summary, CT Colonography has been successfully adopted and utilised in Irish radiology departments nationally. It is largely being performed in accordance with the published ESGAR guidelines. Although challenges exist to its widespread availability, it is increasingly recognised as the optimum imaging modality for investigation of suspected colonic pathology in this country, the test of choice in the investigation of elderly or frail patients and is the chosen completion test following incomplete colonoscopy in screening populations.

All authors declare that there are no competing interests.