Introduction
“Neurophobia”, the fear of neurology experienced by medical students, is a trend that was first highlighted over two decades ago1. Neurology’s deterrence of medical students and clinicians alike has been widely investigated and the perceived reasons highlighted: neurology is considered difficult, the undergraduate medical education is deemed inadequate and the management of patients is believed not to be rewarding for the clinician2-4. The trend of Neurophobia has been extensively publicised and discussed in recent years and appears to be a widespread phenomenon with studies worldwide demonstrating the presence of Neurophobia among medical3,5-8. This continued negative perception of neurology by medical students leads to low numbers of students wanting to choose neurology as a speciality in their future careers. There is also the concern of the trend of primary care physicians demonstrating low confidence in their ability to manage patients with neurological illness4,9. It has been demonstrated that the issue, again, appears to be with the training received for neurological illnesses and intense training in this area has been shown to have potential benefits10.

Students have been shown to demonstrate preconceived negative opinions of neurology although these preconceptions may be positively altered during the course of their clinical training11. Contrasting research has shown that medical students appear to lose interest in neurology during the course of their training12. This study was designed to interpret whether neurophobia has become a preconceived idea which is reinforced in students before any formal training has taken place.

Methods
Ethical approval was not required for this study as no personal information was obtained from the subjects and the results were anonymous. An online survey was distributed to medical students in University College Dublin via social media and email. The survey was circulated among students in preclinical years, with only academic training, early clinical years, where they had limited clinical experience, and clinical students in their final years of training. The questions in the survey were designed for students who had not had experience in neurology as part of their medical training. For students who had already completed training in neurology, the questions were to be answered retrospectively with how they had felt prior to commencing their training.

The questions were compiled based on observations highlighted in previous studies on neurophobia2, 3, 11 (supplementary material: table 1 and table 2). The students were asked if were apprehensive about studying neurology, if they perceived neurology to be difficult prior to studying it in comparison with oncology, cardiology, gastroenterology, genitourinary, endocrinology and nephrology and if they had heard any influential positive or negative comments regarding neurology before they studied it. They were also asked what they thought the most difficult part of neurology would be and if they would consider neurology as a speciality in the future. Finally, students were asked if a stronger focus on neurology in their basic science modules in preclinical training would have prepared them for neurology and if a change in the methods of teaching could help to promote neurology in a more positive light. Some of the questions were left open for students to comment if they so wished. The survey was anonymous and each student could only complete the survey once. It was circulated over a three month period at the end of the teaching year.

Results
There were one hundred and thirty-seven responses to the survey. These responses were from preclinical (forty four percent), early clinical (thirty one percent) and clinical (twenty-five percent) medical students. All variables fell within the 95% confidence interval (P<0.05) with no outliers. As the students were able to skip questions, some of the answers did not have a full response but all questions had more than one hundred and thirty-three responses. The results are displayed in supplementary material table S1 and table S2.

Seventy-seven percent had no previous experience of neurology or neuroscience before starting their medical training (figure S1) and the remaining students had either taken part in observerships or had taken a neuroscience module in a previous undergraduate course. Exactly half of respondents had completed neurology as an academic preclinical subject in their medical training. Only nineteen percent had heard of the term “Neurophobia” (figure S2). Eighty percent stated that they thought that neurology would be a difficult subject before studying it (figure S3). When compared with oncology, cardiology, gastroenterology, genitourinary, endocrinology and nephrology, neurology was perceived to be the most difficult before training had taken place (figure 1). 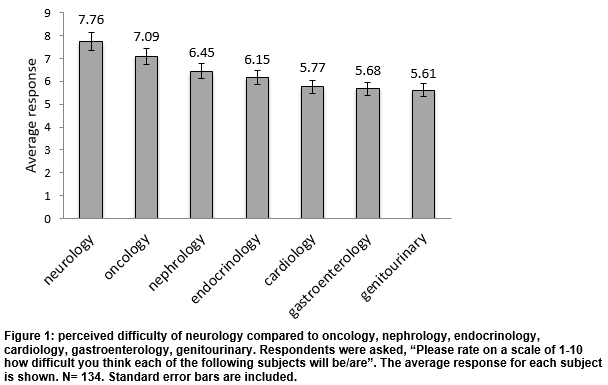 “Much of neurology is currently unknown and has yet to be discovered…This field will likely change dramatically within our lifetime”. 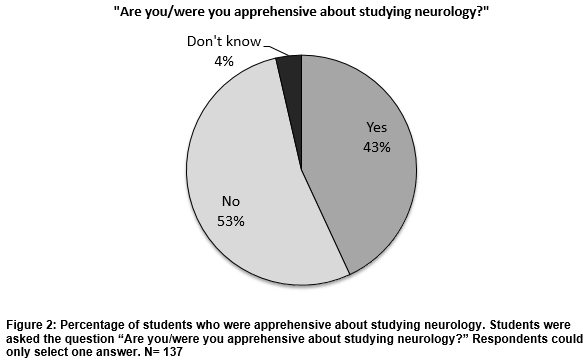 When asked if they were or had been apprehensive before studying neurology, fifty-three percent answered in the negative with while forty-three percent said that they had been (figure 2). Students rated neuroanatomy (thirty-two percent) and neurophysiology (thirty-eight percent) as what they thought would be the most difficult aspect of neurology. This was over neuropharmacology, pathology, the neurological history, differential diagnosis and the neurological examination (figure 3). 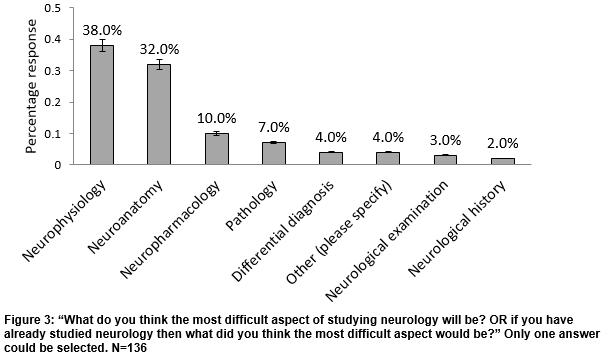 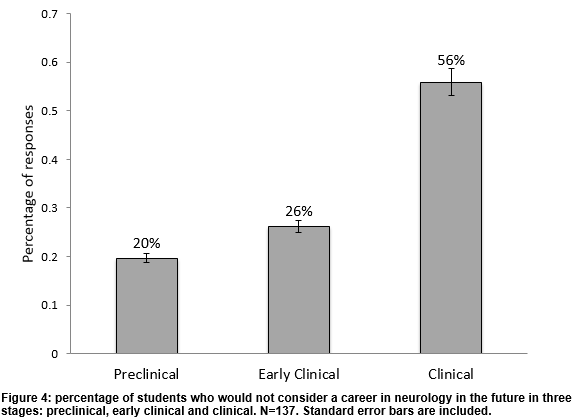 When asked if medical students’ negative view of neurology is justified, twenty-five percent agreed that it was and thirty two percent said that it was not (figure S6). Forty-nine percent of students believed that a stronger focus on neurology in basic science modules in preclinical years would be beneficial in preparation for clinical neurology with fifteen percent disagreeing, and thirty-six percent saying they did not know (figure S7). Forty-six percent of students agreed that a change in the methods of teaching could promote neurology in a more positive light with nine percent disagreeing (figure S8). This question was left open for discussion with the majority of comments indicating a divide between preclinical and clinical training:

“I found that I could understand the anatomy and physiology a lot better in the context of pathology, whereas the current separation of the two makes a lot of the earlier material appear abstract.”

“An emphasis on clinical application from an early stage could help some people to see the value in studying a topic they find very abstract”.

There were also positive comments:

“I thought teaching was excellent, both pre-clinical and clinical”

“I think it depends heavily on the student. I don’t know what kind of change in methods would help”.

Discussion
The results indicate that, contrary to our hypothesis, medical students do not appear to have a preconceived phobia of neurology. This is highlighted by the initial interest before exposure to the subject and subsequent gradual decline of interest in neurology as a potential speciality in the future between preclinical years and clinical years. While almost half of the students had heard negative comments regarding the difficulty of neurology almost equally students had heard positive comments from more advanced medical students and clinicians about how fascinating a subject it is. Neurology is still, however, perceived to be the most difficult subject prior to studying it when compared with other specialities.

Neuroanatomy and neurophysiology were highlighted as points of difficulty in students’ training though with open-ended questions it was highlighted that the main difficulty appears to be in relating this preclinical learning to clinical situations. Questions which were left open to comment by the students demonstrated that while some students complimented the teaching, criticism of the teaching was the most common point made. Some points of note were that a stronger focus on neuroscience in early preclinical years would be helpful but that there is a need for more correlation between preclinical and clinical training. Visual aids such as online videos for clinical training were mentioned as being helpful resources. Online videos for neuroanatomy have begun to be introduced in recent years, so perhaps more of a focus on this style of learning could be recommended. While one student remarked that neurology is considered the “black hole” of medicine, several students commented that focusing on the interesting and practical aspects of neurology would be more helpful than the tendency to focus on the negative.

One limitation of this study is that we cannot observe the progression of the students’ opinions during the course of their medical training. This could be overcome if we repeated the study with the same group of students at a future point in their training. Another limitation is that an introduction of the word “neurophobia” to students who had not previously encountered the term may have introduced an element of bias.

A possible future development of this study would be to carry out the survey on newly qualified doctors who have recently completed their undergraduate medical education and to delve into more detail on exactly how medical education for neurology could be improved. Medical students appear to initially have a positive view of neurology and perhaps with continued revision of teaching methods this interest could be cultivated and maintained throughout clinical training.

Conflicts of Interest:
The authors have no conflicts of interest to declare