Specially trained triage nurses play a crucial role in the operation of out-of-hours GP co-operatives. This study aimed to establish the proportion of all patient contacts with the out-of-hours GP co-operative based in the Mid-West of Ireland (Shannondoc), which were managed by triage nurses. A retrospective, descriptive analysis was conducted on the database of contacts to the Shannondoc urgent, out-of-hours primary care co-operative. Of the 110,039 contacts to the service in 2013, 19,147 (17.4%) were classified as being managed by nurses and 14.2% were managed by nurse telephone triage alone. Twenty-four percent of the 19,147 calls managed  by nurses involved children under six years. Triage nurses play an important role in administering safe medical advice over the phone. This has implications for the training of triage nurses and the future planning of urgent out-of-hours primary care services.

Nurse telephone triage has been shown to be safe and cost effective resulting in a reduced overall workload of GPs without an increase in adverse events for patients1-3. Since 1999, the majority of out-of-hours general practice (GP) care in Ireland is provided through GP co-operatives4. This type of out-of-hours urgent primary care service mirrors similar arrangements for the provision of this type of care in other European countries3, 5.

Triage is defined as the process where calls from people with health problems are received, assessed and managed by giving advice or referrals are made to a more appropriate service6. The role of specially trained nurses who triage all contacts made by the public to the co-operative is crucial to the effective operation of most GP co-operatives. It has also been shown to be acceptable to the public6. Nurse triage is cost effective and quality assured through nurse triage clinical decision support systems4. Nurse Triage Advice Alone (NTAA) is a term which refers to those contacts with the out-of-hours co-operative which are managed exclusively by the triage nurse and thereby removing the requirement to be seen by the GP7. The proportion of all contacts managed in this manner varies substantially between co-operatives, varying from 25 to 36% in international studies8-10. NTAA has been shown to be higher during the night but reduced when the patient age increased4.

In Ireland, empirical evidence regarding the role of nurses in out-of-hours care is lacking. Walsh and colleagues (2008) conducted a cross-sectional study to determine the impact of the triage nurse role in relation to patient outcome, satisfaction levels and expectation of care10. The study found that overall satisfaction levels with the service were high, with 77% of patients rating the service as either excellent or good and with regard to concordance with the advice given by the telephone triage nurse, the majority of patients (82%) reported that they had followed all the advice given10. With limited data on the role of triage nurses in out-of-hours care, the current study aims to determine the workload managed by triage nurses.

The study was based on the out-of-hours GP co-operative located in the Mid-West of Ireland which operates under the name of Shannondoc and was set up in 2002. Shannondoc provides urgent out-of-hours care to over 300,000 people living in Limerick, Clare and parts of Tipperary and Kerry. The service includes: 120 GPs, 30 triage nurses and 50 support staff (e.g., drivers, receptionists and administration staff).

A descriptive analysis of the database of contacts to Shannondoc from January 1st 2013 to December 31st 2013 was carried out. All contacts were categorised into different types of consultations in the database. These categories included: Treatment centre, Home visit, Nurse, Doctor advice and Call answering.  A retrospective, descriptive analysis of contacts categorised as managed by the nurse was performed by age of the contact, action taken by the nurse, month and time of day. Ethical approval for this study was granted by the University Hospital Limerick Research Ethics Committee. 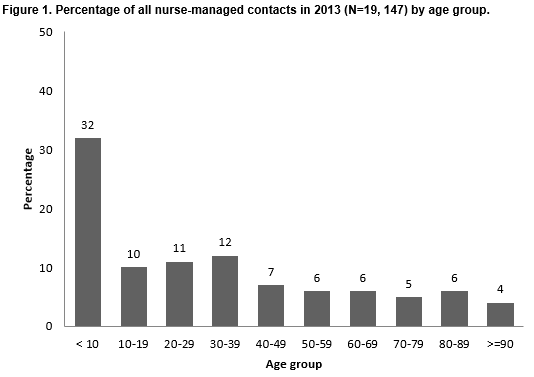 The actions taken by the nurse for all nurse-managed contacts are summarised in Figure 2. Eighty-one-and-a-half percent of contacts within this category were managed by Nurse Telephone Triage Alone (NTTA) and did not involve other healthcare professionals. This results in 14.2% of all the 110, 039 contacts to the service in 2013 being managed by NTTA. 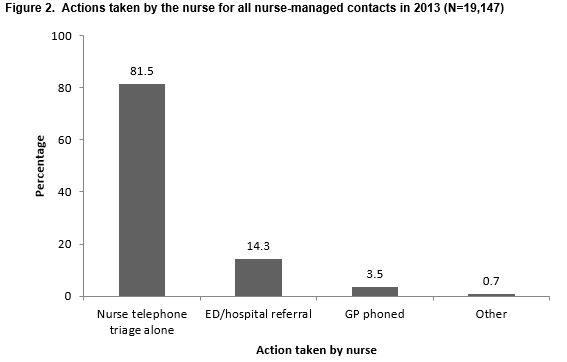 An emergency department (ED), or hospital referral involved the triage nurse facilitating the transfer of patients to hospital either via ED or by direct referral. These cases involved the nurse ringing an ambulance on behalf of a patient when a clinical emergency had arisen or when the GP or the hospital staff had pre-arranged a hospital assessment in the event of the patient deteriorating. The patient or the patient’s contact subsequently rang the nurse who affirmed this course of action or assisted with this plan. Actions within the GP-*phoned category included the nurse ringing the patient’s GP with a request for information or assistance from the GP or to inform them that their patient had died.  If the nurse received a call from a patient in the morning when the co-operative was no longer operational at that time, the GP was also contacted.

Just over 99% of contacts managed by the nurse involved NTTA, ED or hospital referral or GP phoned. Figure 3 summarises the percentage of each age group in the context of the three most common actions taken by the nurse (NTTA, ED / Hospital Referral, GP phoned). As age increases, referrals tend to increase as does contact with the patient’s GP. 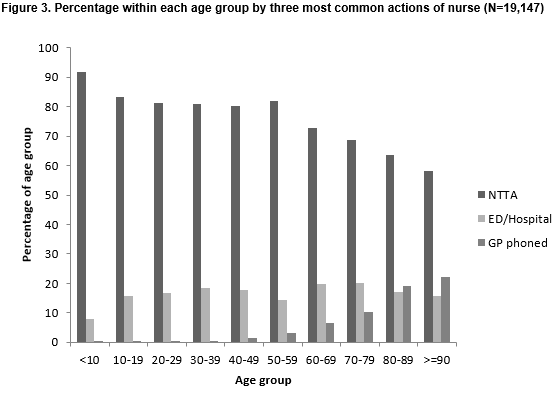 The actions for the other 0.7% of contacts involved referring patients to dentists; liaising with the police to contact a doctor to perform forensic examinations, or to assist the police with other matters; or contacting palliative care and community intervention teams.

This study reveals the vital role played by triage nurses in an Irish out-of-hours primary care co-operative. Over 17% of all contacts to the Shannondoc service in 2013 were managed by nurses. Currently, no national database exists, so we cannot compare our percentage (17%) of calls managed by nurses with other Irish co-operatives. Collecting this data from individual co-operatives would be of benefit in terms of planning the resourcing of co-operatives as well as reflecting possible geographical variations. Just over 14% of all contacts were managed by nurses alone and did not involve another health care professional, reflecting the integral role the triage nurse plays in the safe and efficient operation of urgent out-of-hours primary care co-operatives. The percentage of contacts categorised as NTTA in this study (14.2%) is lower than that observed in an observational study of a Dutch out-of-hours co-operative (27.5%)7.

Our study shows that triage nurses need to have a high level of competency in dealing with paediatric problems, with almost one-quarter of all contacts managed by nurses involving children aged under six years, and over eight hundred calls managed by nurses between midnight and eight a.m. in 2013 dealt with parents of young children. Competency in managing paediatric problems is an essential requirement for triage nurses, as evidenced by our analysis. In Ireland, the General Medical Services scheme provides primary health care, free of charge to eligible persons. This scheme was extended in 2015 to all children under the age of six years and previous research has suggested an increase in the number of GP consultation rates among this population as a result of the new scheme11. Our study suggests that given the large number of paediatric cases managed by triage nurses, the extension of the service to this cohort may mean a larger volume of work for the triage nurses. This needs to be borne in mind by those charged with planning and funding the service, so that the extra volume of calls to the service does not have a deleterious effect on patient safety or staff morale.  It may well be the case that further extensions to the scheme will increase the workload on the urgent primary care out-of-hours service. Furthermore, this study also shows the important role of the triage nurses in assisting older people especially during the night. A quarter of nurse-managed contacts between midnight and 8am involved those aged 70 or over. Increasing rates of ED and hospital referral or contacting the patient’s GP were also observed for nurse managed contacts for those aged 70 or over.

The current study also shows the important and pivotal role triage nurses play in co-ordinating the wider community-based health services including liaising with the ambulance service, the patient’s GP, dentists, palliative care teams, community intervention teams and the police. The relatively low level of engagement with the palliative care teams in this study likely reflects the direct access to out-of-hours palliative care services as well as GPs making themselves available to these patients out-of-hours. Analysis of the workload of co-operatives may be useful in guiding the training of nurses and the organisational planning of the service. Previous research indicated the potential risks to patients where triage nurses underestimated the level of urgency of health complaints and suggested the importance of providing an educational programme for triage nurses3. However, earlier literature has also advocated the benefits of computerised clinical decision making software for triage nurses4, 12. In a recent HSE review of GP out-of-hours care, the application of GP triage nationally, would cost €32.2m as opposed to the nurse telephone triage model at €17.2m4, therefore it is cost effective to provide further training and support for triage nurses in out-of-hours care.

D.M. and C.O’C. were members of the committee which planned the setting up of Shannondoc.

There is no conflict of interest on the part of any of the authors in respect to the design and or funding of this article.