The Irish population is getting older, and so too is the motorcyclist population. In Ireland although motorcycles represent a very small proportion of the total number of licensed vehicles (1.4%)1, motorcyclists are consistently over represented in road fatality and injury statistics. In 2014, motorcyclist fatalities in Ireland were 28.45 times greater than those of private car drivers and passengers per mile travelled1. The total number of licensed vehicles recorded on Irish roads on 31st December 2015 was 2,570,294, of those 36,974 were motorcycles, rising from 26,085 in 1985 and 30,638 in 20001. However, growth in motorcycle popularity is slowing in recent years and the number of motorcycles being registered for the first time is reducing. In 2015, only 2830 motorcycles were registered for the first time compared to 7420 in 20072. Older car drivers have an excellent safety record3: older motorcyclists, however, appear to be a particularly vulnerable group and have attracted less recognition. Several studies internationally have documented a rise in fatalities and injuries in older motorcyclists4,5,6. Motorcycling has changed significantly over the last few decades. More people are riding for pleasure rather than for commuting or transport7. Older motorcyclists generally have greater purchasing power and choose to ride more expensive larger capacity engine motorcycles. A substantial proportion of this group are returning riders, who despite presumed depreciation of their riding skills in the intervening years, resume motorcycling on more powerful motorcycles than they ever rode previously. We sought to examine older motorcyclists in Ireland: to see if older motorcyclists are particularly vulnerable road users, if older motorcyclists are being affected by a disproportionate rise in injuries and fatalities, as in other countries8,4,5 and what factors could potentially be responsible for this. We reviewed the existing literature relating to this subject and we collected and examined data from the Central Statistics Office, the Road Safety Authority and Irish hospital information recorded by HIPE.

Methods
We obtained data from the Healthcare Pricing Office which records details of Irish hospital admissions regarding hospitalised motorcyclists including type of injury sustained, length of stay, and fatality rate. We also analysed data provided by the Central Statistics Office and the Road Safety Authority relating to the number of registered motorcycles, engine capacity of registered motorcycles, the type and nature of collisions, and injury and fatality rates per age. In the previous literature, we reviewed, there was considerable variability in the definition of an “older motorcyclist” with different papers considering riders aged from above 40 to above 65 to be “older motorcyclists”. For the purposes of this study, we generally considered riders aged 55 and over to be “older motorcyclists”. 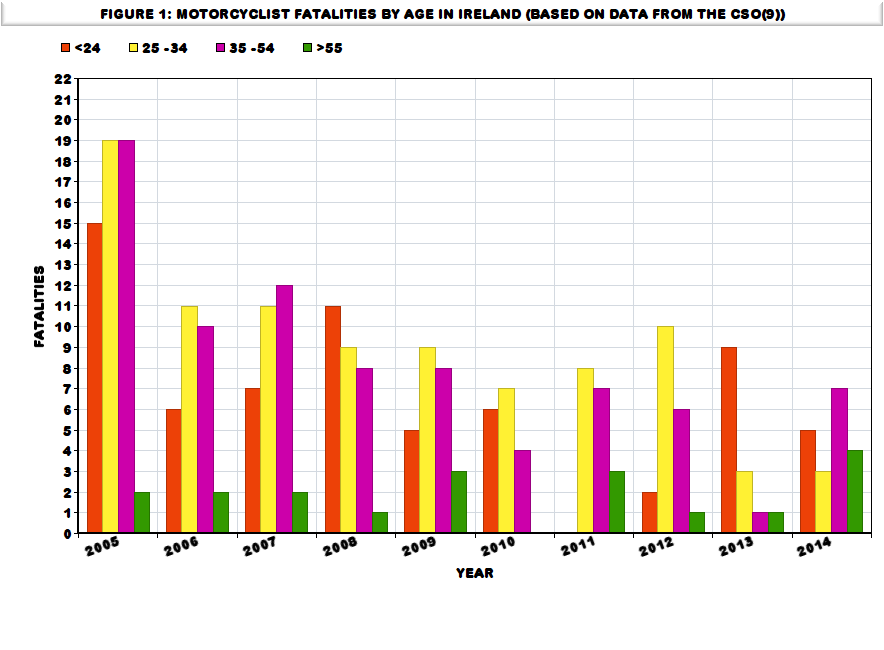 Injury Severity
Many studies in other countries have found older motorcyclists have higher mortalities and suffer more severe injuries. They have higher injury severity scores, longer lengths of stay in hospital, longer lengths of stay in ICU, more complications and increased complexity of fractures5,6,12,13. 992 motorcyclists were hospitalised in Ireland between 2012 and 2014. Motorcyclists aged between 30 and 49 years and ≥50 had a longer length of stay compared to riders <30, but there was no significant difference between the ≥50 group and the 30-49 group. In 2014, the mean length of stay was 8.29 days for the ≥50 group, 7.5 days for the 30-49 group and just 3.75 days for the <30 group14. 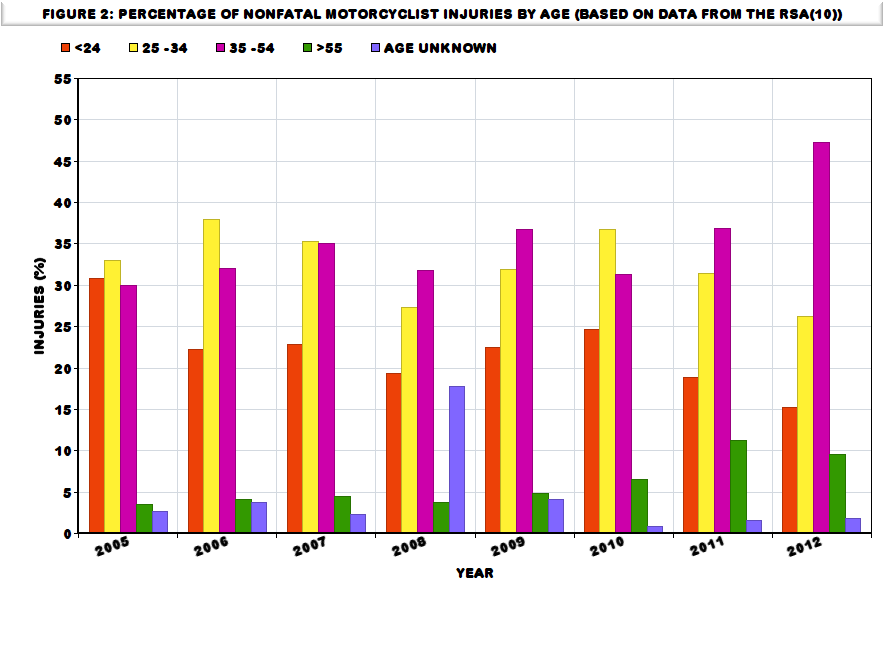 Injury Pattern
In Ireland, the most common location of injury is the knee and lower leg followed by injuries to the head and neck, shoulder and upper extremity, abdomen and lower arm14. Injuries to the abdomen/lower back, hip and thigh and head or neck are associated with the longest length of stay in Ireland. Other studies have shown that head, thoracic and abdominal injuries are associated with the greatest severity and mortality5,6, . Older motorcyclists are significantly more likely than younger riders to sustain thoracic and head injuries5,15. Riders ≥40 are nearly twice as likely to die from head injuries and abdominal injuries13. Injuries at all sites are more severe in older adults5.

It is likely that a significant proportion of older motorcyclists in Ireland are returning riders, who rode in their youth and resume riding later in life. These motorcyclists tend to purchase motorcycles with large capacity engines in spite of a possible loss of skill in the intervening years7, ride fewer miles per week and are more likely to ride for recreational purposes22. National licensing data do not differentiate between continuing and returning riders. Further study of this subgroup of older motorcyclists would be useful to evaluate their impact on trends in injuries and fatalities. It has been suggested that older motorcyclists and older car drivers are more likely to crash due to changes associated with aging including poorer vision, balance and reaction times. There is no evidence to this and indeed, both older motorcyclists and older car drivers have been consistently found to be less likely to crash compared to their younger counterparts1,3.

Training courses for older motorcyclists and returning riders may reduce crashes by improving riders’ skills and promoting safe riding behaviour, although there is a lack of firm evidence to support this23. Many interventions have been demonstrated to be effective in preventing injuries and fatalities in both younger and older motorcyclists: road infrastructure and conditions, wearing helmets, motorcycle and rider conspicuity, enforcing speeding and alcohol laws and electronic aids such as ABS5,24,25. Stricter licensing laws have been implemented but these may decrease crashes by reducing the number of motorcyclists on the road rather than making motorcyclists safer riders23. The process of obtaining a licence to ride a motorcycle in Ireland is now much more convoluted and expensive which likely discourages potential younger riders from motorcycling and has contributed to the proportional increase in older compared to younger Irish motorcyclists. Motorcyclists are more vulnerable road users than car occupants. Both the vulnerability of older motorcyclists and the importance of motorcycling as a leisure pursuit and means of transport should be acknowledged. Irish road safety strategies and trauma services need to develop preventive and treatment strategies to protect the growing cohort of older motorcyclists to ensure they can travel on our roads safely.