Methods
Standardised clinical data was retrieved from all case notes (N=108) during the study timeframe (Jan-June 2016).

Discussion
The majority of work conducted by the PCLPS involved children with acute or deteriorating psychiatry disorders, previously known to CAMHS, with a much smaller focus on typical liaison presentations. Adequate resourcing of hospital based PCLPS and ‘out of hours’ CAMHS are necessary to allow PCLPS provide a specialist service to children with combined medical and MH problems. Given the development of the National Children’s Hospital, addressing these resourcing deficits is of vital importance.

Introduction:
Mental Health (MH) disorders of significant severity to warrant some form of intervention occur in 10% of children and are effectively managed by community child MH services (CAMHS)¹. They are twice as high with co-morbid medical problems and failure to recognise or treat can lead to poorer outcomes, overall functioning and prolonged admissions2 3. Paediatric Consultation Liaison Psychiatry Services (PCLPS) are specialised services designed to address co-morbid medical and psychiatric problems. In the absence of emergency CAMHS provision, PCLPS resources are increasingly being diverted to ED referrals at the expense of providing necessary PCLPS services to routine paediatric patients. Furthermore, under-recognition or treatment of MH problems in paediatric admissions can lead to prolonged and more expensive hospital care, poorer outcomes and overall poorer functioning4. However, in the absence of CAMHS out of hour’s services, PCLPS are directed to increasing numbers of children with acute MH problems presenting to the emergency department (ED) often at the expense of psycho-somatic illnesses.

Methods
To examine the cases being referred to PCLPS and contrast case complexity, cost and duration of stay among PCLPS patients referred from paediatricians and those self-presenting to ED. Ethical exemption was sought and approved from the hospital Ethics Chairperson. A study specific proforma was developed to facilitate standardised clinical data retrieval from all case notes (N=108) during the study timeframe (Jan-June 2016). The Paddington Complexity scale, designed to identify complexity within child MH cases was also utilised5.

Results
The majority of attendees were female (N=59, 55%) with a mean age of 13.2 (SD 2.4) (Table 1). There was little ethnic diversity, with 101 (94%) of white ethnic background. 72 (67%) children had both natural parents as their main carers; 77 (71%) parents were reported as employed or financially stable. In over one quarter of cases (30, 28%) children were being cared for by one parent only and 5 patients were in foster care. Of the 108 children an overwhelming 104 (96%) had carers who were facilitative in both attitude and co-operation with the CL team’s assessments and treatment plans. 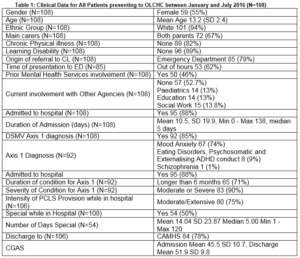 There was a very strong correlation between days in hospital and requiring a special (r=.931 n=108, p<.00) and a medium negative correlation between CGAS score on admission and both duration of stay (r= -.425, N=74, p<.00) and requiring a special (r= -.474, N=74, p<.00), suggesting children who were perceived to be most impaired (low CGAS) were most likely to require a special and remain in hospital longer (Table 2). Children with an eating disorder (r= -.603, N=107, p<.00) were also more likely to be of longer duration and ‘specialed’ (Table 2). Prior attendance at CAMHS or DSH did not influence duration of stay or special. Children who were previously known to CAMHS were indistinguishable from those presenting with MH difficulties for the first time or ‘novice MH cases’ on all measures. Although CAMHS attendees were more likely to present within normal working hours (56% compared to 38% ‘novice’), this did not reach statistical significance (×¹ (1) = 3.285, p=.07). Similarly they were slightly, but not significantly, less likely to be admitted (83% versus 94%, ×¹ (1) = 3.205, p=.073). They were no more likely to require special nursing, to be rated as requiring high clinical intensity or to be rated by the clinicians as an inappropriate admission.

Discussion
The results indicate that the majority of consultations provided by the hospital psychiatry liaison team were to children with acute and severe MH disorders indistinguishable from a typical CAMHS cohort. Specialist paediatric consultation liaison consultations constituted a much smaller number, although proportionally took up more resources in both clinical hours and cost. Adequate resourcing of both hospital based PCLPS and CAMHS are necessary to allow PCLPS provide a specialist service to children with combined medical and mental health problems, and at the same time have services which can facilitate acute psychiatric assessments within and outside of normal working hours. This is especially timely given the development of the National Children’s Hospital, to ensure that adequate MH resources are available to support the growing complexity of paediatric care, and the growing number of paediatric consultation liaison OPD referrals made to the PCLPS department that are currently not offered appointments.

Conflict of Interest:
The authors confirm they have no conflict of interest to declare.