2UCD Institute of Food and Health

A recent systematic review and meta-analysis shows that appropriate use of oral nutrition supplements (ONS) in community patients is associated with a significant reduction in hospitalisations. Given higher use of acute care resource by malnourished versus normally nourished patients, this paper examines the potential to reduce bed utilisation by applying these results to Irish inpatient and malnutrition prevalence data. In 2013, adults admitted to hospital with medium or high malnutrition risk scores used an estimated 36% of adult acute inpatient bed days. Targeted use of ONS in community patients might reduce hospitalisation by 168,438 adult bed days per year, equivalent to 460 beds per day. This is particularly important, given high bed occupancy rates and twelve month daily averages of 254 patients on trolleys. Relevant stakeholders should consider strategies to ensure effective ONS use with a view to improving outcomes and reducing pressure on the acute care system.

Clinical programmes have been set up to improve patient flow and optimise capacity use within Irish hospitals. Despite the need to reduce avoidable bed use and release much needed bed capacity, the potential impact of reducing disease related malnutrition (DRM)  has not been examined.

Although largely preventable if detected early, DRM is a significant cause of excess morbidity and mortality in older and chronically ill patients and a major burden on healthcare systems. Due to delayed recovery and higher complication rates, poorly nourished patients have more frequent GP and outpatient visits, up to twice as many hospital admissions and longer and more complicated hospital episodes1-4. It is estimated that at any time in Ireland, DRM affects approximately 140,000 adults with associated annual care costs exceeding €1.4billion5, mostly arising in acute care settings. This is despite the fact that the vast majority of malnutrition exists in the community1 where the potential for its prevention and treatment is greatest.

Oral Nutrition Supplements (ONS) are designed to prevent and treat undernutrition. Evidence of their efficacy is underpinned by expert clinical guidelines including those of the National Institute for Clinical Excellence (NICE)6. There is increasing evidence of their cost effectiveness compared to standard care, arising largely from reductions in use of acute care resources.  For example, in an 11 year US study involving 44million patient episodes, ONS use significantly reduced hospital inpatient stay, episode costs and readmissions7. More recently, a systematic review and meta-analysis involving 19 publications (9 randomised controlled trials) found that multi-nutrient ONS use in undernourished community patients was associated with 16.5% fewer hospitalisations, delivering overall net cost savings8.

This paper applies the main meta-analysis outcome, reduced hospitalisation rate, to Irish inpatient activity and malnutrition prevalence survey data to examine the potential for targeted ONS use to reduce excess hospital admissions and acute bed day use in those treated.

The analysis was conducted in three steps. The first step established the proportion of inpatients aged 18-64 and >65 years who were malnourished (defined as medium + high risk using MUST criteria9). To do this, prevalence data from two national malnutrition screening surveys conducted in 2010 and 201110,11 were applied to relevant inpatient data (defined as inpatient discharges) from the Hospital Inpatient Enquiry system (HIPE) for the full year 2013, which was the latest available data at the time of preparation12. To account for variations in prevalence rates by season and across different hospitals over the two years surveyed, higher and lower values (+/-10%) were applied. The second step calculated length of stay (LOS) and annual bed day use for malnourished patients, based on an estimated 30% longer LOS1. Accordingly, LOS for those with and without malnutrition were calculated using the following equation:  Mean LOS (total no. days) = (% prevalence low risk)y + 1)% prevalence medium + high risk) x 1.3y), where y = LOS for low risk patients and 1.3y = LOS for medium and high risk patients, as per Elia et al (2009)1. The third step involved applying the percentage reduction in hospitalisation estimated in the meta-analysis of Elia et al. (2016) to the annual bed day number for malnourished patients. This identified the number of bed days that might be saved by appropriate use of ONS in suitable patients. In the meta-analysis of Elia et al. (2016), values from nine full text RCT were examined and ONS use found to reduce hospitalisation by 16.5% (SE 4.0) (P=0.001; N=1051 subjects; 12 = 16%, P=307). Higher and lower values (+/-25%) were applied here, having been deemed sufficient to account for uncertainties regarding the proportion of malnourished patients admitted to hospitals who may have already been commenced on ONS in the community and any differences between the study populations and the Irish patient population that might influence outcome results, such as compliance. 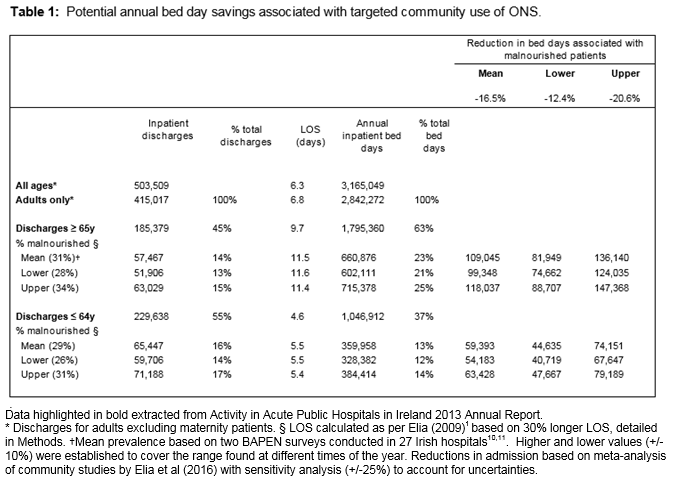 In 2013, there were 415,017 inpatient adult discharges (excluding maternity), 45% aged over 65 years (n=185,379) and 55% under 65 years (n=229,638) (Table 1). Applying the NSW malnutrition prevalence findings retrospectively to inpatient activity data for 2013 suggests that approximately 122,914 episodes involved patients with moderate or high risk scores for malnutrition, this number likely to fluctuate by around 5500 depending on seasonal variations in admission rates.  Assuming similar rates of malnutrition to those found in the Irish inpatient population in 2010 and 2011 and comparable effects on LOS to those established from the literature according to age group (all diagnoses) indicates a mean LOS for older malnourished patients of at least 11.5 days, double that of younger malnourished patients (5.5 d) and 1.7 times that of adult patients in general (6.8d). Thus, malnourished patients of all ages are estimated to have accounted for 30% of inpatient adult discharges but 36% of inpatient bed days in 2013.

Table 1 also describes the potential annual savings in acute inpatient bed days arising from early intervention in ‘at risk’ patients with ONS. Applying a 16.5% reduction in hospitalisation as per Elia et al. (2016) suggests that early use of ONS could release a mean of 168,438 (6% of total) bed days for other patients annually. The relative impact was greater in adults aged over 65 years (4% of bed days) than younger adults (2% of bed days). Testing for sensitivity to examine the effect of uncertainties such as variations in malnutrition prevalence by age and season and the proportion of malnourished patients already receiving treatment on admission to hospital gave a lower estimate of potential bed day savings of 115,381 (4% of all bed days) and a higher estimate of 226,587 (8%. In all instances, greater benefit was observed from early use of ONS in older patients.

This analysis shows that malnourished adults, using MUST criteria, use an estimated 36% of all adult acute hospital inpatient bed days in Ireland. Furthermore, it suggests that targeted use of ONS in the community has the potential to release 168,000 adult bed days per year based on available data, equivalent to 460 beds. This is important given that acute bed shortages in 2015 resulted in daily averages of 254 patients on trolleys despite bed occupancy rates reaching 92% of capacity versus recommended maximum levels of 85%13.14.

Although clinically relevant malnutrition affects approximately 4% of the adult population at any time, its high prevalence (30%) and severity (75% high risk, 25% moderate risk scores) 10,11 in patients admitted to Irish hospitals indicates a failure to identify and treat these patients appropriately in primary care settings, with major clinical and cost implications. This is perhaps unsurprising given the lack of systems and dietetic resources to ensure its early detection and appropriate treatment at primary care level15.  Currently routine screening initiatives are confined to residential care, with any primary care screening programmes regional in nature15. Given that around 92% of malnourished patients identified in Irish hospital are admitted from their own home,10,11 improvements in screening and recognition of such patients by primary care providers are warranted.

The current analysis suggests that earlier, appropriately targeted ONS intervention used in accordance with best practice and with the intention of preventing malnutrition and its sequelae could release ≥ 4% of total acute bed days for other patients. This is significant with respect to both cost and bed occupancy rates.  In 2011, the average base costs for an acute inpatient bed day and an inpatient episode in an Irish hospital were €825 and €4580 respectively (Casemix, personal communication). Given that malnourished patients have longer LOS and higher episode costs, any reduction in hospitalisation and release of acute inpatient bed days has the potential for significant net savings and improved efficiencies in an overburdened system.

It has been argued that ONS are overprescribed by GPs16 although expert opinion from hospital specialist dietitians estimates that fewer than 15% of malnourished patients identified on admission to hospital from primary care settings are already receiving appropriate nutritional support.  Although no published statistics exist regarding current ONS use in Ireland, total ONS expenditure (including paediatric products, thickeners and modular supplements) under community funded schemes was publicly reported to be approximately €30million in 2013. Based on IMS data regarding the proportion of expenditure that relates to adult multi-nutrient products and expert opinion regarding the average number of units prescribed per day across all adult patients, we estimate that between 17,000 and 20,000 adult community based patients are receiving ONS at any time. Whilst this is not an insignificant number, it represents around 1 in 7 of the estimated 140 000 adults with DRM nationally at any time.

This paper describes the potential benefits of earlier intervention aimed at prevention of malnutrition in community patients as a means of reducing hospitalisation. Strengths include the use of nationally published prevalence and hospital inpatient activity data and the inclusion of a two-way sensitivity analysis with respect to malnutrition prevalence and ONS use. Limitations acknowledged include the low-moderate (16%) heterogeneity of the studies included in the systematic review by Elia et al (2016), the lack of detailed data on ONS use and prescribing practices in Ireland and the retrospective application of national prevalence data obtained in 2010 and 2011 to HIPE inpatient data for 2013. The decision to apply national survey data retrospectively to the latest available inpatient data was considered to provide the most reliable assessment of the impact of malnutrition or its reduction on current and future bed capacity.

In summary, more than one third of all Irish acute hospital bed days in 2013 are estimated to have involved malnourished patients. This analysis suggests that more effective systems for detection of nutritional risk via screening programmes coupled with evidence-based treatment pathways and dietetic input to ensure earlier targeted use of ONS in community patients has the potential to release much needed acute bed capacity back into the system, improving patient flow. Against a backdrop of chronic shortages in acute inpatient beds, the impact of DRM and the potential for improved outcomes and efficiency gains arising from its prevention merits further consideration and focused research.

9. Elia M, Screening for malnutrition: a multidisciplinary responsibility. Development and use of the ‘Malnutrition Universal Screening Tool’ (‘MUST’) for adults. MAG, a Standing Committee of BAPEN (ISBN 1 899467 70 X) 2003.