Suicide is the third most common cause of death among adolescents globally, and poisoning is the leading method of attempted suicide. Survival after self-poisoning or drug overdose (OD) is common, providing an opportunity for secondary prevention. The aim of this study was to highlight pattern of presentations and preceding factors of OD in an adolescent population. We retrospectively evaluated the data of 85 adolescents presenting to a large regional hospital with OD over a 3-year period. The female-to-male ratio was 4.3:1. The median age of adolescents was 15.83 (range: 11.32 – 16.98) years. History of deliberate self-harm (DSH) was documented in 44.7%. Twenty-eight (33%) patients had been under the care of the CAMHS prior to index admission. Acetaminophen was the commonest drug used. Depression was the most common cause of mental illness in the study group. Substance abuse and conduct disorder were significantly commoner in males (p<0.05). Self-poisoning including OD in adolescence is a strong predictor of suicide; understanding the probable triggers can be significant in establishing appropriate prevention strategies.

Introduction
Self-poisoning may be defined as the self-exposure of an individual (by ingestion, inhalation, absorption through the skin, or injection) to an amount of drug, toxin (biological or non-biological), or other chemicals associated with the significant potential to cause harm. Self-poisoning can be accidental or deliberate, fatal or non-fatal. Drug overdose (OD) applies to drugs ingested, injected, inhaled or applied topically. Suicide is one of the major causes of death in many populations, particularly adolescents. It is the second leading cause of death among those aged 15-24 years in the USA1. World Health Organisation (WHO) reported that upwards of 800,000 people commit suicide all over the world, with one death by suicide every 40 seconds2. While the annual suicide incidence decreased from 12.5 to 10.4 per 100 000 persons in the 1990s, incidence has been rising again since the 2000s3. Self-harm is the strongest risk factor for future suicide4,9. [Intentional self-poisoning including drug overdose has also been reported as the most common method of self-harm among patients admitted to the hospital for deliberate self-harm (DSH)5.

Public health interventions aim to reduce the morbidity and mortality of self-poisoning by limiting the availability of potentially toxic medications to at-risk-populations. For example, European data has shown that limiting acetaminophen package size has reduced the morbidity and mortality in acetaminophen ingestions6. An understanding of the preceding factors and potential triggers of self-poisoning/drug overdose may aid in the development of specific intervention strategies. Completed suicide and deliberate self-harm show considerable overlap; therefore, aftercare management of self-harm is as important in the prevention of suicide, as detection of young people who may be predisposed to attempting suicide. The aim of this study was to evaluate the presentations and preceding factors of drug overdose in an adolescent population in a large regional hospital.

Methods
This was a retrospective data analysis of all adolescents seen at the Paediatric emergency unit of Cork University Hospital for drug overdose from January 2014 to December 2016 inclusive. The data was retrieved from the Hospital Inpatient Enquiry (HIPE) system. This was carried out to evaluate the presentations of drug overdose, the drugs used, and the preceding factors or possible medical background related to the events. Details of drug overdose and preceding factors were collected from the respective medical charts. Ethical approval was not required because of the nature of the study. The study was approved by the Clinical Governance Unit of Cork University Hospital. 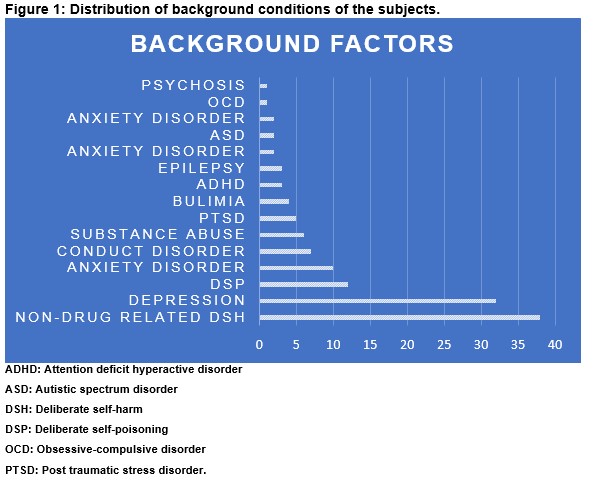 Preceding factors/ background
Thirty-eight (44.7%) adolescents had a history of deliberate non-drug related self-harm while 14.1% (n=12) were previously seen for deliberate self-poisoning/OD. Depression was the most common mental health problem associated with OD. Ten (11.7%) patients were documented to have left a suicide note prior to events. Figure 1 shows other mental and mental related illnesses. Other preceding factors were grouped into unstable family dynamics, family history of mental illness, social problems, romantic break ups amongst others (Figure 2). Certain factors had gender predilection; substance abuse and conduct disorder were more common in males (p < 0.05). Correlations of several probable triggers and gender are shown in Table 1. 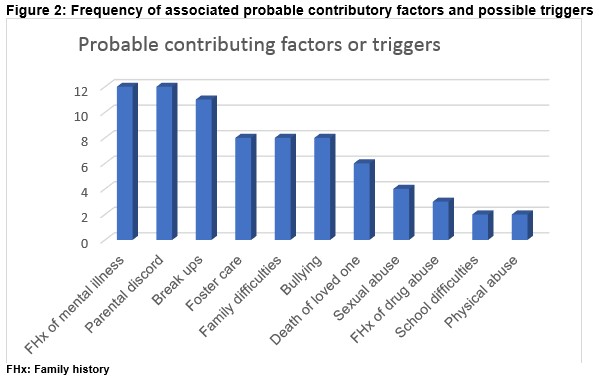 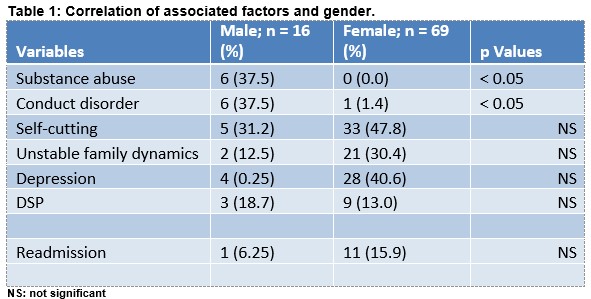 In-hospital Care
Thirty-three out of 56 patients with paracetamol OD were treated with N-Acetylcysteine (NAC) based on calculated acetaminophen dose > 150mg/kg and/or treatment point on the graph depending on time of presentation. Seven (21.2%) had deranged liver function tests and coagulation profile. Two patients who presented less than 60 minutes after paracetamol overdose received activated charcoal. Of all patients reviewed, 33% (28/85) had been under the care of the Child and Adolescent Mental Health Services (CAMHS) with a diagnosis. Seventy-one (83.5%) patients were reviewed by the CAMHS team before discharge. Medical Social worker assessed 13% (11/85) before discharge. Twelve (14%) patients were readmitted for drug overdose; 83% females. The readmissions occurred within an interval of 0.25 and 20 months in the study period. 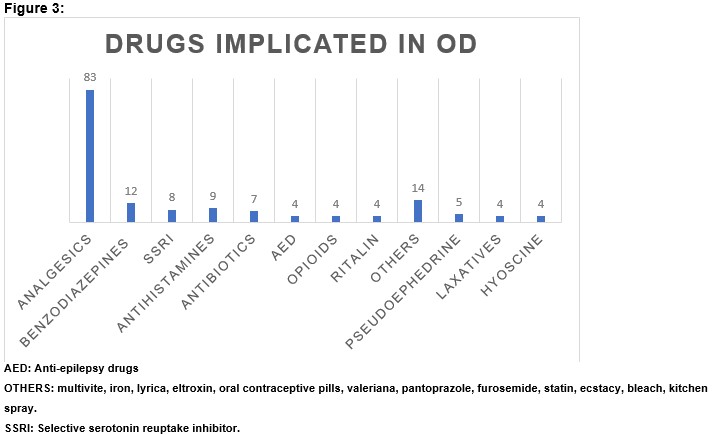 Outcome
Six (7.1%) patients were transferred to Eist Linn Cork, a Child and Adolescent In-patient unit for mental health services. Only one patient was intubated and transferred to Intensive Care Unit following polypharmacy (alprazolam, zopiclone and fluoxetine) overdose. There was no mortality recorded in the study population.

Discussion
This retrospective study was undertaken to evaluate the presentations of adolescents to the Paediatric Emergency department with OD. The preceding factors and possible triggers were assessed as well. Only one subject had no documented preceding factor or medical background that might have accounted for OD. The females (81%) were more represented in this study which is no different from several studies7. Majority (70/85) were between ages 14 and 16 years. The numbers in this study probably represent only the tip of the ice berg, as it is likely that substantial numbers of recorded self-poisoning occur in the community8. There may be gender differences in terms of preceding factors of self-harm. Approximately 40% of the males evaluated had a history of substance abuse. Conduct disorder was seen commonly in males. There was no significant gender difference in depression in this study.

44% of the subjects seen during this study period had a history of non-drug related self-harm including cutting skin, hanging and near drowning. Self-harm; even that performed outside of a suicide attempt is well known to be a major risk factor for future suicide attempts; as such, intense efforts should be made to reduce or prevent incidents of self-harm, irrespective of the type4,9. Suicide attempts are not accidents but are deliberate actions taken by individuals as ‘a cry for help’. The importance of investigating preceding factors and life stressors on suicide attempts has been highlighted10,11. No mortality was recorded in this study but 14% re-presented with OD within a two-year period of the study. This might be a pointer that a lot still needs to be put in place. Following local guidelines, any patient seen in the Paediatric emergency department for OD should be assessed by CAMHS before discharge and subsequently followed up if deemed necessary. A consult for medical social work (MSW) input is also sent during the index presentation. However, not all these patients get to be seen by either CAMHS or MSW before discharge. This might be accounted for by limited manpower and unavailability of on-call CAMHS and MSW team as majority of these cases are seen during on-call hours.

The youngest patient in this study was aged 11 years, and incidence increased with age among both genders. Most of the subjects were between ages 14 and 16 years. This shift in incidence with age may be due to a range of factors, such as increasing prevalence of psychiatric disorders, lifestyle, life events, and problems, and social influences12-16. O’Connor et al15 demonstrated that smoking, drug use, bullying, physical abuse, sexual orientation worries, serious boyfriend/girlfriend problems and self-harm by friends or family were associated with self-harm as lifestyle, life events and problems, and social influences. In our study, break ups with boyfriend or girlfriend accounted for 13% of possible triggers of OD. Other social stressors unravelled in this study comprised cyber bullying, moving houses, worry over sexual orientation, and coping with school stress. This was akin to a study by Hawton et al which represented a distinct pattern of deliberate self-harm in under 15-year olds17.

Moreover, the prevalence of psychiatric disorders which is one of the important causes of self-harm dramatically increased during adolescence13,14. Co-existence of risk factors has been found to increase the probability of self-harm compared to existence of only one factor11,18. Family history of mental illness is another crucial factor in self-harm. Seventy-five percent of the patients with a family history of depression (mother and maternal grand-mother) were also on treatment for depression. Suicide of a parent was documented in three patients, and all had history of non-drug related self-harm. Hiremath et al in a large retrospective study described the significantly high rate of pre-existing mental illness in their adolescent cohort19.

Incidence of self-harm was seen to be higher in females, possibly due to the high incidence of psychiatric disorders among girls compared to boys14. An international study across seven European countries showed the female cohorts shared similarities in reasonable aspects20. Graber et al postulated that puberty might be a plausible explanation for the high incidence of self-harm in adolescents21. Puberty might cause lack of synchrony between age and cognitive development and consequently place them at risk of self-harm.

Over the counter medications are the commonest agents used by young people to harm themselves. Our study depicted paracetamol as the first on the list, followed by other NSAIDs before benzodiazepines. The large Australian study showed the common agents of OD to be paracetamol, NSAIDs and SSRI in descending order19.

To the best of our knowledge, this is the first study in Ireland that has specifically evaluated the presentations and preceding factors of OD in adolescents seen in Paediatric settings. The limitations of this study could be ascribed to its small sample size and retrospective nature. However, the aim of this study was to highlight a pattern of probable triggers and underlying circumstances that may increase the risk of self-harm. Drug overdose as a means of self-harm is a strong predictor of suicide and premature deaths in adolescence and identifies a high-risk group for targeted secondary prevention. Gender differences may be considered in the assessment, prevention, and management of future self-harm or suicides by community policy-makers and clinicians.