Aim
The aim of this study is to outline the role of primary external ventricular drains (EVD) in the management of open myelomeningoceles in the neonatal setting in Ireland.
Methods
Retrospective cohort study involving all infants who underwent open myelomeningocele repair in a teritary centre in Ireland between January 2009 and April 2016. Medical charts and laboratory data was reviewed on all infants meeting the inclusion criteria.
Results
One hundred and forty-three neonates underwent open myelomeningocele repair in the 6.5 year period. EVD were inserted at the time of primary wound closure in 19 cases (13%).  EVD were used to aid in wound closure and as a primary method of cerebrospinal fluid (CSF) diversion. They remained in place for a median of 8 days, ranging from 1-22 days.  All EVD, apart from one, in our series were replaced by a ventricular-peritoneal (VP) shunt at some stage.
Conclusion
EVD were used in 13% of cases of open myelomeningocele repairs from Jan 2009-Apr 2016 as a primary measure to aid in management.  Compared to the cohort in whom an EVD was not inserted at the time of surgery, there was a decrease in the rate of infections.  However, there was an increased rate of wound dehiscence/leak and a later need for VP shunt insertion.

Introduction
Ireland has one of the highest rates of neural tube defects in the world, an incidence of 1.17/1000 live births1. Temple Street Children’s University Hospital (TSCUH) is the national paediatric neurosurgical centre in Ireland. The use of EVD in the surgical management of open myelomeningocele repair has become more frequent in recent times. EVD are used as a temporary measure to aid in wound closure and as a primary measure of CSF diversion in management of hydrocephalus.  The catheter used in TSCUH for EVD insertion is a Bactiseal EVD Catheter - soft, flexible, pliable silicone catheter that is dual coated with antibiotics. Hydrocephalus is a common complication of myelomeningoceles and progressive hydrocephalus can lead to wound leakage and an increased risk of infections, including meningitis, wound infections and VP shunt infections2.

The decision to insert an EVD at the same time as primary closure takes many factors into consideration.  One must consider the size of the open myelomeningocele lesion, pre-operative head circumference status and ventricular size on ultrasound.  The ventricular size on ultrasound is measured by means of ‘Ventricular Index’ (VI). The VI is defined as the distance between the flax and the lateral wall of the anterior horn in the coronal plane, obtained by cranial ultrasound3. Brouwer et al developed a cross-sectional reference curve for VI based on gestational age2. A cranial ultrasound forms part of the work up for a neonate with spina bifida, however this may not be performed prior to surgery and therefore VI is not widely used in determining the need for EVD insertion.

The aim of this study was to assess the outcome of EVD insertion as a primary measure of CSF diversion in spina bifida in the management of hydrocephalus.

Methods
This was a retrospective cohort study looking at the outcome of EVD insertion as a primary measure of CSF diversion as part of the management of hydrocephalus in open myelomeningoceles in TSCUH over a six and half year period (January 2009 to April 2016). Medical charts and computerized laboratory data was reviewed on all infants who underwent surgical repair of an open myelomeningocele under the shared care of the neonatal and neurosurgical team during this time period.  Children were excluded from the study if they didn’t undergo surgical repair in the neonatal period and those who had an EVD inserted with an alternative diagnosis other than spina bifida.  The neonatal period was defined as ‘the first 28 days after delivery’. Data was inputted into an electronic database and analysed using descriptive methods. 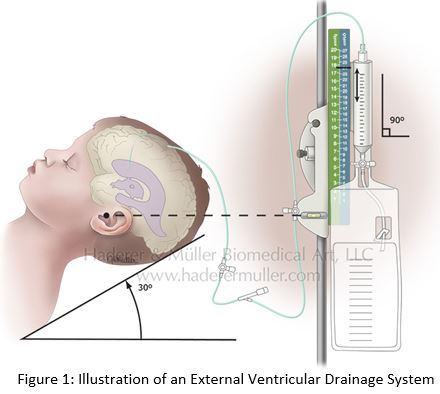 Results
One hundred and forty-three neonates underwent surgical repair of an open myelomeningocele in TSCUH in the 6 ½ year period, with an EVD inserted at the time of primary surgical closure in 19 cases (13%). Table 1 below highlights the baseline demographics of each group. Table 1: Baseline Demographics between each group:

Table 2 compares the outcome between the two cohorts including insertion of VP shunt, wound leakage/dehiscence and infection rates:

In nineteen cases (13%), an EVD was inserted as a primary measure for CSF diversion at the time of surgical myelomeningocele repair.  The median length of time an EVD remained in use was 7 days, ranging from 1 to 22 days.  EVDs were removed once the surgical wound had healed. Head circumference measurements prior to surgery were only available in 13/19 cases (68%).  The median head circumference recorded was 36cm, ranging from 33cm-46cm.

Eighteen out of nineteen EVDs in our series were replaced by a VP shunt.  In 77% of these cases, a VP shunt was placed immediately following EVD removal.  Insertion of a VP shunt requires a further surgery and general anesthesia for the neonate.  In comparison to the cohort without a primary EVD insertion, a VP shunt was inserted in 75% of cases, majority of these placed at varying times after initial wound closure.

All children with an EVD in situ had ml-for-ml replacement of CSF fluid losses with 0.9% sodium chloride via an intravenous cannula.  However, despite this, a third of the children (6 cases) developed hyponatremia.  Hyponatremia is defined as a sodium level less than 133mmol/L4.  All babies were asymptomatic and hyponatremia resolved in all cases.

Discussion
External Ventricular Drains were inserted in 13% of cases, in the 6 year time period, at the same time as primary myelomeningocele closure as a primary method of CSF diversion in the management of hydrocephalus, a common potential complication in spina bifida patients.  EVD is a method of externally draining excess CSF fluid from the ventricles. As mentioned previously in this article, there are many factors to consider before inserting an EVD, including size of the open myelomeningocele, pre-operative OFC status and VI on ultrasound. In our cohort with EVD, the median VI was greater than the cohort without EVD insertion which may have influenced the decision for EVD insertion. However, this measurement may not always be available pre-operatively so therefore is not used in all cases of EVD insertion.

Insertion of an EVD at the time of surgical repair aims to prevent hydrocephalus and its associated complications.  In comparing the two cohorts outlined, the cohort where an EVD was inserted, there was a decreased rate of infections (10%) compared to the cohort without EVD inserted (25%). The EVD device used in TSCUH is coated with antibiotics to help in preventing catheter-associated infections.  There are limited numbers of studies on the infection rates associated with EVD, which quote infection rate of between 6-9%5,6.  Longer EVD duration and higher outputs can be associated with EVD infections5.  There was one case of EVD infection in our cohort of patients.

EVDs have become more widely used in the management of open myelomeningocele repairs in recent times.  However, the use of EVD carries some potential risks.  Asymptomatic hyponatremia occurred in a third of cases where an EVD was inserted despite prophylactic treatment for CSF losses with 0.9% sodium chloride intravenous fluids.  Hyponatremia can contribute to neurological morbidity in a sick neonate, and chronic hyponatremia is associated with poor skeletal growth and neurodevelopmental outcome4.

EVD is only a temporary measure to externally drain CSF fluid from the ventricles. In our cohort, 95% of babies who had an EVD inserted later required insertion of a VP shunt compared to 75% of babies in the cohort without a primary EVD.  Therefore requiring a second general anaesthetic in a group of already high-risk patients.  However one must remember than the cohort with an EVD inserted often have increased chances of developing complications, given their higher lesions and increased VI, and therefore may theoretically have benefitted from an EVD being inserted primarily at the time of surgery.

In conclusion, EVD were inserted as a primary method of CSF diversion in 19 cases (13%).  In the cohort where an EVD was inserted at the same time as myelomeningocele repair, there were fewer cases of reported infections and meningitis and less VP shunt infections compared to the cohort were an EVD was not inserted at primary repair.   However, there were more cases of wound leakage and dehiscence requiring resuturing of the wound in the EVD cohort.  In this cohort where an EVD was primarily inserted, 95% of cases had a VP shunt inserted at some stage after EVD removal.  Thus, while EVD insertion has become more widely used in recent years, one must consider the potential risks associated with these devices.

Conflict of Interest Statement
There are no conflicts of interest to declare.