In developed countries, caesarean section (CS) rates continue to escalate and in Ireland nearly one in three women are now delivered by CS. The purpose of this study was to compare the management of women after one previous CS in two large Dublin maternity hospitals with the management in two other well-resourced countries. Data were analysed for Dublin, Massachusetts in the United States, and Hesse in Germany. It was found that since 1990, the CS rate in Dublin has increased by much more than in the other areas. This increase may be explained by the precipitous fall in the vaginal birth after CS rate because the rates in Massachusetts and Hesse in 1990 were initially much lower. Changes in the clinical management of women with one previous CS are a major contributor to the rising CS rates and are likely to be an ongoing driver of CS rates unless clinical practices evolve.

A feature of contemporary obstetrics has been the continuing escalation of caesarean section (CS) rates in developed countries. While many explanations have been advanced, American studies have shown that a key factor has been changes in the management of women with one previous CS leading to an increase in the number of women having a planned repeat CS and a decrease in the number of women having a trial of labour after CS (TOLAC)1, 2. After an initiative by National Institute of Health (NIH), the vaginal birth after CS (VBAC) rates in the United States (US) peaked at 28.3% in 19963,4. However, after a series of landmark publications highlighting the risks of VBAC, including increased uterine rupture rates, VBAC rates plummeted to 8.3% in 20075-8. The decline in VBAC rates in the US were due predominantly to an increase in planned CS because the rates of VBAC remain high in the small number of women allowed a TOLAC. A further NIH Consensus Development Conference in 2010 concluded that TOLAC remained a reasonable birth option for women with a previous CS9. Since 2010 there has been a slight increase in VBAC rates in the US with a reported rate in 2014 of 11.3%8.

In Ireland, CS rates have also escalated and the national rate is near the average in the wealthy OECD countries. In the capital city Dublin, maternity services are centralised into three large tertiary maternity hospitals each delivering more than 8,000 mothers per annum. Two of the hospitals, the Coombe Women and Infants University Hospital (CWIUH) and the National Maternity Hospital (NMH) have had a longstanding policy of encouraging VBAC, yet their CS rates, both overall and for those with previous scars, have also risen10-13. The purpose of this study was to examine recent trends in VBAC in these hospitals and to compare these trends with other developed countries.

Both Dublin hospitals are funded by the state but income is also generated from women who choose to pay for their treatment privately, either through private health insurance or out-of-pocket. The hospitals are governed under 19th century Royal Charters, and the Chief Executive is a consultant obstetrician and gynaecologist who is elected as the Master for a seven year term. The Master has overall responsibility for implementing clinical policies and is obliged to publish an Annual Clinical Report for submission to the Hospital Board and for dissemination nationally and internationally.

Both hospitals provide medical and midwifery undergraduate and postgraduate training and deliver active research programmes. Both have trainees in obstetrics, anaesthetics, and neonatology on duty in the hospital 24 hours a day with senior specialist cover immediately available either in the hospital or from home. The hospitals are stand-alone maternity units but have well developed care pathways for the critically ill patient to a nearby acute general hospital. In the delivery suite, active management of labour is practised with the use of colour-coded partograms and clinical guidelines11-13.

Clinical data were retrieved from the published Annual Reports from both hospitals from 1990-2014 and in some instances data were supplemented with data received directly from the hospitals 12, 13. The available data for the two hospitals have been aggregated in the analyses to present a figure for 'Dublin'.

The CS rate by OECD country over time (2001, 2007, 2013) in order of their CS rate lowest of highest in 2001 is presented in Figure 114-16. As national data for the US is not available, data for Massachusetts has been included here. Countries were included if two or more time points were available for comparison. Of the 21 countries included, 19 experienced an increase in the CS rate over the period under consideration.

International CS and VBAC data from the United States (US) and Germany were also analysed. Due to the lack of availability of comparable national statistics from the US from 2003 onwards, the CS and VBAC rates for Massachusetts from 1990-2014 were obtained. The state has a similar number of births per year to Ireland and the CS and VBAC trends appear to mirror, where available, sub-national trends. For Germany, the only available data were from a population based study which has published CS and VBAC rates for over 1.2 million deliveries in the state of Hesse, which includes the city of Frankfurt am Main, between 1990-2012.17 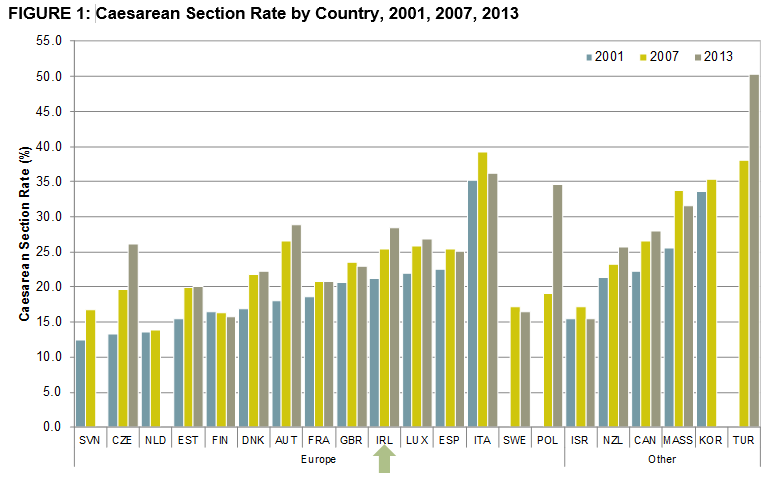 Figures 2, 3, and 4 presents the VBAC and CS rates for the three areas under consideration; Massachusetts, Hesse, and Dublin12,13,16,17. Literature milestones in the area of VBAC are highlighted according to year of publication5,7,19.

VBAC rates from 1990-2012/4 are also presented. The VBAC rate in Dublin decreased from a high over the period of 64.4% in 1990 to its lowest rate of 32.9% in 2014. A similar decreasing pattern is observed in Hesse albeit starting at a lower rate in 1990 (47.9%). The pattern observed in Massachusetts is quite different as, unlike the other two areas, for the first 7 years of the period the VBAC rate is seen to be increasing until 1996 after which there is steady fall off until 2012 when the rate increased slightly.

This epidemiological study over three decades from two of the largest maternity hospitals in Europe found that the steady increase in the overall CS rate was strongly associated with a major decrease in the incidence of VBAC. This trend was similar to those in the United States and in Germany but because the baseline VBAC rates were initially higher in Dublin, the changes in obstetric practice have had a greater impact on overall CS rates in Dublin. As the customary practice is to plan for a repeat CS electively at 39 weeks gestation in women with two previous CS, the impact of the declining VBAC rate may reverberate through a woman's future pregnancies.

When the changes in the VBAC rate are observed in conjunction with the major literature milestones, it appears that US hospitals were faster to respond to the latest evidence in the literature. The large decrease in VBAC rates between 1996 and 2014 likely reflects a reaction to the publication of the body of literature highlighting the risks of VBAC and, in contrast, the increase VBAC rate from 2012 in Massachusetts onwards may be as a consequence of the NIH Consensus Development Conference in 2010. The rates in Dublin do not show evidence of the recent increase in Massachusetts.

A strength of this study is that it is based on two large hospital databases and Annual Clinical Reports which are a longstanding feature of maternity care in our capital city. They are also supplemented by a comprehensive National Perinatal Reporting System19. A weakness of the study is that we do not have patient level information about the factors influencing the mode of delivery in individual cases.

There is a consensus that planned VBAC is a clinically safe choice for the majority of women with a single previous lower segment CS3,9,20,21. A number of evidence based clinical guidelines have been developed nationally which detail how maternal and fetal risk can be optimised by carefully balancing the risk and benefits of encouraging VBAC20-22. The epidemiological trends suggest that the VBAC rates in Dublin, Massachusetts and Hesse have been influenced by the landmark papers in the high-impact New England Journal of Medicine highlighting the risks of VBAC. It is perhaps not surprising that these papers had an earlier impact in New England than in Europe.

There are also economic as well as clinical implications to the decline in VBAC rates. CS is associated with longer average length of stay than vaginal delivery. In 2014, patients with non-instrumental vaginal deliveries in Irish hospitals had a mean length of stay of 2.5 days for a singleton delivery compared to 4.7 days for an elective CS and 5.5 days for an emergency CS19. The longer lengths of stay and resource use for CS deliveries has been shown to substantially increase costs compared to VBAC20, 23.

One of the clinical concerns about VBAC is the risk of uterine rupture10, 21. However, the decrease in VBAC rates in Dublin has had little impact on uterine rupture rates which may be attributable to the low baseline rates associated with strict local guidelines on a trial of labour and the administration of oxytocin in women with a previous CS11-13.

It is likely that the findings in our two hospitals mirror those in the other 17 maternity units nationally and in other European countries24. We recommend that a European Consensus Conference, modelled on that of NIH, is required to restore the confidence of healthcare professionals and pregnant women that VBAC rates in Europe can be increased with the cautious implementation of clinical guidelines without increasing the clinical risk to the woman and her baby22. We also recommend that all maternity units in the country analyse their CS rates and obstetric outcomes using the Robson Groups which means that VBAC rates and any associated complications, such as uterine rupture, can be tracked over time to ensure clinical risks are optimised25.

Health Research Board (grant number HRA_HSR/2012/8). The study sponsor, had no role in study design; analysis and interpretation of the data; in the writing of the report; and in the decision to submit the paper for publication. All of the researchers are independent from the funders.