The Special Type Consultation (STC) scheme is a fee-for-service reimbursement scheme for General Practitioners (GPs) in Ireland. Introduced in 1989, the scheme includes specified patient services involving the application of a learned skill, e.g. suturing. This study aims to establish the extent to which GPs believe this scheme is appropriate for current General Practice. This is an embedded mixed-methods study combining quantitative data on GPs working experience of and qualitative data on GPs attitudes towards the scheme. Data were collected by means of an anonymous postal questionnaire. The response rate was 60.4% (n=159.) Twenty-nine percent (n=46) disagreed and 65% (n=104) strongly disagreed that the current list of special items is satisfactory. Two overriding themes were identified: economics and advancement of the STC process. This study demonstrates an overwhelming consensus among GPs that the current STC scheme is outdated and in urgent need of revision to reflect modern General Practice.

In Ireland, payment of GPs for primary care services provided to public patients is primarily from General Medical Services (GMS) capitation-based payments. Additional remuneration for the provision of care to public patients is made to GPs under various contracts, one of which is called the Special Type Consultation (STC) reimbursement scheme. Whilst this STC scheme is unique to Ireland, internationally many different formats exist for GP reimbursement including salaried, capitation and fee-for-service reimbursement. Some health sectors incorporate multiple methods within a payment system. In Denmark for example, GPs are paid by a mixture of per-capita payment and fees for services with approximately one third of a GP's income originating from capitation payment and two-thirds arising from fee-for-service payments1.  Similarly, the UK’s National Health Services (NHS) system incorporates a number of reimbursement systems including capitation, fee-for-service and performance related pay. The NHS payment system was revised in 2004 and major reforms were introduced, including an opt-in “treat to target” method of payment for performance component, e.g. meeting targets in diabetic patients’ etc2.

In contrast, both the Australian and Canadian healthcare system predominantly operate on a fee-for-servicepayment system.  In Australia, the 'Medicare' fee per item healthcare system is funded by a 1.5% health tax levy contributed to by middle or higher income earners and an additional 1% levy imposed on those in higher income brackets.3,4 Whilst in Canada, the predominant form of remuneration is a fee-for-service payment which accounts for approximately 71% of total clinical payments5.

Each of these methods of reimbursement possess their own unique advantages and disadvantages.  Salaried payment systems encourage increased focus on health promotion, whilst potential negative aspects include poor service and low productivity6. In contrast, capitation based approaches assist with reducing the volume of unnecessary care7. Fee-for-service systems allow for the increased provision of quality care but can, on occasions, result in more unnecessary care8. Interestingly, these disadvantages associated with fee- for- service systems are not unique to the medical profession.  A Canadian study on fee-per-item remuneration in dentists has also shown that while it incentivises overall increased service provision, it offers no incentive to allocate services efficiently or in accordance with greatest patient need9. In Ireland, the GMS scheme was introduced into General Practice in 1972. It commenced initially as an exclusive fee-per-item contract. This was changed to a capitation payment based system in 1989 with additional payments for STCs10. Despite the many advances in modern day medicine, the list of services on the STC contract has not been updated or revised since 1989.

The procedures listed within the STC contract consist of an inventory of services that require intervention by the GP, i.e., involves application of a learned skill. These consultations are usually of a longer duration than routine consultations. Examples include inserting a urinary catheter and suturing a laceration (Fig 1). The STC reimbursement process is relatively straightforward.  Firstly, the form must be completed to include the patient’s name, GMS number, the STC code being claimed, date of claim, and time of claim if it is performed outside of normal surgery opening hours. The patient is asked to sign the form to verify that the consultation took place (Fig 2). Forms are then forwarded to the Primary Care Reimbursement Service (PCRS) whereby they are approved or disapproved for reimbursement.

This is an embedded, mixed-methods, cross-sectional observational study11.This study design allows for the collection and analysis of both quantitative and qualitative data within a traditional qualitative or quantitative research design. It targeted GPs in counties Galway, Mayo and Roscommon. Participants were identified from the HSE list of GPs currently subscribed to the under-six contract. A total of 263 GPs were included. Data was collected by means of an anonymous postal questionnaire which included a participant information leaflet, consent form and a stamped addressed envelope. Ethical approval was obtained from the ICGP ethics committee.

The questionnaire was composed of three sections; Section A collected demographic information. Section B collected data on GP’s working experience of the STC scheme via tick box responses. Section C included qualitative free text comment boxes and focused on GPs attitudes towards the STC process. It offered GPs the opportunity to contribute suggestions regarding potential modifications, and revisions that could be introduced to improve this scheme.

To help ensure reflexivity the researchers were sensitive to and mindful of their own standpoint with respect to the STC scheme at the outset and took steps help ensure that this did not influence the design of the questionnaire and analysis of data. The questionnaire was piloted with six GPs. In terms of data analysis and reporting with respect to fair dealing, care was taken not to over-emphasise the views of any one group of participants12. Quantitative data were analysed in Microsoft Excel. Qualitative data were analysed by Braun and Clarke’s six phases of thematic analysis13.

Quantitative data: 159 valid consent forms were returned (response rate 60.4 %.) Regarding age; 32% of respondents were between 30-44 years (n=51), 40% were aged 45-60 years (n=63) while 28% were over 60 years old (n=44.) Practice type included: 61% group practices (n=97), 33% single handed (n=53) and 6% primary care centres (n=6). Respondents self-classified their practice types as urban 25% (n=40), rural 31.5% (n=50) and mixed 43.5% (n=69.) Eighty-five percent (n=135) of GPs submitted their STC reimbursement application forms online. In relation to the current list of special items of service, 29% (n=46) disagreed and 65% (n=104) strongly disagreed that this list is satisfactory (Fig 3.) Eighty-four percent (n=134) of GPs strongly agreed and 11% (n=18) agreed that the current STC payment structure should be considered for revision and modernisation (Fig 4). With reference to future contracts, 75% (n=119) of respondents strongly agreed, while 13% (n=20) agreed that the current STC payment structure should form part of future GP contracts. Respondents indicated how often they performed each of the procedures on the STC by selecting frequently (at least once per week), sometimes (at least once per month), rarely (at least once per year) or never. Ninety-two percent (n=147) of GPs have performed nebulisation in the last month, 92% (n=147) performed cryotherapy, while 93% performed and interpreted an ECG in the last month of practice. In direct contrast, only 6.3% (n=10) of respondents reported performing “Recognised Vein Treatment” in the last month, with 91% (n=144) reporting that they have never delivered this service. Eighty-four percent (n=133) reported they had rarely or never fitted a diaphragm. Eighty-six percent (n=136) had rarely or never drained a hydrocele. Interestingly, GPs were split almost 50:50 regarding whether they find the form user-friendly. 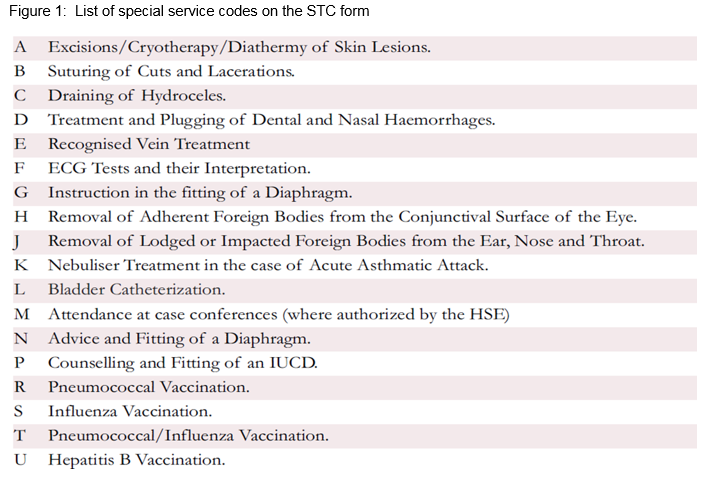 Qualitative data: Twenty-four hour blood pressure monitoring was the most frequently listed service which GP’s felt should be reimbursable on a fee-per-item basis. This was closely followed by warfarin management, phlebotomy, Implanon insertion, joint injections, pulmonary function tests and house calls. Two overriding themes were identified from the free text responses, namely economics and advancement of the STC process. Regarding economics, there was widespread concern that the level of reimbursement was insufficient for the time and level of skill required to perform an STC-“the amounts paid are a joke”-(GP 73.) GPs strongly voiced their concerns regarding the high cost of medical equipment used in the STC- “fees are insufficient to cover expenses of procedures”-(GP 68.) In particular, many of them singled out disposable suturing materials as being especially expensive. 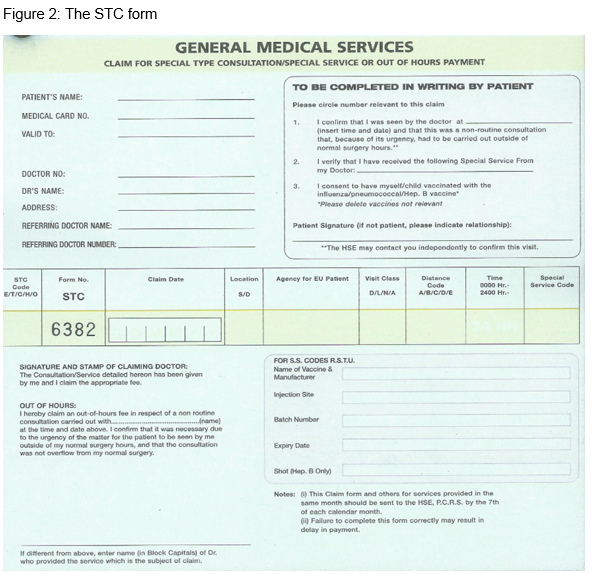 Furthermore, a number of GPs expressed dissatisfaction with the out-of-hours consultation fee. One doctor proposed that “out-of-hours cases should be paid at an hourly rate, not just an STC”- (GP 128.) Some respondents also highlighted house calls as an issue with one recommending that house calls during working hours be included for reimbursement on a fee per item basis and suggested that this would “reduce the amount of ambulance call outs during the day”- (GP 47). 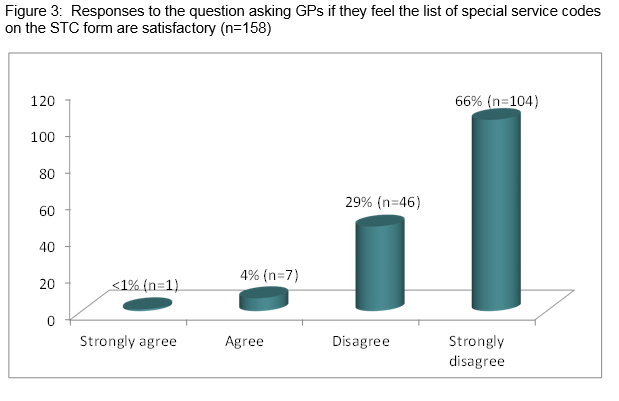 Regarding advancement of the STC process, a number of the respondents who felt the form was not user-friendly suggested that the form could be improved by simplifying it, e.g. GP 153 pointed out “there is too much text.” A small number of GPs were disgruntled with the PCRS process with one pointing out that “they are frequently rejected for very minor errors”- (GP 17.) There was unanimous agreement that the list of services on the form was “completely outdated” (GP 68), with a few respondents highlighting diaphragm insertion as an especially outdated service. 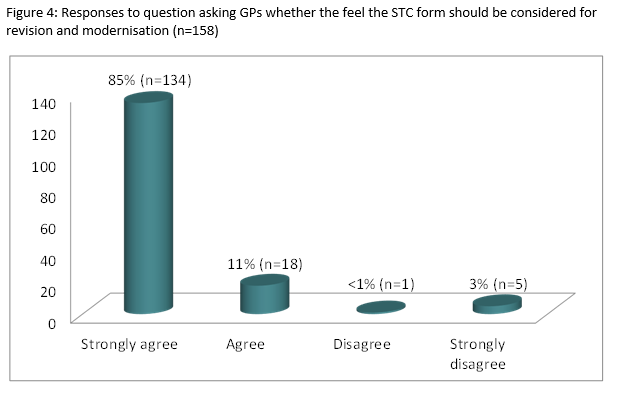 To our knowledge this is the first published research to establish GP’s views on the STC reimbursement scheme. As key stakeholders in the provision of primary care in Ireland, this study shows that GPs have strong opinions in relation to service provision and remuneration. The STC scheme is unique to the Irish healthcare system, however it compares to fee-for-service reimbursement structures used in the UK, Denmark and Canada as outlined above.

Studies in the UK comparing different remuneration systems in primary care concluded that fee-for-service systems are poor for cost controls at the primary care level but good for cost controls at secondary level. GPs are paid for providing services at the primary level rather than making referrals to secondary care. Hence they are good gatekeepers. It was also found that activity-based remuneration systems appear to improve efficiency which may explain the performance related ‘treat-to-target’ component of remuneration in the UK14.

The main strengths of our study included the high response rate (60.4%) attesting to GPs’ interest in this issue. In addition, the mixed methods study design ensured that a fuller understanding of GPs’ views was procured.  Furthermore, GP demographic details obtained in this study mirror recently published figures15. This national study demonstrated similar figures for practice settings; urban (25%), rural (21%) and mixed (37%), and also comparable figures for practice types; group practice (82%) and single practice (18%.) This demonstrates the generalisability of this provincial research nationally.

With regard to limitations of this study, we acknowledge that by using the under-six contract as our recruitment tool, we have excluded GPs who work as assistants in General Practice. Their opinions would be valuable as many of them are the GPs of the future.

In conclusion, this study demonstrates an overwhelming consensus among GPs that the current STC Reimbursement scheme is outdated and in need of revision to reflect modern General Practice. STC activity is very important to most practices. It incentivises GPs to allocate services efficiently and appropriately. It resources them in their provision of specialised and skilled services to patients in primary care. This in turn, prevents the referral of minor issues to secondary care which results in significant savings for the Department of Health16. A practicable and up-to-date item of service remuneration structure would direct and incentivise GPs to provide appropriate and necessary services to patients that reflect updated and current evidence based primary care guidelines.

There are no conflicts of interest with regard to this study.